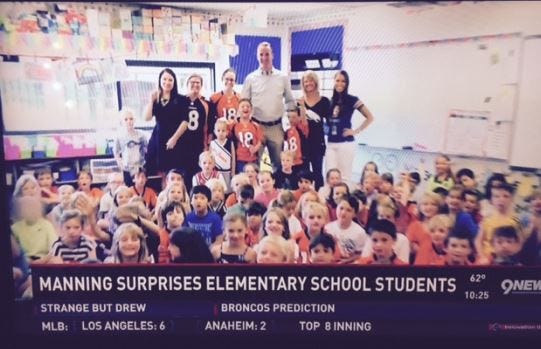 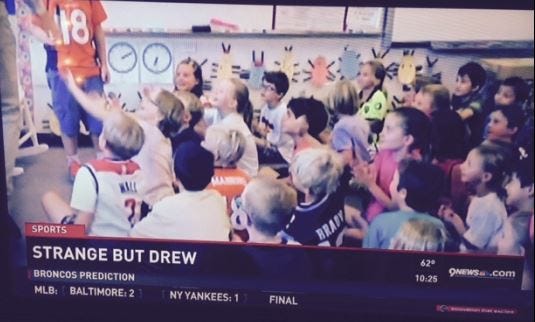 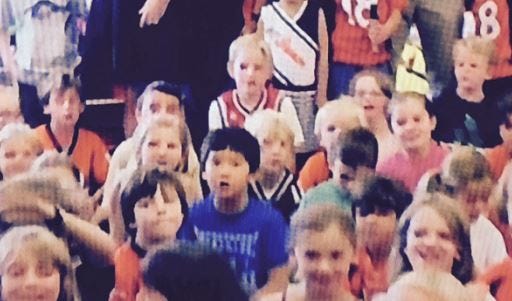 So I’m watching 9News in Denver last night, and a story comes on about some father having won an auction to have Peyton Manning appear to give a talk somewhere, and he picks his kid’s second grade class. A Pretty cool dad-move right there if you are a Bronco’s fan, I guess.

But, look a little more closely and there is a little blond kid there, blowing up his Brady jersey right in ole Pey Pey’s face. It’s just so perfect!

Not only does that kid kick ass, but so do his parents for letting him wear it that day… They knew he was gonna catch some shit from all the ball-washing Peyton fans (teachers, principal, parents, other kids), and they still let him do it. Awesome! Represent! Proud to be part of the Pats Nation!

Love this kid. Put him on the fucking Wall. Just such a power move for him to wear a Brady shirt right in Manning’s ugly mug. I can’t even imagine how giddy the dad must have been too. Just bragging to all his buddies all day long about what was happening. I almost feel bad for Peyton. Guy just can’t escape Brady’s shadow. Like he tries to do something nice here only to get emasculated by 2nd grade blonde kid. Same thing with Deflategate. It had nothing to do with him, but his name got dragged through the mud with Brady and all his people making fun of what a washed up bum he is. Everywhere he goes he must be haunted by TB12. Horrible way to go through life.