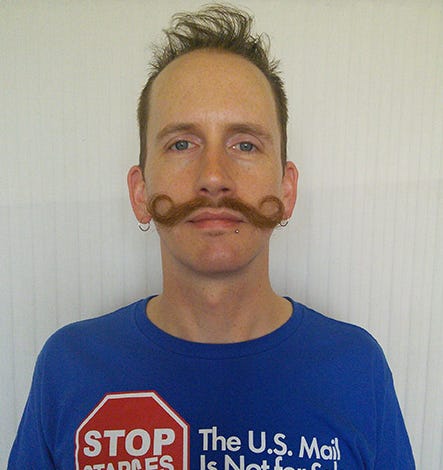 SFist - The man police believe was responsible for $2,000 in damages to a Zipcar in this road rage incident during a Critical Mass event in the Marina last month has been found. As the SFPD reports in a press release, on Saturday they arrested one Ian Hespelt, 39, of San Francisco and charged him with vandalism, false imprisonment, assault with a deadly weapon, and maliciously and willfully throwing a substance at a vehicle. Officers were on bike patrol in the vicinity of AT&T Park during the Billy Joel concert when they say they recognized Hespelt and his bike from the infamous YouTube video from August 28, which has since gone viral. Also, ABC 7 reports that Hespelt has a felony warrant out of Washington State on drug charges. They also report that the female victim whose Zipcar took the brunt of Hespelt’s rage ID’d him in a photo lineup.

The worst human being in the world, ladies and gentleman. Why do stereotypes exist? Because this man exists. A walking, talking stereotype. He has every feature of the most hatable person on the planet. The hair that has receded back to Narnia, the hoop earrings, the mustache, the fucking lip piercing, the anti-Staples shirt…wait what? People are anti-Staples? I’m just shocked Staples is still a thing. Good for them. Amazon will put them out of business eventually, but I’m glad they’re still around. And then the bike riding video. Just rides his bike into oncoming traffic like he owns the place. Good fucking lord I hate him. He is why everyone hates cyclists. It’s bad enough we have to share a road with them, but they don’t obey basic traffic laws, and then get pissy when people give them a hard time. Yea bro, because at any given moment you could do something stupid and I’m on the hook for manslaughter. So fuck this guy. And props to the driver of the car for not putting up with his bullshit. Every single time a hipster asshole blocks the road, we need the cars to just keep inching forward. The pussies in the road always move out of the way. Every time. And if you have to run over someone’s foot/leg/head/body/brains, so be it.