The Guardian – The band Survivor has objected to the use of its song Eye of the Tiger during a rally celebrating the release of Rowan county clerk Kim Davis, who was jailed for six days after refusing to issue marriage licenses to same-sex couples.

“NO! We did not grant Kim Davis any rights to use ‘My Tune -The Eye Of The Tiger,’” they wrote on their verified Facebook page on Tuesday.

“I would not grant her the rights to use Charmin! C’mom Mike, you are not The Donald but you can do better than that,” Survivor wrote on their Facebook page.

National Report – “They are well within their rights to hold a public rally in support of Kim Davis, or anyone else for that matter,” explains intellectual property attorney Paul W. Steiner. “Where they broke the law was when they played that song by Survivor without the permission of the rights holder.

“It is illegal for someone to ignore IP law and would make the offending parties guilty of infringement under Copyright Law (17 U.S.C. § 501(a)).”

Steiner alleges that he has already heard of the record company executives “taking exception” to the use of their intellectual property to “help a criminal grandstand in front of an audience”.

“Many times, a record company will look the other way in a situation like this, as it serves as free publicity for their intellectual property,” says Steiner. “Though, in this case, I believe that EMI does not want their song associated with someone like Kim Davis, or Mike Huckabee for that matter, and will most likely seek full damages for this incident.”

I don’t want this to be some heavy political blog because this situation seems pretty cut and dry to me. Gay marriage is legal, Kim Davis is entitled to her beliefs but didn’t have to be a dick about it while working as an officer of the state (you don’t believe in it, explain that to a supervisor and don’t do it, anything else is needlessly shitty and attention whoring in my view), and she’s been disciplined for it. Survivor may try to get some headlines off of it and if she gets sued on top of the jail time, maybe it’s some sort of karmic payback but whatever, not really the point to me. The reason I want to blog about this is mostly because I’m in awe of everything around this Kim Davis situation. A Presidential candidate is raising this woman’s arms because she really hates gay people as she looks up to the heavens with her head back in jubilation while people wave paper crosses while “Eye of the Tiger” plays and that’s about as surreal of a situation it gets: 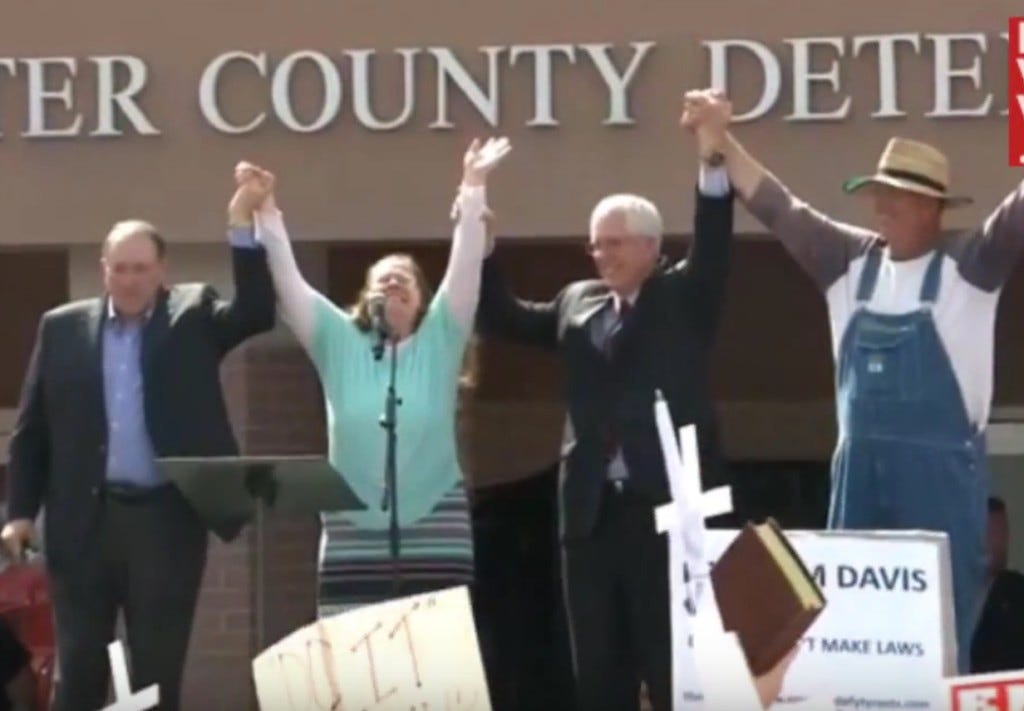 And that’s not even including her Hillbilly Jim-looking husband on the right who’s in full-on overalls and a straw hat WITH SOME SORT OF VISOR BUILT IN: 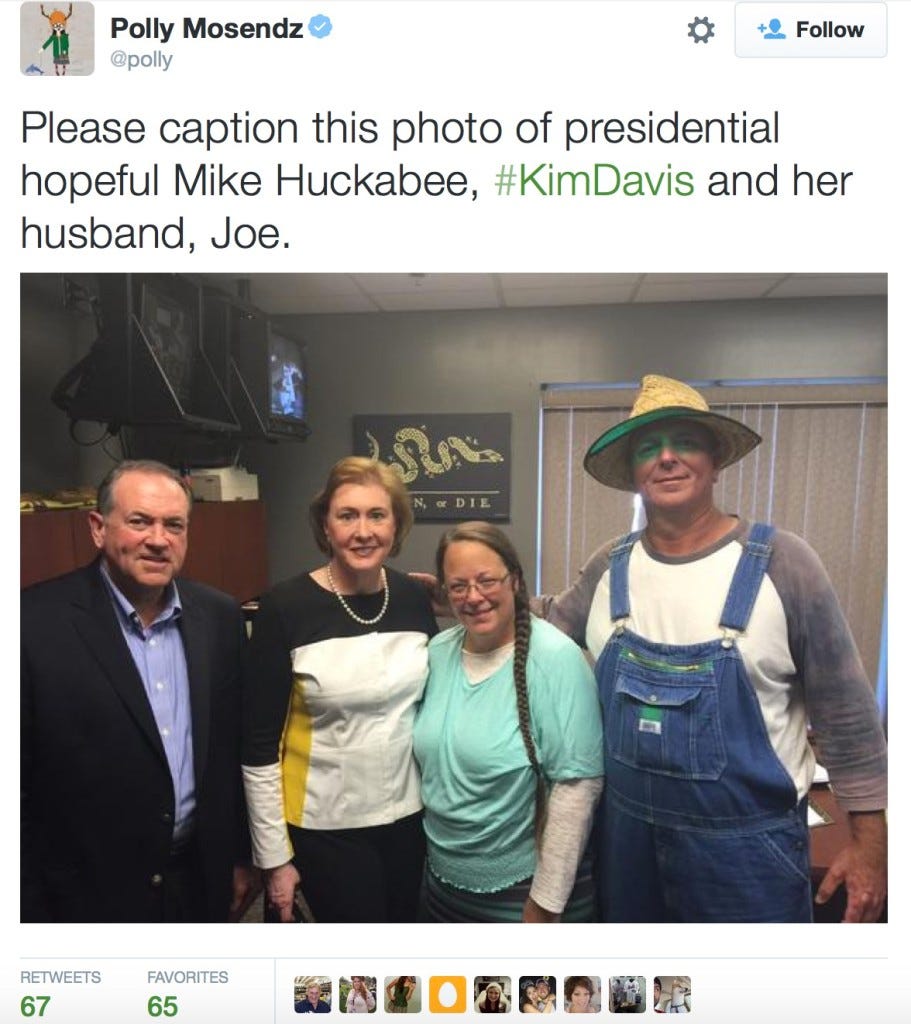 Such a squad. And add in the fact that like a thousand people come out to see this lady because she hates gays so hard and then got fully sucked in because Kim Davis seemingly received Hitler public speaking lessons from Michael Scott: 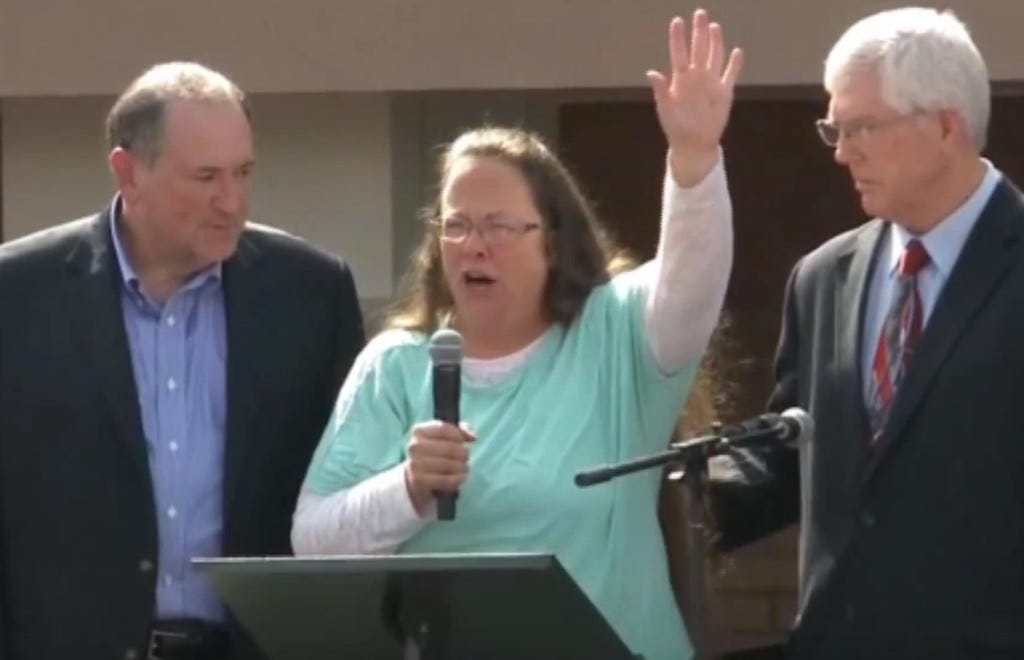 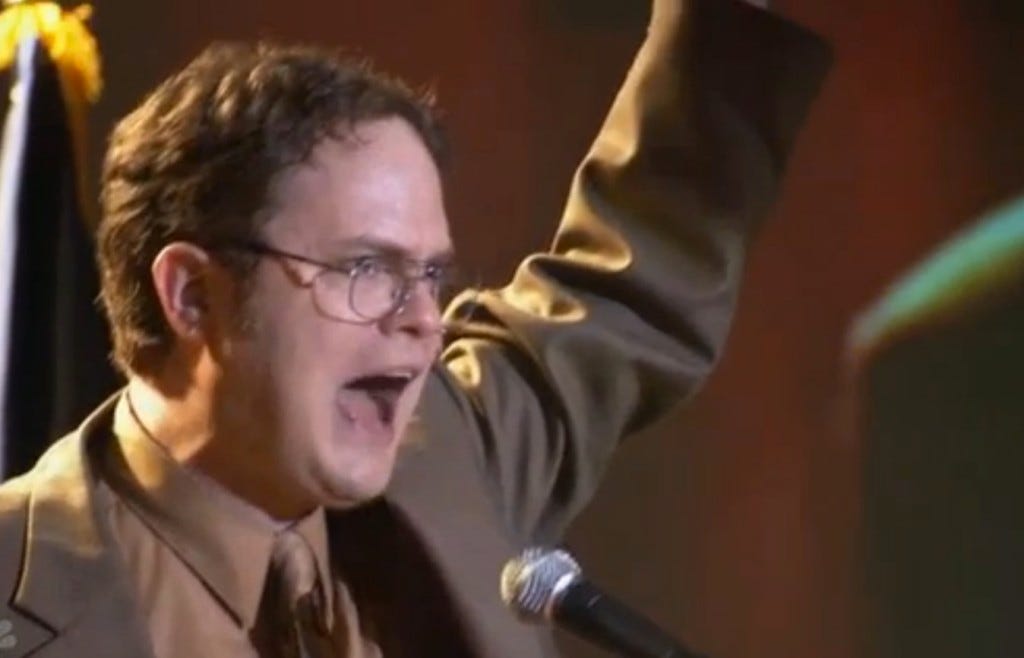 And then you throw in Survivor — SURVIVOR! — getting relevant again for being annoyed that this Mike Huckabee and this doughy mouth breather used it as their conquering anthem for the religious right and my god this Kim Davis story continues to be unreal. I need her to stay relevant for the next few months so these guys can trot her out to siphon some of her “fans” off her. There’s no reason she can’t be the Joe the Plumber of this election. Make her enter awkwardly to all sorts of 80s arena rock while perpetually angry people chant her name. If she’s in the spotlight a little longer, they’ll probably even try to give her a “makeover” to look more appealing to people out there like when they tried to make Susan Boyle less ugly when she blew up. Can you imagine? Our lives would all be richer for the experience.

Kim Davis, I may not agree with your politics, but keep doing you. You are a national treasure (inasmuch as you should probably be buried so deep under the Lincoln Memorial that only Nicolas Cage could find you).