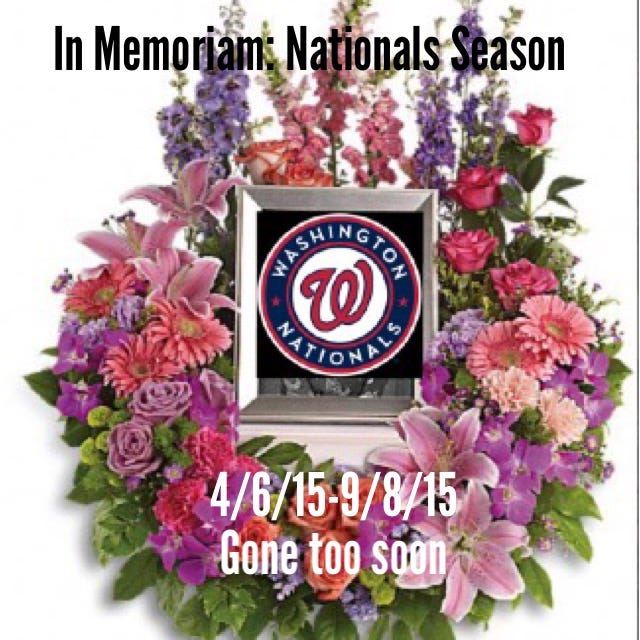 The Nationals season is over. Its all done. Bryce, if you thought fans leaving in the 7th was bad, now those fans just won’t show up. You guys blew it, you had so many opportunities throughout the season and just never delivered. The first two games of the Cardinals series stand out as heartwrenching losses but these past two games, where the Nationals had multi-run leads and blew them are just too much. And last night was the nail in the coffin. 6 run lead with 2 outs, and they couldn’t hold it. A complete meltdown, blowup, whatever you want to call it. Over a 98% chance to win the game and they walked into the dugout as losers. Two straight games vs the Mets given away and barring a miracle of mass proportions, that’ll be all she wrote for this club.

This team doesn’t have ‘it.’ We could point to an incompetent manager or several early injuries as factors but, at the end of the day, every team has injuries and every team has secondary weaknesses (like a bad manager) but 10 teams make the playoffs each year and the Nationals (despite being one of the 10 most talented teams) will not. 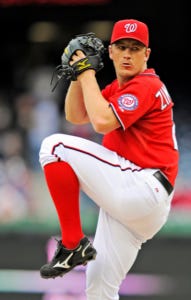 Next year should be better but by how much? I don’t think anyone knows. The Mets will field a rotation of Harvey, DeGrom, Snydergaard, Wheeler, and Matz for the entire season and can’t possibly be historically bad offensively for the first 3 months again. The Braves are not going be good but I doubt they’ll go 1-20 or whatever the fuck it was again. The Marlins are a joke of a franchise and at this point I think we can seriously wonder whether Jose Fernandez and Giancarlo Stanton are injury prone but they should have both of those stars on their opening day roster. The Phillies suck and will continue to suck.

This is still not a strong division but the Nationals were the consensus #1 team in the division back in March and April and that just isn’t the case anymore. Doug Fister and Denard Span will both leave as free agents though Fister is basically a non-factor or a negative factor as it is and Michael A Taylor is a fine replacement for Span. Ian Desmond has played much much better in the 2nd half but Trea Turner should be able to nail down the starting SS position (and, I know they won’t do it right now, but if things don’t improve in the next week, I’d love to see him start the final dozen or so games of the season). Jordan Zimmermann is the big free agent departure and, while Joe Ross is definitely a capable MLB starter, Zimm was a bonafide #2 and, judging by Ross’ recent outings, he just isn’t there yet. Minor leaguers Luc Giolito or Reynaldo Lopez could each be up at some point next year as well (I wonder how either of those guys would’ve fared if they were promoted into a relief role when rosters expanded?). What I’m saying is that the Nationals window of opportunity is FAR from over and there are several reasons to be optimistic about future years but 2015 was supposed to be our year, but injuries, bad managing, a bad bullpen, and an inconsistent rotation will keep them home in October.

I legitimately thought that this team would make the playoffs every single day of the season until yesterday and, even yesterday, I was still (overly) confident. Once the Mets tied it and then took the lead, I’d seen enough and turned off my TV but still, in the back of my mind, I was thinking about how good a metaphor for the season this game could be. In my mind, the first few innings were like the first few months of the season for the Nats: they were simply a better team than the Mets. But then the Mets would come back and take the lead late in the game only for the Nats to walk it off to end the game (season). Unfortunately, the game was a metaphor for the season, just not in the way that I imagined; instead of thundering alive and earning a come-from-behind victory, Papelbon gave up a HR and the bats sat on shoulders.