Phillies.com – Combine Brown’s numbers since the 2013 All-Star break, the fact that he is eligible for salary arbitration a second time and the fact that the Phillies might want to give a longer look next season to outfielders Aaron Altherr, Odubel Herrera, Cody Asche, Darnell Sweeney and others, and there is a strong possibility Brown is non-tendered and plays elsewhere next season. If only Brown had shown more flashes of his 2013 success. “I can do that at any time,” he said. “I just think I need to play every day. That’s up to me. Go out and play well. It’s a different philosophy here with how they handle things, but that’s all I know. Other teams might leave guys out there, but here you’ve got to perform. I understand that.”

Everyone, Philadelphia, in unison:

You really gotta be kidding me with this one. I’m not even go into the fact that IF YOU CAN PERFORM AT THAT HIGH OF A LEVEL WHY THE FUCK WON’T YOU DO SO ALL THE TIME?!?!?! But I digress, because Dominic Brown is, in fact, an idiot. Why even open up your mouth at this point…about anything? Like, there’s no point. Just shut your freaking mouth, underachieve as much as you can, and bum out the rest of the season to salvagle the least bit of dignity you have left. With the Phillies getting a record low 15K to come out and watch them struggle to breathe at CBP, we’re all going down on this ship together. At least make it as bearable as can be standing here listening to this guy belt out the chello on the deck. 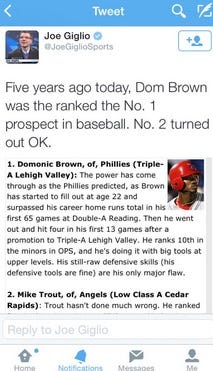