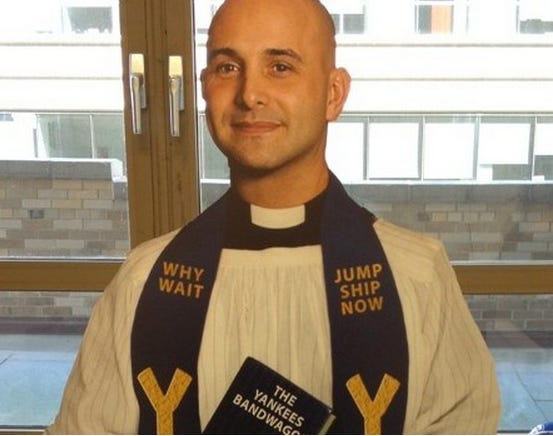 Every Labor Day since 2007 when the Boomer and Carton Morning Show began, Craig Carton has opened his church. Its a disgusting, vile congregation. Worse than the Westboro Baptist church. Worse than the hypocritical Jews For Jesus. Its the Mets Fans For Yankees. And while I’m not sure how many practicing members of the church there actually were, but when the calendar flipped to September and the Mets were out of it and the Yankees were gearing up for their run, that slimy slithering chameleon snake Craig Carton would change his skin to Pinstripes and begin rooting for the Bronx Bombers.

Well not this year, my friends. The Church is closed. The windows are boarded up. The doors are locked. The Mets Fans For Yankees are dead. To be honest if you were the type to root for the Yankees you are a scumbag of the highest order. And I mean that with all sincerity. If you’re a Mets fan who truly rooted for the Yankees at any point I hate you more than anything or anyone. You’re worse than people who leave their dogs inside a hot car on a 100 degree summer day. You’re worse than people who raise their kids gender neutral. You’re worse than Yankees/Patriots fans. Yea. I fucking said it.

And yea I know what you puppets are gonna say since you’re all simpletons and so predictable. “But KFC you’re always so negative about the Mets!” “KFC you never have any faith in the Mets! Whats the difference!” The difference is I go down with the ship every year. I stand there on the bow of the ship heading right for the iceberg and I ride it out. The women and children jumping on the lifeboats, paddling to safety with Craigy on the shores with his bullhorn – “METS FAAANS for Yank-EEES!” And me and the rest of the true Mets fans go down into the icy abyss. Thats what being a real fan is about. Its not all about constant optimism and always having faith the team will come through. Its not all about sunshine and rainbows. For Mets fans is about knowing somehow, at some point, even when it looks like you’re impenetrable, an iceberg can come the fuck out of nowhere and sink your whole ship. And when it does you go down with it and you die of hypothermia and fill your lungs with frigid ice water. Go ahead, Craigy. Go row to safety with the ladies and the little boys. I’ll be here when a fucking 60 pitch outing IN THE PLAYOFFS rips a whole in the side of our hull and we end up at the bottom of the marina in Flushing,