(Source) Northside ISD and the University Interscholastic League are looking into a play in which two Jay football players barreled into a referee during Friday night’s game against Marble Falls. Late in Jay’s 15-9 loss at Marble Falls, one defensive back ran from 7 yards away into the back of an official watching a run play unfold 9 yards in front of him.

After the referee’s fell to the turf after the first hit, another player standing to the right of the referee and several yards away led with his helmet and dove into the official. Both players were ejected. Northside ISD athletic director Stan Laing said the video was “very disturbing.” Laing said the district is investigating the sequence of events leading up to the pla, and the University Interscholastic League is aware of what happened. “The question of what instigated that is what we’re trying to figure out,” Laing said.

That’s assault, brotha! No seriously, that is the very definition of assault. Makes every person who has yelled at a ref look like an angel in comparison. Can’t imagine what has to go through your brain to reach the point where you’re like “yup, I’m going to run as fast as I can into the back of this ref and lay him out even though the play is 10 yards away” and then to have your buddy jump on top like he’s going for a fumble. Take it easy Texas, I mean I have no doubt the ref probably sucked but trying to murder a guy with a cheap shot in the back is just a little too far (it’s actually a lot too far).

Unrelated but sort of related, how about Andy Dalton in front of us last night holding the TCU Horned Frogs symbol throughout the entire National Anthem. Again, chill out, Texas, we all love football too. 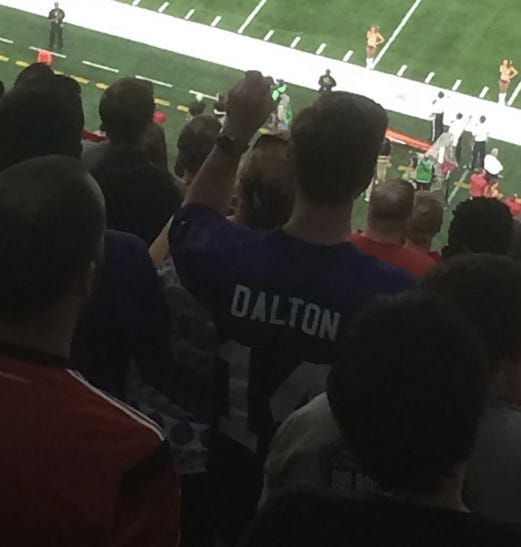