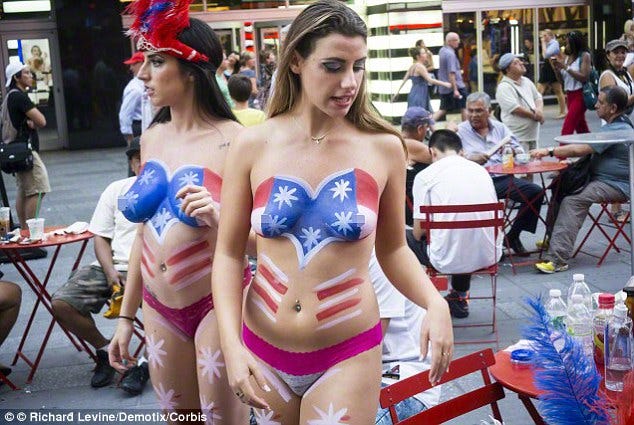 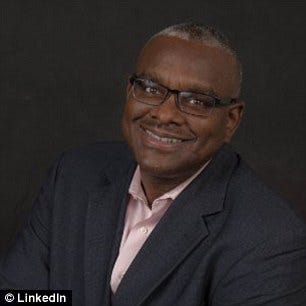 Daily Mail – A Bank of America executive has been arrested for allegedly assaulting two topless Times Square performers after accusing them of taking his wallet. Mark Walters, 46, reportedly took a picture with Lourdes Carrasquillo, 32, and Maria Ruiz, 20, outside a Sephora cosmetics store on Broadway. He realized his wallet was missing when he tried to tip them, reports the New York Post.   ‘He turns to one of the women and says ‘where’s my wallet? You took my wallet!’’ a law enforcement source told the outlet. Reports suggest Carrasquillo had nowhere on her body to hide the wallet. He then allegedly grabbed her by the hair and pulled her to the ground.  Ruiz, Carrasquillo’s roommate in the Bronx who also works at the Crossroads of the World, then tried to intervene. But Walters, from Charlotte in North Carolina, allegedly struck her near the right ear before being arrested by a police officer who was on foot patrol nearby. His LinkedIn profile states that he is a technology executive covering deployment and maintenance operations at Bank of America. Carrasquillo was taken to hospital with minor injuries. Ruiz refused medical attention. He has been charged with two counts of misdemeanor assault. His bail was set at $1,500 during an arraignment in Manhattan Criminal Court Thursday night.  Carrasquillo denied taking the man’s wallet.  ‘I didn’t do any of that. I’ve been out here two years,’ she said to the Post. ‘ ‘That man needs to pay for what he did to me,’ she said. ‘He hurt me. He grabbed us in the middle of the street and we tried to get away from him and he still kept trying to assault us.’ According to prosecutors, the bank exec said, ‘I grabbed her. I was looking for the police, but I thought she pickpocketed me.’  Reportedly, the square’s famous ‘Silver Cowboy’ also tried to break up the scuffle. Walters’ lawyer claims the singing cowboy threw Walters to the ground, and cited silver paint on the exec’s clothes as proof.

Theres a few things we need to dig into with this story. First we break down the parties involved:

What sort of self respecting 46 year old man takes pictures with the Naked Times Square Hispanics? I mean I understand you’re not from around here but you’re a grown ass man snapping pictures in public with the Desnudas. If thats not an immediate red flag I dont know what is. Granted the counter party is naked Puerto Ricans from the Bronx who beg for money in the streets, so its not like they are exactly credible.

Now, we break down the actual alleged crims:

On the one hand, if you’re gonna beat up 2 women in public for stealing your wallet, you better make sure they actually stole it. These girls are naked. Kind of hard to hide a wallet after stealing it with nowhere to put it. Yanking a chick by the hair and beating up her roommate when you dont have definitive proof is a bad move.

On the other hand, these are Desnudas we’re talking about here. They are modern day gypsies. They are 100% thieves in the night. You think they dont see a mark when they see one? Some middle aged finance dude from North Carolina? Thats like a present wrapped up under the tree on Christmas morning for these naked bandits. You think that just because these Desnudas dont have pockets they dont have anywhere to put a wallet? Think again, my friends. Use your imagination. Imagine a place a naked street beggar could hide something out of sight. Like hey man you can have this wallet back if you want, but it wasnt wearing a condom. So unless you wanna take the risk of catching whatever that Desnuda had via your wallet, you probably should just chalk this one up to a loss

The 2 parties involved are both mind boggling weirdos. The evidence, or lack there of, of the incident is kind of a wash too. Sure, there was no wallet found on them. But did this guy really just magically lose his wallet? It had to go somewhere.

Which is why, in the end, I say these bitches ran this dude’s pockets. Pickpocket gypsies are scam artists. Its not like they take your wallet from your pocket and then put it in their pocket. By the time you realize your wallet is gone, that thing is 5 gypsies down the road. You get your pockets run at Times Square that wallet is back in the Bronx by the time you blink. Like an underground railroad of naked gypsies and street beggars passing it uptown. You cant go ragdolling these women when you have no proof though. Thats why you just dont take pictures with people who beg for money. Keep them at arms length at all times.