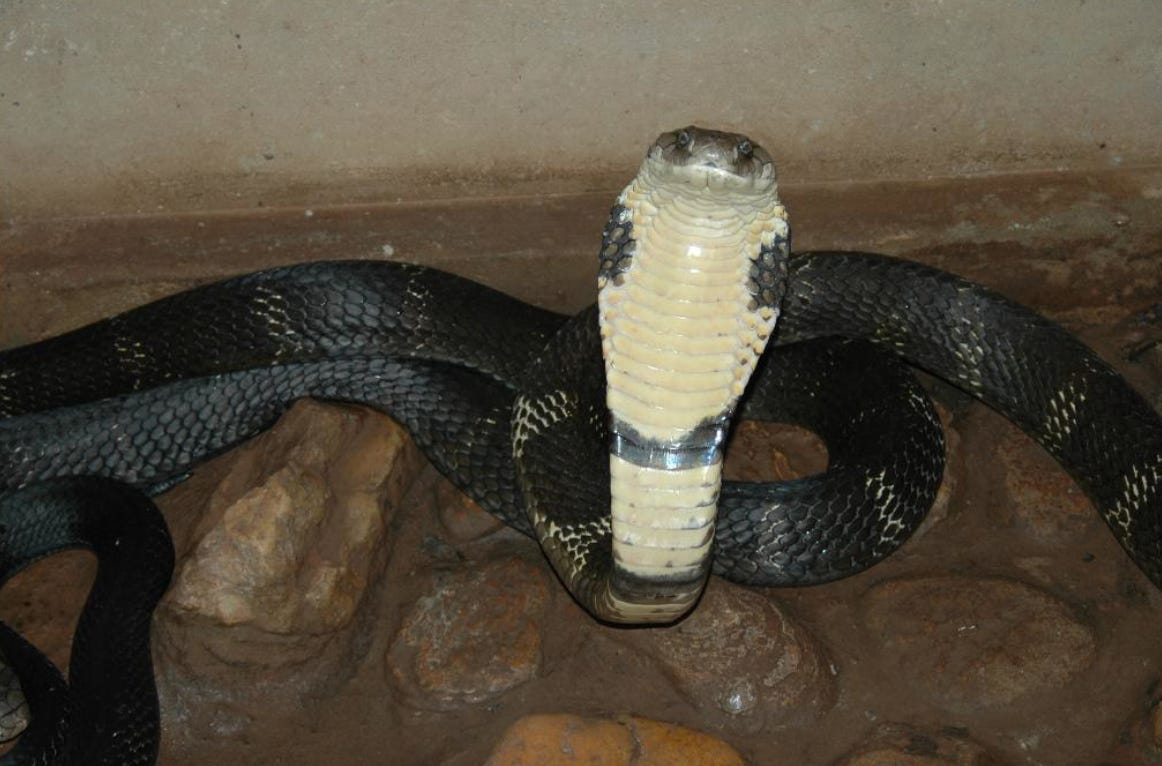 TIME- The snake is eight feet long A king cobra has been on the loose in Orlando since Tuesday, officials say. “We are used to snakes here in Florida, but a king cobra is a totally different story,” a TV anchor said on WESH2. The male cobra is green and yellow and about 8-feet long. The owner, Mike Kennedy, didn’t report the escape right away when it went missing on Tuesday, and could face criminal penalties. Kennedy is the star of the Discover Channel reality show Airplane Repo and calls himself an exotic animal dealer on his website. His site also features images of him with various exotic animals, including a king cobra. Officials believe the snake will stay close to home in a woody area. According to National Geographic, one bite contains enough venom to kill 20 people.

So yeah.  Just a quick heads up to the people of Florida. Lots of Brady/NFL stuff in the news today and didn’t want them to miss this. There’s an 8-foot King Cobra slithering around your state and people can’t seem to find him.  I know you guys constantly have your hands full with, well, other Florida stuff but just keep your eyes peeled for this bad boy. Hell, an 8-foot King Cobra on the loose might not even move the needle in Florida.  I really don’t know.  There’s so much crazy shit that happens there every 6 minutes that a King Cobra running about might rank pretty low on the Oh Shit Meter. I’m just trying to be nice.  Not sure if you read the article but it says one bite from a King Cobra has enough venom to kill 20 people.  That means if you get bit by one you instantly die, right?  That has to be the case.  You get bit by a king cobra, you get 20x the venom killing power injected straight into your bloodstream.  Two things can kill you as soon as they touch you.  The Grim Reaper (who is obviously real) and the fangs of a King Cobra.

This part of the article was very Florida

The owner, Mike Kennedy, didn’t report the escape right away when it went missing on Tuesday

Hey Mike, what the fuck bro?  This is a King Corba we’re talking about, not the TV remote.  Don’t just throw up your hands and say, “Well, it’ll turn up eventually.”  Report that shit.  God damn it, Mike.