Another day, another glorious clip of Vlad Putin wheelin’ around and playing some puck. I feel like the guy is out on the ice every day at this point and I don’t think I’ll ever get sick of it. He continues to challenge himself each time with more and more competition. This time, he loaded up his squad with Alex Ovechkin and Geno Malkin to take on a bunch of pre-teens because what offseason? And as has been the usual when Vlad Putin takes to the ice, there were plenty of gems here. 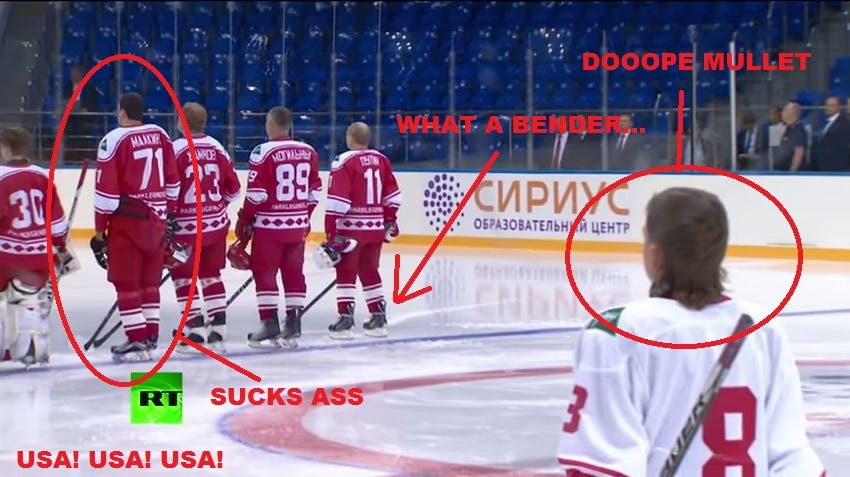 A) Malkin is a pussy.

2) Glad to see that Putin finally made the switch over to wearing a Bauer Re-Akt bucket. I think it’s a good fit for him. But does he really tie his laces around his skates? BENDER ALERT!

D) #8’s mullet is on fleek, as the kids these days would say.

Hey kid. This is Vlad Putin just walking in on a breakaway on you. The man who kills people just for looking at him the wrong way. You really think that eating up that wicked wrister from the slot is really in your best interest? You let that shit go in 10 times out of 10. Pretty sure his parents are probably dead now.

And now since we’re already on the subject of hockey in Russia, feast your eyes on this Colby Genoway shootout winner from a little KHL action yesterday. Hope you brought an extra pair of pants with you today.

Jeeeeezus. I think even Datsyuk would let out a little pre after that one.