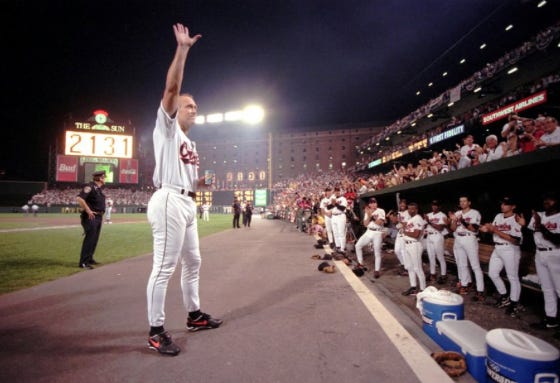 The Orioles are terrible right now. Pretty much can put a fork in them for the season. Can’t pitch, can’t hit, can’t win on the road, can’t beat teams over .500. You know what they can do? Bring back everyone in Baltimore’s childhood hero and celebrate the most unbreakable record in sports history (4 days early because they’re on the road on September 6th).

Cal Ripken Jr is, and always will be the greatest Baltimore athlete ever. Cal Ripken Jr could kiss my girlfriend on the lips and I’d apologize to him, the man with the baby blues can do no wrong. The streak started in 1982 and ended in 1998- to put that into perspective, Manny Machado is now the active leader in consecutive games played at 132. Manny would have to play until 2031 to match Cal. No one in history will ever come close to touching Cal’s streak.

You know the deal, on September 6th, 1995, Cal Ripken Jr broke Lou Gehrig’s record for consecutive games played, playing in his 2,131st game in a row. Cal went on to play another 501 games and ended the streak on his own terms, taking himself out of the lineup before the final home game of the 1998 season, making it 2,632 games in a row. There were a few times where it was rumored the streak could end, Ripken’s knee injury he suffered from a bench clearing brawl, breaking his nose taking the All-Star team picture, beating Kevin Costner’s ass after he caught him with his wife (ALLEGEDLY). No matter what it was, Cal played through it.

The ceremony last night was great. Giant “2131” numbers hung on the warehouse like in ’95, and the stadium played a video tribute to Cal, showing speeches from Orioles owner Peter Angelos, Joe DiMaggio, and Cal himself. Showed highlights from both 2,130, and 2,131. That moment when Cal hits the home run in 2,131….all the feels, goosebump city. The man himself came out and threw out the first pitch to another Oriole stud, Brady Anderson, which is about the time everyone in the stadium came their pants. He tossed a perfect strike, they hugged, I almost cried, and all was right in the world. Cal’s wife was sitting a few rows from me and hasn’t aged a bit, looking pretty good Mrs. Ripken. 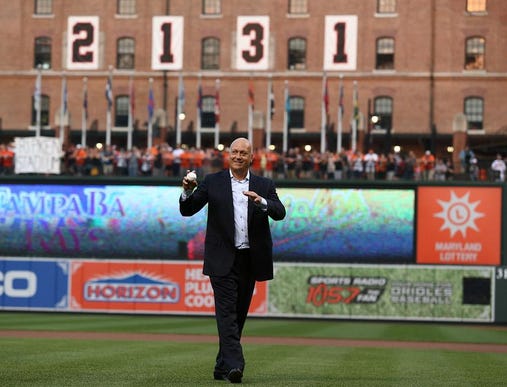 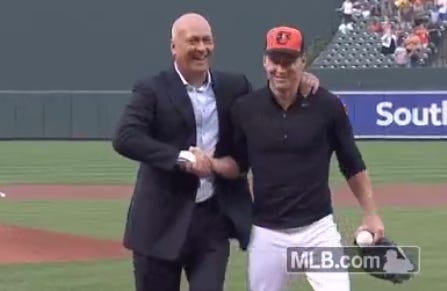 Then the 2015 Orioles killed the vibe and let the Rays run all over them, giving them 12 losses in their last 13 games. Just fading hardddd down the stretch. It was nice of the O’s to pay tribute to Cal and play like those garbage teams from the mid 90’s, just to remind Cal of what he was missing.

Cal was just a regular guy, just doing the all-american thing, going to work every single day. Breaking Gehrig’s also came after the strike in 94, and helped bring people back to baseball. Fans even voted it the most memorable moment in MLB history. Ripken changed the shortstop position forever. Before him, there were no bigger guys playing short, there is no Jeter, A-Rod, or Tulo playing short if not for Cal. Playing in the heart of the steroid era, Cal stayed healthy, played great defense, and mashed at the plate, all without juicing.

The guy even made A-rod seem likable in his last All-Star game when A-rod forced him to play short, who else could make people go “Oh that Alex, that was such a nice and not selfish thing to do!” Cal finished his HOF career with 3,184 hits, .276 average, 431 homers, and 1,695 driven in. Great baseball player, even better guy, don’t think I’ve ever heard anyone say they didn’t like Cal. Yankee fans, Red Sox fans, everyone loved the Iron Man.  Always awesome to see the ultimate Baltimore icon be recognized for the most unbreakable record in sports history. 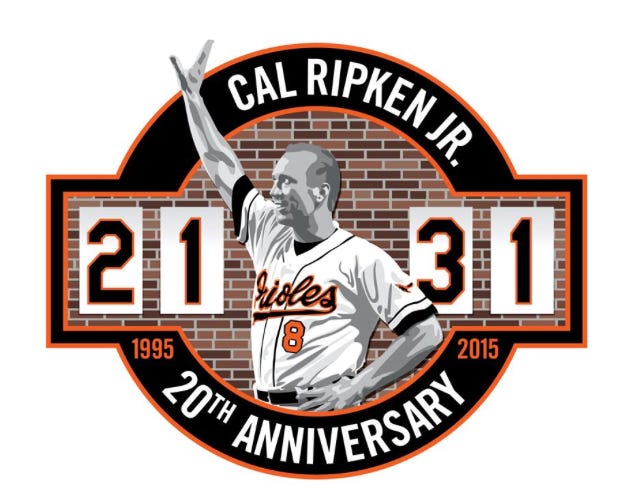