NFL.com – Behold perhaps the most Harbaughish story ever told, courtesy of Bleacher Report, as Beamer recalled a conversation he had with Harbaugh in 2010 when the two were in Miami for the Orange Bowl between Beamer’s Hokies and Harbaugh’s Stanford team:

“After we take some pictures, we start talking, just the two of us,” Beamer said. “Jim says over and over how much respect he has for Georgia Tech. He must have said it five times. I’m just looking at him like, ‘Are you serious?’ Finally, I’m joking with him and I say I can’t wait to tell my team that you called us Georgia Tech. Because, you know, we’re Virginia Tech.”

As described by sports writer Lars Anderson, Harbaugh’s jaw dropped agape. Then he mustered a response that only Harbaugh could.

“Well,” Harbaugh reportedly said. “I can’t wait to tell my players that you said you were going to play Samford, not Stanford!”

With that, Harbaugh turned and walked away, per the report.

The real head-scratcher here? That this happened within days of the game. With both teams already in Miami, having already watched miles of film on each other. It’s not as though Harbaugh’s gaffe came immediately after the matchup was announced weeks earlier, which would have been far less awkward, if still not understandable. The names and logos of both teams would have been plastered most everywhere either coach would have gone that week.

First of all if you don’t laugh at every Jim Harbaugh story you read you have a gigantic dump in your pants. The guy is gold for the human race, a gift from the gods for pure entertainment value.

And this “Jim Harbaugh is crazy” isn’t some like, “internet thing” or something. We don’t pick and choose stuff from his life and exaggerate it or frame it in a way that makes him interesting blog material. The dude is legitimately a full blown crazy person. And this is yet another exhibit to make the case. A simple story of two coaches meeting before a Bowl Game for some casual conversation turns into an anecdote that even the least experienced psychiatrist on Earth could use to clinically diagnose Coach Harbaugh as a psychopath. 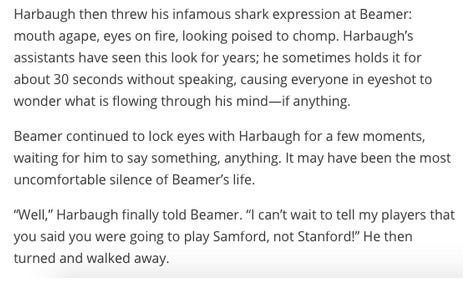 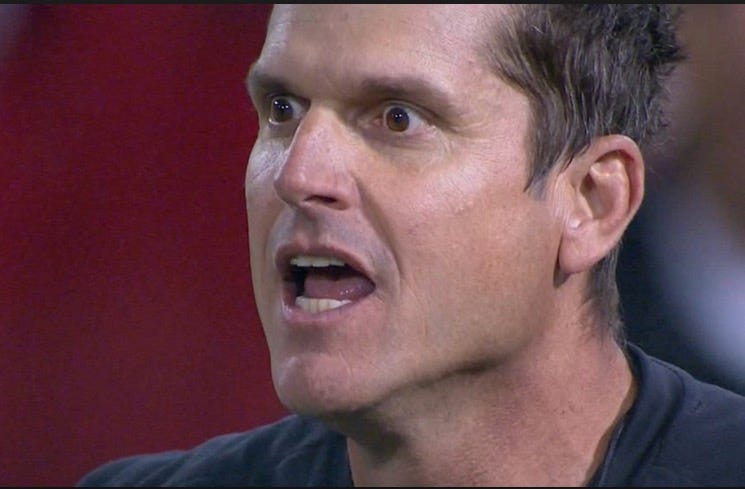 Oh and the best part? Beamer’s ass was so rattled he promptly got curb stomped in the game.

Couldn’t get the image of Harbaugh’s open mouth stare out of his head. #TheHarbaughEffect live and in color.

PS- Wonder how much Beamer fined his players for that blowout loss.