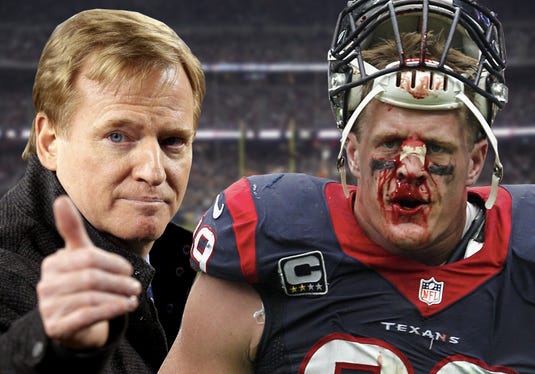 HOUSTON — Asked to weigh in on Deflategate, Bob McNair said Tuesday that his team’s biggest star wouldn’t destroy evidence such as Tom Brady did with his cellphone, an act that “escalated” the situation, the Houston Texans owner said. “What escalated the whole thing is that Brady and the Patriots were going to cooperate fully, and then when it came down to it, they didn’t,” McNair told Houston’s Sports Radio 610. “If it was J.J. Watt, I think he would have been cooperative, and it wouldn’t be a question. … I don’t think J.J. would destroy his cellphone.”

First, and let’s just get this out of the way, of course JJ Watt wouldn’t destroy his phone. Duh. Totally agree with that. JJ Watt would never do anything outside the rules of the league. He’s too pure, too good, too golden. Everything Watt does is above water. Everyone on earth knows he’s on steroids? Phooey. Steroids are illegal. JJ eats, sleeps, breathes and respects the game too much. He “gets it” too much. How would Bob McNair feel if JJ Watt was put in this position and treated this way? Trick question, it would never happen to JJ Watt because he’s perfect.

Second, has ANYONE read the Wells Report or paid attention to this investigation at all? Are you kidding me that the owners are doing interviews even when they don’t know shit? What the fuck is Bob McNair talking about? Brady’s destruction of a cellphone (or, ya know, “getting a new one.” How ever you want to say it) that he was told he wouldn’t need to hand over is what escalated this situation? Even though that happened long after a 5 million dollar check had been made out to Ted Wells in order to carry out his investigation? Don’t think so. Pretty sure it’s a widely accepted fact that Chris Mortensen’s 11 of 12 false report is what escalated this whole shame.

Third, and lastly, where exactly does all this lack of cooperation stuff come from? Because Brady offered to accept punishment for that in order to put this whole thing behind him does not mean it actually happened. In fact, Ted Wells (that’s the guy who did the investigation, Bob) said himself that the New England Patriots provided “substantial cooperation” and that Tom Brady was “very cooperative” and “totally cooperative.” Can’t really say that the escalation was due to a promise of cooperation that they failed to deliver on when the guy who ran the investigation says otherwise.

But, do you Bob. Keep taking interviews and answering questions even though you’re as clueless as an AM radio caller. Hopefully we’ll see you in the playoffs this year (doubtful) so we can run you out of the building again. Remember your varsity jackets.