They’re confiscating any signs at the gate at Fenway Park that have anything to do with Don Orsillo. That is an embarrassment.

We’ve seen some pretty embarrassing things from this Red Sox organization over the years, but this has to top everything.

I’m at Fenway right now, and I had heard rumblings that Don Orsillo signs were being confiscated at the gate. I didn’t see it happen, and I actually had a few people tweet me pictures of Orsillo signs that they had managed to have gotten into the game. But then that’s when the Boston Globe had reported that “Two Sox employees told the Globe that workers at Fenway turnstiles were ordered to confiscate any signs supporting Orsillo as fans entered Fenway.” 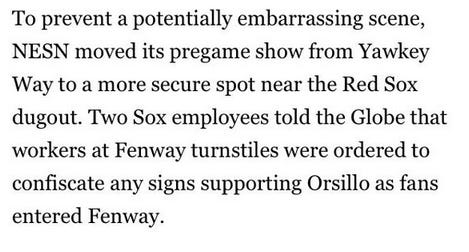 I tweeted out a screenshot of the aforementioned line in the Globe story with a link to the article, and it obviously went viral. Pissed off Red Sox fans were tweeting at NESN’s Twitter account, John Henry’s account, and the team’s official account. It was maybe less than an hour later that the Globe deleted the line about confiscating Don Orsillo signs at the gate, and this is exactly why a professional sports team should not own a news outlet that covers them.

It was bad enough that NESN and the Red Sox did our boy Don Orsillo dirty by blindsiding him with this firing — the backlash to the decision was unprecedented — but then they go and make things even worse for themselves by doing something so incredibly fucking stupid like this. How did they think the fans would react when they found out? Did they honestly think that this news wouldn’t get out? Did they think that the people working security didn’t like Orsillo? Of course they do. Of course they were going to tell people about it. They’re fans, too. I don’t know how anyone could have thought of an idea like, “Hey, if anyone brings Don Orsillo signs tonight, make sure you take them away. That’ll go over real well. Definitely not a bad look at all.” And then for the Globe to try and cover it up like it didn’t happen, because John Henry owns the Globe and he can do shit like that. Not on my watch.

I think we all owe an apology to Larry Lucchino for thinking that he was solely responsible for making PR disaster-type decisions in that ownership group. I’m sure he had a hand in some of them, but clearly he wasn’t acting alone. This is a complete and utter embarrassment, and I’m sure they’ll try to do some damage control in the coming days, but this is a black eye on the Red Sox organization and NESN that fans will never forget.

Update: A few beat guys tweeted this out, but the Red Sox are claiming that they “didn’t instruct anyone to take away signs supporting Don Orsillo. Said Orsillo signs treated like any others.”

Nobody could prove that this happened, but, for what it’s worth, I did have fans tweet at me who claimed that their signs were taken away. Take that with a grain of salt.

Also, the GM of BostonGlobe.com tweeted at me and said the following, but I’ll say the same thing here that I said to him. I’m not quite sure that Red Sox fans are going to buy this excuse. The Henry connection to the Globe is pretty damning, and both the Red Sox and NESN have lost the benefit of the doubt when it comes to any damage control in regards to Don Orsillo and this story. 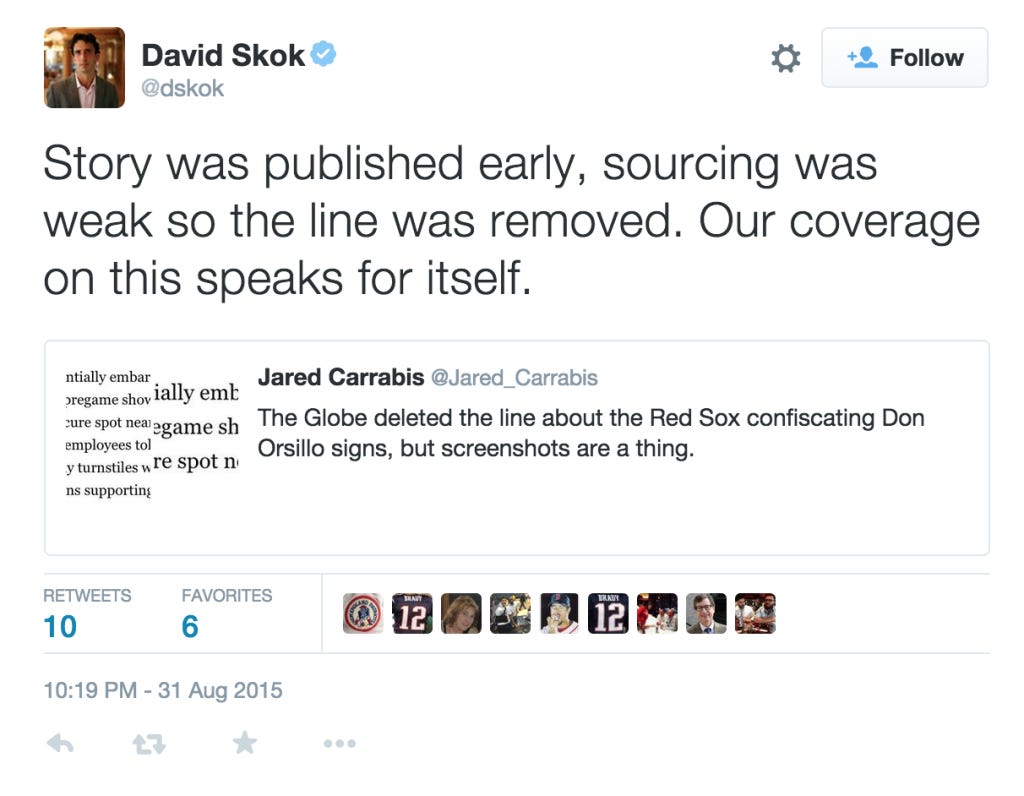