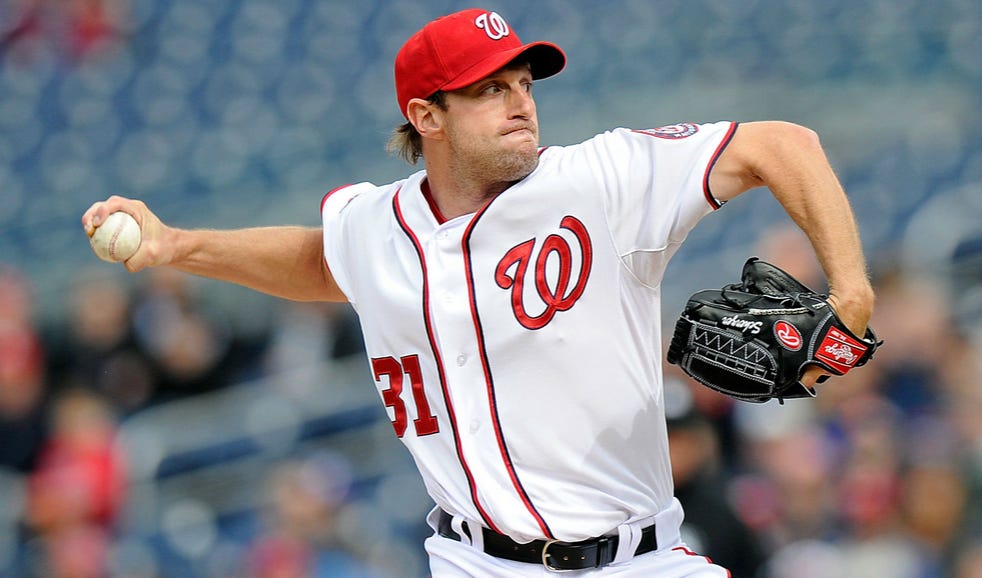 The Nationals’ big offseason acquisition’s 2.88 ERA (14th best in all of baseball) indicates a season of success for the ace. However, much of that 2.88 ERA is derived from his stellar 1st half where he was the number 1 choice for starting the All Star Game (but pitched the Sunday before) and when he put together what many claim is the best 2 start stretch for any pitcher ever (18 innings, 1 hit, 1 walk, and 26 Ks). Scherzer’s 1st half put him strongly in the conversation for the NL Cy Young Award but, since the 4 day break, Scherzer’s performance has slipped dramatically (as has the overall performance of the team itself). Scherzer’s ERA in the 1st half was 2.11 but has been an ugly 5.09 in 46 2nd half innings (including a 4-runs allowed in yesterday’s loss against the 52-77 Giancarlo-less Marlins.) 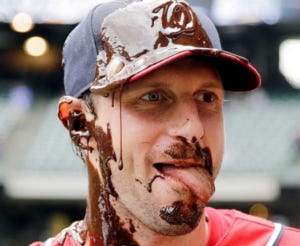 Aside from one rough outing (3 IP, 6 ER) in San Francisco, Scherzer really hasn’t had any true clunkers, he has just been generally not as effective. In his 8 post-break starts, only 4 are quality (and two of those are considered quality starts in name only – 6 IP, 3 ER). The two ‘good starts’ each came in July. Scherzer’s August earned run average is 6.43 (8th worst in baseball this month).

Why has Scherzer been so bad? Well, for starters, Scherzer has walked more batters in the 2nd half and has surrendered more homers. The 10 homers he’s given up in 46 innings is the same number as the 10 bombs allowed in 132 first half innings. Meanwhile, Scherzer managed to walk just 14 batters in the entire first half – he has walked 12 here in the 1st half. Max Scherzer had the 3rd best K-BB% (basically if you strike out 28% of batters faced and walk 5%, your K-BB% would be 23%) in the 1st half and, despite the huge increase in walks, Scherzer’s 2nd half K-BB% is still top 5. So, while the number of walks he has allowed isn’t insanely low like it was in the 1st half, its also not the culprit for his recent struggles.

Going back to the 10 homers allowed, this is a bit more troubling as the Homers allowed per 9 innings pitched in the 1st half was just .68 but that has surged up to 1.96 hr/9 in the 2nd half. Fortunately, the huge increase in hr/9 can be mostly explained by an uncharacteristic and unstable increase in HR/FB (percentage of fly balls that leave the park). HR/FB rates tend to be pretty stable across large samples of data. Scherzer’s first half HR/FB rate was 6.3% (his career average HF/FB% is 9.8%) and his 2nd half rate to date is an extreme 22.2%, 4th worst in baseball. Unless Scherzer devolved overnight from one of the best pitchers at limiting the longball to one of the worst (which is very very unlikely), Scherzer’s HR/FB% should be around his career 9.8% for the rest of the year. 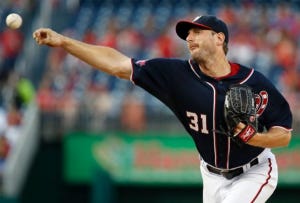 In a somewhat related development, Max Scherzer has allowed much more ground balls in the 2nd half (compared to fly balls) than he has at really any other point in his career. In the first half, for every 10 fly balls Scherzer pitched, he surrendered about 7 grounders. Through his 46 2nd half innings, Scherzer has allowed 11 grounders for every 10 fly balls. Scherzer’s shift from fly ball pitcher to becoming more of a ground baller may be an (incorrect) reaction to the large number of homers that he has allowed in his past 8 outings but may also be coincidental. The reason such a change in ground ball and fly ball percentages matters is that batters tend to have a much lower batting average on balls in play when they hit a fly ball as opposed to when they hit grounders. The .100 point increase in Scherzer’s opponent’s babip (from .242 to .342) can be partially explained by his shift into becoming more of a ground ball pitcher.

To Summarize: Scherzer is walking batters more, allowing more homers, and inducing fewer fly balls. The increase in walks brings his bb rate down from elite to above average. The increased amount of HRs he has allowed probably comes down to bad luck (and an over-correction of the small amount of homers he surrendered before the all star break). The shift to allowing more grounders than flyers could explain some of his 2nd half increase in opponent BABIP. Overall, I think that Scherzer should revert back into a top-of-the-rotation 2.80-3.00 ERA guy for the rest of the season (as opposed to the 2.11 ERA guy he was in the 1st half or the 5+ ERA guy he has been thus far in the 2nd.