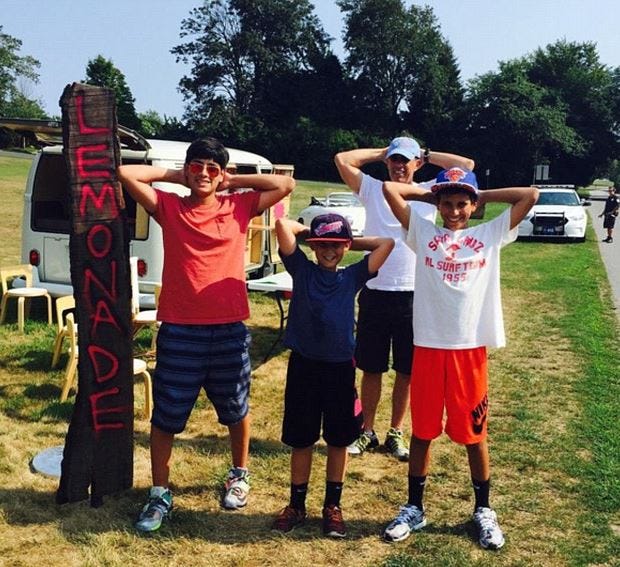 Dailymail - He famously dealt with a pesky neighbour in his highly-popular nineties sitcom. And it looks like life imitated art for Jerry Seinfeld. The 61-year-old comedian reportedly had his family lemonade stand for charity shut down in the ritzy East Hamptons neighbourhood of New York by police last week. Jerry’s wife Jessica posted a funny photo from the incident featuring the comedian, his son and two other young men posing with their hands behind their head next to a ‘lemonade’ sign while a police cruiser and officer lurked in the background. She captioned the image: ‘Lemonade dreams crushed by local neighbor but not before raising lots of money for @loverecycled. Thanks to all of our customers and big tippers!

East Hampton Village Police Chief Jerry Larsen told 27 East that they had received a complaint about illegally parked vehicles where the small lemonade business was located. According to the report, an officer then advised the family that the neighbourhood’s code did not permit lemonade stands on village property, in fact it prohibits all types of peddling. Proceeds from the beverage business were to go to Jessica’s nonprofit organisation Baby Buggy, whose aim is to help families in need access essentials to ensure safety and well-being including car seats and clothing.

The Hamptons fucking suck.  You’d never see this shit on Nantucket.  Little kid lemonade stands are everywhere.  I always stop and buy a glass because I’m an awesome human like that.  Don’t even want their shitty lemonade either.  Half the time I just pour it out right in there faces, but I still pay them for it.  Just me trying to contribute the community.  It’s just so typical of the snooty Hamptons to call the cops on this shit.  There is nothing I’d love more than to have a Nantucket vs. Hamptons street brawl to the death.   Just teach these people how to summer.

PS –  Seinfeld wife can cut the shit how all the money was going to charity.  How much can 1 lemonade stand clear?  25 bucks? And what kind of charity helps families in need with car seats?  How do you have a car if you’re a family in need?  This literally sounds like she went through a charity book and every other charity was taken so she was left with this made up charity that serves no real purpose.

Cue Costanza going to the Hamptons…..