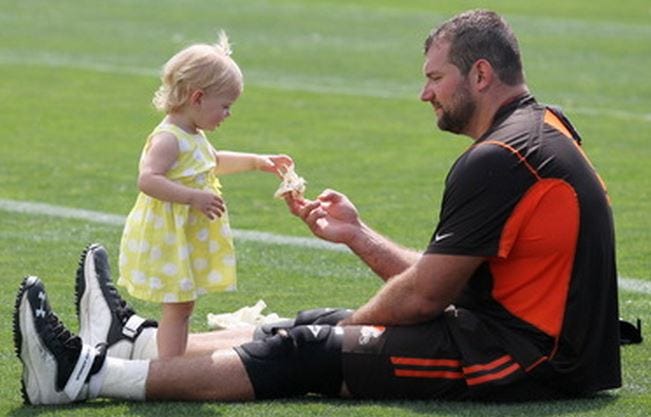 NBC - Browns left tackle Joe Thomas had an interesting take on Tom Brady and DeflateGate on Sunday when Cleveland-area reporters asked the eight-time Pro Bowler about it. Thomas likened the NFL to professional wresting and compared NFL commissioner Roger Goodell to WWE chairman Vince McMahon, saying the NFL is an “entertainment business” and that “basically, Goodell is Vince McMahon.” That may not go over well with Goodell, but Thomas said the NFL set up a “sting operation” on Brady and ultimately gave him “the death penalty” for what Thomas said equated “to driving 66 [MPH] in a 65 zone.” “I’m not sure if [Goodell] realizes what he’s doing is brilliant, but what he’s doing is brilliant because he’s made the NFL relevant 365 [days] by having these outrageous, ridiculous witch hunts,” Thomas said. “It’s made the game more popular than ever and it’s become so much more of an entertainment business and it’s making so much money. “That’s why I’m sure there’s plenty of people saying this is embarrassing for the league. But it’s an entertainment business when it comes right down to it. When the game gets eyeballs in newspapers and on TV, that’s what in the end is the goal for everyone. And that’s what this controversy is giving them.”

Preach Joe Thomas preach. The only thing I’d correct is his analogy of Deflategate being like Tom Brady being arrested for going 66 in a 65 zone and getting the death penalty for it. It would actually be more like the boyfriend of some chick Tom Brady fucked telling the cops that he heard Tom Brady was speeding and the cops set up an elaborate speed trap to catch him in the act except Brady was clocked at 65 in a 65 zone. Then the police spent millions trying to prove that Tom Brady had in fact speeded at some point in his life and when they still couldn’t prove it they sentenced him to death anyway because it was more probable than not that at some point in his life Brady had driven over the speed limit.

Also at what point is the expression any publicity is good publicity not true anymore?   Because I think we passed that point like 10 months ago with Roger Goodell.  I don’t think he’s brilliant.  He’s an egomaniac who is a serious threat to the league.  The NFL is a joke right now and everybody knows it.   I mean the NFL is so popular you got to go out of your way to make people hate it.  They are a bazillion dollar industry with or without these ridiculous stories.  An ant could be commissioner of the NFL and still make money despite themselves.  All Goodell has done is ruin the credibility of the league.   That can’t be good.  While I love Vince McMahon and he’s clearly a genius the WWE is scripted.  It’s fake. You need those story lines to sell tickets.  Is that what Goodell is going for?   It seems that way.