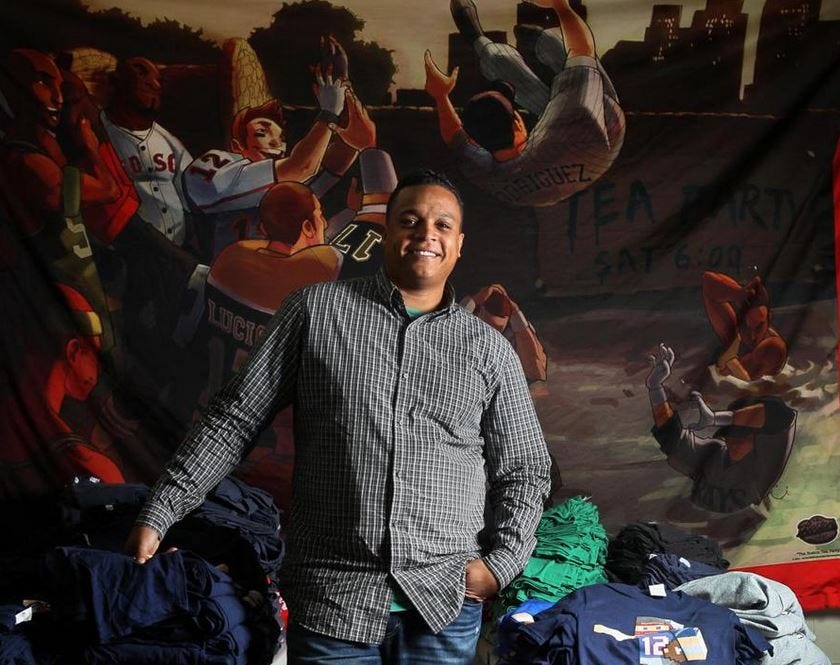 Boston.com – Rival t-shirt makers each claiming to have invented the “Free Brady” T-shirt logo are locked in a behind the scenes war of words. 43-year-old Mahlon Williams, owner of T-shirt maker Boston Sports Co. fumed that Portnoy has been stealing his ideas for years and reproducing them with less quality and artistic flair.“This is not a game they can win,” Williams said in an interview. “You can’t sell someone a Kia and tell them it’s a BMW.”  Then Portnoy: “He’s a chump, he’s a fake, he’s not even a Boston guy and these guys steal everything.” And Williams: “His followers are called ‘stoolies.’ I think that should tell you all you need to know.”

Listen I know that nobody wants to hear a guy who is jet setting across the world and owns multiple race horses complaining about tshirt wars.  I know I should be bigger than this. I know I shouldn’t play in the mud with this guy.  But what can I say?  You can’t run from who you are.  A zebra can’t change his stripes. This bothered me and when shit bothers me I vent about it.  I had to at least mention this article.   The Globe called me yesterday asking for a quote regarding this shit.  Apparently there is some debate who invented our Free Brady shirts which is news to me?  I guess this Marwan guy is now saying it’s his shirt.  That we steal ideas from him?  It’s straight bananaland.  It’s almost like the Globe and Marwan don’t realize the internet exists.  Hey fellas, it honestly takes 2 seconds to look this info up.  We put ours on sale the instant Brady got suspended. 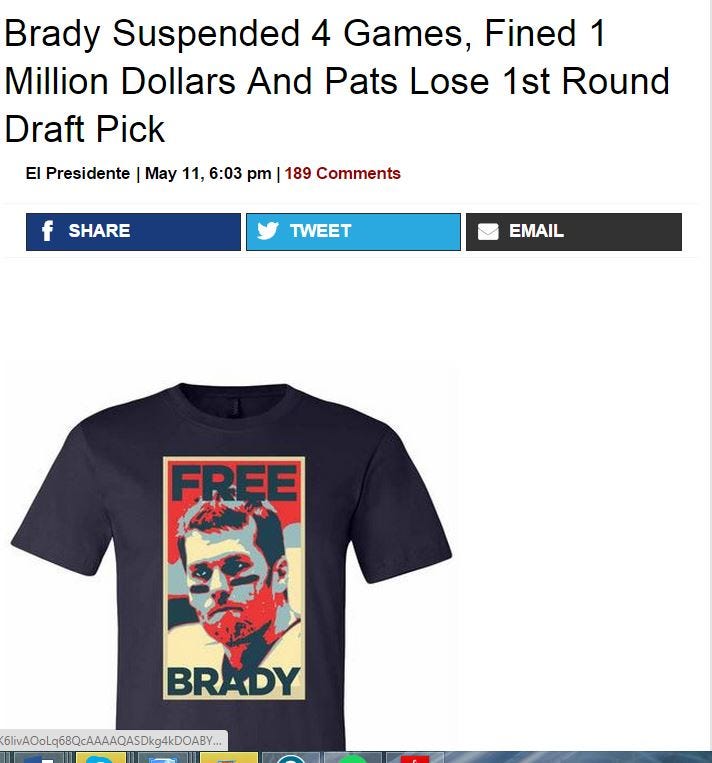 After 20 seconds of research I found out that below is the original Free Brady shirt Marwan put on sale the same day we put up ours.  May 11th the day the verdict came down. 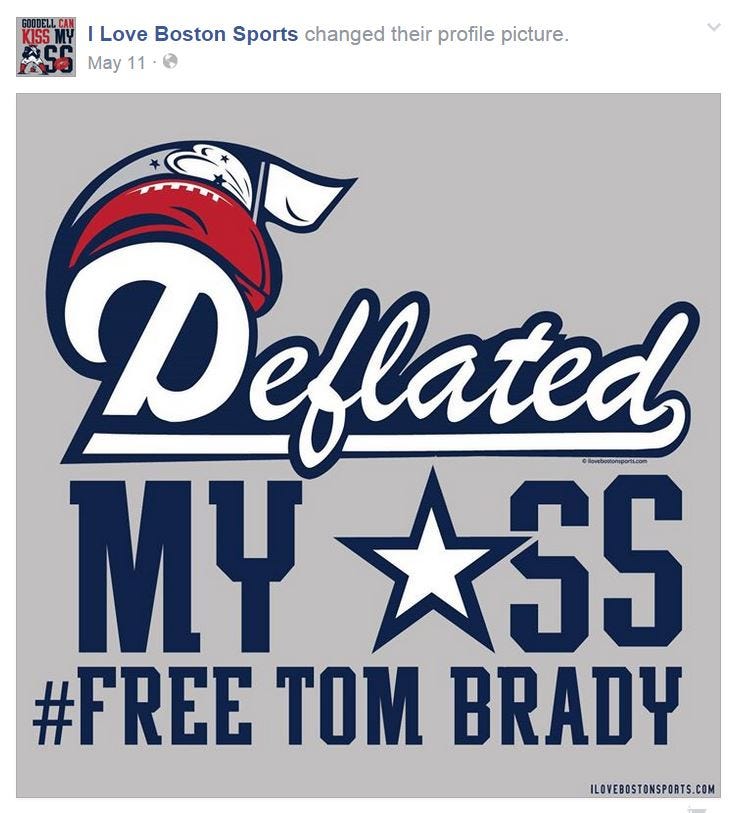 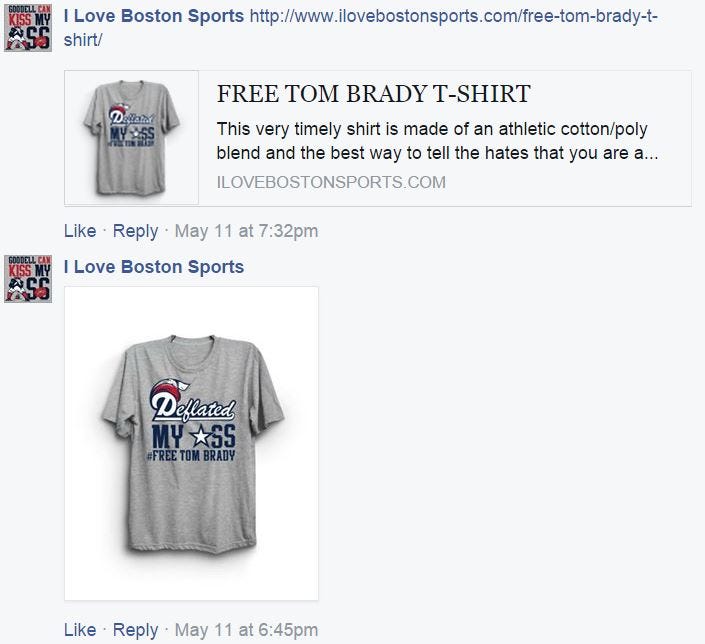 Then 3 weeks later, long after we went to jail and we had made our version famous he copied it.    That’s not a debate.  That’s not name calling.  Those are just facts that are readily available to the world.  It will get dark tonight.  This dude stole our shirt.  Here is Marwan’s first mention.  Notice the date.  June 2nd. 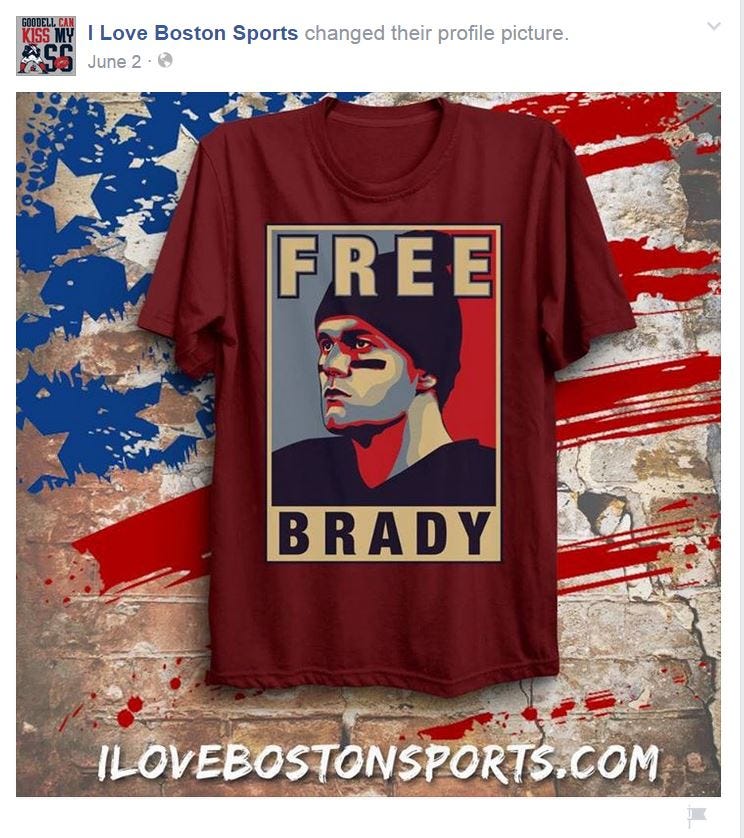 So can somebody remind me why the Globe couldn’t figure this out before writing this article?  Somebody is lying and somebody is telling the truth.  It’s not that hard to see.  But that’s really neither here nor there.  Instead how about the balls on this dude?  This would be like if somebody stole your car and then called the police and said you stole his car. It’s pure insanity. Bro I couldn’t steal from you even if I wanted to.   I didn’t know who you were till this article came out. You’re an ant.  A nobody.  A fly.   There isn’t one person who bought the knockoff Brady shirt who knows what company it’s from.  Everybody who buys our  shirts knows it’s a Barstool Shirt.  We’re a brand.  We stand for something. We went to jail for something. You’re an ant and that may be an insult to ants.

Listen I understand that guys like Marwan will always copy us. That’s fine.  It comes with the territory of being King of the Mountain.  I wouldn’t want it any other way. Everybody sees every move we make.  Hell this dude is probably a commenter on our site.  Just waiting for me to put a new shirt on sale so he can steal it and ride our coattails.  That’s just part of the tshirt game.  It’s a dirty business. But the audacity to just straight lie about it?  And then to say all the Stoolies suck?  Stunning.   Just crawl back into whatever hole you came out of and be thankful I exist so you can profit off my brain.

PS – How about this quote from Marwan?

.“This is not a game they can win. “You can’t sell someone a Kia and tell them it’s a BMW.”

What the hell does that even mean?  Free Ball Don’t Lie shirt to anybody who can decipher that quote. I mean in 10 years of blogging I’ve literally never heard anything make less sense than that.  Seriously forget suing this guy even though I have a case, I should sue the Boston Globe for just mentioning me in the same article with this low life.   This dude is an ant.  He should stay with the ants and not mix it up with moguls.

Double PS – I know people are gonna all me stupid for giving this ant publicity, but here is the thing.  Stoolies buy our shirts.   Fans of our website.   He just called all Stoolies assholes.   I’m not too worried about our guys picking him over us.   If you do then we don’t want you anyway so it’s a win win for everybody.