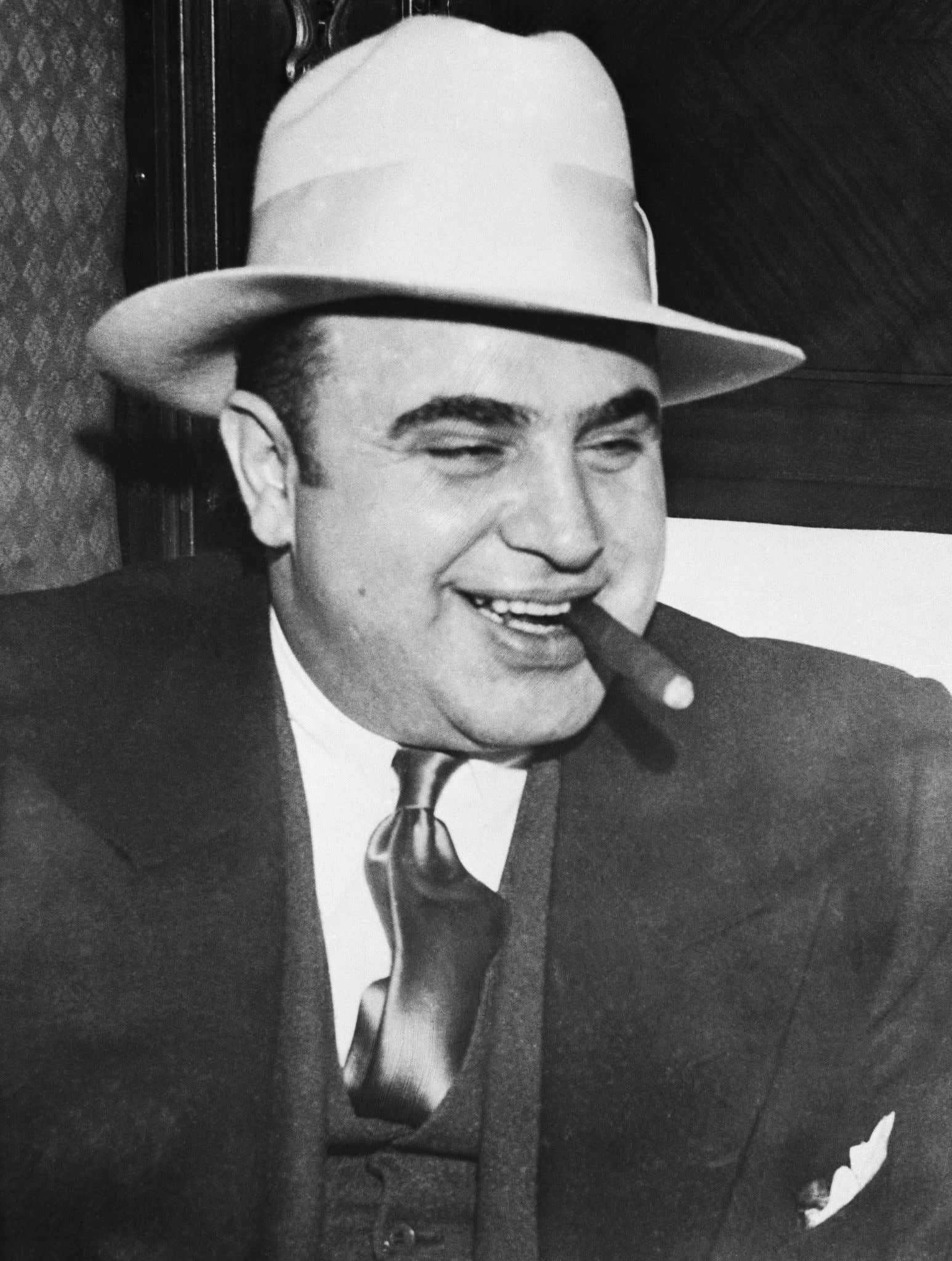 Now many of you reading this may actually know that headline.

On this day in 1947, Chicago gangster Al Capone finally succumbed to the disease that he caught as a young pussy hound back in the early 20's.

I thought it be interesting to tell you some interesting facts about the man, the myth and the legend, Al Capone. Some maybe you didn't know.

The nickname he hated… so whenever you hear someone mention Capone, you'll always hear "Scarface". Al hated it by all accounts and no one actually called him that other than the media and never to his face. He gained the nickname after actually being slashed and from it he developed scars. Capone grew up in Brooklyn and in his late teens was at a bar on Coney Island called the Harvard Inn, which was leased by a Brooklyn gangster Frankie Yale. Capone would moonlight there on occasion as a bouncer. One night Capone was hanging there working the door when a pretty women with a nice ass walked in. He commented to her “You got a nice ass, honey, and I mean that as a compliment," to which her brother Frank Gallucio heard it and cut him. He would for years of his life attempt to hide the scar. Down the road in 1936, while serving time in Alcatraz for tax evasion, he was again slashed, in the shower by an inmate, bank robber James Lucas. Lucas claimed he was marked for death by Capone and he was defending himself.

The nickname he didn't mind… was "Snorky" which in those times was slang for a sharp dressed man. Capone could dress when he made his rise and always was seen looking the part. He enjoyed bright colored suits, fine fedoras and a signature cigar in his mouth. He was rarely seen in anything but a suit. In the end, none of this friends probably called him this but in jokes and I'm sure Al got a kick out of it. From what I know most of his close confidants just called him "Alphonse" or "Al".

His love for baseball… Al grew up playing baseball and actually even was involved at one point with semi pro. As a kid he would play first base and his brother Ralph was pitcher. Eventually he would move to pitcher and was quite good. Many people will remember in his later years as a plump guy, but in his youth he was quite athletic and rangy. According to this box score from the old newspaper The Brooklyn Citizen (a paper that ran until 1947) Al and his brother had quite the game in June 1918. Al had a few hits and was a star on the mound. His brother Ralph had a homerun.

The most infamous baseball moment would come once Al moved to Chicago.

During an exhibition game in 1931, six time MVP catcher Gabby Hartnett saw Capone, his son and several of Capone's assassins including Sam "Golf Bag" Hunt and  "Machine Gun" Jack McGurn in the front row. He ran over to sign a ball for the gangster. The above photo made the rounds in newspapers in the coming days. Eventually Hartnett received a telegram from the commissioner of baseball at the time and he demanded that Hartnett not take anymore pictures with Al Capone. Hartnett allegedly responded with a telegram back to him saying

"OK, but if you don't want me to have my picture taken with Al Capone, you tell him."

It never actually happened. There was actually two men that tried to plot to take the Outfit over Albert Anselmi and John Scalise but they were actually killed by gunshots, not baseball bats. The film though good is mostly inaccurate. To me this portrayal of Capone wasn't great. Stephen Graham though knocked it out of the park if you will in Boardwalk Empire.

Capone had only one child… a son Albert "Sonny" Capone who was referenced above  was born on December 4th 1918. Al and his girlfriend Mae Coughlin would actually have him out of wedlock and were married December 30, 1918. Sonny was partially deaf after he developed issues as a young child and had a brain operation which caused his hearing issue. Sonny ultimately lived a long life, had children and ultimately died in 2004 at the age of 85.

He was NOT addicted to cocaine…In 1932, he was officially diagnosed with syphilis in prison. At that point, a report clearly states there was no use of drugs by Capone. There was a rumor that cocaine had destroyed Al Capone. Books and movies ran with it and claimed that his septum was destroyed from his use of the white powder. Now Capone may have tried a line or something early in his life, however there is no known proof of any addiction and in fact if you look into some long terms patients that have syphilis, they have deviated septum's. Interestingly enough according to a popular Al Capone museum, Capone had nasal issues all his life.

Capone had a long history of bad sinus trouble, suffering from post nasal drip since he was a very young boy. That problem added with a few fist fights during his youth may have worsened his sinus problem. On September 5, 1929, he was operated on by Dr. Herbert M. Goddard for his sinuses and tonsils during his stay at the Eastern State penitentiary.

He was most likely not a junkie.

Al Capone did go to prison for tax evasion but never actually served one minute for any murder or serious crimes. He actually died as a free man… Capone was actually released from prison in the early 40's. He by that point was badly suffering from the syphilis and his brain was that of a 12 year old according to an exam in 1946. There has been pushback from his granddaughter Diane who said that he his brain wasn't actually that deteriorated in this interview

On January 21, 1947, Capone suffered a stroke and went into cardiac arrest and died on the 25th. He was 48. Luckily, his former property was recently saved from demolition. Maybe they will make it into a museum or something.