When he's at the top of his game, there is not a more electric athlete in sports right now than Ronald Acuña Jr. And it sure looks like he's back on top of his game.

I count 19 seconds and six separate celebrations from Ronnie by the time he gets to first base after this homer in the championship series of the Venezuelan league. If this is what Acuña is pulling out for a fourth inning homer in Venezuela, can you imagine what he's going to do for his three bombs in the 2023 World Series?

As incredible as this celebration is, I do have one complaint, which is that we don't get anything from first to second base. Maybe he played too much of his hand too early and had to use that 90 feet to think of his next moves, but that's 25 percent of the trot. Don't waste it.

Acuña did come back strong by seemingly give the shortstop the "too small" gesture as he rounded second, which is great stuff. 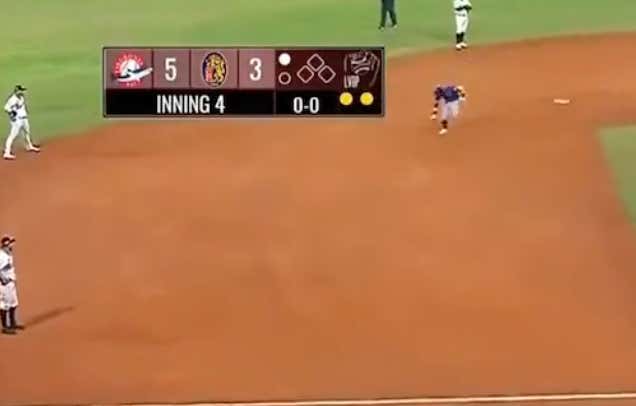 And then he ended things with another handful of moves from third to home to complete the 40-second trip around the bases. I just wish it was longer.

I can't wait to watch Ronald at full strength again. It's easy to forget — because the Braves went on to win the World Series, no big deal — that he had a .990 OPS with 24 HR and 52 RBI in 82 games when he got hurt in 2021. Adding him at his full potential back into the Braves' lineup is going to be fun to watch.