Wow, guess I finally know how these guys feel... 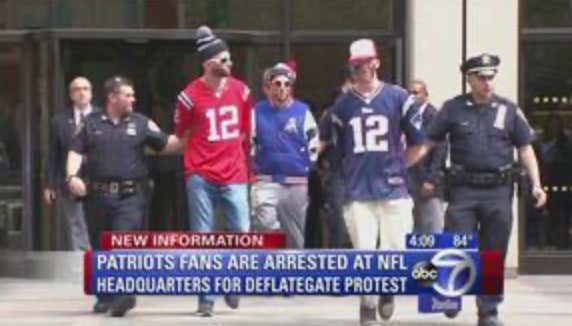 Because that's what happens when you put it all on the line for #football and you eat, breathe and sleep #sports like I do..

On today's episode of ZeroBlog30 Captain Cons gave me an update on the 5th grade level prank I pulled on the Giants this past Saturday (which likely caused them to lose the game because they probably felt so embarrassed), and it turns out some folks actually were mad about it. Enough so that they took the time to bug East Rutherford police about it, who in turn were so annoyed that they considered issuing me a citation for public vandalism.

Here's the text exchange between Cons & his cousin before he called to give him the full deets:

Thankfully the department has a good sense of humor and didn't let a few salty, saaaaaaaad lil Giants fans ruin some simple, high-brow Eagles fun, though I'm sure the citation write up would have made for a better blog.

And for the record, I didn't try to be sneaky about it. I just walked right on over in the middle of the day & taped that sucker up while I repeated, "This is so fucking stupid and I'm so fucking stupid," to myself over and over. A kindly Jets fan on the platform even offered to help. And in the big scheme of things it was so tiny. The smallest of giant farts: 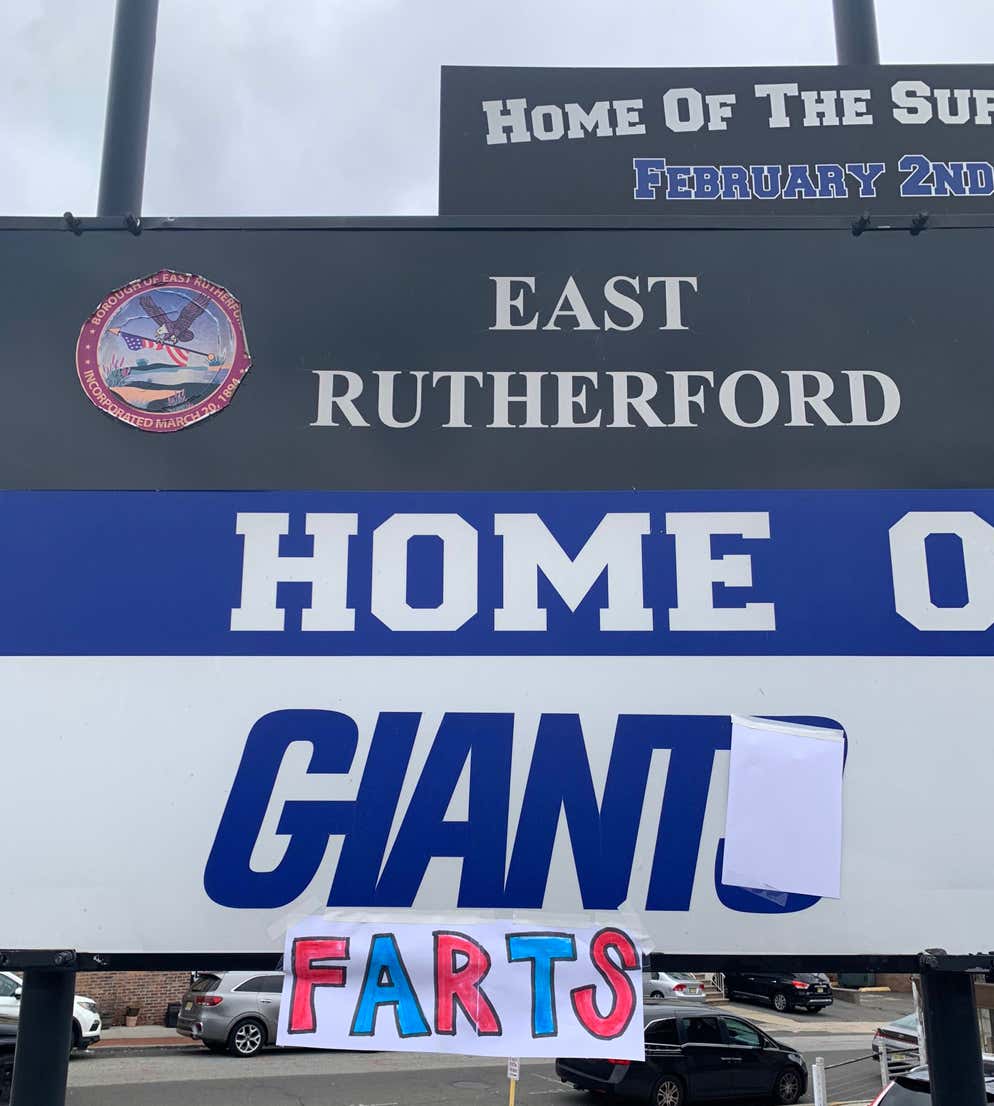 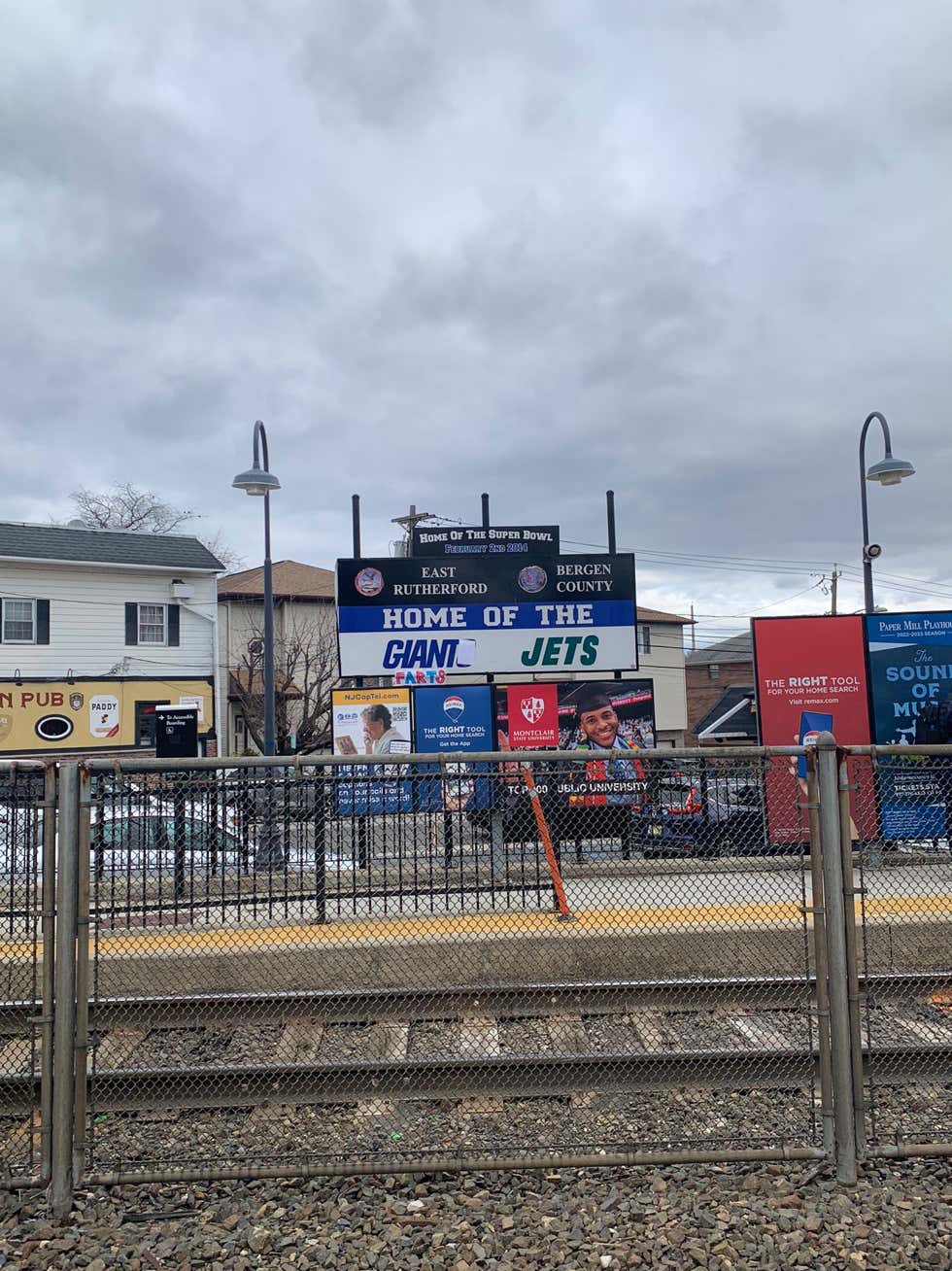 Anyways I'm glad I'm not truly banned from the Borough of Trees because I love this town. Moved here on a total whim, sight unseen when I found out I was pregnant and thus priced out of NYC if I wanted a washer & dryer #neat.. I didn't know what to expect but it turned out to be the perfect fit for us from the people to the parks to the very legit food scene.. Materas, Taco Loco (best birria ever), Erie Bakery, Sonoma Bistro, all the Italian restaurants crushing the Sunday sauce on game days… It also has that North Jersey culture flair I adore with the tanning salon still bumpin' & the Extremely Fancy Kid's Baptism/Communion Gown And Tuxedo Store That Is Too Pricey For Us But Lovely. And I don't want to give the cops any more info against us, but we've also loitered, squatted & pooped all over this place, especially by the library.

In closing, thanks East Rutherford PD for giving me a pass, condolences to the Giants that they played like stinky gas, and please know that night I removed the rest as a lady who has class.

It's time to move on to more important things, like burning the 49ers so badly they won't be able to think straight come Sunday.

Be sure to check out the rest of today's ZeroBlog30 where we tell the story of an Iraq intel vet who saw a news story about a little girl's stolen dog & sprung into action to get it back.