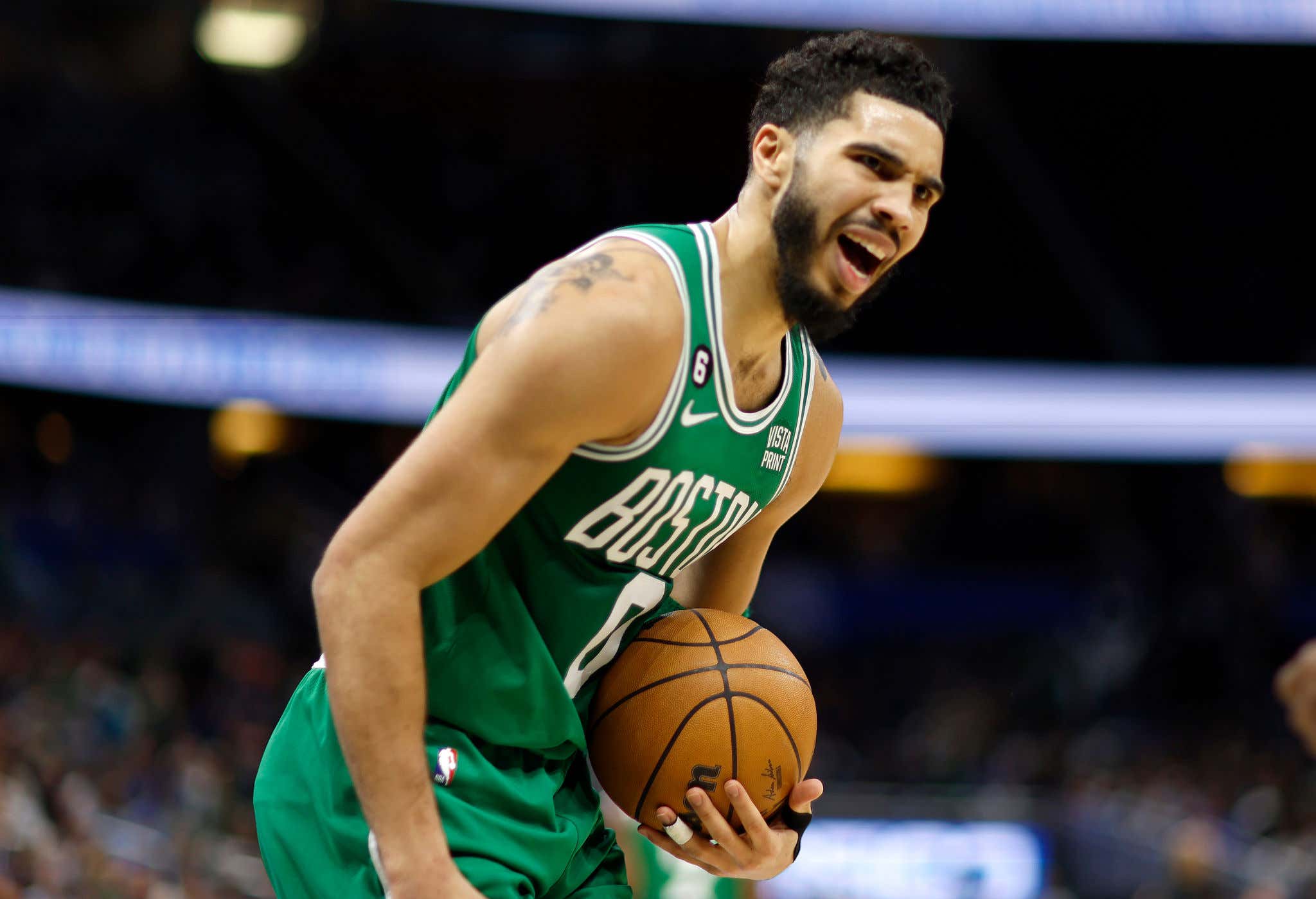 Without Smart, Rob, and Brogdon, there were obviously going to be some challenges, but I think we need to be careful with that line of thinking. Who knows how long Rob/Smart will be out, there has to be an expectation that the Celts still find a way to play good basketball. We just saw them do it against the Raptors (with Brogdon) so my expectation is somewhat the same for a game like last night. Especially considering the Magic took back to back games at the Garden. I wouldn't say this was a game where the Celts didn't respect their opponent or any of that stuff, they just got their ass kicked. The Magic were better pretty much across the board, and that late game execution that had been so crucial in their last 3-4 wins was nowhere to be found last night.

When you've won 9 in a row, it's not all that uncommon that the streak ends with a stinker. We literally lived through it earlier this season before the 121-107 loss on the road to the Bulls. Sadly, the Boston Celtics still own the best record in the NBA and have a 4 game lead over the 2 seed despite this sky is falling loss. Shit, they could win tonight vs MIA and nobody will care about this game.

But that doesn't excuse what we saw. It was gross. Everything you hoped the Celts wouldn't do while being shorthanded on the road, they did. You add all that up and that's how you get a score like this.

The Celts have failed to break 100 points only 3 times this season (48 games). Two have come on the road, and two of those three times have come against the Magic. Their size and speed give the Celts trouble, there's no denying that at this point. The sample is large enough to say that this is a team the Celts struggle with matchup-wise.

So while laying the 9 game winning streak to rest and turning the page to the Heat, we first must talk about what we watched.

- Not a whole lot to choose from in this shit sandwhich, but I suppose the play of Jayson Tatum fits the bill

He was the only Celtics player to finish with a positive +/- at a +6, and on 9-19 (4-10) which is good for 47/40%, his efficiency was fine. In fact, it was the play of Tatum that actually got the Celts a lead midway through the 3rd quarter. His 3PM with just under 7 minutes left gave the Celts a 68-66 lead before he had to come out with whatever that stomach issue was. This was not a game where their best player no-showed or anything like that.

Unfortunately for the Celts, they were dogshit without Tatum on the floor. A +6 with him on the floor and a -21 in the 11 minutes he was off the floor. That is HORRENDOUS. In the final 6 minutes of that 3rd quarter, the Magic closed 20-11. By the time Tatum was back and ready to come back in, that 68-66 lead was suddenly a 73-86 deficit in just 4 minutes. Quick math there tells you the Magic went on that 20-5 run while Tatum was in the locker room. I know guys were out, but there was enough talent on the floor to not give up a 20-5 run.

- It was nice to see Sam Hauser finally make some shots again. I can't remember the last time we saw him make 3 3PM in a single game. In fact hold on, let me look it up.

Before last night, the last time we saw Hauser do that was 11/28. Nearly 2 months ago. That feels right.

With any shooter, it's all confidence. Given his 2 month long struggles, Hauser didn't really look all that confident as of late and as a result had fallen out of the rotation. For him to go from DNP-CDs to 5-9 (3-6) off the bench is exactly what this roster is going to need from him. So while this loss is annoying, perhaps this could be the thing that helps Hauser snap out of his funk, because we all know how valuable his spacing can be when he shoots that shit with confidence.

- It's not often you'll see the Celts go 18-46 (39%) from three and not only lose, but not break 100. Feels pretty annoying to waste a good outside shooting performance if you ask me, especially when your two best players go 9-21.

- Man, there's a lot to choose from in this game that I found very unacceptable. Let's start with the perimeter defense. I know Smart and Brogdon weren't there, but Brogdon's perimeter defense hasn't even been that great to begin with. There was no excuse for the lack of resistance we saw the Celts put up defensively. Whether it was Franz, Paolo, Fultz, or Cole Anthony, they got into the paint/at the rim at will.

This wasn't a game where the Magic got prayers from deep. They only made 11 3PM on the night. Yet somehow they made 7 more FGM, and that's because they were aggressive. A total of 54-32 points in the paint difference, and that all starts at the top. If your guards/wings aren't preventing dribble penetration, and Rob isn't there to clean it up, this is what happens. Just look at the shot numbers around the rim from their main guards

add in 3 more paint FGA for Cole and 2 more for Fultz, and that made up the majority of their FGA. When we see this team struggle, more often than not a big problem is the guards are not providing any resistance. Considering this is what happened the last time these two teams played, I found that to be pretty fucking annoying. Make them shoot jumpers for crying out loud.

- On a night missing that much offense, the "others" were really going to have to show up. It couldn't just be a 2021 remix where Tatum and Brown do everything and hope it's enough. Just like back then, it wasn't! So to get a 2-8 (2-7) and 6 points from Al and just 4 points from Grant, that wasn't great. Add in 2-6 (1-4) from Payton, and unfortunately the depth didn't really do all that much outside of some solid Derrick White play and Hauser threes.

The killer one is Grant though. Coming off such a huge contribution to their win in TOR, we got the exact opposite in this game. When these performances usually come up, it's not just that he becomes invisible offensively, he legitimately hurts them. We can't live in a world where he has 3x the TOs as FGM, is gun shy when it comes to 3PA, and then of course there was the complaining.

This is tough because Grant 10000% was getting boned. Of his 5 fouls, I'd say 3 were brutal. The thing is, the more he complains, the worse it becomes. There was one stretch where this stood out and sort of shows what I mean. In this play, you can see Grant probably was fouled. Watch what he does

Is he sprinting his ass back on defense? No. He's yelling at the official. You can see right around midcourt he kind of realizes he's lost and isn't sure who to guard. Paolo now has a head of steam, and let's see what happens next

Is that a foul? I'd say 9 times out of 10 that's a play on, but because Grant had JUST spent the previous seconds chewing that ref out, the ref responded as you would expect. They are tired of hearing from Grant, it's that simple. I do not think it's a coincidence that the same ref Grant was yelling at for not calling a 50/50 play was the exact same ref that called a foul on Grant in a 50/50 play on the very next possession.

Even though Grant may have had a point (his screen fouls were also very bad), the point is nothing is ever going to change by him acting like this. Just fucking play. Yes, some of the calls in this game were bad, no shit. That's life. Play through the adversity and have the mental toughness to still make a positive impact.

Instead, Grant kind of imploded.

- Aside from getting killed in the paint, the Celts also got their asses handed to them in transition. You lose that battle 24-6, and I'm not sure what you're expecting to happen. Giving a young team confidence by allowing them to get on the break is easily a top 5 worst thing you can do, and yet the Celts never seemed to figure that out.

- I don't know how many games I've seen where the foul difference was 23-12. That feels a little imbalanced to me. A 24-11 FTA difference, those are the things that add up when you're on the road. Given how aggressive the Celts were in this game, I found it unusual that Tatum had just 6 FTA and Jaylen had just 2. That's not normal.

By comparison, the Magic bench unit had 11 FTA themselves.

The 24th ranked defense and a group that averages 20 fouls a night somehow only committed 12 fouls in this game. OK. Sure.

- The formula for the Celts is pretty simple. Move the ball, play defense, rebound, and don't turn it over.

Well, the Celts didn't really do any of those things. They lost the rebounding battle, and the turnovers, what the fuck. Honestly, what the hell.

They finished with 18 in this game which led to 19 points and if you've been paying attention you know this has been a big time issue in their last 3 games.

While 2 of those 3 were wins, that's sort of the exception not the rule. Being so careless with the ball is what is digging the Celts these 10+ point holes, and they've now fallen behind by 10+ in the last 4 games. That's nearly all TOs.

With this team what makes it frustrating is they are ALL live ball turnovers. Plays that just make no sense. During that 3rd quarter run with Tatum on the bench, what do you think sparked it for the Magic? Shit like this

If you want to know why the Celts got killed in transition, all you have to do is look at the turnovers. This was a night where having no Smart/Brogdon really made an impact because as good as White and Pritchard are, they aren't really offense initiators. This forced Jaylen to do most of the initiation, which isn't really his strength, especially going up against lengthy defenders.

- Jayson Tatum made a 3 to bring the Celtics within 2 with 6:20 left. Plenty of time to step up and close the game strong just like they've done in their previous 3 wins.

Instead…the Celts did this

3 points in half a quarter to lose a game to a bad team is very pathetic. Especially when both Tatum and Brown are on the floor. So when people say "oh the Celts didn't respect their opponent" etc, I don't really agree. They just failed to execute in the biggest moments. Both are equally as pathetic, but they are different. Last night wasn't really an effort thing, it was an execution thing.

The good news is the Celts are right back at it tonight with a chance to get this terrible taste out of their mouth. My guess is Al sits and maybe Rob plays, but the one thing we do know is the Heat are going to be aggressive. They are going to pressure the ball, they're going to be physical. If the Celts want to bounce back, they need to be much more prepared. I'd like to see them come out pissed off given what happened last night and make sure things don't snowball. This is the final road game before a pretty big homestand, so I'd prefer they keep the momentum rolling.