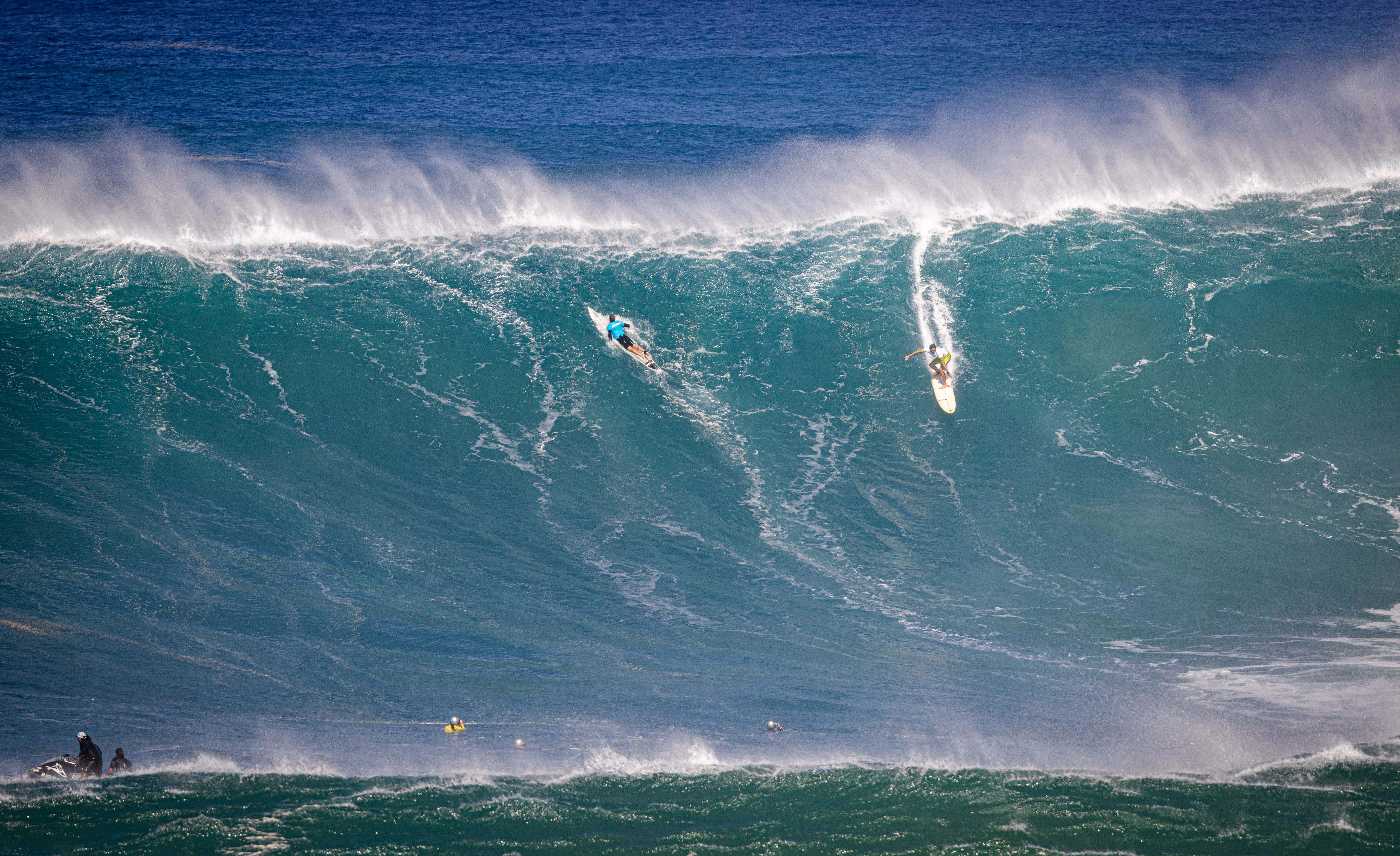 This past Sunday marked the tenth annual Eddie Aikau Big Wave Invitational aka "The Eddie", and things got batshit crazy for the lifeguards as swarms of bystanders got knocked down by one massive wave after the next despite constant warnings.

Incredibly enough, one of those very busy lifeguards - Luke Shepardson - took a quick break to win the tournament with an 89.1 out of 90 score, but we'll get to all that after some quick background.

The tournament's namesake, Eddie Aikau, was a pioneering big wave surfer and the first lifeguard at Oʻahu's Waimea Bay where he saved over 500 lives. In 1978 he was lost at sea in an attempt to seek help for fellow crew members aboard a sinking Polynesian voyaging canoe. (There's an ESPN 30 For 30 about him on Disney+ (Hawaiian: The Legend Of Eddie Aikau) that I highly recommend.)

There's even a saying among the lifeguards to this day when things are rough and a rescue seems especially dangerous: "Eddie would go." Via Inverse:

“Aikau was a legend on the North Shore, pulling people out of waves that no one else would dare to. That's where the saying came from — Eddie would go, when no one else would or could. Only Eddie dared. The phrase originated during the first Eddie contest."

So yeah - it's considered one of the biggest events, if not thee biggest event, in surfing. And it's a huge honor to be selected to participate because it's invite-only via the Aikau family. Oh, and the waves have to be monsters:

The tournament is known for a unique requirement that open-ocean swells reach a minimum height of 20 feet before the competition can be held. Open-ocean swells of this height generally translate to wave faces in the bay of 30 feet to 40 feet. As a result of this requirement, the tournament has only been held ten times during the history of the event.

After all, Eddie would look at those waves and go. So this year when the swell picked up enough for the green light, the call went out to 40 surfers and 18 alternates to grab their boards & travel to Waimea Bay.

The swell ended up being 50ft+ and that - combined with it being the first time in 7 years the tournament was held - meant an estimated 20,000+ people came to grab a spot. Many even camped out overnight to hold a solid viewing space.

Understandable to want to witness legendary surfers take on some of the biggest waves in the world, but it turned out to be a dangerous mix as huge clumps of bystanders ignored countless warnings from the lifeguards. In various videos you can hear them on their megaphones desperately trying to get parents of small kids to move them from the area.

"There's a big set that's coming up. If one of them doubles up it's gonna pin you and your children against that railing. Be aware - it's your fault, not the childs. Please do not put the kids in danger. Thank you."

And yet barely anyone listened.

Here's a few clips of how that went. Up first - an idea of how fast these waves come barreling in:

People getting slammed against the rocks & a quick shot of the same thing happening to people in the darkness which is even more terrifying:

People past the fences and warning tape getting wiped out:

Everyone trying to track down their bags & shoes:

An example of the types of injuries many got that day - a whole lotta scrapes: 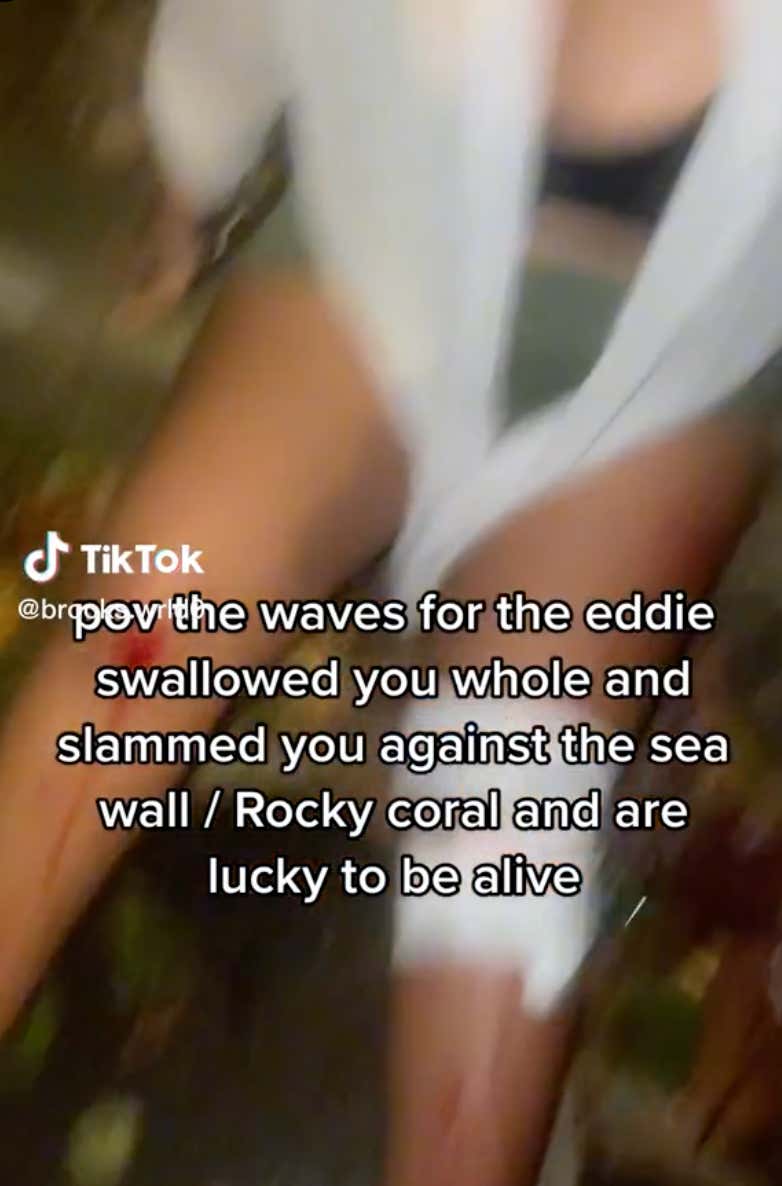 Man struggling for his life to save his backpack. It took two other guys to save him. 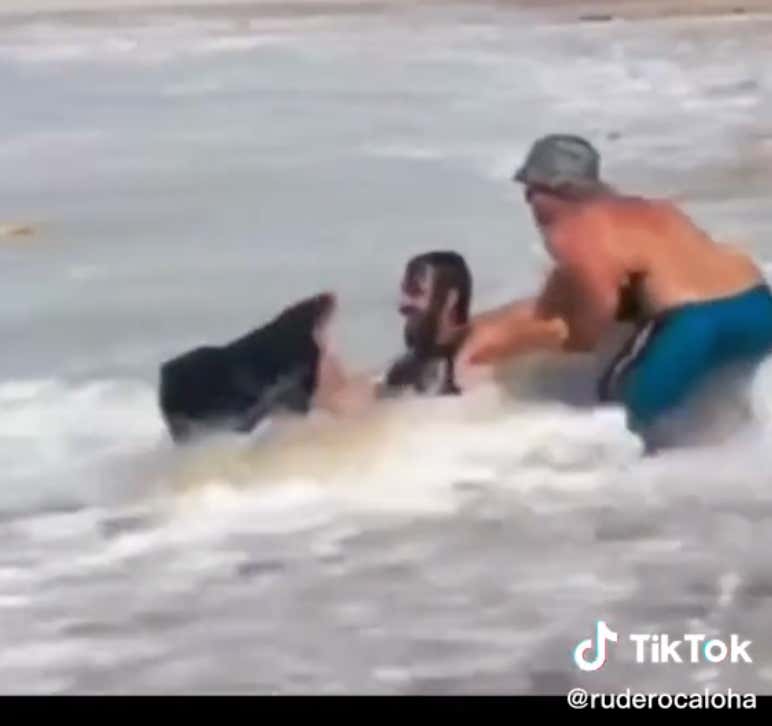 Warning, this one is tough to watch but thankfully this baby/toddler was also alright. For the life of me I cannot understand why you'd still be down there with anyone who couldn't fend for themselves if a big wave came. Thank God for those lifeguards because this child was feet away from being sucked out to sea:

And finally, this is just an awesome video of jet skis barely outrunning a big one:

Still, lost flops, scrapes and bruises and exhausted lifeguards aside, it looks like an all-time event. I'd love to be amongst my people - the annoying tourist group - there one day to witness it. Among the many highlights was the story of this year's champion, Luke Shepardson:

Shepardson’s Sunday started with lifeguard duty at Waimea Bay to assist spectators and fellow surfers in The Eddie before he competed it in himself and braved 50-foot waves en route to victory. He didn’t have much time to celebrate, as he went back to lifeguard duty that same afternoon.

“I woke up in the morning, got ready for work, got ready (for The Eddie) because I knew I was in the contest and showed up to work. We had quite a busy morning,” he recalled. “A lot of people were not heeding the warnings, they were going beyond the caution tape. We have the caution tape in places for a reason and a couple people almost got swept away first thing in the morning. Just doing announcements all day and it kind of helped because it took my mind off of the contest and I was just focused on what I do — being a lifeguard at work.

“Then when it was time for me to surf, it was just another day surfing and I was really stoked to get a few good waves and win the contest.

“The end of the day was back to work and trying to keep everyone safe, make sure everyone listened to our warnings and I’m glad everyone got home safely and there were only a few injuries. They’ll live to fight another day.”

Come Monday morning, it was back to work again for Shepardson.

Pretty impressive to say the least & definitely someone I think Eddie Aikau would be proud of. Congrats to him.

Another bonus of the day, six women participated and Andrea Moller made history as the first female to ride a competitive wave at “The Eddie". Good stuff.

Check out the full stream & marvel at the size of the surf while you think, "oh hell no, not the sport for me to try", here: