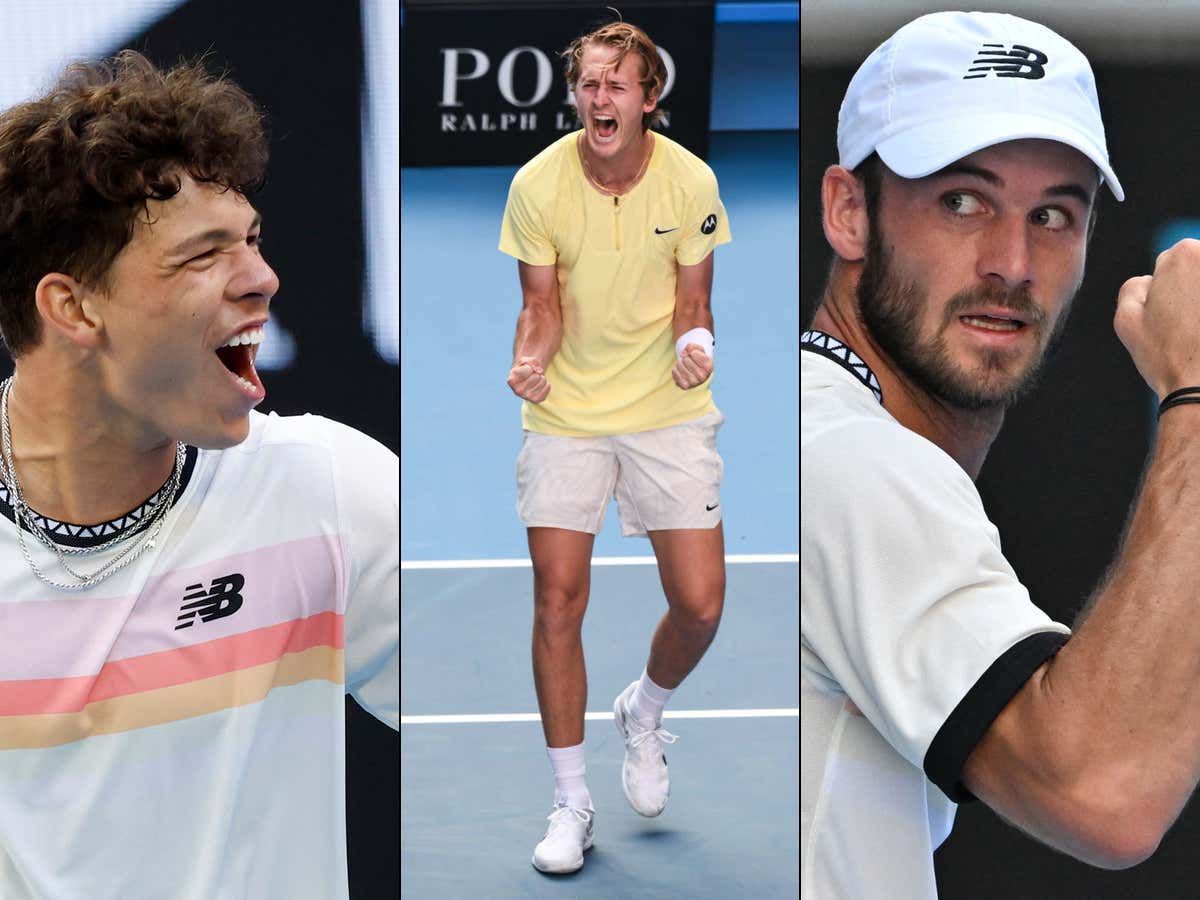 We're down to the final eight over in the men's side of the Aussie Open and it's a pretty sight to see. Why's that? Well, for the first time in over 17 years we've got three Americans still in a grand slam dance with a fighting heartbeat — Sebastian Korda, Tommy Paul, and Ben Shelton. 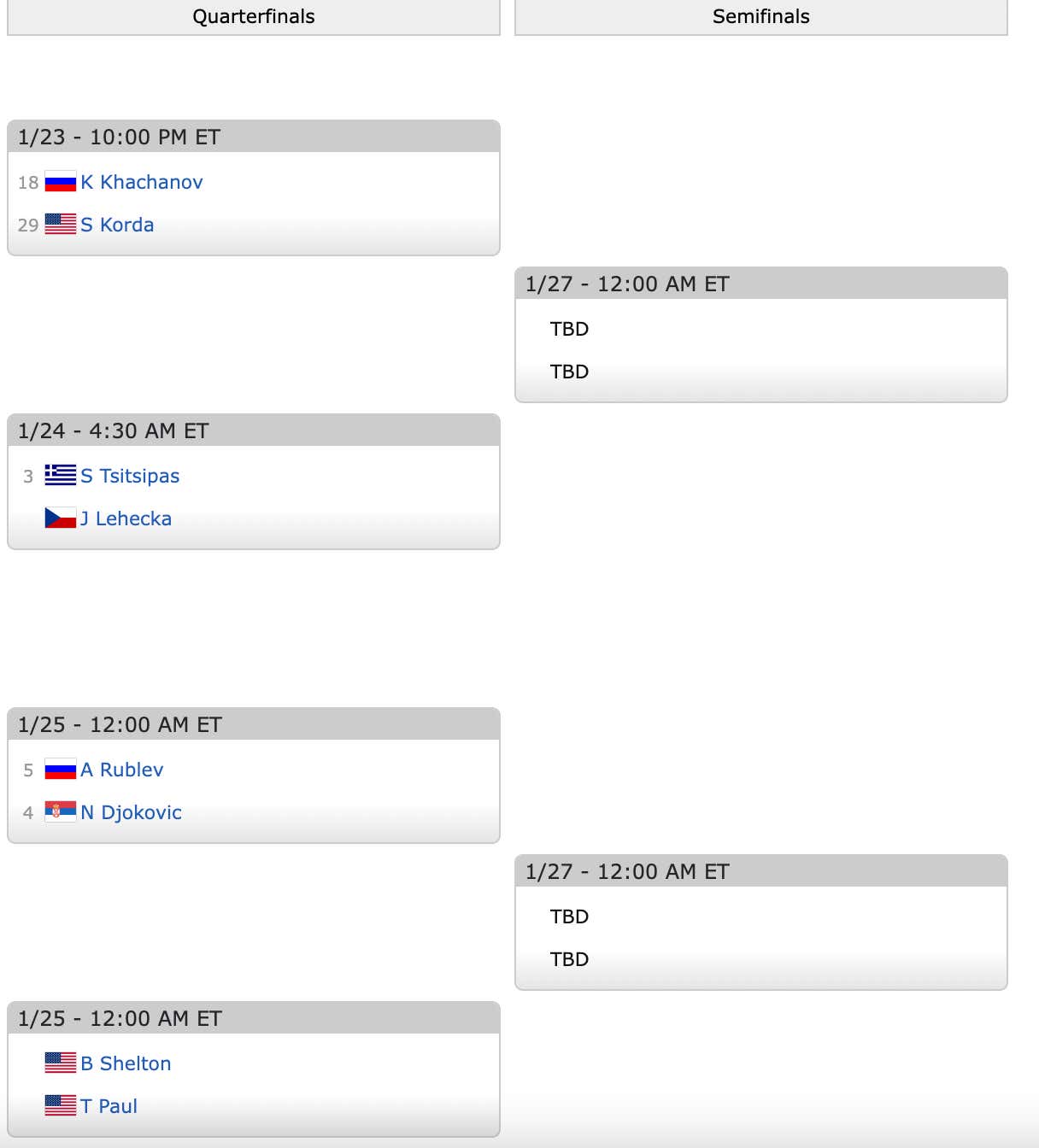 I understand tennis isn't the most popular sport over here in the States, but this breakthrough is pretty fucking cool. Let's learn about the three studs still alive.

One of the bigger stories of the entire tournament may very well be Ben Shelton's arrival. This is the 20 year old's first trip outside of the United States. Vacation, studying abroad, nope the man got his passport to go play in the Aussie Open and my god is he making the trek worth it. Shelton has shown in these four matches why there's so much hype around him. He's got an incredible live arm which helps him hit rocket serve after rocket serve that can regularly reach 130 mph. In his past three matches he's been broken one total time.

Now we've seen Americans in the past be able to hit big serves, but do nothing else (I.e. John Isner). Shelton has so much more to offer than just his serve. He's balanced from his forehand wing as well as his backhand and has no fear of coming to the net. He's a human highlight reel and he hits the ever living shit out of the ball.

Shelton is insanely talented, confident, and fearless. He is a man to be feared on the tour for years to come. Scariest part is he's only scratching the surface of what he's capable of. Kid seems to have a good head on his shoulders as well.

The 22 year old Seb Korda has put his game all together this tournament and it's great to see. Korda has had troubles in the past of closing out matches and containing his nerves. He's still not totally over it, but he's made major strides in that department no question about that. Korda is one of the best returners in the game and can create a lot of problems on his opponent's serve. His win against Poland's Hubie Hurkacz last round was gigantic and huge for his growth in the mental department. This match point was incredible. Dude has big balls.

Sebi comes from a family loaded with athletes. You probably know his sister Nelly, currently the 2nd ranked player on the LPGA tour. His other sister Jessica has racked up six wins on the LPGA tour herself. His dad Petr carried the tennis gene and actually won the Aussie Open back in 1998, once achieving the number 2 ranking in the sport. His mom Regina reached as high as 26th in the world in women's tennis. They're the country club Gronks and Sebi is doing his best to carry his dad's torch all the way to his own Aussie Open title. His serve used to be a big weakness, but he's put that area to a focus in the past year or so. It really just comes down to his mental game which will hopefully get better and better as he progresses on. Korda gets the tricky Russian Karen Khachanov next, who seems to regularly be going deep in slams of late. Vegas has Korda listed as a slight favorite right now and I love that.

For anyone thinking these guys don't stand a chance against Djokovic, well Korda took a set off him at a lead up tournament final a few weeks ago. Novak's hamstring has been a problem for him so far, although last night you wouldn't know. Still, anything can happen.

Make no mistake about it I love Tommy Paul. Ever since his 2nd round upset of Grigor Dimitrov at the Aussie back in 2020 I've been a fan. He also came into the office before the following year's US Open and kicked all of our asses in ping pong (still not sure where that video went). The guy is the absolute man and so fun to watch play tennis. When he first burst onto the scene he was heralded as a big time deal and that win at the Aussie only helped fuel the hype. There was about a year and half stint where he kinda faded away and didn't look too promising, but over the last year a lot has changed and he's risen back up the rankings. You might as well call him the new King of Spain because with his win last night against Bautista-Agut he's now won 11 straight matches over Spaniards. No chance Tommy wins this match two years ago. Zero. Roberto Bautista Agut is a pest who puts so many balls back into play, allowing opponents to get frustrated and fuck up. Tommy Paul refused to do that last night and completely out-played him in a super impressive showing.

You'd have a hard time finding guys on the tour who are faster than Paul. He's got incredible creativity with his shots as well which only adds to the fun.

Gotta imagine having Paige Lorenze in his player's box every match is helping his motivation.

Yeah, it's good to be a good American tennis player. Paul gets Shelton in the next round meaning we're guaranteed to have an American semifinalist!  Possibly two if Korda does his thing. At the moment Tommy is listed as a -220 favorite which feels high considering what we've seen from Shelton. Paul does have the game to extend points and make Shelton rack up the unforced errors so we'll see.

And we've got ten of them in the top 50 of the new rankings!

Women's quarterfinals tonight with America's hopes clung to Jessica Pegula, daughter of the Buffalo Bills owner. She's never had a better shot of winning a slam than how the tournament currently is shaping out. She gets Azarenka tonight at 3am and is about a -230 favorite as I type this.