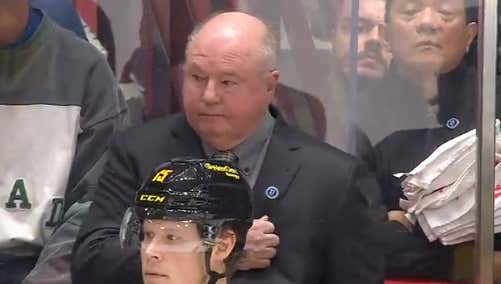 What the Vancouver Canucks management is doing to Bruce Boudreau right now is about the most gutless shit imaginable. Here's a guy who knows that his days are numbered. It's only a matter of time before Bruce Boudreau gets fired as the head coach of the Canucks and Rick Tocchet comes in as his replacement. But instead of just ripping the band-aid off and firing the guy, they're taking their sweet ol' time and keep having him show up to work every day not knowing which one is going to be his last. Not knowing if today is going to be the day he gets called up to the office and told it's over.

Now most people in that situation would simply just mail it in. If you know you're about to get fired, you might as well just keep collecting that check for as long as you can without actually doing any work. But Bruce Boudreau is too classy for that, and the game means too much for him. So he's going to keep coaching this team to the best of his ability, but still knowing that it's any day at this point. Clearly that's starting to take a toll on the guy.

Goddamn that's tough to watch. It obviously makes it harder since Bruce Boudreau is essentially hockey's happy-to-lucky grandpa right now. You never want to see your grandpa choke up like that. Heck, you can't even believe that's an emotion he's capable of feeling. So to see it happen just crushes you. Makes you want to drive your fist through the face of everybody involved with the Canucks organization. But while management is treating Bruce Boudreau like dog shit right now, at least the fans in Vancouver are there to pick up the slack.

What a great chance for the Canucks organization to finally just end this. Obviously the Canucks play again tonight so it might be tough to let him go on a game day. But the Canucks suck and should be tanking for Bedard anyway, so who cares? Seems more humane than to send him out there again. What do you want him to do? Literally break down in tears on the bench? That was a perfect send off for the guy. Serenaded by the fans, getting a chance to really savor that one last game, and now let the man ride off into the sunset. 1,086 career games behind the bench in the NHL. 16 years, 4 organizations, a Jack Adams Award in 2007-08. The man has given enough to the game of hockey to keep getting toyed around like this.