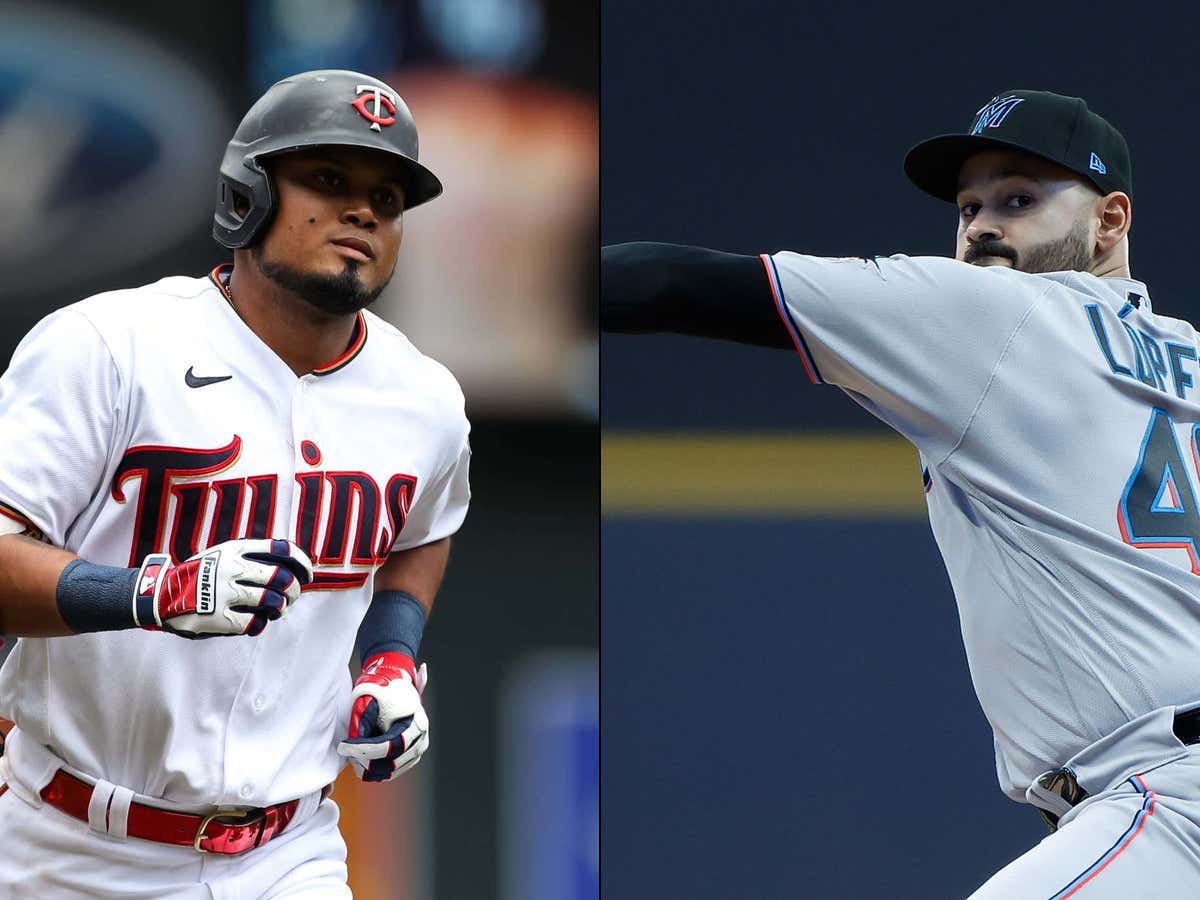 The Twins and Marlins just finalized a trade that's seemingly been in the works for weeks now. The main pieces moving that you'll know? The reigning AL batting champion Luis Arraez is heading to the Marlins in exchange for starting pitcher Pablo Lopez. A few hitting prospects from the Marlins system are also headed to Minnesota in the deal that we'll get into. Arraez is the first batting champ to be traded in the following offseason since Rod Carew in 1978. This isn't a trade that's gonna shake the core of the Earth, but it's a Friday and we've got some noticeable pieces moving so let's talk about it and then you can get mad at me for my thoughts.

For a little while now starting pitcher Pablo Lopez had been on the trade block. Last summer the Yankees reportedly had a deal lined up for him that would have centered around Gleyber Torres going to the Marlins, but it fell apart at the last minute. At the time I was for it considering the Yankees had just traded away Jordan Montgomery out of nowhere and were in need of another arm for the rotation. It was such a bizarre out of left field trade that it caught pretty much the whole fanbase off guard. Now looking back I don't know what I'd do without Harrison Bader on my team. I fucking love that guy.

The baseball world is naturally torn here with the nerds saying Minnesota robbed Miami and the eye test fans thinking the other way around. Alright maybe "torn" is an exaggeration. They might spend all of 90 seconds talking about this on SportsCenter tonight, but to me it's interesting.

It's worth noting the baseball trade values above tend to favor guys with team control a lot more, hence why Salas is at 20.5 despite not even playing in Double A yet. It's a polarizing trade to the point if you try to take one side you just get screamed at online by the opposition. Sounds like Twitter to me! Exciting stuff.

Now let me tell you about Luis Arraez real quick. Everyone team in the AL Central is jumping for joy in unison as they realize he's out of their hair forever. In terms of putting up fantastic at bat after fantastic at bat there are not many better hitters out there than Arraez. Here's his breakdown over his first four seasons in the big leagues, concluding with the AL batting title in 2022. 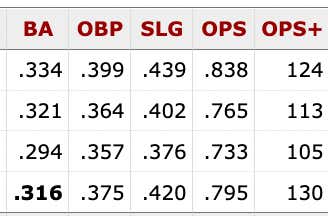 When you're crafting up a leadoff hitter it doesn't get more ideal than Arraez. He's going to put the bat on the ball constantly, find holes, and walk more than strikeout. Eye test wise he's a fucking dream to have in your lineup setting the table.

Factor that in with his team control that runs through the 2025 season and the Marlins have a great bat slotted in at the top of their lineup for a while now. The problem the nerds have with him is that he doesn't hit for any power (14 career HRs in 1500 plate appearances). He's also not a good defender which doesn't help his case with the nerds calculating his value. Don't tell them he had the same WAR as Rafael Defers (4.4) last year though. Here's a glance at where he ranks across the board. 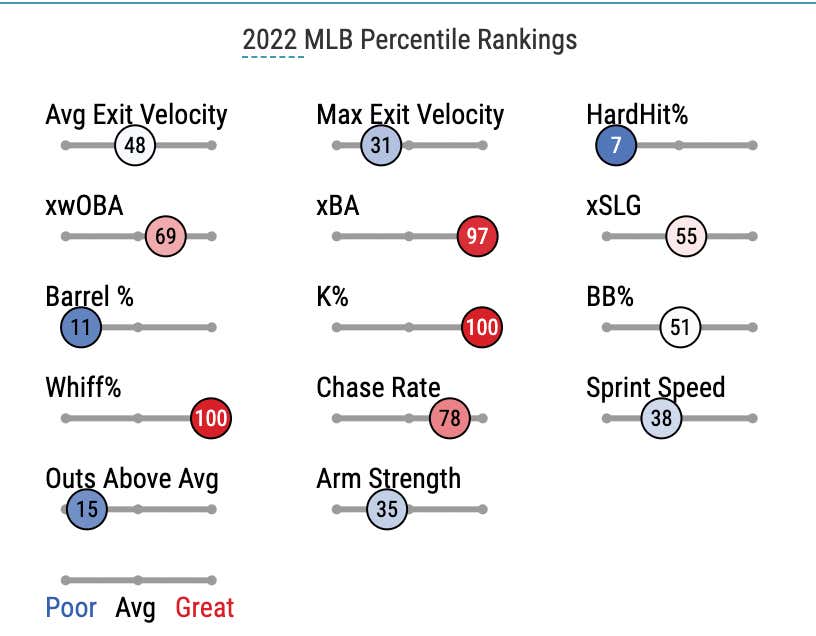 Then there's Pablo Lopez, the supposed steal of this trade who is going to help reshape the Twins pitching staff. Now don't get me wrong Lopez is solid, I'm not here to shit on him, but I also don't understand the hype surrounding the guy, especially with the above trade value setting him at a whopping 38.8. His first half of last season was excellent posting a 2.86 ERA over 18 starts. The second half was quite the opposite with a 4.97 ERA over 14 starts. For his career he's a whole run worse on the road than at home and he's never thrown 200 innings. Again, I think he's fine as your 3 and I suppose in the Twins rotation as a low end 2, but this lust for Pablo Lopez doesn't make a lot of sense in my head.

Now along with Lopez the Marlins are also sending their number 5 ranked prospect SS Jose Salas to Minnesota as well as OF Byron Chourio. From my understanding the Marlins farm system desperately lacks offensive prospects and is FLOODED with talented pitcher after talented pitcher. While Salas is ranked high in the system, I think that might be an indictment on the organization more than what he can bring to the table. He slashed a so-so .250/.339/.723 between two A ball leagues in 2022. Yes, he's only 19, but I don't know if he makes me feel any better about losing a bat like Arraez.

All I'm trying to say is that I don't see Minnesota robbing the Marlins of much here. If anything it's a win-win, solving both teams' issues. The Marlins needed to give up Lopez at some point to upgrade their offense since they don't like to spend money on free agents and their prospects don't have much to offer in that department. With the young studs like Eury Pérez, Max Meyer, and Jake Eder they have more than enough to let a guy like Lopez go. That is assuming Meyer and Eder bounce back from their respective TJ surgeries. To me adding Arraez helps them a lot more than keeping Lopez.

As for the Twins their rotation now becomes Sonny Gray, Pablo Lopez, Joe Ryan, Tyler Mahle, and Kenta Maeda. That doesn't jump off the table if you ask me. It's deep for sure which is clearly the plan since them getting a true ace wasn't in the cards. For the Twins I suppose it works, but for anyone trying to win a World Series that can't be taken too seriously, no offense.

I just don't care what numbers you throw out to try and point me in another direction you cannot convince me Luis Arraez for three years of dirt cheap team control is a bad move to make here if you're Miami. He fits what they need. A top of the order presence who they don't have to worry about paying. Does he make the Marlins a bonafide playoff team? No, but he definitely makes them better. That dude is a nightmare to try and get out. Can't have enough of those players in your lineup. From almost getting Gleyber for Lopez last season to now getting Arraez I think you have to be pretty happy if you're Miami. Less power sure, but way, way more consistency.

Also this is kinda fire

P.S. I want to fully admit it's possibly my brain is skewed about Lopez because the only times I really saw him pitch last year came when he faced the Mets. Those 5 starts? 22.2 IP 39 hits 24 earned runs. Now if you're the Twins you know he's not facing them anymore which is great news. In theory maybe he's a way better pitching in the AL Central than the NL East? The new schedule realignment doesn't exactly help that logic since you play your division less, but maybe less Mets is music to his ears.