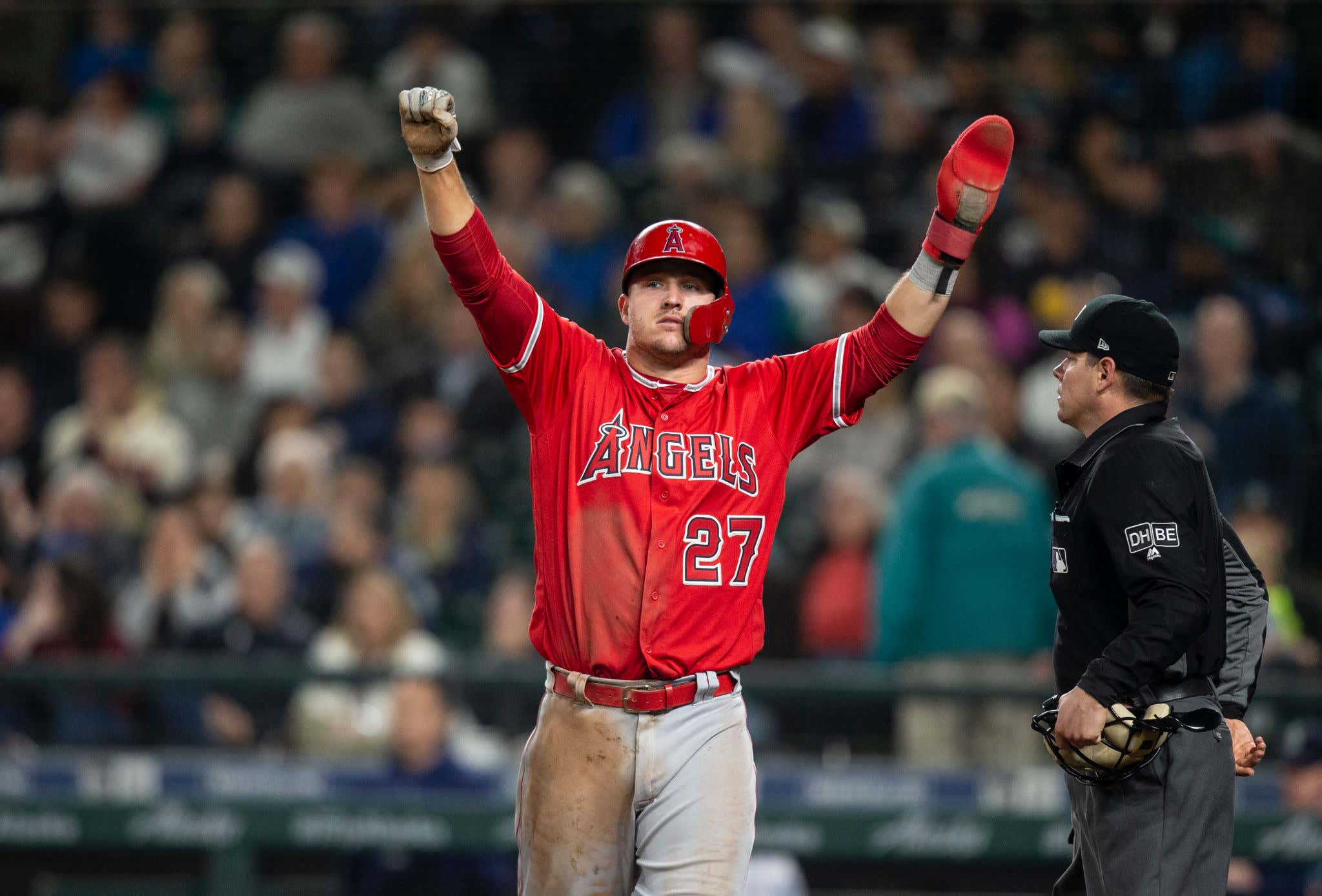 Over the past couple of years, there have been quite a few baseball legends passing away. Hank Aaron, Joe Morgan, Tom Seaver and Bob Gibson have all died just in the 2020's alone. It did get me thinking of who we would now consider the ten greatest living baseball players. It used to really mean something to be called that. Joe DiMaggio used to insist on being introduced as the "greatest living ballplayer" (even though he never actually was. Babe Ruth, Ted Williams and the guy I have as number one on this list all were ahead of DiMaggio). For me, the number one selection on this list is pretty easy but after that, it does gets tough and some of the names I left off surprised me. I'm sure you could ask 100 different baseball fans and get just as many different lists.

Trout is the only active player on the list. He's also the only one to never win a playoff game. His last decade of dominance overshadows all of that. He has three MVP awards and has been the best player in baseball for ten years. Very few (if any) other players over the last 100 years can make that claim. Most great players have a rival. For DiMaggio, it was Williams. For Mays, it was Mickey Mantle and then Hank Aaron. Barry Bonds had a long stretch of being elite but even then;  many fans would have pointed to Ken Griffey Jr. or Alex Rodriguez as better players at certain points of his career.

Mike Trout has stood alone as the absolute best. That's why the contrast of playing on a shit team that has had a losing record for each of the past seven seasons is so odd. 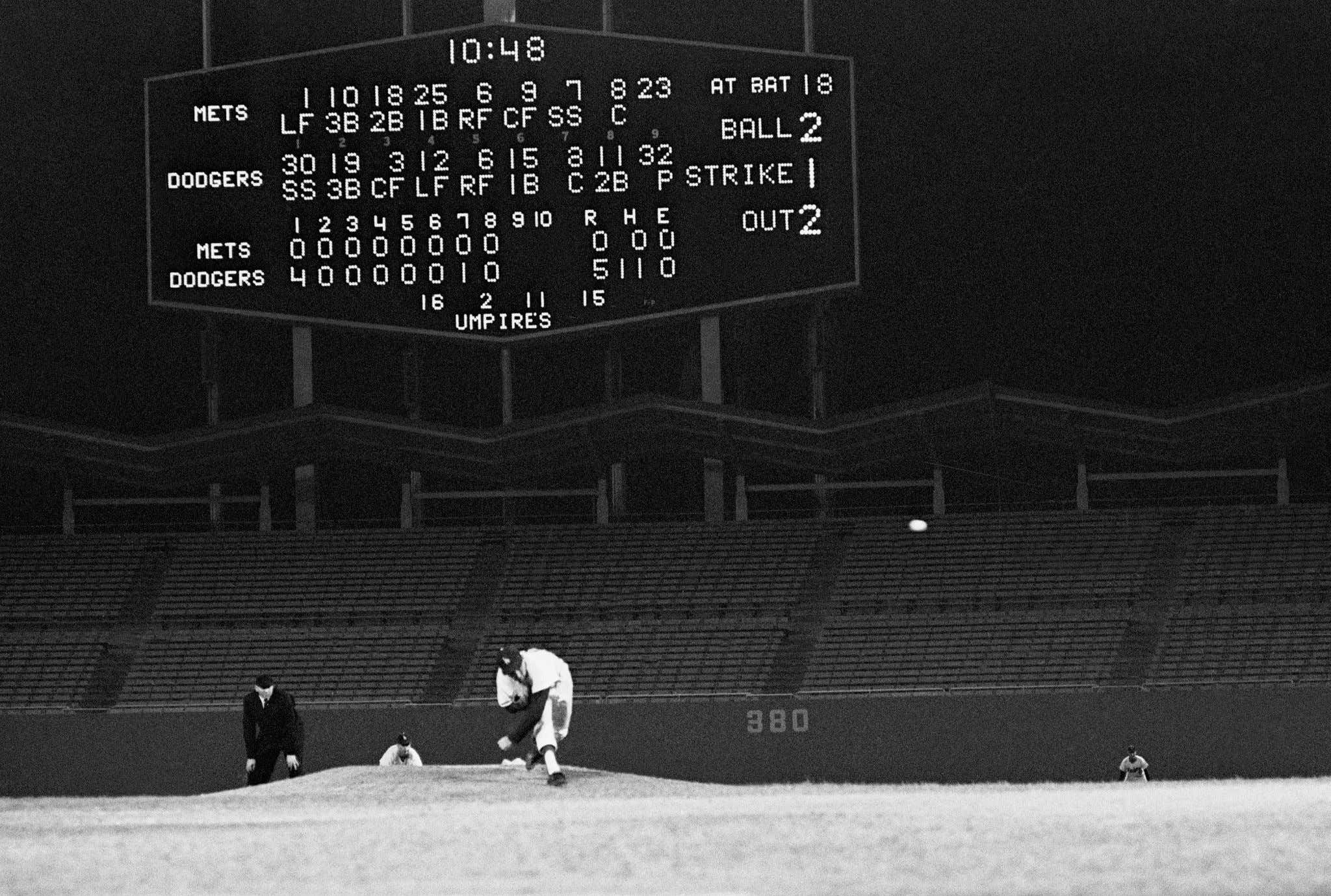 Sandy Koufax made the Hall of Fame in 1972…and he's still alive! He's been a Hall of Famer for FIFTY YEARS. In 1966, he had to retire at the age of 30 due to arthritis in his elbow. He left baseball while he was in a stretch of being the most dominant pitcher in all of baseball. Only Lefty Grove, Greg Maddux and Pedro Martinez even come close to being that much better than everyone they played against. Back then, the best pitchers threw every fourth day and Koufax had pitched over 310 innings (not a typo) three times over his last four years. He also led the league in ERA in each of his last five seasons.

He was the biggest part of Dodger teams that won the World Series in 1963 and 1965. He was the World Series MVP each of those years as well. I've wondered how great his career stats would have looked if he never had to retire so young. But there is something mythical about this amazing pitcher who was only brilliant for a short time and left at the peak of his powers. 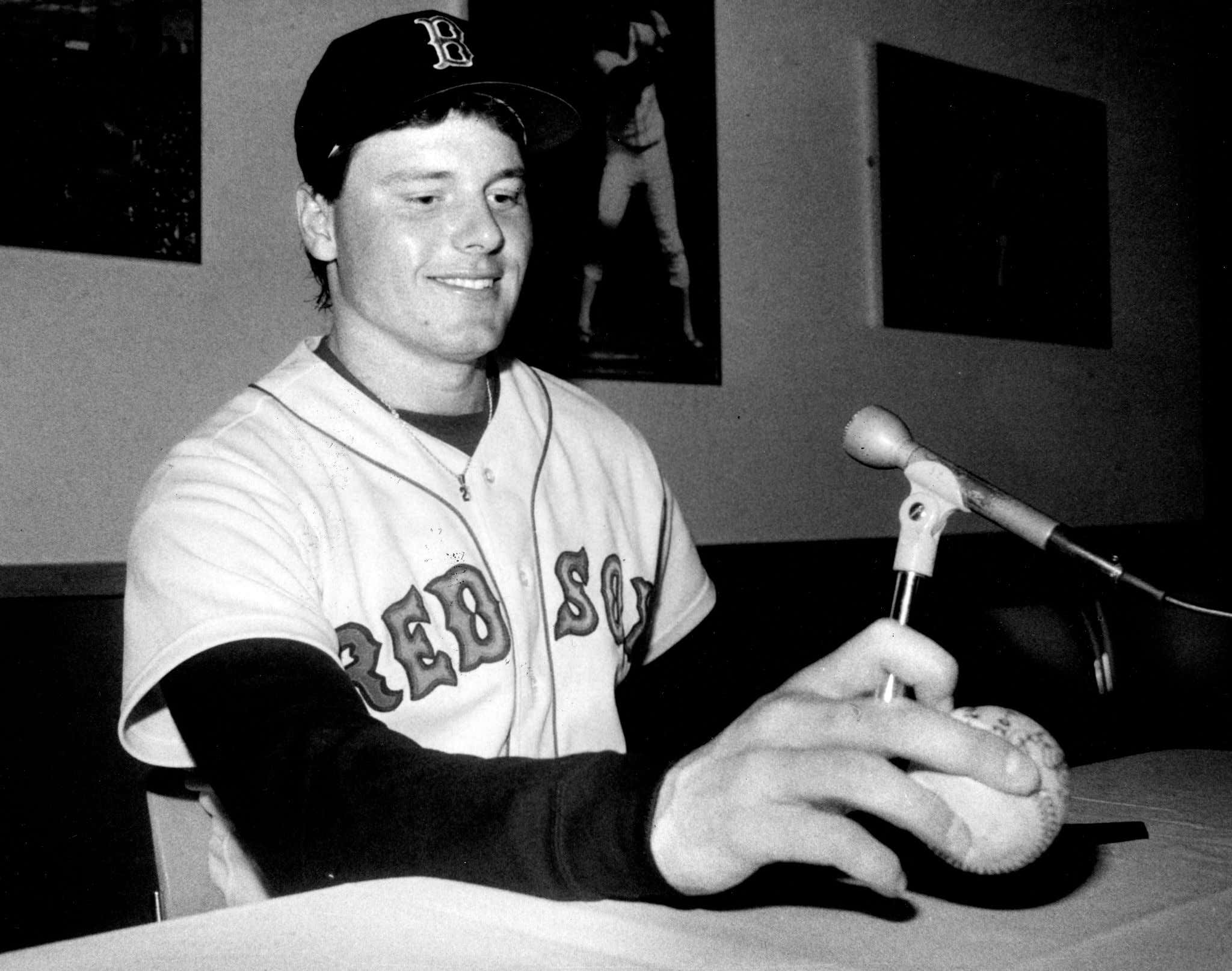 Where you have Clemens ranked on this list is going to run in lockstep with how you feel about steroids. I look at his last four years with the Red Sox (1993-96). There is a pitcher that while still very good was also clearly on the decline (40-39, 3.77 ERA). He was also a teammate of Jose Canseco with the Sox in 1995-96 and did strike out 20 Tigers in a game in late 1996. So did the PED use start then? He was absurdly great in Toronto before going to the Yankees and slumping back again the first couple of years in the Bronx. The Mitchell Report clearly states he was using by that point and his time with the Astros (38-18, 2.40 ERA) makes no sense for a guy who was already over 40.

So how do you evaluate him? He was a great pitcher with the Red Sox before the PED's so that has to be considered. If I was starting a team tomorrow and you could somehow draft him all over again, I'd still take him over HOF pitchers like Tom Glavine and John Smoltz. But I'd be lying if I said I was thrilled about having him on this list at all. 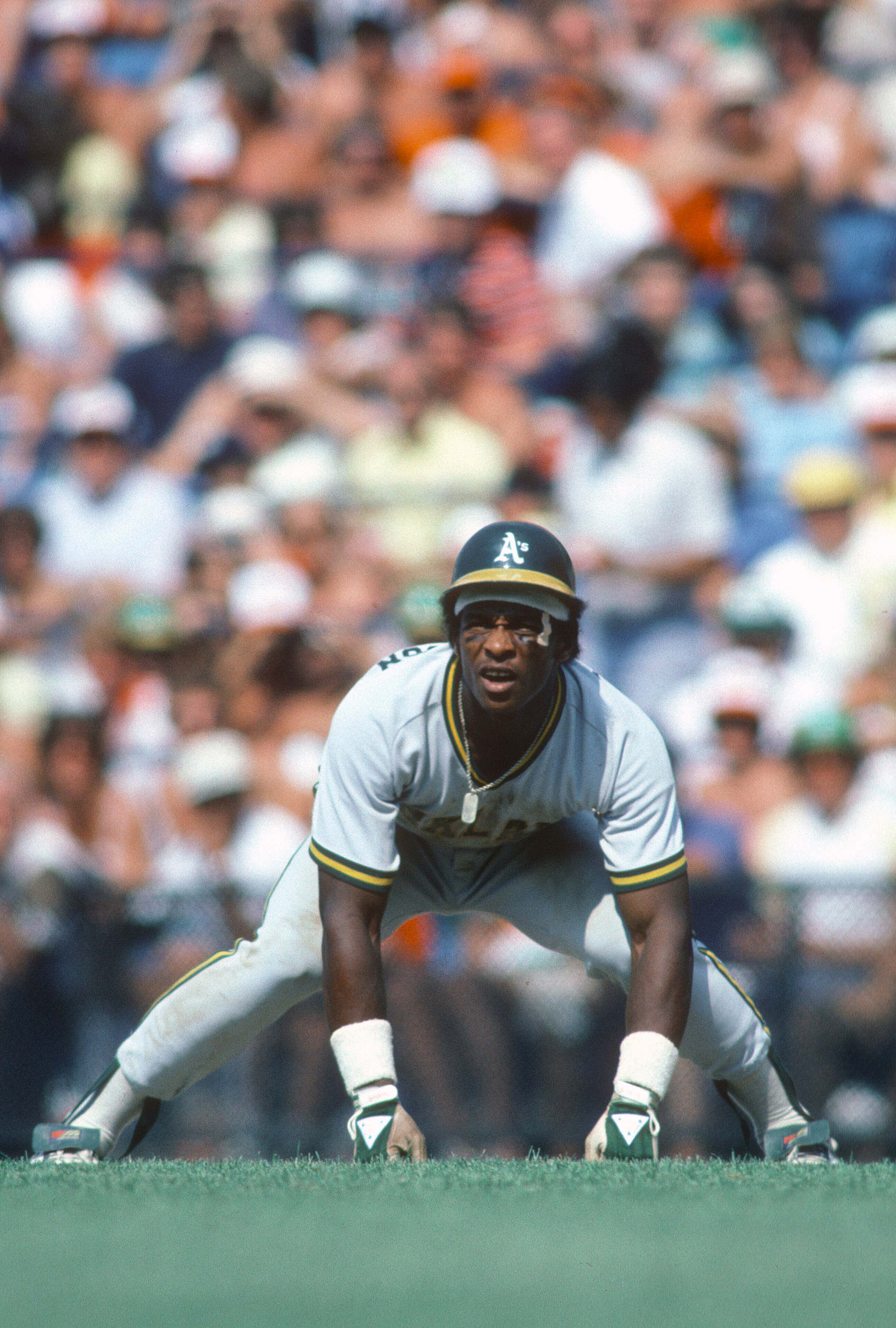 Rickey Henderson's skillset was like if the greatest player from the Dead Ball Era jumped into a time machine and landed in the 1980's and 90's. Tim Raines is the closest modern comparison and while I loved Raines, he was always a poor man's Rickey. There is no one like him at all in today's game. Not even close.

He stole 130 bases in 1982. He scored 146 runs in 1985. Rickey is the all-time leader in Runs and Stolen Bases. He's second in walks (only behind Barry Bonds). He played as long as he could until no team wanted him anymore. I got to see him play in person for the New York Yankees when he was in his 20's and  for the Newark Bears in 2004 when he was 45. He was always the most exciting player on the field. 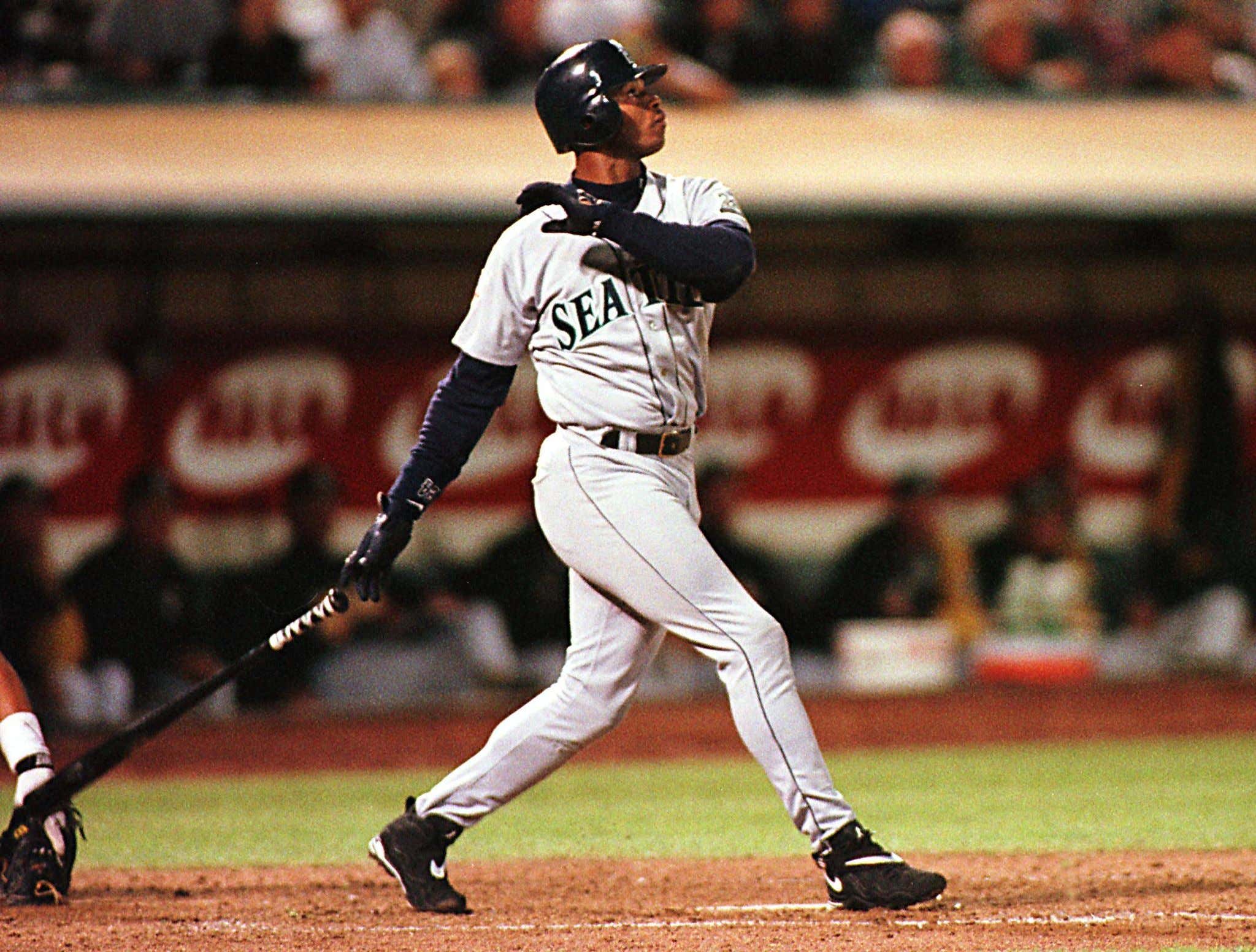 Maybe I have Griffey ranked too high. His time with the Reds were extremely frustrating. He was the first guy I can remember who people thought could really have a shot to break Hank Aaron's record. Griffey never came close and finished 125 homers away. In fact, when he was done playing, it wasn't even Aaron's record anymore.

But anyone who was alive when he was playing those first 11 years with the Mariners knows Griffey belongs on this list. He was great in center field and still has the best swing I've ever seen. It's easy to look at some players and see the lost potential but it's important to remember how great they were too. For me, Griffey in that time was as perfect as it gets. 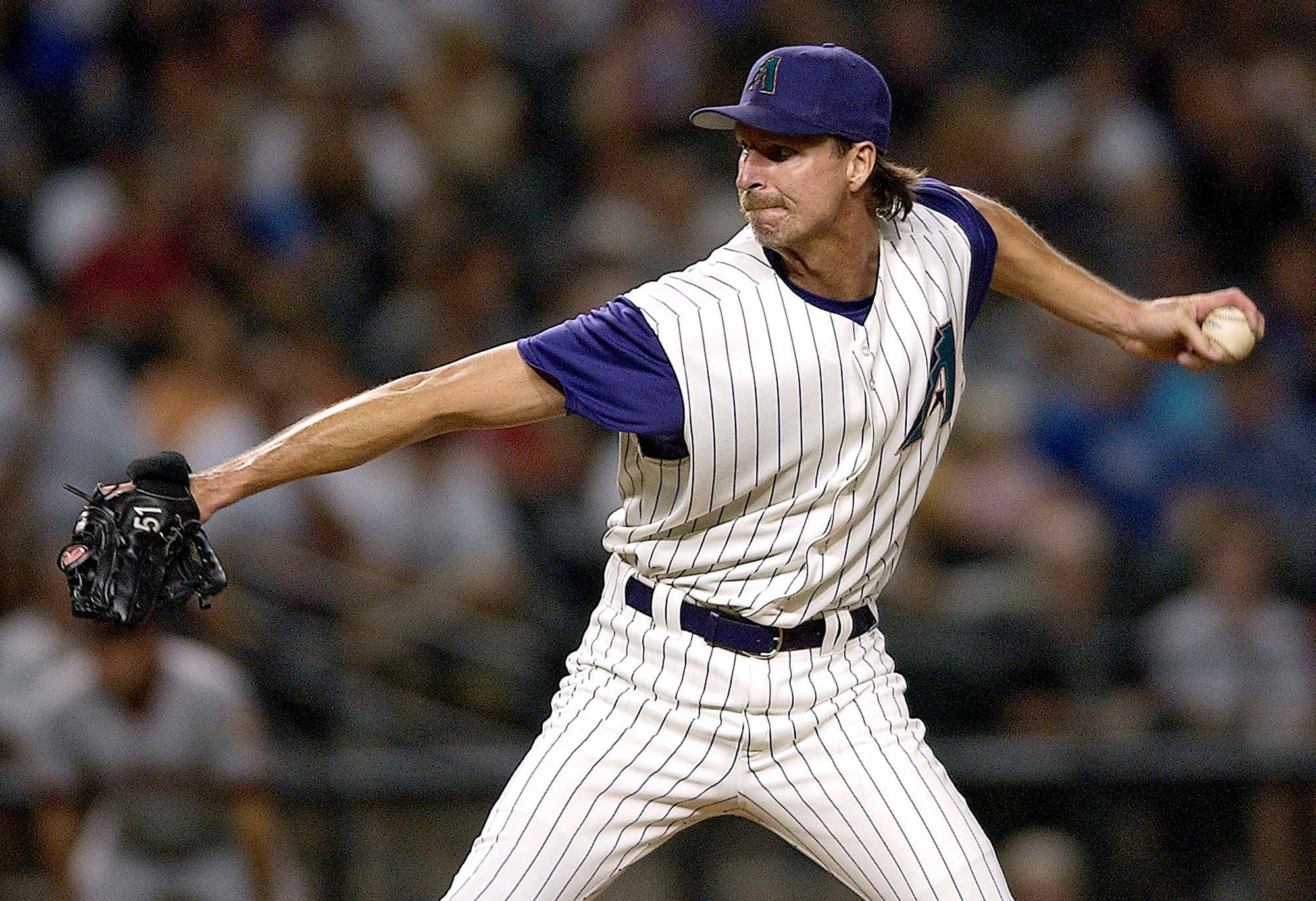 I doubt there will be too much debate about the Big Unit on this list and 5th seems about right for him. The question for me about Johnson is: was he better with the Mariners or Diamondbacks? He did spend eight years with Arizona which seems like a lot for me because I always forget he went back there for two years after he was with the Yankees. But even then, he spent more time in Seattle pitching ten seasons.

He went with the Arizona Diamondbacks cap on his Hall of Fame plaque. He made the right call. 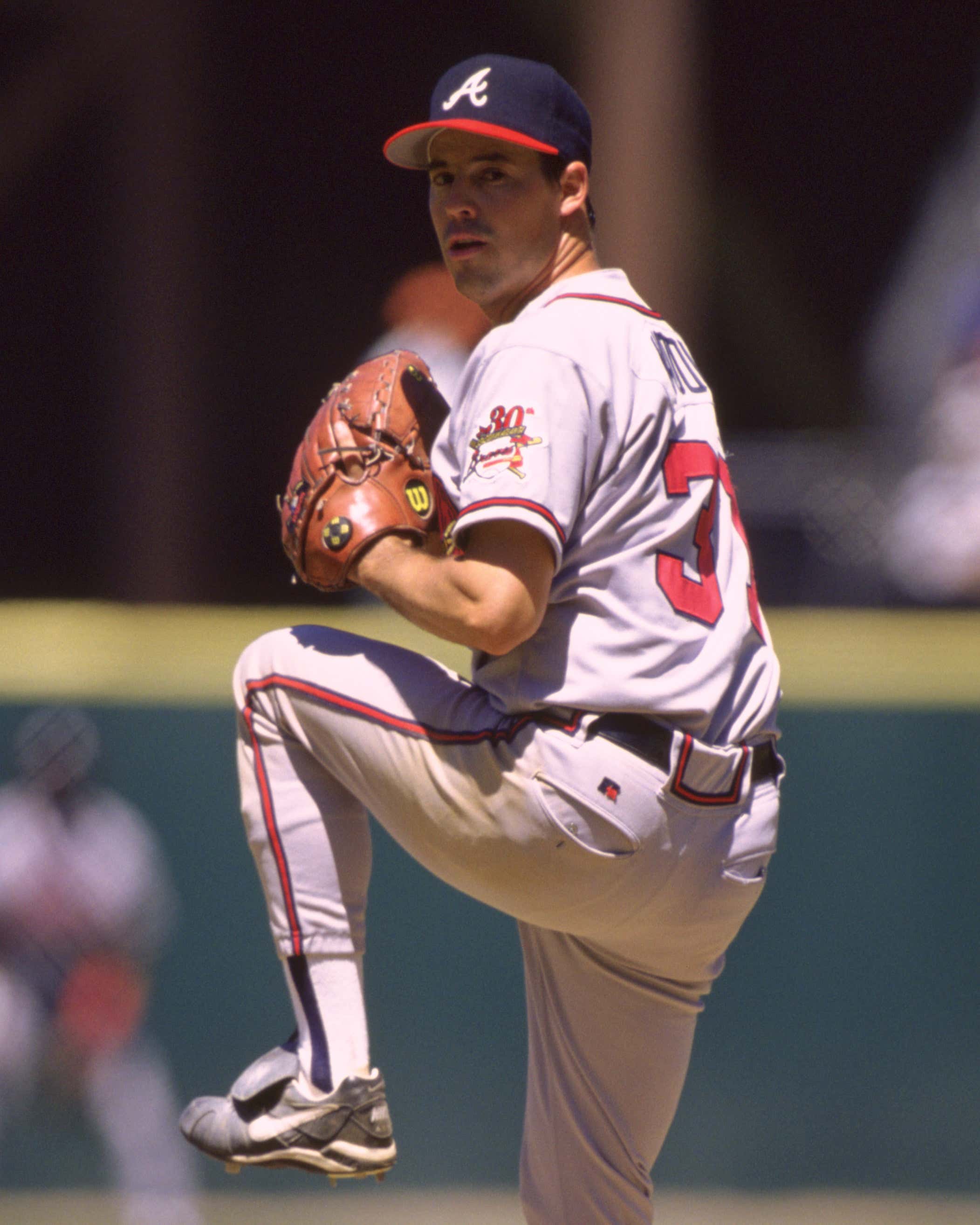 I hate to say he hung around too long because he was still a quality starting pitching option for the back of any rotation up until he retired at 42. But he was consistently average the last five seasons of his career. I think this may have affected his legacy a tiny bit. I feel like he doesn't enough credit for how great he was from 1992-98.

Maybe part of it is because he was also in the greatest pitching rotation ever along two other Hall of Famers. It's not like Pedro Martinez who was stuck in a staff with Pat Rapp and a broken down Bret Saberhagen. The other thing that hurt Maddux was that his greatest seasons were the strike affected 1994-95. He did win the Cy Young both years but he also didn't win 20 games in either season despite going 35-8 with a 1.60 ERA in the two seasons combined. Keep in mind, this was right at the beginning of the steroid era when guys were absolutely crushing the ball.

It could just have been his personality. He wasn't flashy and charismatic like Pedro or intimidating and grumpy like Randy Johnson. He was just the best pitcher in baseball for a six year stretch which was in the middle of a durable career that saw him win 355 games. 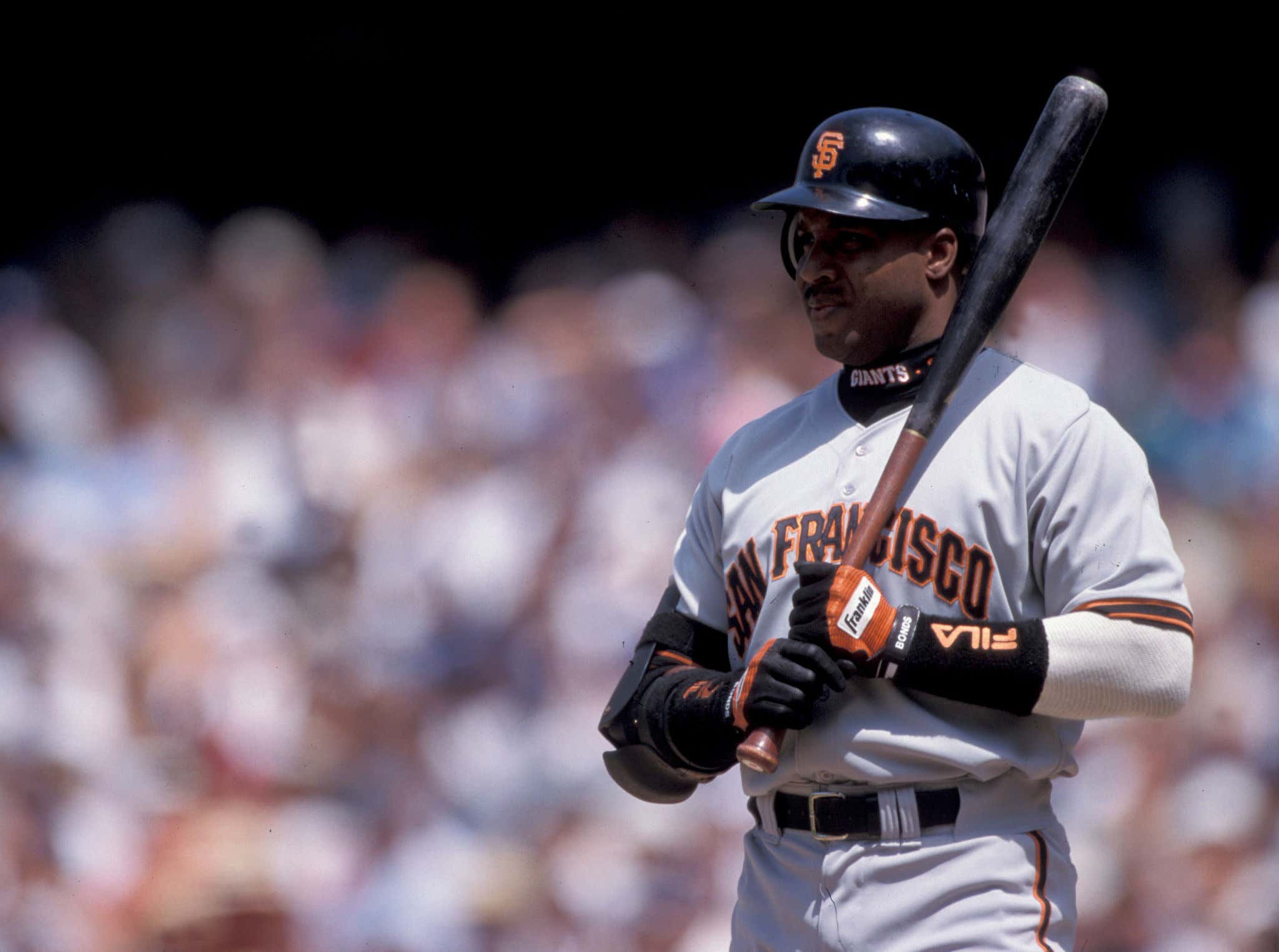 Unlike Clemens, we know exactly when Bonds starting using PED's. The book Game of Shadows says it was after the 1998 season and you see a huge jump in his stats starting around 2000. Other than Babe Ruth, no player was better at baseball than Barry Bonds from 2001-04. But he was also cheating. I'll often hear "Everyone was doing it!" but that's not true. Of course many players were but it wasn't everyone. It makes putting a list like this together really hard. We know Bonds and Clemens were using PED's but Sandy Koufax wasn't. I've left guys like Mike Schmidt, George Brett and Cal Ripken off the list. I can safely say they weren't either.

So how do you judge someone whose numbers were so insane because he was cheating? Bonds is a special case because we know how great he was before he ever hooked up with BALCO. He won three MVP's and was along with Griffey, the most well-rounded hitter in the game. Bonds without PED's was better than Griffey at his peak. So I put him third. I'm guessing younger people think he's too low and maybe older readers think I should have him lower or not on the list at all.

He was great. He cheated. He got even better. I don't like it but he has to go somewhere. 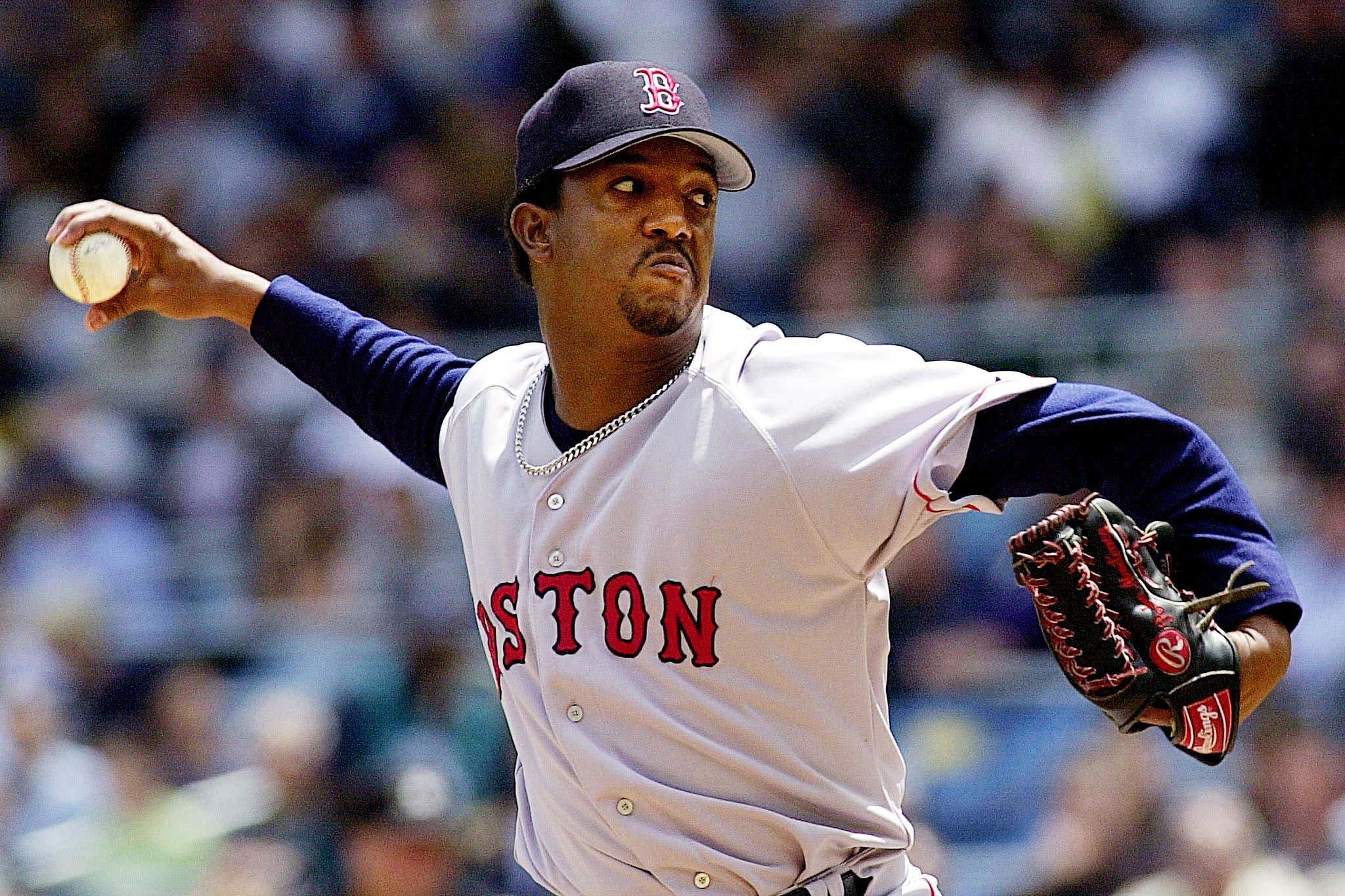 If you are reading this and can't believe I would have Pedro ahead of Barry Bonds, you have every right to disagree. But I don't give a fuck. It's my list and I love Pedro.

His stretch of 1997-2003 was probably the greatest run a pitcher has ever had. Sandy Koufax had more team success during his peak but it was also during the pitching heavy 1960's. Greg Maddux's peak was during the 90's like Pedro but he didn't have to face a DH. I got to live in New England during Pedro's dominant run and I was lucky enough to see him pitch in person a couple of dozen times. You almost always saw something special every time out. His 1999-2000 seasons were the absolute height for him (or any pitcher).

It'll be tough for any pitcher to match what he did in those two seasons. Can someone touch going 41-10 with a 1.90 ERA in two seasons again? Sure. But will there be a time where hitters are ever that superior again? I don't know but if they are, good luck getting that ERA under 2. 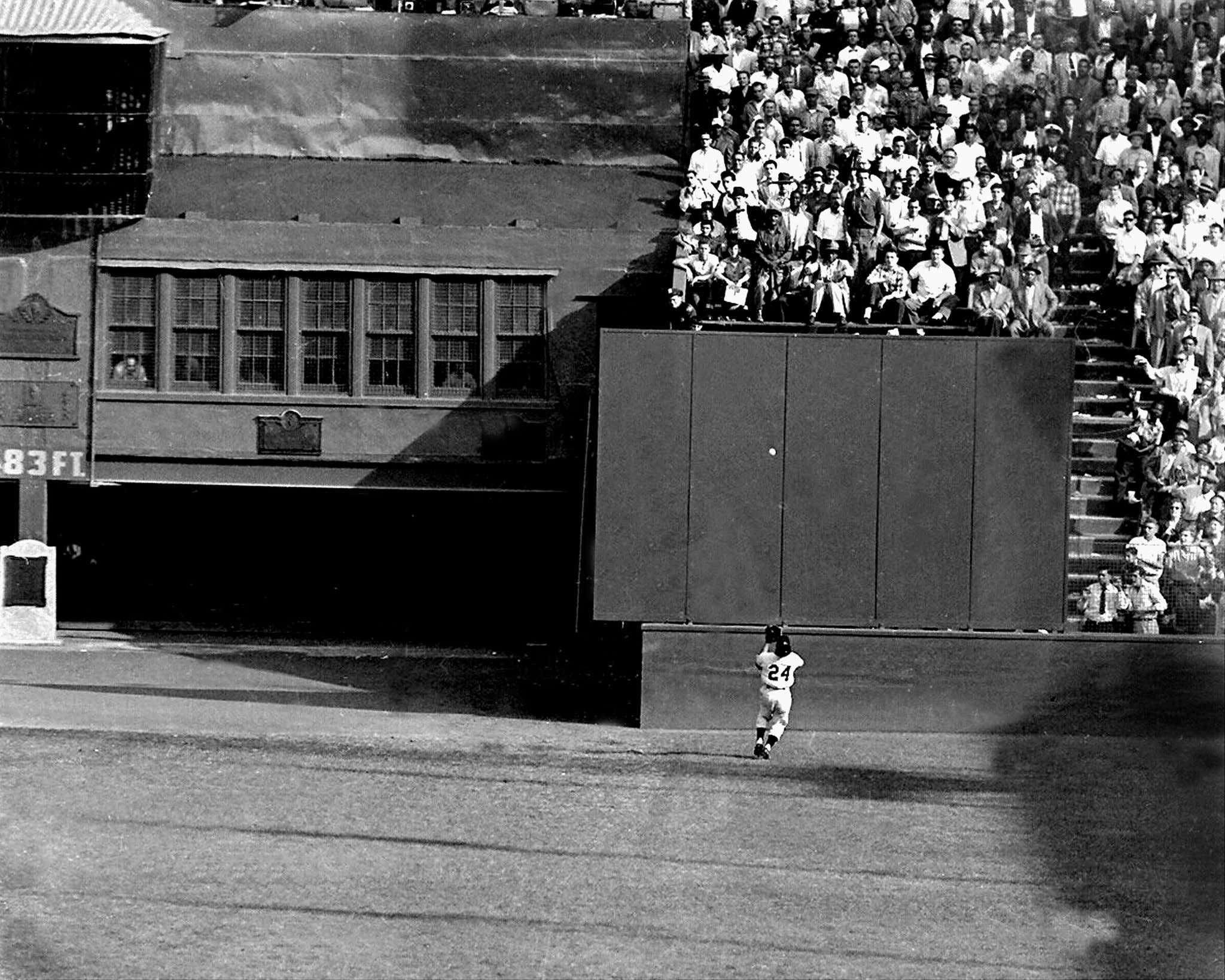 He's not just the best living player. He might be the best ever. I think it's Babe Ruth personally but he also played during segregation and a time when Walter Johnson throwing 90 MPH was a big deal. It's not a great or fair exercise to compare past players to what guys can do now but Ruth played so long ago that the game really was radically different then.

Mays is 91 years old now and started playing four years before Sandy Koufax was even in the big leagues. That picture above was from the 1954 World Series at the Polo Grounds. Not only is that stadium long gone, the entire team moved to San Francisco 66 years ago. Good luck even finding someone who even rooted for the New York Giants as a kid. The veteran center fielder from that team is still alive!

It's hard to put Mays' greatness in numbers. Trout already has more MP awards than Mays ever won. He only hit 50 or more homers twice in a season. The thing with Mays is that he was exceptional for an entire generation. He went to 24 All-Star games. He only played 23 seasons (they played the ASG twice a season for four years in the late 50's/early 60's)! He was fantastic at everything. He was one of the best center fielders ever. He had 660 home runs. He could hit for contact. He was an extraordinary base stealer. There was no part of Wille Mays' game that wasn't as good as gets.

An actress in the 1960's named Tallulah Bankhead once said "There have only been two geniuses in this world - William Shakespeare and Willie Mays." I don't know if I agree about Shakespeare but she was right about Mays.