"NO! I'M NOT DOING ANYTHING WRONG RIGHT NOW," screamed the woman following a man and his dog around New York City so she could rant & aggressively block them with her bike as they calmly tried to escape her unhinged wrath. Obviously I don't know the full scenario, but this guy could have been putting his dog & others in danger by letting it hang out and take a giant steamer in the bike lane, and her nutty reaction still would have made them look like innocent angels.

Listen, in my pre-baby-before-I-let-my-body-turn-to-gelatin days I was obsessed with riding my bike around this city. I'm one of those people who hopped on the bikewagon during NYC's covid quarantine so I could get some fresh air and I fell head over wheels (ha ha) in love with it. From my shoebox-sized Astoria, Queens apartment I started riding my bike to HQ for work, way out to the Rockaway beaches on weekends, did the entire perimeter of Manhattan with my bocce buddies, began doing group-ride meetups, and throughout it all I met amazing people, including die-hard, long-time city bikers who did not suck and who were quick to offer helpful tips & recommend cool trails.

Even when I was super pregnant I was on that sucker multiple times a day going anywhere and everywhere, ringing my stupid Big Apple Bell with glee. And oh my God I would not shut up about it. I went back to see how many times I Tweeted about my bike and it was egregious. 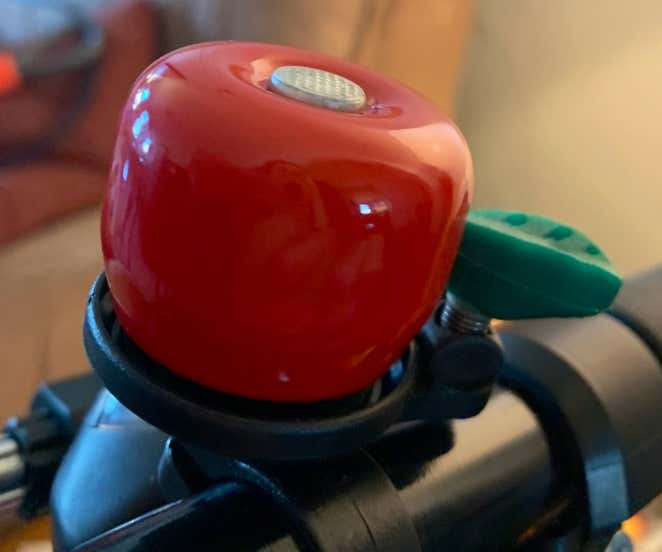 All that's to say - even though I wasn't a crusty old bike veteran and had limited experience, it didn't take long to have several close encounters with death via speeding-SUV-in-the-bike-lane, sudden-car-door-opening or pedestrian-blindly-stepping-into-my-path type situations, even when I was following all the rules to a T like the nerd I am. It was scary & frustrating and upsetting sometimes and I flipped the bird a time or two. And 99.9% of bikers are good, solid folks just trying not to die in a world built for traffic jams… but my God, the crazy biker demographic like this woman make me want to smear fly-trip glue over every inch of every bike lane in this goddamn city. By the time that video ended I wanted to hop in that Gravedigger monster truck and run over 10,000 bikes in a row, even ones with cute little big apple bells.

But who knows… This is New York City where anything goes and people are prone to a lil yelling, and perhaps her primal screams awakened something in the dog walker that will sprout something magical…

In closing, I leave you with a Portlandia character that she'd truly hit it off with, and the time I didn't notice the "don't walk" pedestrian sign and ran into the street like an asshole and almost sent a cyclist flying over his handle bars and a Stoolie happened to capture it and DM it to me because why not. Happy Friday!