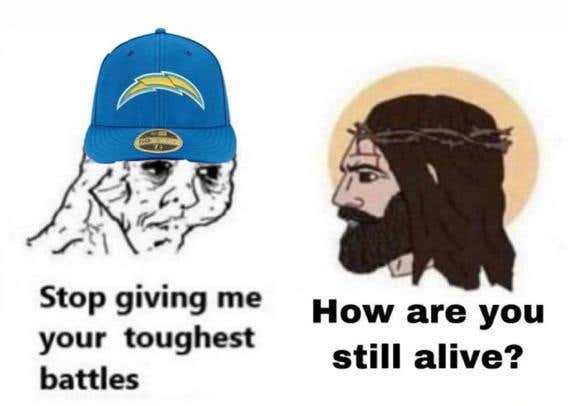 I have officially moved on from the embarrassing loss the Chargers laid on my head last weekend which means It's time to move on and look to how this rancid franchise fixes their issues in the offseason. There are 5 positions that stand out as needing major work. Some will be easier to fill through the draft, but they need depth either way. Some of these guys will also not make it to FA without getting a new contract from their current team. However, where is the fun in speculation if you have to factor that into the situation.

Note: Most of this info is from Spotrac, so yell at them if anything is wrong.

If you've watched any Charger football this year, you know there is a glaring need in the passing game: speed. This was a slow ass team at the receiver position and it the lack of separation made deep passing extremely hard. Joe Lombardi's playbook not having a pass other than 10 yard comebacks didn't help but adding speed is critical. This is one spot that will definitly be easier to fill through the draft because of who is available in the draft vs. FA and because money is a big problem here. Keenan and Williams are getting $20 mil each so they can't bust out the pocket book for a WR3.

CHEAP OPTION - Jalen Guyton: in 3 years with Justin Herbert, he is averaging 17 yards per reception and is , above all, a certified burner. He tore his ACL early last season which makes it a little riskier, but he isn't going to get more than $1 mil AAV.

UNREALISTIC OPTION - D.J. Chark: He has 4.3 speed and ranked 6th on the year in big play percentage this season. He would FEAST as a WR3 in this offense, but they Chargers don't have the cap to afford him. He's going to get close to $10 mil AAV this offseason.

MAYBE OPTION - Marquise Goodwin: He's 32, but he's coming off a year of big plays with Geno Smith. He finished the year 4th in big play % and should cost around $1.25 mil AAV.

DRAFT OPTION - Jalin Hyatt (Tennesee): This dude is FAST and will probably be available at pick 22.

Gerald Everett had a career year with the Chargers, but part of that stems from basically every other receiving option being hurt. Parham is injured a lot and both him and McKitty just aren't good blockers. They need someone who can pop a big play but also someone who can block. Luckily, there are some cheap options in free agency and also a loaded draft class.

CHEAP OPTION - Foster Moreau: He caught 33 passes for 420 yards this year and is a solid pass blocker (72 grade in PFF). Spotrac has him looking at about $750k AAV which is very affordable.

UNREALISTIC OPTION - Dalton Schutlz: He's a really good receiver, but not a particularly great blocker. The Chargers won't be able to afford his $10 mil price tag regardless.

MAYBE OPTION  - Chris Manhertz: He's not a receiver, but god damn can this guy block. He's essentially an extra offensive lineman which the Chargers could use desperately in the run game. A $3 mil+ AAV contract is just hard to rationalize for a guy who doesn't really catch the ball, though.

DRAFT OPTION - Darnell Washington (Georgia): This guy has the size at 6'7", 270lbs. He can catch but more importantly, he can block like a lineman.

Matt Feiler was a great plug-in but he is coming off his worst year as a pro. They need someone that can help make that left side unbeatable.

CHEAP OPTION - Elijah Wilkinson: He's about to turn 28 and did solid in both run and pass blocking. At around $1 mil AAV, he would be a solid replacement for Feiler.

UNREALISTIC OPTION - Isaac Seumalo: This is a large dude that knows how to move people. He was fantastic in the passing game and very solid in the run game. He's looking at a $5.5 mil price tag which may be out of reach after all is said and done with restructuring + addressing other needs.

MAYBE OPTION - Evan Brown: He is coming off a not-great season as a pass blocker but a very solid one as a run blocker. He finished the year top-15 in PFF in that category. Looks like he will get around $2 mil AAV which isn't totally out of reach.

DRAFT OPTION - I initially had Cooper Beebe here before realizing he didn't declare. I'll sub in Ekiyor since he seems within reach with the chargers pick set.

There is no other way to spin it, the Chargers were 30th in the league in pass rush win rate and 23rd in run stop win rate. They need better pressure off the edge which SHOULD come organically with a full season of Mack + Bosa.

CHEAP OPTION - Morgan Fox: Foxy had a fantastic year with the chargers and deserves to be re-signed. He wouldn't break the bank and would be a great depth guy regardless of if they go for a new body.

UNREALISTIC OPTION - Jadeveon Clowney: He's still got the juice and finished the year with solid grades in the pass and run. But there will be teams out there that will overpay for him and the Chargers wont be one of them.

MAYBE OPTION - Ogbonnia Okoronkwo: The Texans were ass but Okoronkwo was a bright spot. He had a pass rush grade of 81.9 which makes him an easy target for this team.

DRAFT OPTION - Nolan Smith (Georgia): If he is avail in the second round, he should be a no brainer. The question will be if he lasts that long. Honestly, I'll take anyone off that Georgia defense.

Drue Tranquill earned himself a new contract but he needs a running mate. Kenneth Murray hasn't lived up to his first round hype and both sides clearly need to move on.

CHEAP OPTION - Alex Anzalone: He isn't particularly incredible at anything, but he is a tackle machine.

UNREALISTIC OPTION - Lavonte David: There is zero chance this happens because another team will likely offer him his last bigger money deal, but he is just so damn good. Really solid vs the run and excellent in coverage.

MAYBE OPTION - Tremaine Edmunds: Like David, he is excellent in coverage and a better pass rusher. However, he struggles vs the run which is what they really need. He's only 25 and he looks like he will be getting a little over $3 AAV.

DRAFT OPTION - Jack Campbell (Iowa): He is a big, tall tackling machine and I'm a sucker for big fellas from Iowa. He should be available day 2.