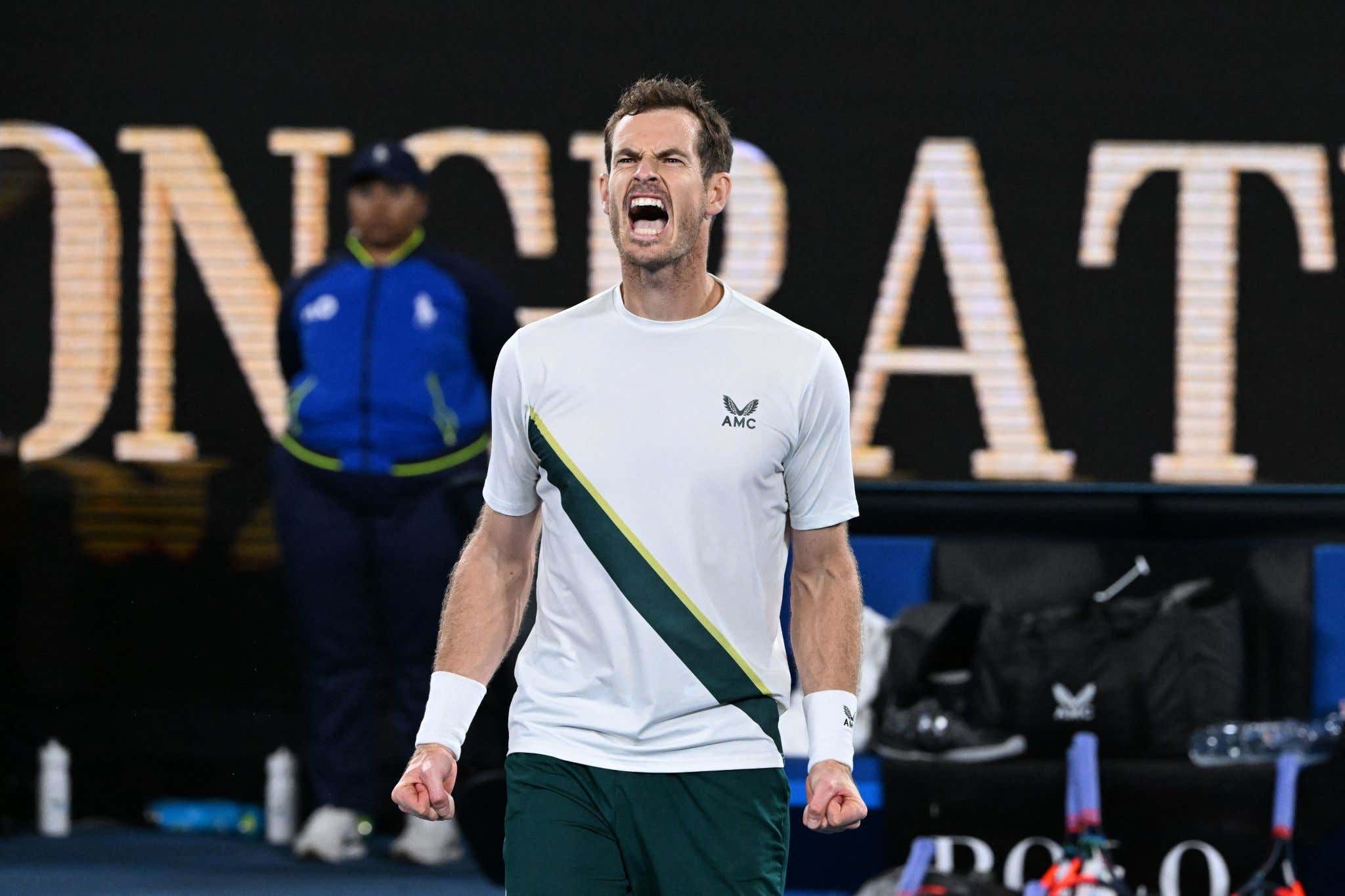 I'm not sure Andy Murray has the appreciation he deserves over here in the United States. Actually scratch that, I know he doesn't. I'd imagine you know the name Andy Murray because he became the first Brit to win the Wimbledon title since the 1930s. That was a massive deal when it happened back in 2013. From that point on he was comfortably slotted in with the Big 4 for a while there until his hip gave out.

In 2019 Murray was on the verge of retiring from the sport altogether, admitting the pain he was suffering in his hip was preventing him from doing daily tasks like putting on his own shoes and socks. When he lost at the Aussie that year they played a video montage from all of the stars showing their appreciation. He hadn't announced his retirement yet, but all the signs pointed to that being his last tourney down under. Murray had a 2nd hip surgery on the table that he said would almost be more for bettering his every day life than extending his tennis career. The odds of it being successful and causing him to return to the court full-time were pretty low.

Well, he had the surgery and basically acquired a metal hip. A few months later the pain was miraculously gone and he began to slowly play again, but the only issue was that he wasn't the same player. Over the next few years he'd basically have to re-learn how to play the sport. It was a GRIND and caused him to experience more losses than he ever imagined. Dude was playing in some lower level tournaments that would be almost embarrassing for the caliber of player he used to be. He kinda became an afterthought on the tour. Alright he'll win a few matches here and there, but the days of vintage Muzzard were over.

In the batshit crazy 2023 Aussie Open Andy Murray has now won back to back 5 set matches against Matteo Berrettini and Thanasi Kokkinakis, two players who are nearly a decade younger than the Brit. He's totaled an outrageous 10 hours and 44 minutes on court in those matches. I feel like Novak, Fed, and Rafa have won entire slams in less time. Today he played past 4am local time to secure the insane comeback versus the local in Thanasi. Andy Murray, at 35 years old and a metal hip, is back.

Will he ever get back in the top 10? Well, you can be damn sure that's his plan, but what's certain is that Murray is back to being able to hang with just about anybody. That's not good news for anyone who faces him on the court. Thanasi Kokkinakis found that out the hard way today. Down two sets to love, and 2-5 in the 3rd he didn't even think of letting up. Hours later he won the fucking match.

Remember, they were playing this guy's retirement video more than four years ago.

You don't have to like Murray, you don't even have to like tennis, but you gotta appreciate the journey that man has had back to this point. One of the true grinders in sports today. Guy is out there for the true love of the sport doing what makes him happy. He gets Bautista-Agut in the 3rd round, someone actually much closer to his age. The same guy who beat him back in 2019 when Murray thought that might be the end.

Also, these guys playing past 4am, but not being allowed to go to the bathroom is so absurd you just have to laugh. Props to Murray for not losing it on the umpire and understanding it's the tournament's fault. Doesn't mean he can't vent for a bit.

And real quick let's talk about this draw because it's madness. One of these guys is going to be a semifinalist! It's a shame Fritz ran into the buzzsaw that is Popyrin last night. Would have been a clear path for him to get deep in this tournament.

So. Many. Americans. This is the first time 20 year old Ben Shelton has been outside the United States in his life! No biggie, just in the 3rd round of the Aussie. JJ Wolf and Michael Mmoh taking out seeded players themselves. You got Americans Tommy Paul and Jenson Brooksby facing off next round as well. Just completely batshit crazy. What a tournament so far. 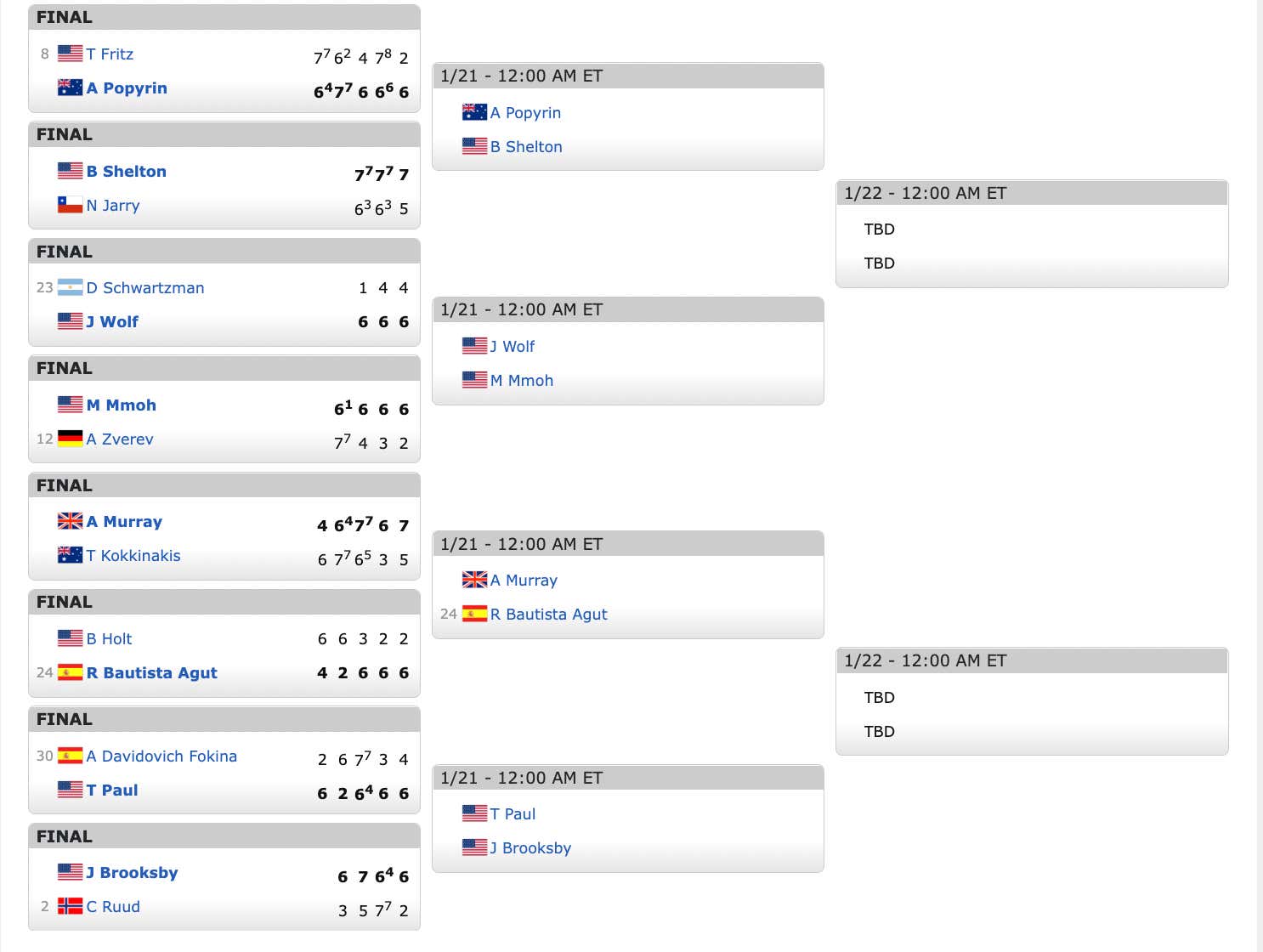 P.S. All of this sets up Djokovic to have the easiest slam victory of his life unless something bananas happens. Based on what we've seen so far, maybe that's in the script.