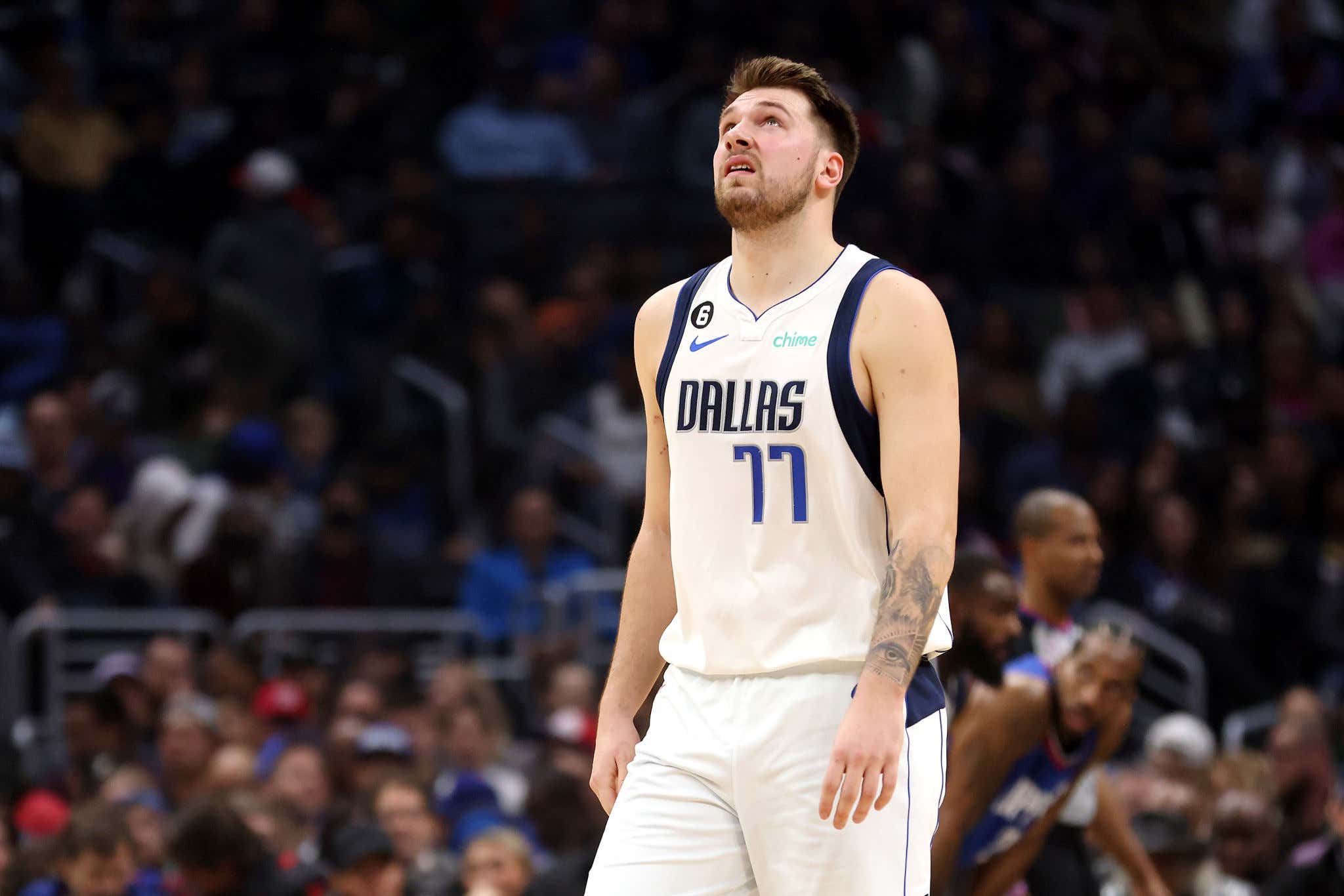 (ESPN) - Doncic has been more spectacular than ever this season, efficiently leading the league in scoring despite frequent double-teams and dragging Dallas to a 24-21 record, good enough for fifth place in the West. He's certainly not satisfied to be in the middle of the playoff pack. Doncic is a fiery competitor with a championship pedigree, having won titles with the Slovenian national team and Real Madrid, and patience isn't high on his list of virtues.

Sources said Doncic, who hasn't shown a desire to be involved in personnel matters in the past, has strongly indicated he wants the Mavs to upgrade before the Feb. 9 trade deadline.

Of course, that's easier said than done for a team that still owes the Knicks a pick to complete the Porzingis deal.

The Mavs are well aware of a modern NBA math problem: Unhappy stars who have only two guaranteed years remaining on their contracts have leverage if they're looking to leave. For reference, see Anthony Davis and the New Orleans Pelicans or James Harden and the Houston Rockets.

That doesn't necessarily mean Doncic will request a trade if the Mavs haven't put a contender-quality supporting cast in place by the summer of 2024. But the Mavs, like the Hawks with Young, surely don't want to fiddle around and find out.

A quick check of the calendar and yup, the timing makes sense. As we inch closer and closer to the trade deadline (February 9th), be prepared for a whole lot of anonymous sources reporting that a star player wants his team to improve at the deadline. Most of what you hear this time of year is smoke as teams and agents try and leverage value through the media. It's a fun dance we all do every year even though 99.9% of what we hear about leading up to the deadline never actually happens at the actual deadline.

With how close things are in the West, it is still a little early to know who the buyers and sellers are, but one thing we do know is that if the Mavs want to contend, they can't sit on their hands and do nothing. They are in win now mode, and if you are to believe those "sources" it sounds like Luka Doncic realizes that. In today's NBA with a superstar like Luka, it's probably in the Mavs best interest to make sure they are doing everything they possibly can to keep him happy. To do that, the easiest thing would be to bring him some help whether Mark Cuban wants to accept that or not

But how easy is that going to be? What players or types of players would you say could even make a difference? It's no secret Luka's usage is ridiculous, at 38.2% it's the highest of Luka's career. Given that he's having the most efficient season of his career I wouldn't say there are signs he's being worn out, but if the Mavs are going to make a deep run, it's not crazy to suggest they find ways to lighten the load.

At the moment, this is what the Mavs have to work with 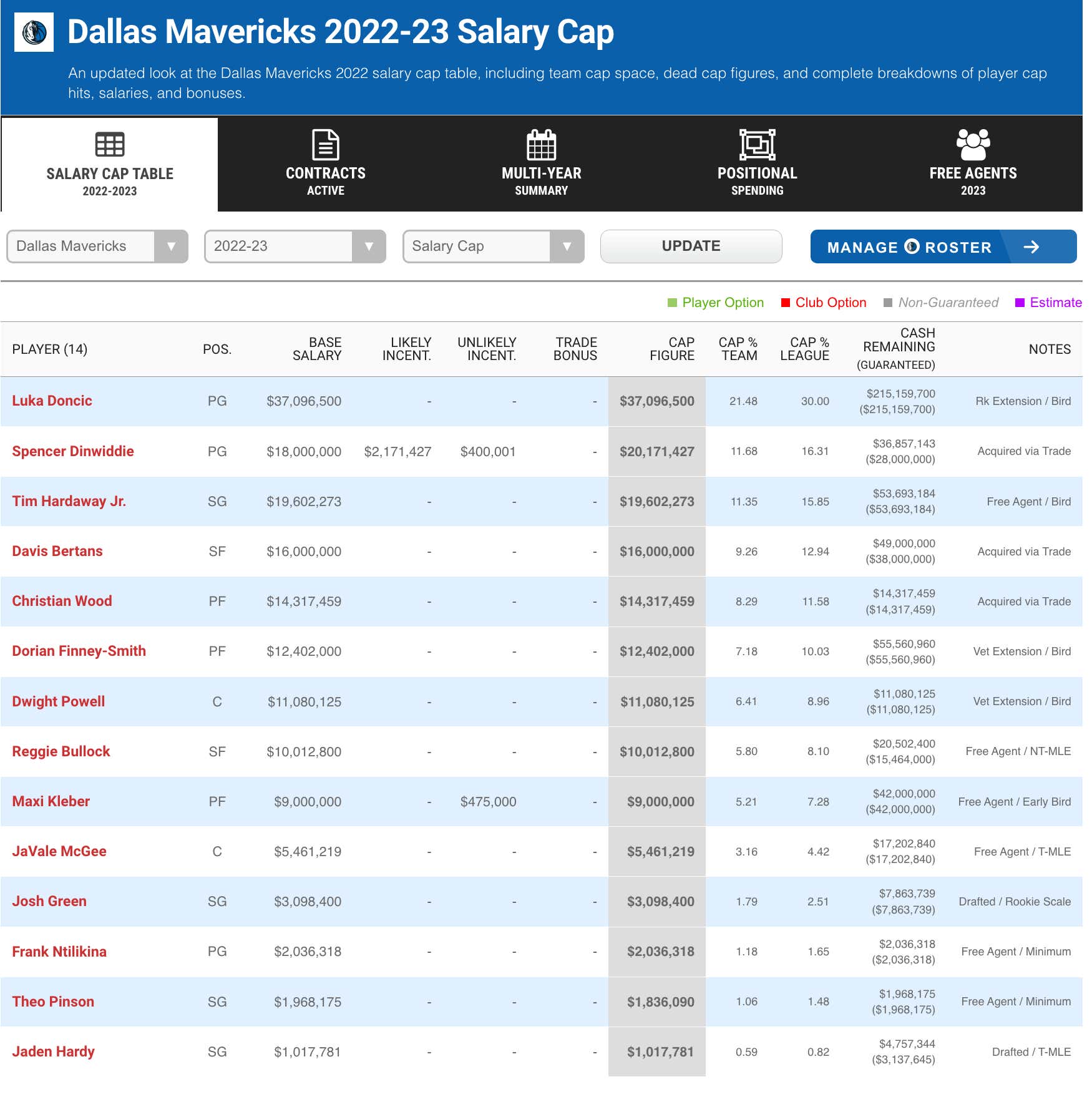 It's also important to note that Christian Wood is an UFA this summer. He's also arguably the 2nd best player on the Mavs, so unless there's going to be an extension in the near future, could he be a possible trade piece? Someone like Davis Bertans still has another $17M guaranteed next year and a $16M player option the year after, so how many teams are going to sign up for that? We're seeing some rumors around THJ, but he has another year at $17M next year and $16M  in 2024-25 and is on the other side of 30.

So you can see, it's easy to say "GET LUKA SOME HELP", but what is that help that would make a drastic difference? Maybe you think they need another type of shot creator or secondary ball handler to help support Luka. Who is the guy that makes 12-19M that would make this team better? There are guys like Collin Sexton and Malik Beasley who fit that description, but why would the Jazz want to bring on long term money. Maybe the Clippers would listen on someone like Luke Kennard ($14M), but the Clippers need point guard help not wing help so how would that work? Perhaps the Magic would be open to swapping Reggie Bullock for someone like Terrance Ross since their money lines up and only $5M of Bullock's salary next year is guaranteed while Ross is an UFA. Maybe you throw them a 2nd so they don't lose the asset for nothing.

But is someone like Terrance Ross going to be a difference maker? Probably not (no disrespect), so you can see what a pickle the Mavs are in right now. I imagine they'd kick the tires on names like Buddy Hield (21M), Bogdan Bogdanovic (18M), Gary Trent Jr (17.5M), Jordan Clarkson (13M), but don't forget, they also owe their 2023 1st round pick to the Knicks (but this has protections and will probably end up being a 2nd). It feels like this is a roster that has some good pieces in a vacuum, but not exactly guys that would bring in a return of players who are better than what they currently have and it's not like they have a ton of draft capital to work with either.

Hindsight is of course 20/20, but perhaps the Mavs should have just paid Jalen Brunson? He seems to be pretty good and sort of exactly what this roster is currently missing. Now I'm not sure what the Mavs do, especially when the rest of the league knows they need to do something if Luka is starting to get antsy. That kills any sort of leverage once you get into negotiations.

What we do know is the clock is ticking for this front office. These next few weeks might go a long way in shaping the next few years of their franchise, even with Luka only being in Year 1 of his 5 year extension. Things change quickly in the NBA, especially when a star player doesn't think the roster is good enough to win and contend, which if you believe those "sources", it sounds like Luka is getting closer and closer to thinking.