There's lots of lingo in the game of poker and one of those terms is "nuts". Nuts is the best possible hand that can never lose. More than anything you want the nuts, but uh… nut so much in this particular case. Have I mentioned nuts yet? Nuts.

Behold the saga of pro poker player Melissa Schubert, a wild joker named Coke Can Greg who, indeed, dealt her the nuts, and Schubert's "employer" who decided to take Greg's bottom pair & hold 'em in a squeeze.

Now that's an ANGLE. Coke Can Greg didn't just send a traditional surprise dick pic, he sent the whole kit and caboodle. Not here to body shame, but you've got to give a little warning if you're gonna drop a swollen man-tiddy, cavernous belly button, tangled field of inner-leg hair & the entire frumunduh-bundle, and shot from below no less. 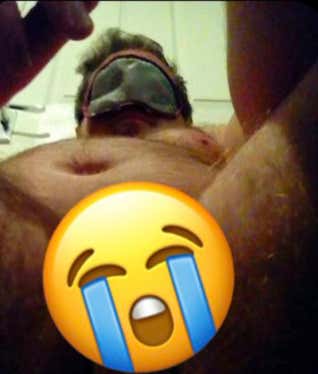 If I received a DM like this (especially OUT OF THE BLUE FROM A TOTAL STRANGER NAMED COKE CAN GREG) there's zero chance I'd be able to keep it to myself. I'd be running from desk to desk at work like a demented Johnny Appleseed making sure I planted this image in everyone's mind since it was already stuck in mine. "You guys GOTTA SEE THIS!"

Thankfully Schubert also knew the world needed to see this & she took to her own Instagram story with this caption:

"Greg, bestie, I'm going to have to charge you a service fee for sending me this atrocity". 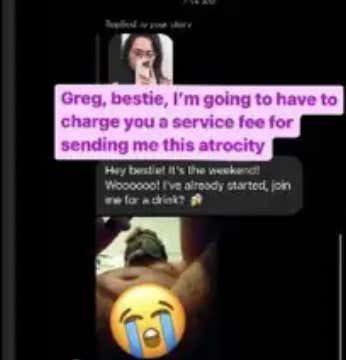 This is where the wheels really start to fall off for ol' Greg. When he sees that his unsolicited dick pic is now public and his genitals were referred to as an atrocity he flips out.

When she does not delete the harassment he sent, he flips to become the victim since he is now the one receiving abuse. He highlights his own politeness (leaving out the part where he dropped his messy cock n balls into her world) and says he hopes she does the right thing. 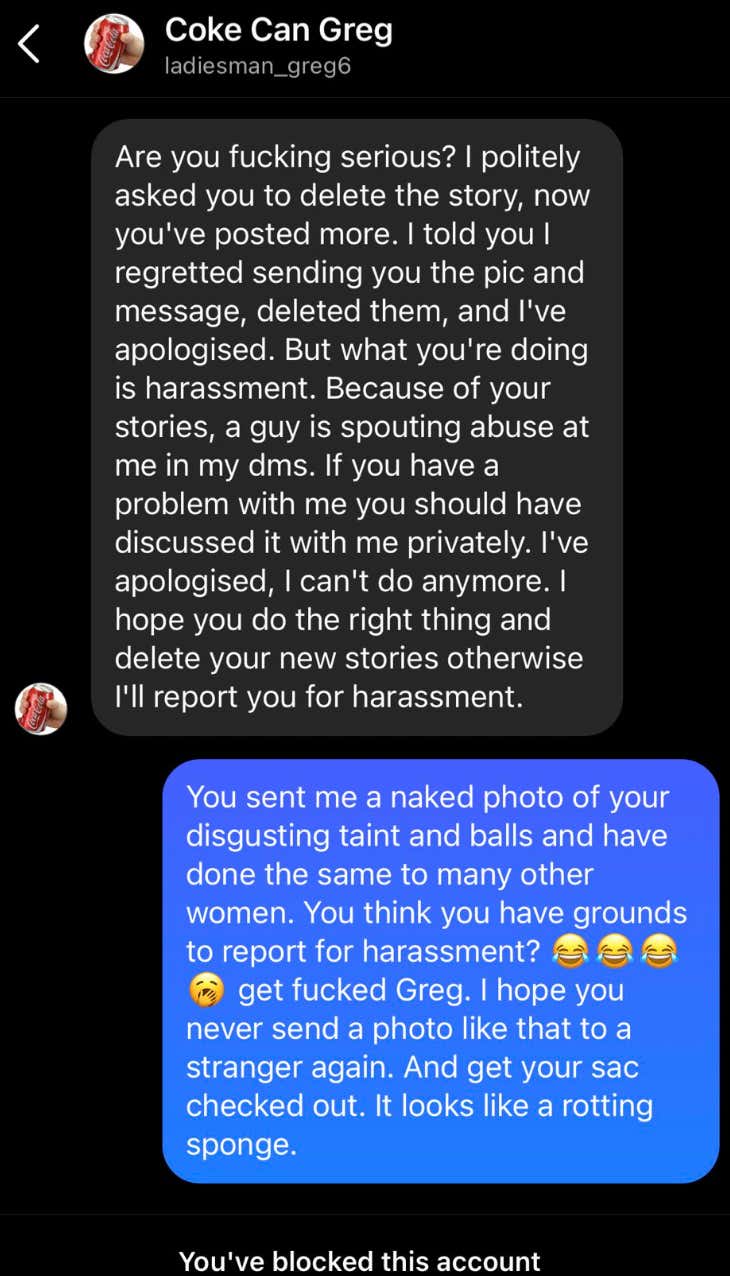 When his long-winded pleas resolve nothing and her Instagram stories remain, Greg takes things a step further and reaches out to another poker pro, Danielle Andersen, who he believes is Schubert's boss at her casino job. (Andersen has never met Schubert and I don't think either of them work at a casino.) Andersen gleefully relays her own convo with Greg back to Schubert, who continues to share.

If you have the time, I cannot recommend you reading the entire exchange enough: 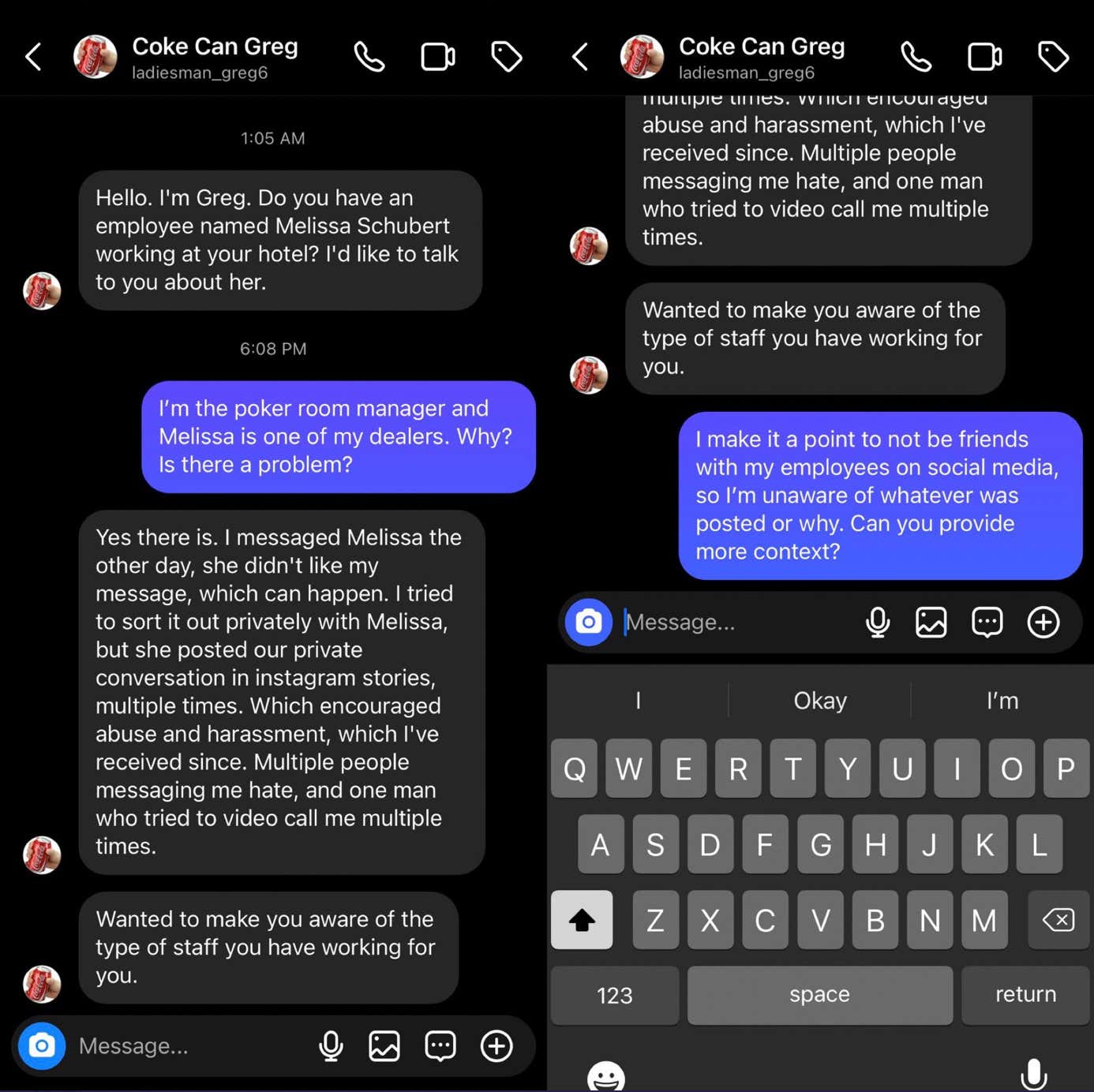 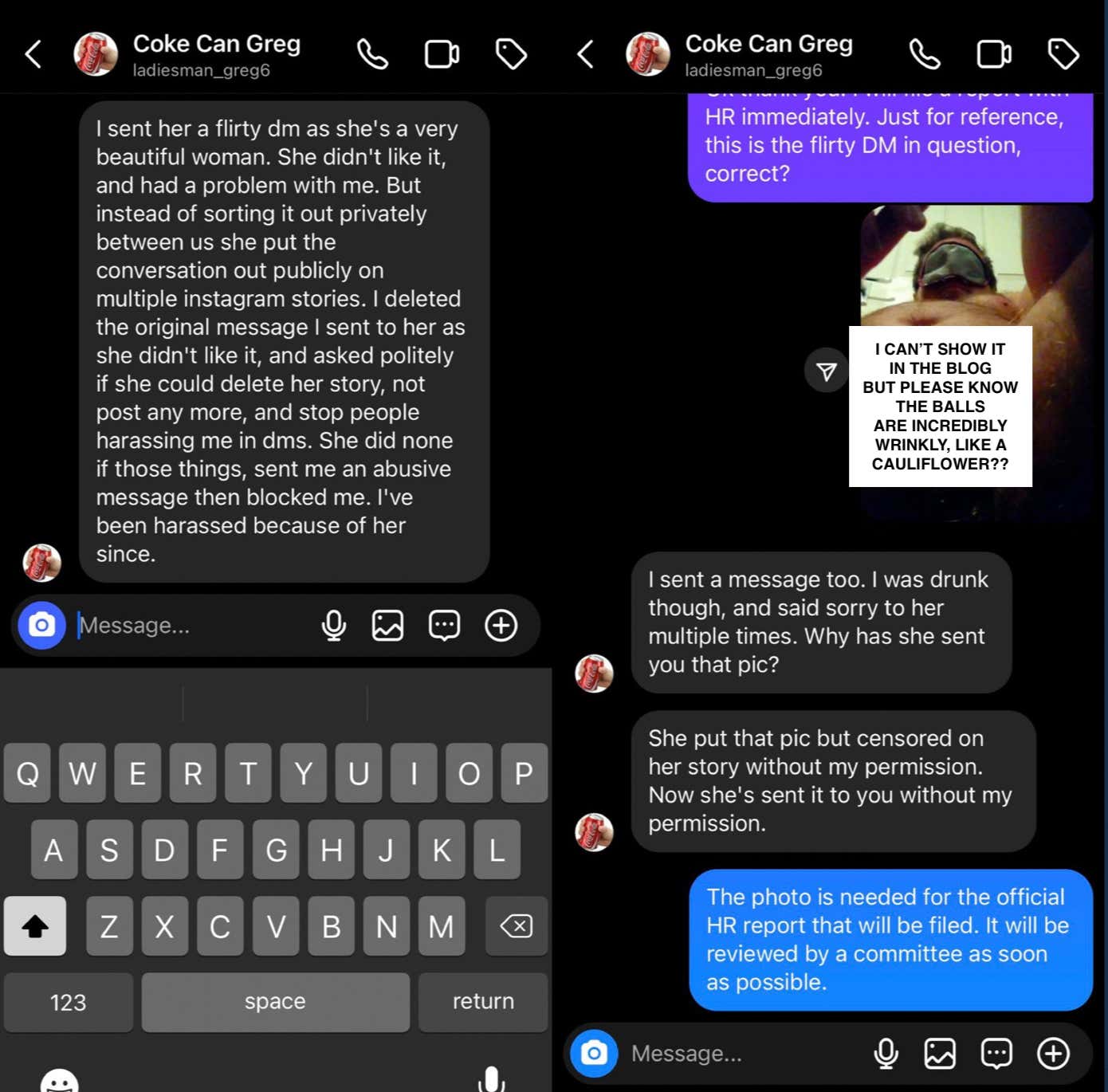 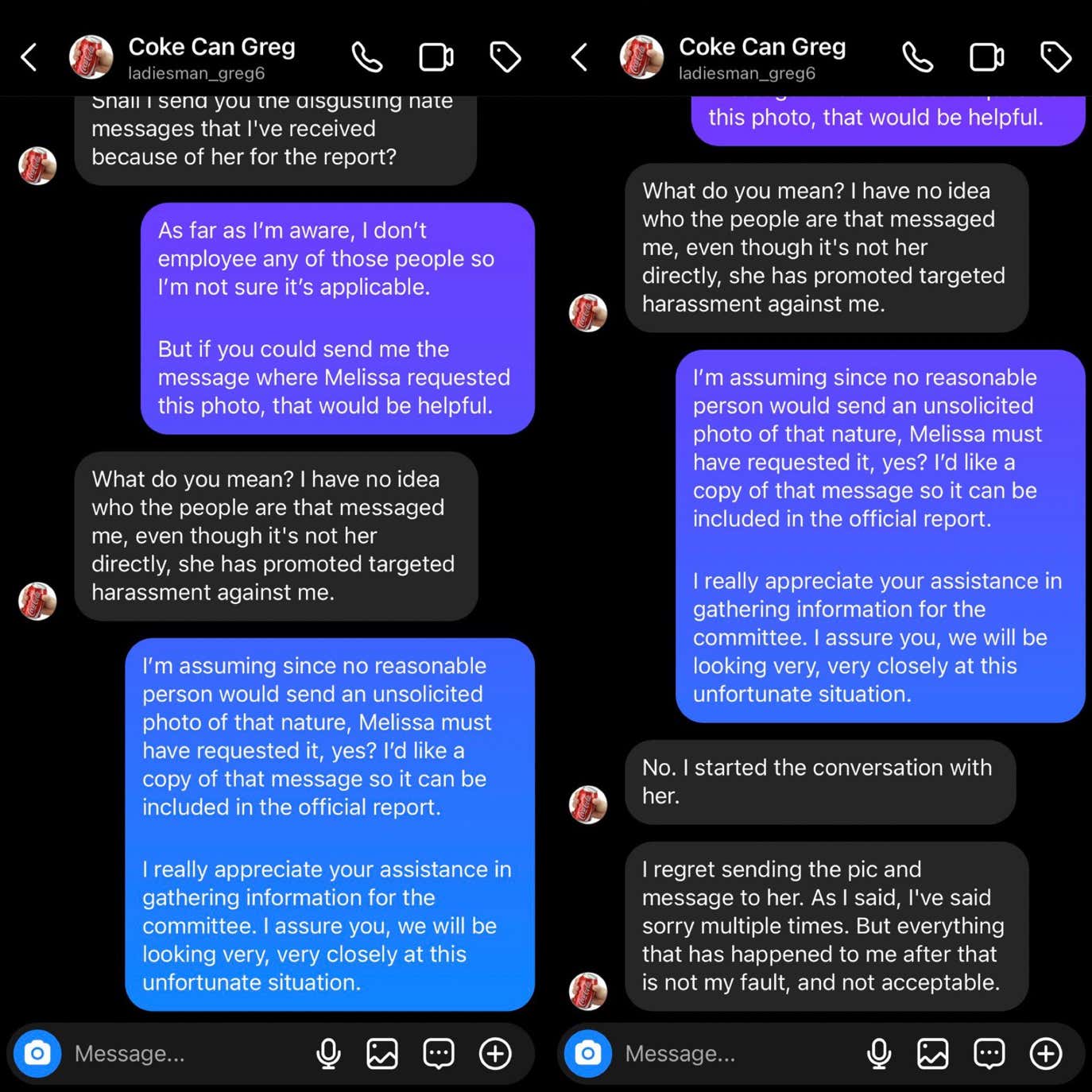 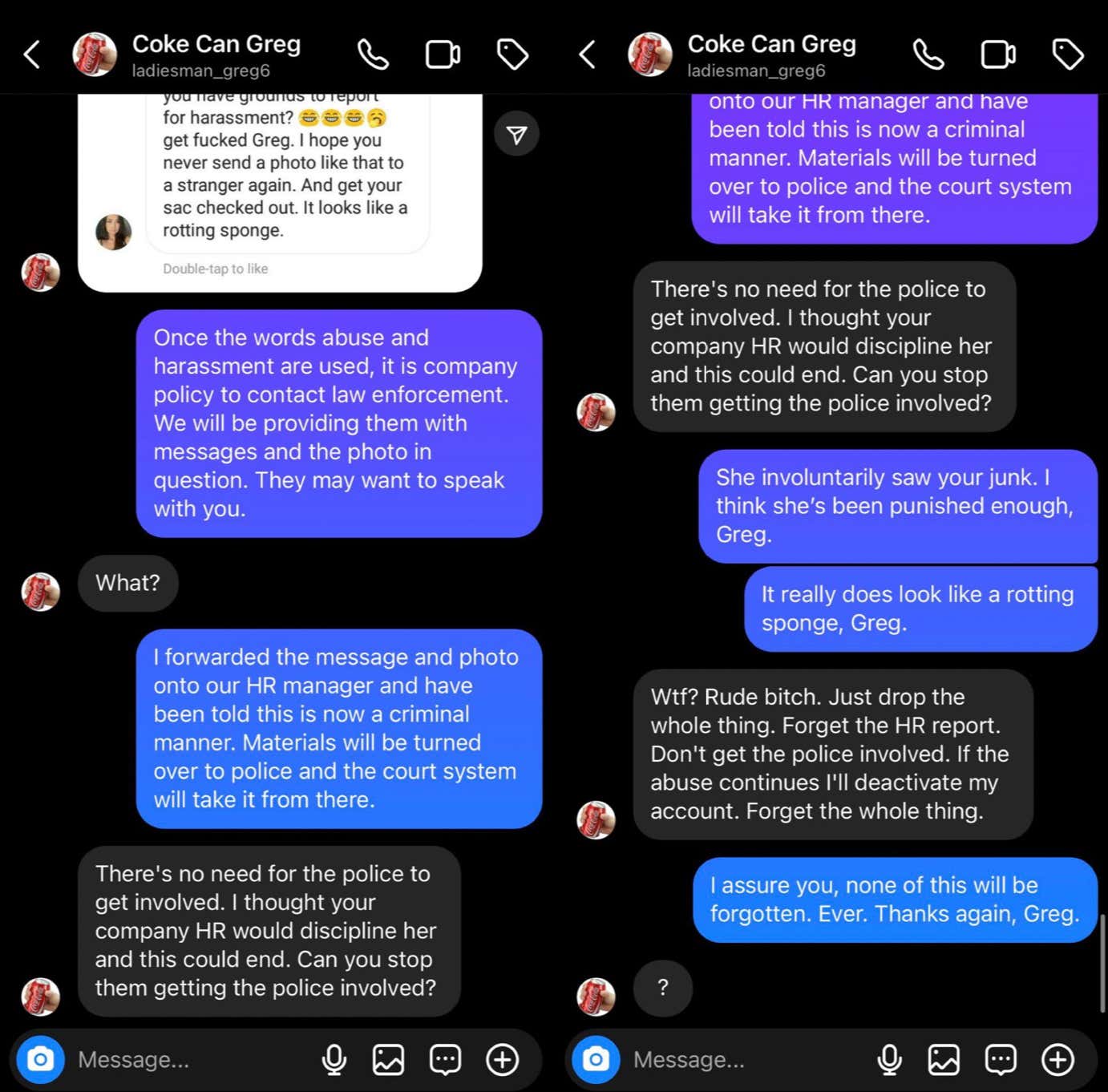 The parts where Andersen convinced Coke Can Greg that an entire HR team would form a committee to examine his atrocity balls and that police would soon be involved was an absolute delight.

In the end, Schubert & Andersen became fast friends and Greg got royally flushed. He folded and made his Instagram account private (though he does have a secondary where he claims to be '9 inches long, 6.5 inches girth circumference', though we all know that's not true now).

As for me, I haven't received an unsolicited dick pic in YEARS but I have a sneaking suspicion mine was from Juwan Howard?! 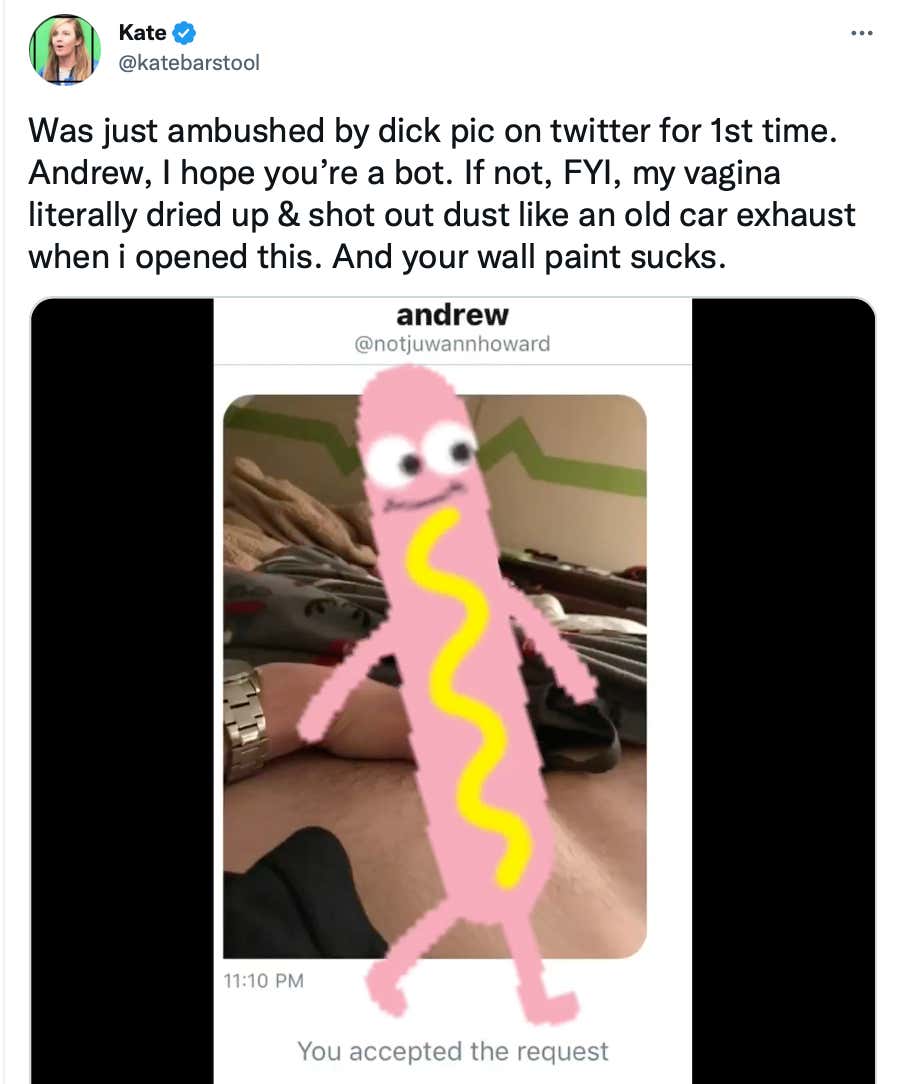 Whatever the case, let this be a lesson to anyone considering surprising someone with your genitals. You might think you have the nuts, but I promise you don't.