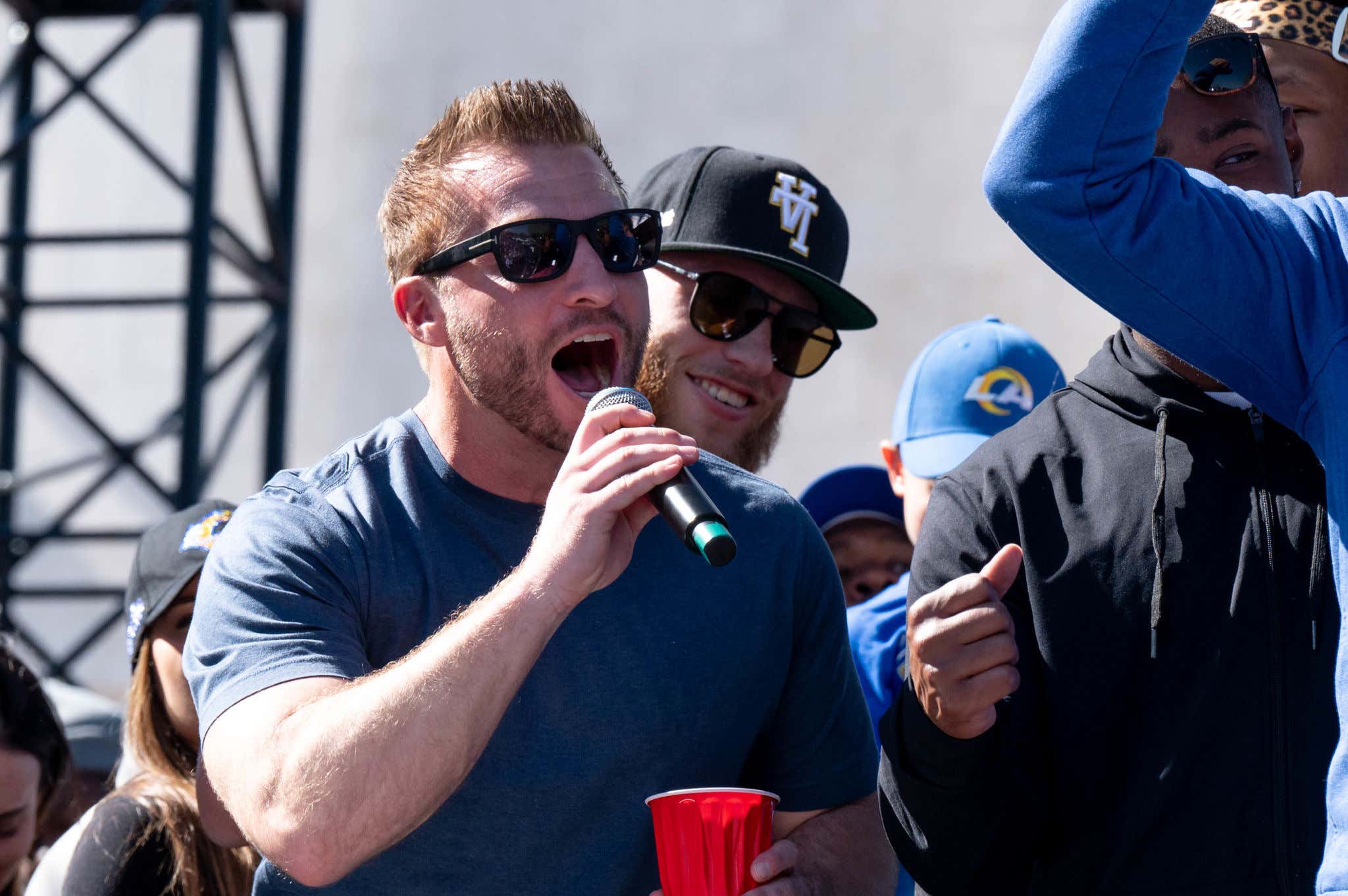 Yeah, I went digging for a Tony Hawk-famous skateboarding reference to describe how dizzy I am trying to recover from this news about Sean McVay digging his heels in to remain the head coach of the Los Angeles Rams.

Blessings to the classic image of McVay clutching a Solo cup as the Lombardi Trophy lingers somewhere close by. One of the boys. Hell yeah. And that scenery so invokes The Wolf of Wall Street for obvious reasons.

WTF!? He tells his assistants that it's OK to seek out other work. Doesn't shy away whatsoever from his past publicly stated interest in a TV job. Endures easily the worst season of his young coaching career. All the scuttlebutt and speculation points to the 36-year-old NFL coaching wunderkind telling the old-head football lifers to shove it, and that he's going to, you know, have an actual life outside of coaching.

It evidently didn't take long for McVay's competitive instincts to prevail. And oh wait…maybe this is why McVay told his assistants to look into new prospective gigs:

Maybe he only would've walked away for a year or a few at most before becoming the hottest-ever coaching candidate to hit the open market. If the Rams suddenly had a coaching vacancy, that would either wreck their current course or attract another massive name like, say, Sean Payton.

Instead, McVay is back for more. He ain't going out on no 5-12 season. Fuck that. I admire him for sticking to the grind. As Clem covered recently, there was a sense that McVay wanted zero part of a rebuild in LA:

He obviously went through a lot of shit on and off the field. Part of me is uncertain whether he took enough time to clear his head in a legit way and really weigh his options. Then again, there were a lot of meaningless games for his team down the stretch, and this whole early retirement scenario has been heavy on McVay's mind.

My main hope is that this doesn't turn into a "will he or won't he?" annual waffling fest a la Brett Favre and Aaron Rodgers. The report from months back about McVay retiring once the quartet of Aaron Donald, Cooper Kupp, Matthew Stafford and Jalen Ramsey broke up made more sense than leaving multiple potential years on the table with that group. Not to mention, I remember McVay getting emotional late in the season when he spoke about splashy free-agent signee Bobby Wagner's impact and leadership through a tumultuous 2022 campaign. Wagner was named to his ninth straight All-Pro team on Friday.

Donald, Kupp and Stafford all dealt with injuries — the latter two of the major variety — among countless other Rams who went down throughout the year. Brutal luck coming off an all-in push to win the Super Bowl. McVay must've looked at his top-heavy roster, realized how good they can still be when everyone's healthy, and not to mention, LA has this offseason to bolster the offensive line and other problem spots to bounce back in 2023.

The silver lining to this entire Rams debacle is that their star-laden core now has a pseudo-underdog narrative to rally around. Like, "Maybe they're all over the hill." Stafford in particular is concerning since he suffered multiple concussions and a neck injury. Good news is, McVay might've found at least a passable bridge option in Baker Mayfield, who has boulders atop both of his shoulder pads.

I'm not yet in the business of doubting Sean McVay. Not only because we share an alma mater — LOOOOOVE AND HONOR TO MIAMI!!! — but because all this man does is win. He has perhaps the sharpest mind and the uncanniest, most specific football-related recall of any coach to ever live. Plenty of talent to work with and an offseason for GM Les Snead to perhaps be a little more chill about sensible personnel acquisitions. Or the Rams will just quadruple down and shock us all with more sick moves.