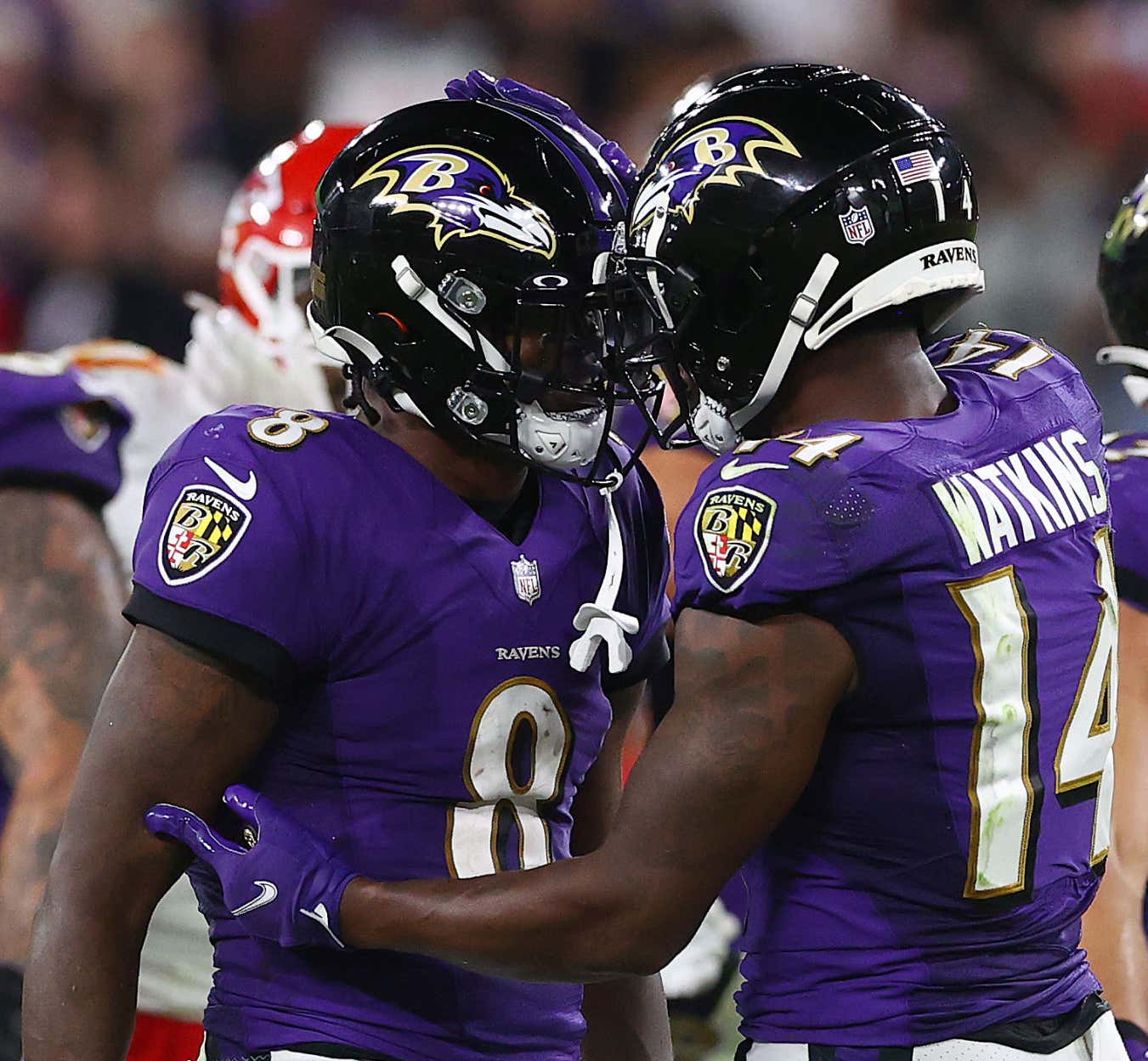 Good golly me. What a carpet bombing of quotes in that article. I'll extract the excerpts and we can go from there because I, like Sammy Watkins, have quite a bit to say about the situation at hand.

Washington Post via Adam Kilgore -- “In this league, everybody is pretty much banged up, hurt,” veteran wideout Sammy Watkins said Wednesday in a quiet corner of Baltimore’s locker room. “I don’t want to speak for him and his situation and whatever he’s going through with the contracts. I don’t know what world he’s in. But for me, you got a chance to do something special. We all know with Lamar Jackson out there, this team is really freaking good, and special things can happen. He can will this team to a Super Bowl. I don’t think he’s thinking about it that way. …

“But he’s got an opportunity to win a Super Bowl. I hope he hobbles back out there. … Put him out for the pass plays, and don’t run him at all. But you never know. That could be wrong. I’m being very selfish right now, just to want him to be out on the field. But, man, what a great thing it would be to see [No.] 8 touch the field this Sunday, and we go out there and blow them out. But that’s for Lamar and everybody else to figure out. Hope miraculously something happens, somebody reach out to him, whether it’s a coach or somebody, and he decides to play. But that’s a question if he’s healthy or he’s not. I don’t know. I haven’t been watching him.”

“I think the world is ready to see Lamar back on the field, doing what he do best, and get all the stipulations and contract stuff behind him,” Watkins said. “I pray somebody talks to him like, ‘Man, just sign the deal.’ You know what I mean? And he get out there and hopefully, if … he’s healthy, he can just come play this Sunday. We all know that’s up to Lamar and whatever goes on. Hopefully, they get something done. The world wants to see Lamar be a Baltimore Raven for the rest of his life.”

“I’m blessed to play with him,” Watkins said Wednesday. “But the world wants to watch Lamar Jackson. That’s a phenom talent, a talent that you rarely come by. Things that he do on the field and things that you see, to be quite honest when he’s out there, he makes everybody play better, just to have him in that huddle. I pray (Watkins clasped his hands) that somebody reach out to him or that he’s really truly getting healthy and can play, that he wake up Thursday and be like, ‘All right, forget it. I’m playing.’ I think that would change the whole trajectory of our season.”

I mean…. what a monologue this is. Especially from a guy who wasn't even on the team until 24 days ago. Granted, he was with the Ravens last year and has a rapport with Lamar from then, but still. This is from the clouds and completely out of character from what is typically a tight-lipped locker room. But it's also telling, which I'll get to.

It's more or less a plea for Lamar to come save the day. Which is totally the scenario at hand. This team cannot go on a run without #8. That's factual and this team knows it. But it's also dripping with skepticism that the injury is one that is truly keeping Lamar off the field. It may acknowledge the degree of mystery surrounding his health… but everything else in the series of quotes suggests he's making a business decision.

Now… it's important to note that despite these quotes being published on this Purple Friday morning that Sammy said these things on Wednesday, which was BEFORE Lamar himself broke his silence and described the nature of his injury on Thursday.

Yet…. the fact that Sammy's sentiment even existed at all is a problem in itself. And I do believe it's a sentiment shared by at least some in that room. Last week I had heard at least one veteran was "fed up" and that "apparently he [Lamar] just doesn't want to play". Whether that's actually fact or just an impression guys have, that's a HUGE problem for a guy that wants to be paid big money to lead a locker room for years to come.

If you read my blog yesterday about Lamar's tweets, it's dripping with frustration that he let speculation run wild for weeks. Surely one could read that and wonder why I had little to say about the team, coaching staff, etc.'s role in shutting down the speculation. That's because I believe the team has been largely left in the dark. There were rumors swirling a few weeks ago that Lamar had not been into the team facility to get treatment and rehab the injury. Most of that was fueled by the Baltimore Sun's Mike Preston, who casually slipped in a Q&A column on December 14th the following quote:

"It’s no secret to any of the coaches or top members of the front office that Jackson is a slacker and needs to have more due diligence in getting adequate rest, eating a healthy diet, being alert in meetings and workouts, and getting proper rehabilitation instructions."

Now, it should be acknowledged that Mike Preston is the requisite clown in the media here in Baltimore. He's basically Skip Bayless without a mic or a camera. Nobody takes him seriously. So while the quote did raise a few eyebrows with some, it was largely ignored and written off. And to put that quote further to rest, Preston flip flopped two weeks later like a $4 sandal from Sunsations:

"Ravens star quarterback Lamar Jackson has regularly attended prescribed rehabilitation and treatment procedures for his injured knee and is on target to return within the four- to six-week recovery window as far as team trainers and physicians are concerned, according to a league source.

The source wouldn’t make a prediction about when Jackson would step back on the playing field but said the quarterback has been perfect in his attendance and compliant with all rehab practices as he recovers from a knee sprain he suffered in the first quarter against the Denver Broncos on Dec. 4."

But guess what? Fucking pains me to say it but the dude had it right the first time. And in classic town jester fashion, he took the bait from whatever "league source" reached out and "set the record straight" two weeks later.

I strongly believe Lamar was not going to the facility for regular treatment and rehab in the first few weeks after the injury and I've been told secondhand that that is true. Ok, "secondhand"… so what? Why should you or I believe that, Banks?

Because I know for a fact that he didn't come in regularly for treatment and rehab last year (while Watkins was also on the team, mind you) either, among other behaviors and incidents in recent years that are generally unprofessional. THAT'S from a firm, trusted, more direct source (no longer with the organization) that has never wronged me before. Marcus Peters trade, Marshal Yanda retirement, annual schedule releases… all stuff I put out into the universe first relying primarily on this source, sometimes after cross-checking with others.

Among many who cover the team, these transgressions aren't exactly a well kept secret. If there's a Ravens reporter or blogger you follow and trust, there's a good chance they have heard and know about these things to some degree. Most are just beholden to a higher level of journalism and have team access that they simply cannot put at risk by talking about things they can't thoroughly substantiate. I'm not in that boat.

So why have I kept my mouth shut? Because I love this team and there's been zero benefit to me singing. 2019 was the funnest year of football I've ever watched (or at least until… you know). We all fell in love with Lamar, myself included. Not just as a football player, but as a personality. He didn't just play football and play it well… he had a BLAST doing it. And so did I. It was infectious. I championed this guy all over the internet. It was so damn fun and I wanted that to continue forever. I still do and have been holding out hope and a small part of me still thinks that can happen again. Me spilling the beans would have endangered that.

But the past two years have been so damn exhausting and I'm sick and tired of holding up this façade that the relationship between the team and Lamar is rosy. It's not. Their relationship may not be contentious, but there's absolutely a disconnect and a distrust. The disconnect has been clear every time John Harbaugh has stepped up to the podium the past month and been clueless as to how to even speak on the situation. Hint: that's because he has been clueless! And the distrust is evident in the fact that the front office hasn't given him the contract that I think most would agree that he has rightfully earned.

It's been this way for a while, and the fan base deserves to know the truth. The organization has done an INCREDIBLE… I mean INCREDIBLE job holding water for him, which is more than understandable. It's been in their best interests to do so, whether that's to protect him as the Ravens long-term QB or protecting him as a potential trade asset. We're approaching a real crossroads here, and I have no idea what's going to happen. And I'm not sure they do either.

Lamar has always held the nuts. Still does, clearly. We've got teammates begging for him to get out on the football field. It's totally possible that his knee is truly fucked and there's no way he could play on Sunday. And it's totally possible it's not and he's choosing to protect his knee and his payday. That's his prerogative and I can respect that, even if I don't like it.

But I do feel comfortable saying that everything would be better off if he had come to the facility for treatment and rehab the past two years. Or at least sooner in the comeback process. Whether or not sooner treatment would have changed his status and gotten him out on the field for these massively important games, we'll never know. But the appearance of him not having done his part to get back onto the field is a problem in itself, and THAT'S my takeaway from what Sammy Watkins has to say.