Before we go any further, I know what you're thinking. "You're THE Tommy Smokes. An A-list celebrity and one of the most eligible bachelors in Manhattan. I assume you get VIP treatment anywhere you go." But believe or not, that's not always the case. Sometimes I'm just like you. I wait in lines. I can't get in places. I even have to pay for drinks. Hard to believe, I know. But it's the truth.

And a few weeks ago, I had one of these harsh experiences. It was the Thursday before Christmas and my friend and I tried to go to this bar in New York City that I've heard good things about. But I was told getting there early is key since we were just two average straight white guys with no table and no girls. So we rolled up at 9:55 sharp. We were told it doesn't open until 10 and to come back in a bit. So we walked around the block a few times then came back at 10:04. Fashionably late. Still too early though, they said. Since it looked like there were zero people inside, that felt fair. So we headed to a different bar for a drink and came back about a half hour later. This is when I met Fabrizio. He's the main bouncer/potentially owner or something of the bar. He's well known around the NYC club community and I've seen him on TikTok before. He's quite an eccentric character and I'd like him to be my new best friend. But he was having none of me that night. Scoffed at the idea of two guys with no girls getting in. He asked why he should let us in. I said "Well I just want to go in and have a couple espresso martinis. I won't cause any trouble. I'm a nice enough fellow." Didn't work. He said "Maybe if you come back with 2 supermodels in 15 minutes then you can get in." A tough task but I told him, "Alright we will be back."

We headed to a few other bars on the hunt for supermodels. If you can believe it, we couldn't find any. So we went back with a new plan. I told him the supermodels were already inside and they said to meet us in there. He started to chuckle and I could tell I was breaking him. Not enough where he'd let me in, but a crack nonetheless. He said they must be hiding in my pocket and I said, "No they're tall 6'2" Swedish supermodels, they can't fit in my pocket! Don't be ridiculous Fabrizio!" At this point, all the bouncers were warming up to me. Sure, they've denied plenty of guys from clubs before. But they have had the Smokes Experience before.

And while they still didn't want to let me in, they at least liked me. Which is really all you can ask for. At that point, I started to give up. There was a group of pretty girls with a couple guys and they too were denied. If they couldn't get in, then two guys alone had no chance. But then this guy with an ear piece came out and said "Yo Tommy Smokes!" I thought this was my lifeline. A Stoolie was the manager of the place. Surely, he would start a Viva chant and then let me in, right? Right??? Nope. He apologized and said while he'd love to let me in, it's a one man operation. That one man was Fabrizio, and he stood firm on his stance to deny me. So I told him that I'll be back one day and that he will eventually let me in. "It might not be tomorrow. It might not be next week. It might not be next month. But one day you will let me in here." He laughed and said he respected the dedication. So while we headed out not being able to get in, I was at least able to make him laugh which felt like a win. I DMed him later that night and commended him on a great battle. 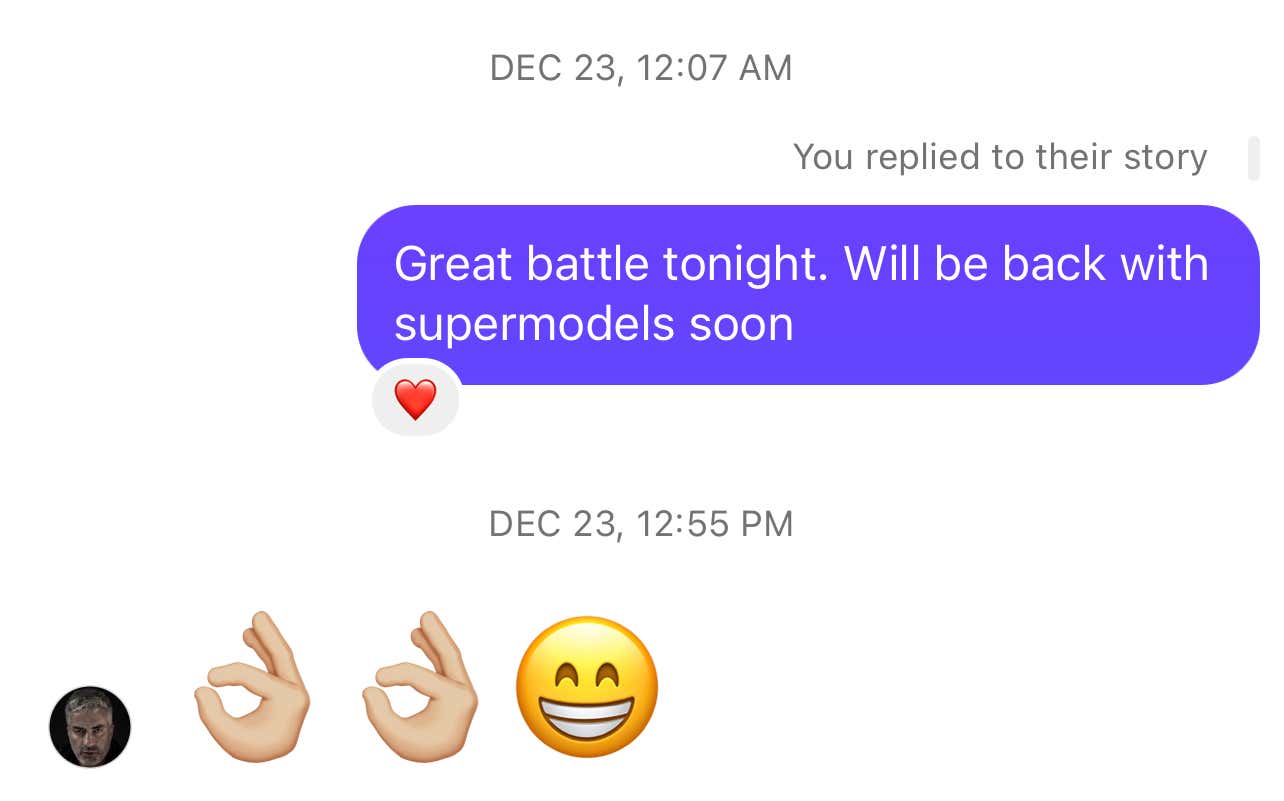 It felt like two players jersey swapping after a close game.

To be honest, part of me wants to never be let into this bar. I like to live my life as if it's a TV show. And an eccentric Italian bouncer who never lets me into his club despite my damndest efforts is a pretty great character to have in my universe. He did respond to this video on TikTok and posted it on his story. So I thought maybe my chances had increased. But this is not the response I was looking for. 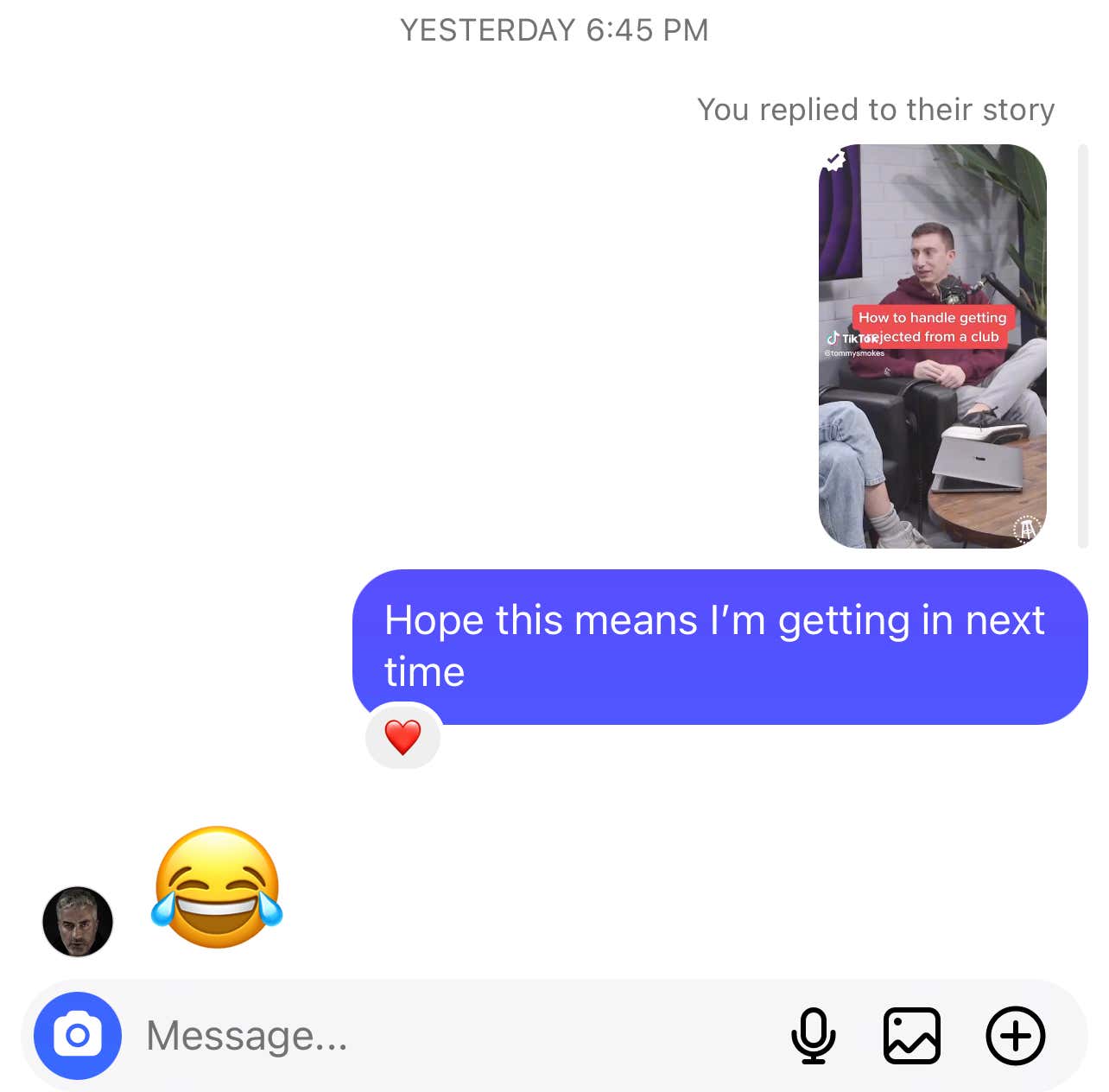 Anyway, this clip was part of the new Please End This podcast with Caroline, Rudy, and myself. We were doing some tests episodes under the PB&Slay umbrella, but eventually we liked the chemistry enough to make it full time. Just had to change that god awful name. This is the first time I've ever had a full time podcast without a niche theme where I can just riff and I'm excited for it. We talk about life, random topics, and do some improv. We also talk about God a weird amount. But it's fun and just an overall riff fest. Give it a chance. We're on Apple, Spotify, and YouTube. Watch the latest episode here and like, subscribe, and all that crap.