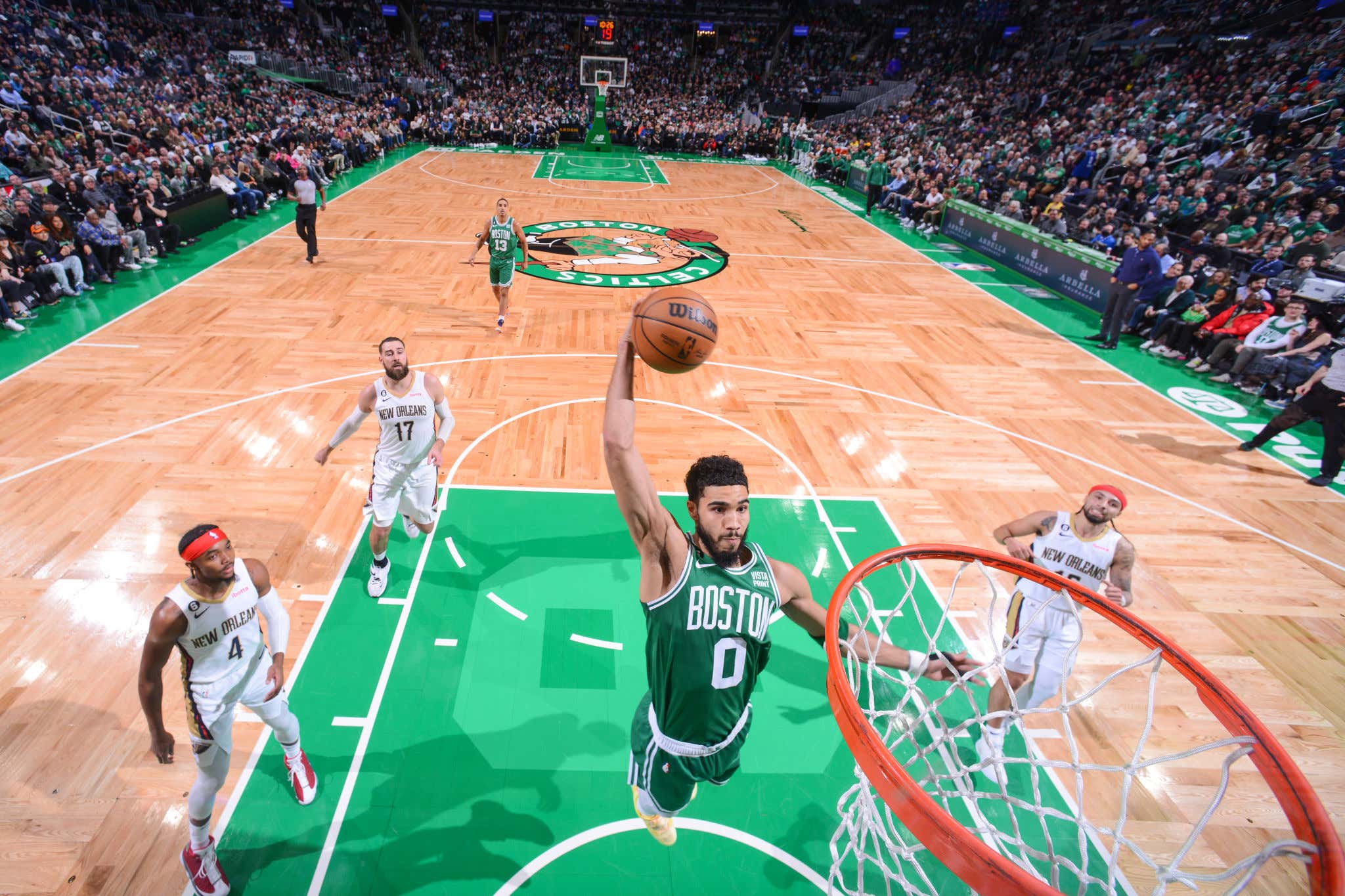 It's unfortunate that the Pelicans were without Zion, Brandon Ingram, and Herb Jones for the final meeting between these two teams this season unless both make the NBA Finals. At the same time, that's not my problem. The Celts were without Marcus Smart and Robert Williams, two starters themselves. Shit happens over the course of an NBA season, especially in January.

For the Celts, we've seen them fall into bad habits when they have a game like this on their schedule. Some call it playing down to their competition, some call it not respecting their opponent, some call it playing like assholes, I'm pretty sure if you're reading this blog then you know what I'm talking about. They don't play with the right energy or effort, they settle offensively, there's no resistance defensively, and it's all gross.

When you have these shorthanded games, it's pretty important that the two best players on the floor assert their dominance. This was one of those games where you should be able to look to your franchise players to make sure there wasn't any sort of regression or steps backward, and instead, the team continues to build on their positive momentum.

Thankfully, that it what we witnessed.

An East leading 4 wins in a row, 8-2 in their last 10, and an NBA best 30-12 on the season for our beloved Boston Celtics. They began their second half the exact same way they spend their first half, by winning. Once again they were asked to execute on both ends down the stretch, and once again they delivered. As I said after the Bulls game, right now it's about getting reps in. I have no problem that the Celts didn't blow NO out despite their absences because I am in favor of the Celts having to continuously execute in high pressure situations. These are the reps that will help you in the Spring, even if you maybe don't realize it in January.

It was also very fun to watch, so let's talk aboutit.

- I don't care how many times I've said it, it will never be enough and I will continue to say it at every opportunity I get.

Call me crazy, but 72 points and 22 rebounds from your two best players feels pretty good. Something tells me there aren't too many duos in the NBA right now that are doing shit like this on a nightly basis. The best part is this is nothing new really since last night was the 7th time this season that both Tatum/Brown have each scored 30 in a game. As you can imagine, that leads the NBA. So when someone like myself says this is the NBA's best duo, just accept it. Whether you use the eye test or their actual production, there is no duo like the Jays in the entire league. Sorry if this offends.

As I always say, perspective is important. I think it's important that while we're in the middle of this level of dominance from these two young franchise players, we understand what it means historically within this franchise. The short answer is we're watching a generational duo

It was pretty clear early on that given who the Pelicans had available, there really wasn't anyone who was going to be able to contain these wings. Both Jaylen and Tatum spent all night getting to whatever spot they wanted, and after a pretty brutal shooting night against the Bulls from Jaylen, look at how he responded 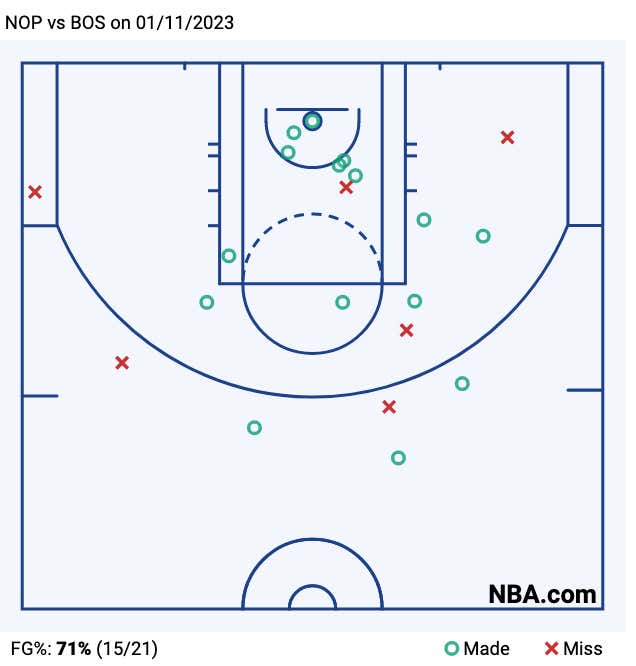 That's a guy who maximized his strengths offensively. Elite at the rim, absolutely money from the midrange, and 3-6 from deep. Some may give him shit for his 0 AST, but if you watched this game you saw that Jaylen had one role in this game and that was to get buckets.

With Tatum, I wouldn't even say this was one of his better shooting games (10-22), but then you look down and he also has 30+. That's pretty fucking nuts considering a 31/10/4 night would be a big night for a lot of players in the NBA. For Tatum, this was his "meh" type of night. Think about how crazy that is. When it came time to make sure the Celts closed the door, it was Tatum who stepped up with 14 fourth quarter points on 5-7 shooting. This came after Jaylen's 18 point third quarter which just goes to show that when you play the Boston Celtics, there is no break. Once you get done dealing with one, the other starts to dominate. What a blessing.

- One of the weirdest parts of the few weeks that Malcolm Brogdon was struggling was the fact that for whatever reason he looked like a player that didn't even entertain the thought of looking for his own shot. He was passive, he overpassed, and often times those would lead to live ball turnovers. It didn't feel like he had a rhthym on his jumper/layups mostly because he basically never took any.

Over the last 4-5 games, not only has Brogdon's efficiency recovered, but his approach has as well. It's very obvious when the Celts are getting a more aggressive version of Brogdon, and look at what a difference it makes

During the Celts current 4 game winning streak, Brogdon has more than pulled his weight which is great to see especially since Smart has missed the last few.

The biggest thing is probably how his 3PT shooting has recovered after a pretty brutal month, but last night's performance does more to show me he's out of his slump than the percentages do. Those will fluctuate over time, what has to remain consistent is Brogdon's aggressiveness. I loved the way he looked for his pullup jumper with the second unit. When defenses are forced to spend so much effort worrying about the Jays, that's when I want Brogdon to attack just like he did in this game. It also appears that Brogdon has remembered how to dribble, and his TOs are way down from where they were during his struggles.

- I said after the Bulls win that Al Horforfd was a gift from God. I would like to take this opportunity to double down on that statement

14/3/4 on 5-8 (4-6) in his 31 minutes, given that Al is going to get tonight off since it's a B2B, it was important that he show up and come through in this game. I love that he's turned into strictly a 3pt shooter and defender, because we all know what happens when Al has fresh legs come the Spring. This role they've created for him is perfect for this stage of his career and it's why you have to take the good with the bad. You have to remember that unfortunately Al is old as shit, so there will be games where he looks his age and there will be games he looks 27.

Last night was one of those 27 year old performances. He looks fresh, he looks confident, and he looks like a guy that is still making a gigantic impact. Defensively he was as solid as he's ever been and more than held his own against Valanciunas, and whether the Celts use him as a safety valve offensively or they actually run shit through Al and utilize his skill as a passer, chances are things are going to work out well.

My only critique would be that he hasn't found a way to travel back in time and actually be 29. I would give anything to have prime Al Horford with this current Celts group.

- We're seeing why it's imperative that you love and trust Mazzulla Ball. The sooner you accept it as your guiding light in life the easier things will be.

- If you look back in NBA history, you'll see that essentially every single NBA champion since the beggining of time has won 40 games before losing their 20th. It's a very, very important box to check if you are someone who wants to win a title. Outside of the shortened Covid seasons, it's hard to find a champ that did not accomplish this.

- Great work by everyone to make sure the Celts controlled the glass. They won the rebounding battle 50-33 and only allowed 4 OREB. Valanciunas didn't have a single one which I found surprising, and to me that's all energy and effort. When we see the Celts struggle in this department, chances are they are playing lazy, losing basketball. When they are on their shit on the defensive end and finish possessions clean, they tend to do alright.

- It's not surprising that without their two best defenders available that the Celts defense didn't look that great. Given the firepower that the Pelicans were missing, I didn't exactly love giving up 114 points on 51/36% splits. Only Naji Marshall (18 points) didn't shoot at least 50% in terms of the Pelicans starters, and I think we can all agree that CJ McCollum was an absolute problem.

At first it looked like he was just picking on Sam Hauser, but no. He cooked everyone

Guy was automatic in that first half (8-11), and it got to the point where the Celts were forced to double him on the catch just so he would be forced to pass the ball. I would say it was CJs shotmaking that prevented the Celts from really opening things up, and it didn't really matter what the Celts tried on him. Sometimes a guy is that locked in.

- Along these lines, I don't really care who is out, the Celts should never be giving up 60/83% quarters like they did in the first. That was gross.

- Not a great night for 3 of the better three point shooters on this roster with Grant/Hauser/Payton combining to go 2-14 from three. They were really the ones that brought the team percentage down (34%), and the annoying part was nearly all of their attempts were fairly wide open.

- Given how awesome he's been when he touches the paint, it was annoying to see that 4 of Derrick White's 6 FGA were 3PA (1-4). It's not that they were bad shots, they were open and in the flow of the offense. I just wanted to see him touch the paint more because when he does that things work out and his confidence grows. One that happens the 3PA start falling.

I thought Derrick was terrific as a passer in this game, but I would have loved a few more paint FGA.

- We all want Payton to play more, but it was clear in this game that at the moment he's struggling with his feel of the game. These back to back fastbreaks pretty much prove it

He was also pretty short on everything offensively outside of his first 3P bomb, and to me this isn't a skill or talent issue, it's a "I've barely played at all in weeks" issue.

These are the kind of mistakes you get when your rhythm is off and your feel for the game has dipped because that shit usually comes with reps. I feel for him because he only has a few opportunities to see the floor, and you know those TOs kept him up all night last night.

Alright, so here we go. 4 in a row with a B2B tonight in BKN. No KD, but whatever. The Nets are playing well and have had 3 days off since their last game. Al is going to sit, but Rob and Smart should be back so there should be no excuse to not show up. It's important to take care of these H2H matchups with a division opponent and someone who is chasing you in the standings.

Play like they did last night (with some improved defense) and you should be good. Love and Trust.