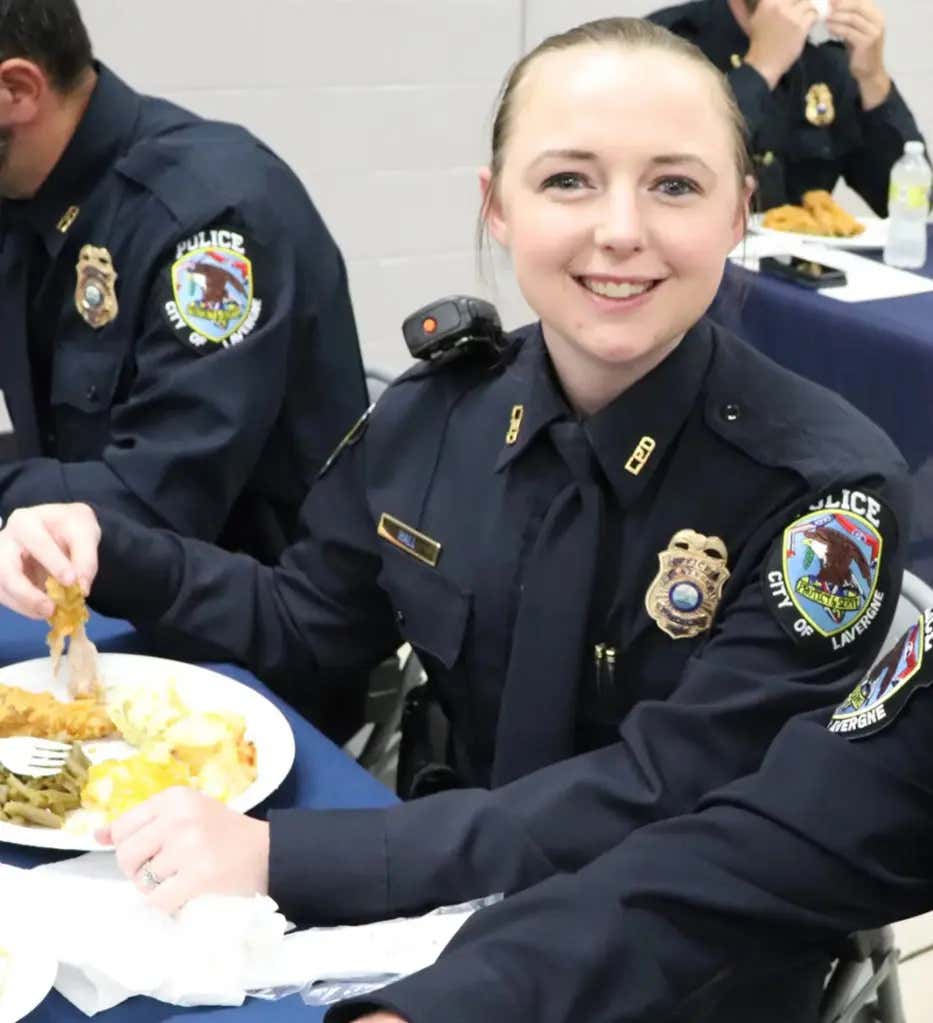 In the most predictable development of all time, we have an update on Maegan Hall, the 2nd year officer of the LaVergne, TN Police Department. After all, the more people are involved in a news story, the more layers it's going to have. And the more co-worker sex partners a person has:

… that number will increase exponentially.

And Officer Hall's situation is, of course, no exception. Because almost lost in all this, is the fact this law enforcement professional is married. From yesterday's post:

Daily Mail - Hall, who is married, is also accused of revealing her breast while at a steamy 'family' Memorial Day boat party. …

Hall was open about her relationships with the other officers and once bragged to Magliocco about Officer Powell's d*** after performing oral sex on him while on duty, according to the report.

Before Hall was officially hired on the force, she had met up at Officer McGowan's house with her husband and another female.

At the time, Hall was a candidate and had taken her clothes off along with the other female.

'Hall’s husband got upset,' the report reads. 'During that visit, McGowan admitted to taking out his penis with Hall in the room and taking a photo of it. He sent that photo to Hall.'

Source -  Ex-cop Maegan Hall said that she and her husband, Jedidiah Hall, were in an open marriage — although he did not seem to be on board, according to an internal investigation at the La Vergne Police Department. …

Maegan … and her fellow law officers allegedly engaged in wild affairs that included exchanging nude pictures, taking her top off at a hot tub party, and even having oral sex with two officers.

Two other officers who allegedly had romps with Hall — Patrick Magliocco and Larry Holladay — kept their jobs but were suspended, according to reports.

In the Dec. 28 report, Magliocco said he had seen Hall and Holladay kiss while watching football at a party, and said Hall had kissed his own wife, Amy, after learning they had an “open marriage,” according to the document.

Well let this be a lesson to us all. To those of us who are married, and those considering entering into one. The experts always say the key to a happy, healthy committed relationship is open and honest communication. Now personally I've never tried it. And really don't know if I've ever met someone who has. Just talk to any married man who has found himself standing at the edge of the "Are you OK with coming to my mother's with me?" minefield what he thinks the key to a successful marriage is. I promise you "honesty" won't be high on his list. By the same token, show me one wife in existence who uses "Nope. Nothing's wrong," when nothing is actually wrong. We all take the path of least resistance. Self-edit. Rely on body language and other non-verbal clues to get messages across. Keep things to ourselves in order to keep the peace.

But if ever there was an issue that calls for complete and total honesty up front, it's the concept of the Open Marriage. If that's the lifestyle you think you need in order to stay happy, have at it. I'm not here to judge you. Wait. Strike that. I am absolutely judging you. But it's your life. Grab your sidepieces and ride the express to Pound Town to your heart's content.

All I'm suggesting is that you need to talk about it. You can't have your Jedidiah finding out around town that Maegan is telling her fellow cops she's in an Open Marriage. First of all, it makes him look like the cuck he apparently didn't know he was. Second, that's the worst way to find out you could've been buttering your toast on the other side as well. That's a combination punch of humiliation he'll never get over.

So an Open Marriage is definitely an arrangement that has to be worked out in advance. Down to the smallest detail. You've got to work out all the contingencies. From whether a 3-way with a co-worker and his wife is acceptable, all the way to what happens if you blow your career, along with your fellow officers, just two years into it. You have to establish the ground rules and stick to them, for all involved. Before you even pick the wedding date. I mean, you don't golf against a guy for money without working out the bet ahead of time. Is it match play? Stroke play? Modified Stableford scoring? Birdies, polies and barkies? This poor guy was playing every shot where it lie, while she was rolling over balls and not counting strokes. Only in her case, the balls and strokes were literal.

Sure, you might argue that given the fact she got naked with another woman in a guy's house, Jedidiah might have suspected something was amiss. But I won't tolerate your victim shaming. The important takeaway is that a little communication on this most important of marital issues is absolutely key. Decide in advance who she can be going down on, how many partners she can have at any one time, who she can get naked in front of, and so on. Maegan Hall would still be out of work and unemployable in any law enforcement capacity. But at least their marriage would be better off. Word to the wise.