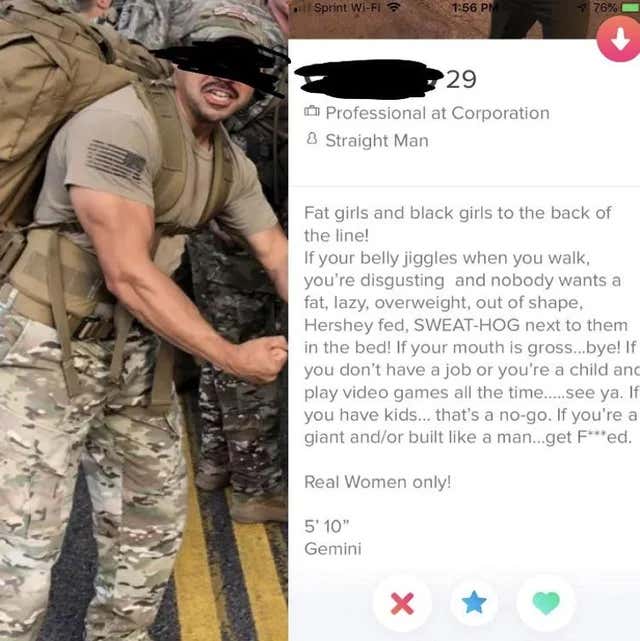 Well goodness gracious, fella. Pull that thing out and let me give it a little bit of a suckin right here and right now. Imagine being a lady or a damsel reading this (provided that you can ignore the blatant racism and general vibe). You'd be able to fill Lake Powell back up with the juices emanating from your loins. If you aren't aware of just how wet that is, check this shit out.

Lake Powell's surface has already fallen 170 feet. Lake Powell drought threatens power loss for millions. 1:27. In October 2022, Lake Powell was a quarter full due to a historic drought, which threatened power supplied to millions by the Glen Canyon Dam in Page, Ariz.

I understand the nature of wanting to appear "badass." But, fellas, does this work? I've never been on a dating app. I've been married for a long time and would probably wanna die if I ever had to do that. That being said, even though I haven't dated on those apps, I can't imagine that saying you don't want fats, gamers, moms, bad-teethed, or the unemployed doesnt make ladies clamor to ride your dick reverse cowgirl. Nope. I can't imagine seeing that list and asking this fella to pull his pants down in order to treat his dick like when you're trying to siphon gas with a garden hose.

Mixing it up is my advice. I'd say leave a few of those don't wants out. Include some do wants. Like, "I want someone with nice tits, A BRAIN, and the ability to ski for a time period of longer than 2 hours" or "I want someone with an ass that dont quit, a college graduate in middle management with an eye on advancement, and would rather be by a mountain stream than streaming on xbox." Something like that. Dont forget that it's ok to have physical characteristics that you enjoy. After all, everyone wants to date in order to fuck otherwise you'd be on Friender not Tinder. You're allowed to like tits, ass, and even coochie. That's fine. Dont let people shame you for your turn ons. But, we don't have to be so overt about it.

You'd think this dude being a military man would know that. Three ups and two downs. Three good things and two bad. All bad is all bad. It's as simple as that.