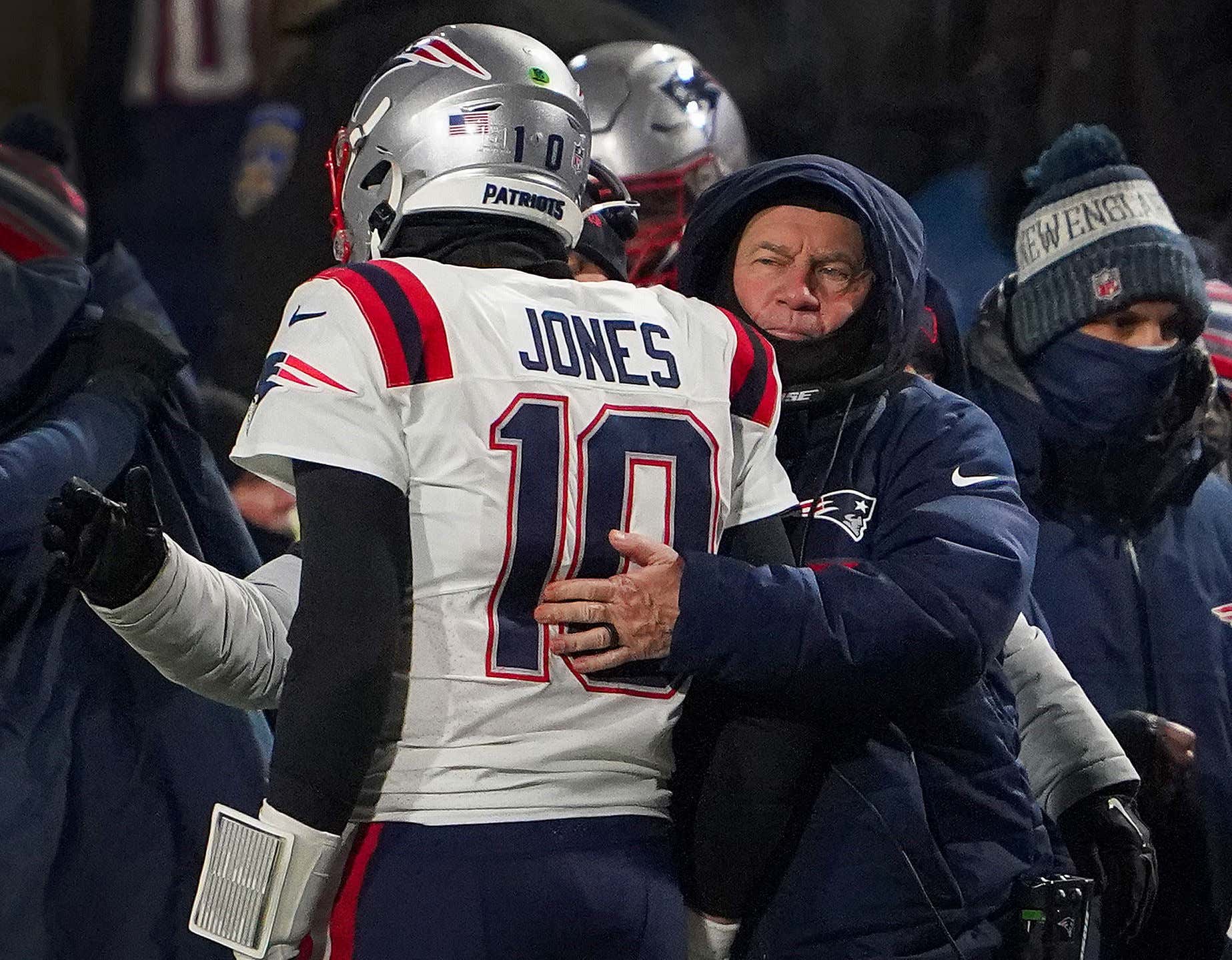 And so begins another Patriots offseason, far earlier than anyone wanted. But definitely when they deserved to. There were just too many failures. Too many Bizarro World mistakes at critical times. Bad penalties. Special teams failures. Critical turnovers. The old 30 yards backwards pass from a wide receiver to a defensive end in a tie game with 0:00 on the clock. Those will get you every time. And unfortunately, the AFC East isn't the NFC South. Here, 8-9 will get you eliminated, not a home game in the playoffs. Such are the fortunes of war.

And this offseason gets underway as they do in good times and in bad. With a Belichick presser where he talks about how every process, procedure, and person in the organization will be evaluated, beginning with a sitdown between him and Mr. Kraft. Which he addressed:

But as we do every year, evaluate everything, and try to make the best decisions we can to move forward, to be more competitive, to have a stronger team in the future. So, Robert [Kraft] and I will talk about that, talk about that as a staff and certainly individual conversations with many of the players, as we always do, well, all the players but there's some that are obviously more urgent or will be more timely than others. But it'll be a comprehensive course of action as it always is. I don't see the process being really any different, but we need to have better results. That's really the bottom line.

And given that the last postseason game the franchise has one is still Super Bowl LIII four years ago, it goes without saying no one will be spared to get those better results we need. A point that was driven home by an email from RKK and Kraft the Younger to all season ticket holders already: 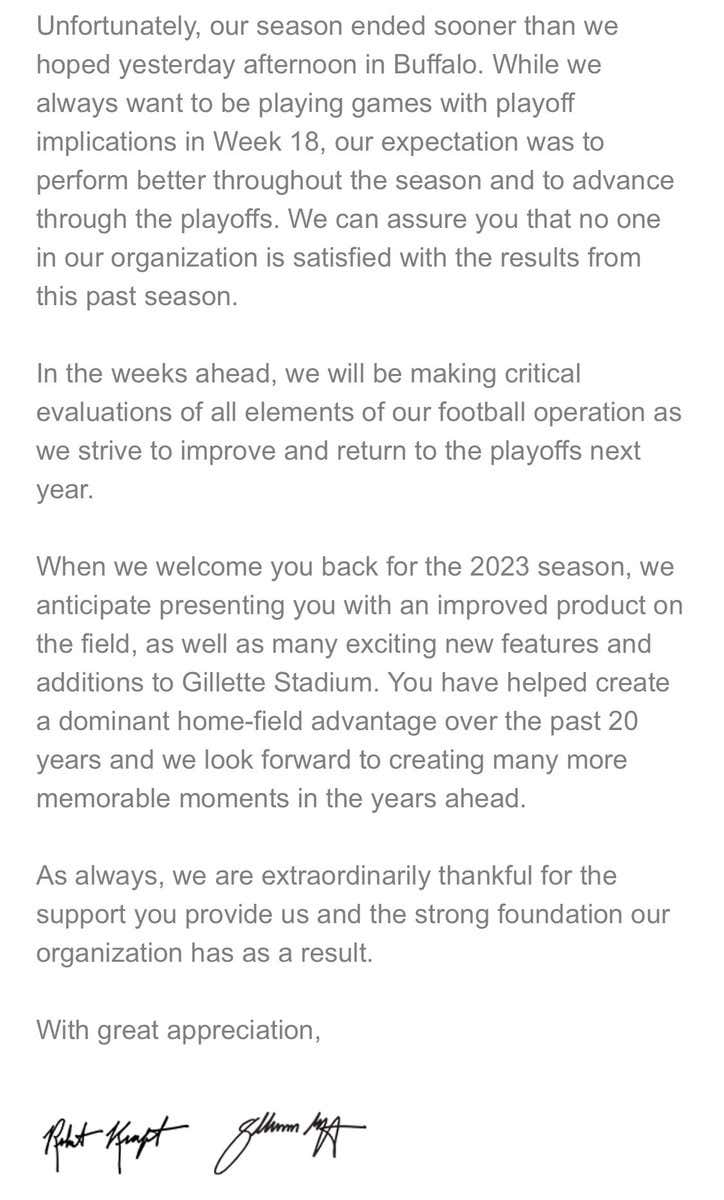 And if anyone was under the impression that a quarterback coming off a regressive, step-back Year 2 after being the best rookie QB in his class was going to get a pass in all this, they clearly haven't been paying attention for the last 23 years. Even if you're one of us who believes Mac Jones was done dirty by the decision to name two guys with zero experience coaching offense as his coordinator and QB coach, respectively, that does not get him off the hook.

Q: With Mac Jones health permitting, is he a player that you envision being your starting quarterback next season? Or is this a position you need to reevaluate this offseason?

BB: Mac has the ability to play quarterback in this league. We have to all work together to try to find the best way as a football team, which obviously the quarterback is an important position, to be more productive than we were this year. So that's incumbent upon all of us. We'll all work together on that. Again, look for better results.

I love it. Help me, how I do love it so. Belichick fettered Jones to the corpses of Matt Patricia and Joe Judge, tasked them with overhauling the system he thrived in as a rookie, he struggled with it for most of the season, and when asked about it, he goes all literal like he's Drax the Destroyer. He is a football player who has plays quarterback in this league. Nothing goes over my head. My reflexes are too fast. I would catch it.

And, as you would also know if you've following along for over two decades now, Belichick is getting dragged for putting it this way. How he doesn't sound confident in his QB. How he's not being supportive. Casting doubt as to whether he thinks Jones is in his future plans. But be honest. Where's the lie?

As I've made it abundantly clear, when it comes to Mac Jones, I'm an easy lay. But he's not absolved of all blame for being under .500. He's not high on the list of problems by any means. His coaches couldn't get plays called in a reasonable amount of time. It took three months to get the offensive line sorted out and play to a barely acceptable level. And was not nearly enough consistency from any of his wideouts or tight ends, especially given how much cap money was invested at those positions.

That said, he still should've been better than he was. It goes back to that core tenet of Bill Parcells' philosophy where he said, "If you give players an excuse to fail, they'll take it every time." If you're going to get a Year 3 out of him that is an improvement over his rookie season and especially this one, you have to demand more. As one of LBJ's cabinet secretaries once put it, "Self-pity is the easily the most destructive of the non-pharmaceutical narcotics." So don't even begin to suggest Jones was a victim of circumstances. He has to be held to the highest standard of anyone if he's going to become the guy who can do into Buffalo on a January day in front of a frenzied crowd and steal a crucial win.

The fact remains, he finished the season 11th in interception %, which isn't terrible. And 29th in touchdown %, which definitely is. He had just eight red zone touchdowns on the season, which was 26th in the league. And none of them were from outside the opponents' 10. His completion % from inside the 10 was barely over 50%. And on the year, he finished 26th in passer rating, which is down among a bunch of guys who got benched (Matt Ryan) and some whose fans wish he was (Russell Wilson).

None of that needs to be put in a sock like rolls of nickels and used to beat Jones over the head. But it's all relevant. Part of the cold, hard calculus of reviewing everybody's season and making things better. Mac has to be better in the confined spaces of the red zone. Better on 3rd downs. Better at keeping his composure and leading. Better at sensing pressure. Just better. And yet, it is entirely accurate to say "He has the ability to play quarterback in this league." What we need him to be is very, very good at playing quarterback in this league on a consistent basis. And I believe with all my brain that it's entirely accurate to say he can. The time to start proving it began today.