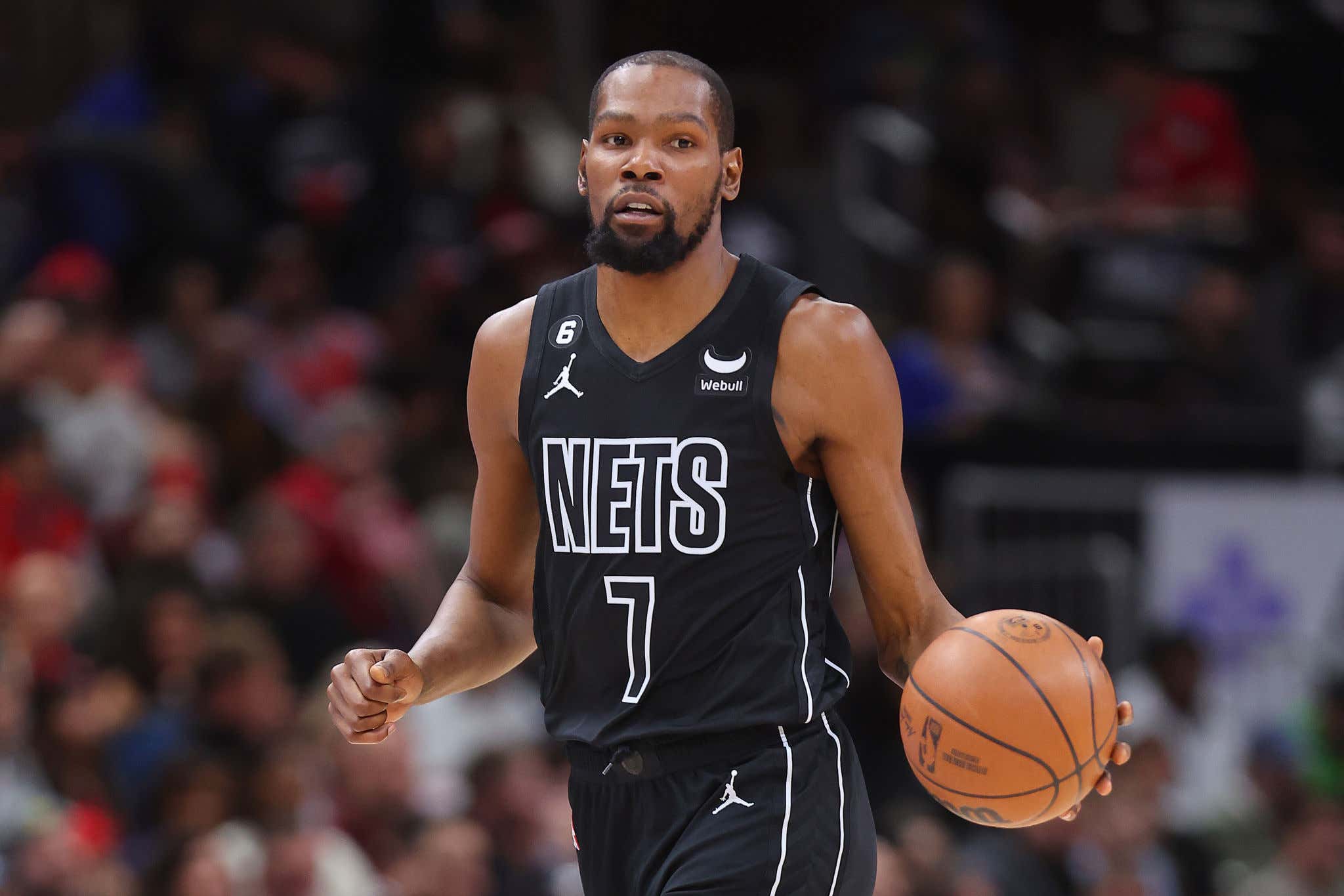 There is not a hotter team in the NBA right now than the Brooklyn Nets. Ever since Kyrie returned to the lineup, they've been killing everyone

and it's honestly been a collective effort. Kyrie and KD have been great, but so have the role players like Nic Claxton, Yuta Watanabe, Ben Simmons, Seth Curry, Joe Harris, etc. There is certainly nothing fluky about their current run because when you have a sample size as large as this, it's OK to admit the Nets are actually good. I know people (myself included) loved to roast them while they had all that drama and underachievement, but we should acknowledge that they've been great for well over a month now.

Unfortunately, in the final moments of the 3rd quarter last night against the Heat, this happened

These are always scary plays whenever you have someone diving into the legs of a guy who maybe wasn't ready for it. As you can see, KD isn't even looking when Butler falls into him. Nothing dirty, just one of those weird/random plays that can happen during a game. It's not too different from the last time KD got hurt last year

and we saw how that impacted the Nets' season. KD had his MRI today and the results are a mixed bag

On one hand, it sucks that someone who was playing at a legit MVP level is going to be sidelined for at least two weeks. Looking at the Nets schedule, two weeks from today would be around 7 games:

it stinks we won't get to see BKN/BOS at full strength but given how well the Nets are playing they should be able to survive if in fact Durant is able to return after two weeks. As a reminder, this is how he handled the previous two times this happened

But it's also great that all he did was sprain it and there's optimism that it won't be as bad as last year. Coming off his Achilles stuff it obviously makes the most sense to be EXTRA cautious with any sort fo KD injury/rehab/return, especially now that the Nets have played themselves into contention.

this injury stinks. Who knows how long all these legends are going to hang around, so I'm in the camp of wanting to see them play as much as possible. The Injury Gods are real dicks for taking away this version of KD from us. The way both he and Luka make the NBA game look so easy makes no goddamn sense. It's almost as if KD is out there on the floor by himself offensively to the point where it does not matter what the opposing defense tries to do. An all time scorer in every sense.

If you subscribe to the theory that the Nets won't rush KD back, the next month or so is going to be a great test

That's a much tougher stretch than what the Nets have currently run through over their last 20 or so games, and considering Durant was dominant in every game he played, it'll be interesting to see how the Nets now adjust. It's not like replacing KD is easy simply because few players in the league are able to do what he does on the court. Not just from a production standpoint, but a gravity standpoint. You have to always worry about where Durant is. This will now change how opposing defenses load up on guys like Kyrie, so someone else is going to have to step up big time to help alleviate some of that attention.

With the Eastern Conference race at the top so close, this is obviously huge news. Losing an MVP candidate is never easy, and if you aren't careful just one bad stretch can have serious implications on your seeding if you find yourself currently in the top 4.

The league is obviously better when Durant is active and healthy, so here's to praying for a quick recovery.