I've watched this video no less than a thousand times this morning and just can't get enough of it. I have so many questions.

Who brought the giant box TV to the punk rock show? Who let him in? Did he hold the TV all night until he felt like the moment was just right to huck it into the pit? Maybe the TV was just part of the show/stage, and in the melee of punk rockness it just had to make its way into the pit? Also, did the fella who got walloped by the television die?

There's a couple characters in this video I want to break down immediately....

An absolute madman who is just completely lost in the sauce - and considering most of the kids at this punk festival are probably straight edge anyway (can't get a girlfriend/don't know anyone cool who has drugs/alcohol) - that "sauce" is most likely just the music itself. On some level, I respect that.

I mean - there's few things as punk rock as launching a television into a mosh pit while the band on stage is kicking into their set. Plus, maybe from his perspective, he's like, "We can throw spinning backfists and roundhouse kicks in the pit but can't play catch with my old TV?!", you know?!

Unfortunately though, you CANNOT play catch with your old TV in the mosh pit. It's Mosh Pit Etiquette 101 not to do that.

Actually one of the three main rules of pits....

1. Pick up anyone who falls down as quickly as possible.

2. No intentional punching in the face. That's not cool.

3. No throwing massive fucking televisions from the 1990s at other dudes trying to vibe.

We don't have much context from the video, but it almost looks like he was just getting up from the ground AS he got hit by the television, and if that's the case - he never had a chance.

You can see only his ankle by the end of the video, but it shows him going down at such a rapid velocity that you'd have to imagine that TV sent him straight into the crust of the earth.

Also, considering Rule #1 on the Mosh Pit Etiquette list I just shared above, he was likely picked up by his fellow moshers immediately. I'm just not sure so they picked up a conscious body.

Imagine they just Weekend At Bernie's'd his body through the crowd the rest of the night? Would be a kind of awesome way to go out. Crowd surf my dead body into my coffin when I go.

3) Leaning On The Wall Guys 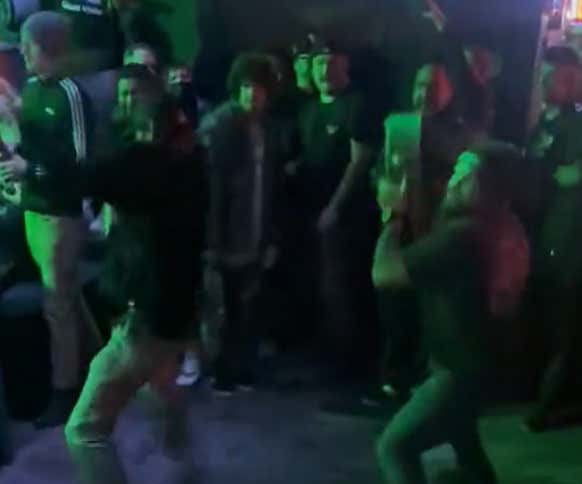 As much as I hate to admit it, I'm with these fellas at each and every show I go to. I'm a lean on the wall guy. I'd love to sit here and tell you I'm getting rowdy in the pit and moving and shaking like the music is taking over me whenever I'm at a great concert, but to be completely honest, I'm 24 years old and already have rheumatoid arthritis. I've got as much wrong with me as I look like I have wrong with me - not to mention I'd be about a buck sixty if I were soaking wet with boots on.

I'm just not built for the pit and that's okay.

I would've LOVED to be with these lean on the wall guys this weekend, though. I can't imagine watching all of this unfold in person, but without any of the fear of dying in the pit. Imagine the faces they all made at each other when the TV made contact?!

Truly a memory they'll have for life. They'll tell this story to their future punk rock grandkids.

Finally, I'm just pretty sure that's Spider moshing by himself in the front. Can't confirm, but I think it's him.

Overall, this an easy frontrunner for my favorite out-of-context video of the year. Last year, Smitty easily took the cake….

P.S. This was taken from FYAFest this weekend which had a really cool lineup of modern punk bands worth checking out if you're into that genre. No Pressure was one of the biggest names of the bill and they're my personal favorite….

Concert videographer hate5six was there (who filmed the last Rage Against The Machine tour), so keep an eye out on his pages for videos, because these kinds of fests are the most beautiful clusterfucks you'll ever see….

MASSIVE UPDATE: It turns out what I thought was a full-sized TV is actually just the front HALF of the broken TV from this video….