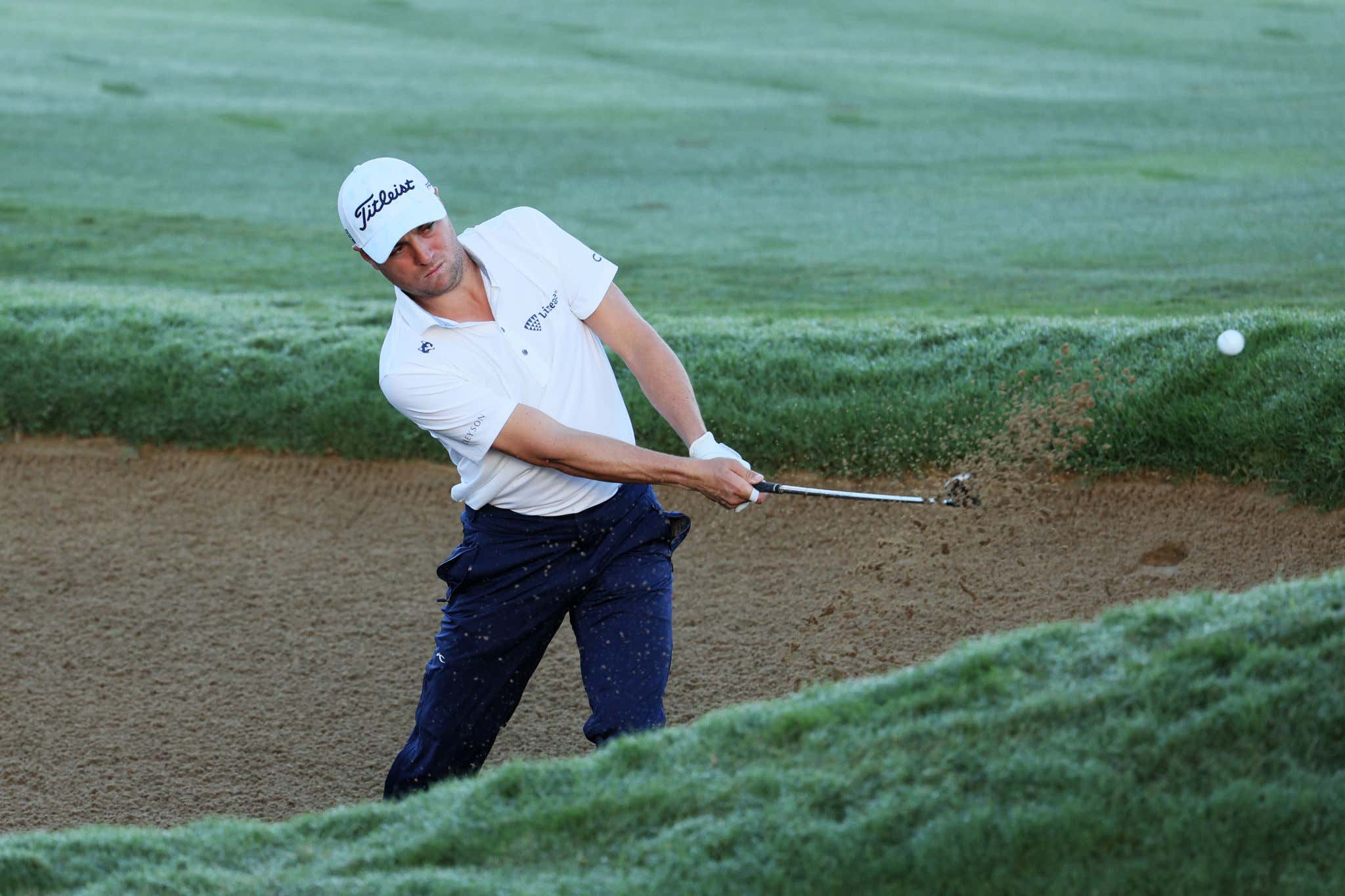 I'm often asked what I actually do when I'm at a PGA Tour event during a practice round. The answer: schmooze. Schmooze hard. Tuesday and Wednesday are great days for building relationships with players, because once the tournament begins they go into autopilot, press-conference-madlibs mode. Which makes sense—these guys are world-class athletes playing for millions of dollars, and they're deeply committed to their routines. So the days to gossip, kick around ideas, develop friendships and get scoops are early in the week. And golf gives us media types an opportunity that doesn't really exist in other sports: we get to walk the fairways alongside the best players on earth and shoot the shit as they prepare for an event. It'd be like being on the practice field and casually chatting with Patrick Mahomes between reps.

It's cool as hell, and it often leads to cool little nuggets of information. The problem is (was?) that these little nuggets hardly clear the traditional "article" threshold—there's just not enough there to sustain an entire article that isn't entirely clickbait. But they also require some context that makes them too long for Twitter, and I'm always deleting words to try to fit under the character limit. This blog, then, is the perfect place to share with you all some of the cool stuff I'm hearing. So, let's hop inside the ropes.

—Scottie Scheffler's will host perhaps the most anticipated Champions Dinner in Masters history. Augusta's decision not to ban the qualified LIV players means the six Masters winners who've joined the Saudi-backed league—Phil Mickelson, Dustin Johnson, Bubba Watson, Patrick Reed, Charl Schwartzel and Sergio Garcia—will be in the same room as some men who abhor the decision they've made. Fred Couples, for example, said this about Phil: “These guys—you’ve seen their interviews, right? Have you ever seen Phil look so stupid in his life? They know it’s a joke.”

On Tuesday, Jon Rahm said he wishes he could be a fly on the wall in that room. So when Scottie stepped to the podium on Wednesday, I asked if he's planning a feel-good speech to bring everyone together. He responded with a funny story.

"I haven't seen many of the LIV guys," he said. I saw Bubba on vacation this year, and I told him that I was just going to have a separate table for him in the corner by himself. Only kidding, obviously.

"In the world of golf, I think it's definitely a little sad what's happening. It's kind of weird this week. I get to my locker, and my locker's next to Cam Smith's locker, because he's a past champ here, and he's not here. So it's a little strange, but golf will move on. I think this stuff just takes time. Things will heal and we'll see what happens."

—Tony Finau just loves golf, man. If you follow him on Instagram you know he's constantly playing, even on his off weeks…and apparently he sometimes adds more golf to his work weeks, too. The entire Finau clan is here, and so is the entire Summerhays clan—including Preston and Grace, both excellent college players at Arizona State—but they're essentially one big unit. Boyd Summerhays has been Tony's coach for years, and the families are constantly hanging together. So Tony planned a multi-day family Ryder Cup-style competition to be carried out on Tuesday and Wednesday of this week. On Tuesday, Finau played a nine-hole practice round before heading over to Kapalua's Bay Course…and he was heading right back there Wednesday afternoon after his 18-hole practice round. For those keeping track: a 27-hole day and a 36-hole day on the two days leading into a tournament. Golf is what this man does.

Finau also got a kick out of the Social Media Swing Coaches who sounded the alarm after a video surfaced on Monday that appeared to show him working on a different backswing.

"They said I was becoming Matt Wolff-esque," he said with a laugh. Summerhays chimed in jokingly: "He wins three out of the last seven, and now they're changing everything!" Summerhays clarified that it's more of a rehearsal/drill than anything else, and that he likes to work on it in practice but that his in-competition swing looks rather different.

—Matt Fitzpatrick's no longer with Castore. Fitzpatrick had a breakout year, winning the U.S. Open in arguably the best tournament of 2022 and cracking the world top 10 for the first time. And he did it wearing Castore, a British apparel company that's sponsored Andy Murray in the past. Turns out it'll be just a one-year deal, as Fitzpatrick turned up to Kapalua wearing Greyson clothing. He said he has no official deal with the company, at least not yet, but does have a bright-red 2K patch on his left sleeve. We love 2K, for reasons you might already know.

—Keegan Bradley's lost a good 30 pounds since October. When you cover golf, you begin to identify players by their silhouettes. You're often looking at guys from 200+ yards away, so you learn their swings and their cadence and their gait. I did not recognize Bradley at all on Wednesday. He's never been fat, but now he's skinny. "No secret," he said as to how he did it. "Just eating better mainly." As someone who just officially went up from a size 32 waist to a size 34, I'm offended by how simple he made it sound.

—Justin Thomas is gaming a new putter this week. Gone is Thomas' familiar "fanged" Scotty Cameron, which he's used in different versions for years. He won the PGA Championship with a special Phantom T5 Prototype but putted only okay throughout the year, ranking 87th in strokes gained putting. So, in his first start in 2023, he's gaming a blade-style Scotty that he's had since middle school and hasn't put into competition since college. The reason? He was a little bored with the old one, started practicing with the blade—which he travels with frequently—and liked what he saw.

Thomas has a helluva history at Kapalua, winning the event twice and posting three other top-fives in his seven career starts here.

—The to-be-released Netflix golf show appears to be on track for a second season. Word began to trickle through Kapalua on Wednesday that the show's producers had begun reaching out to players about filming for S2. Typically Netflix does not blindly green-light further seasons before seeing viewership data from the first season, which obviously isn't possible as the show has not come out yet, so nothing is official yet. But, like Drive to Survive, this project does not appear to be a one-year one-off. As for when the first season's dropping, there's still no official word. Sooner rather than later.

—Kapalua might be underrated. It's the first design from legendary architectural duo Bill Coore and Ben Crenshaw, and it's somehow a nod to minimalism on the most dramatic piece of land possible. The course is built on the side of a mountain that cascades toward the ocean, and yet there's nothing hokey or unfair about it. The fairways are as wide as any on tour, which makes the course playable for its resort guests, and it's absolutely gettable without any wind—you'll recall that last year's winning score was a record 34 under, and second was 33 under. But it's designed for wind, and when it comes, it's a wonderful test that forces you to vary trajectories and control spin, for Coore/Crenshaw managed to engineer legitimate runoffs surrounding greens despite some of the softest turf on tour. Oh, and the views are decent. It's a masterpiece that is endlessly playable, and it's just plain fun. That's the point of this game, after all. I'm bummed to be heading home.