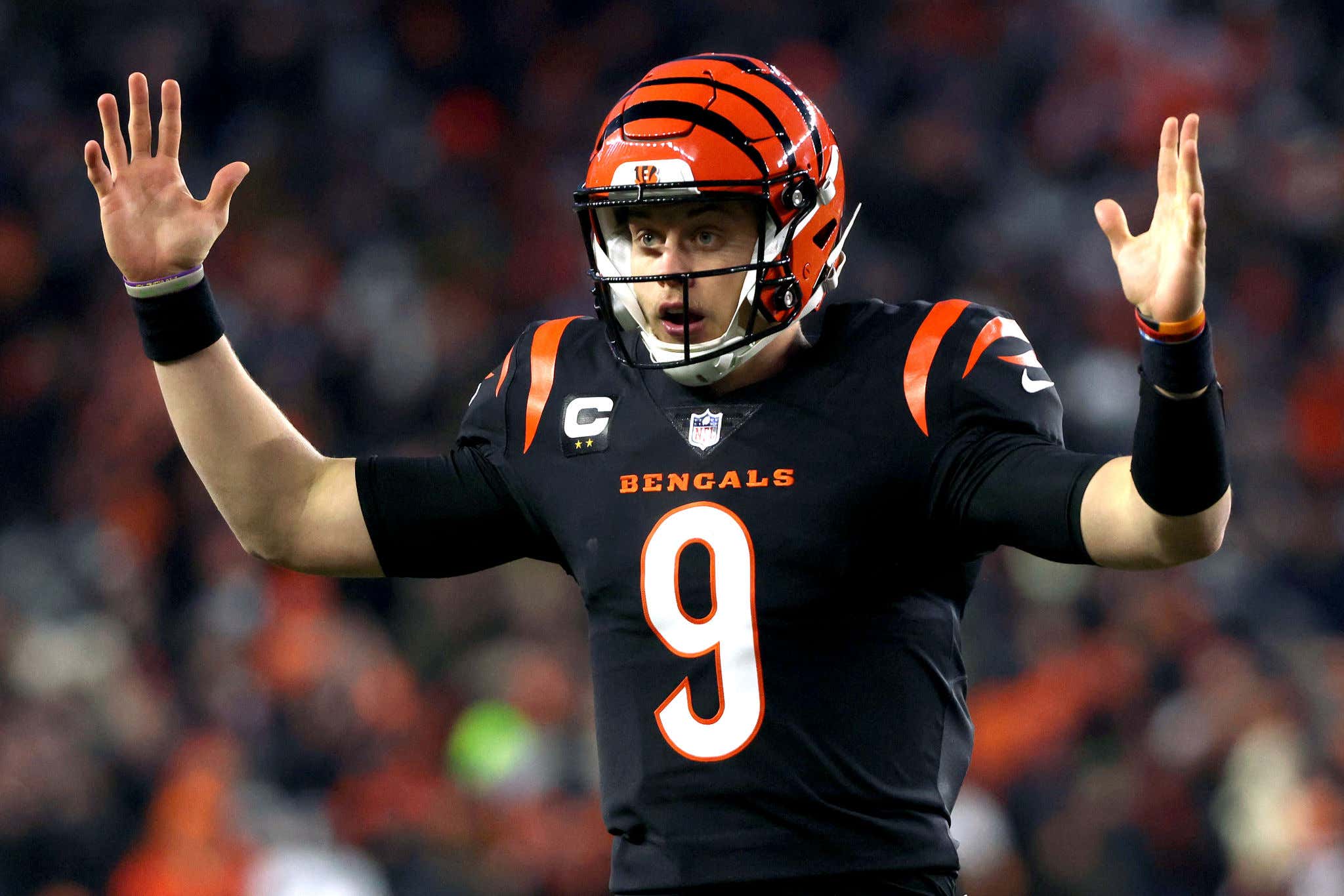 I feel like it doesn't go without saying just yet: all the positive thoughts, vibes and prayers possible for Damar Hamlin. His well-being took precedence over the biggest NFL game to date this season on Monday night when the Bills visited the Bengals, and rightfully so. Just hope Hamlin comes out of this OK.

The pro football world paused to deal with a truly unprecedented situation and made the right call. However, Week 18 is slated to roll on as scheduled. As the league office sorts out what to do about the Bills-Bengals matchup, multiple teams are gearing up to fight for playoff position just before the postseason kicks off.

With all that established, I hope you can get a chuckle or two out of these custom-tiered NFL power rankings, which will be the final edition because the 2022 regular season has already almost come and gone. Hard to believe.

We have two candidates for the No. 1 overall pick. Houston has the inside track and is likely to select a quarterback. If the Bears get it, they'll have their choice between Alabama EDGE Will Anderson Jr. or Georgia interior d-lineman Jalen Carter. Can't really go wrong, but I like Anderson.

The Texans are on the road in Indy, while Chicago hosts the Vikings sans Justin Fields. I expect both teams to lose and for Houston to have a new face of the franchise and possibly a new head coach like, say, Jim Harbaugh.

The Not In Terribly Good Shape Tier

The Colts stubbornly chain themselves to GM Chris Ballard once again. Still don't have a quarterback. In need of a coach. Yikes. Arizona's future is murky with Kyler Murray coming off ACL surgery, Kliff Kingsbury as a potential chopping block candidate and the infighting between coach and QB.

We'll wait and see if a coaching change helps Russell Wilson overcome an awful maiden campaign in Denver. Bad news is the Broncos miss out on a high draft pick due to the Wilson trade. Same goes for the Browns for selling their souls to acquire Deshaun Watson.

At least in the Rams' case, their blockbuster, swing-for-the-fences deals ultimately netted a Super Bowl. I'm just concerned about whether or not Aaron Donald truly wants to keep playing. Plus, Matthew Stafford was in concussion protocol multiple times in a three-week span.

As for the Saints, well, they're due to be almost $54 million in the red in 2023 salary cap space. Can't wait to see how they get under this time around. Always a fun annual event of the NFL offseason.

The Few Plays or Players Away Tier

For the most part, this is code for: NEED A QUARTERBACK. I think plays and players apply to Atlanta. Arthur Smith made one of the most underwhelming NFL rosters competitive for much of the year. Give him a competent field general, and the Falcons could be in the playoffs by next season. I'm not sure if the Panthers want to push their luck with Sam Darnold under center and Ben McAdoo calling plays, yet you can't deny that combo improbably worked quite well for Carolina down the stretch.

I admire the Jets for sticking up for Zach Wilson at the minute. I also think that's more due to their lack of a clear alternative and his high draft status than anything else. They really need to shore up the offensive line and generate a more consistent rushing attack, too.

As for the Commanders, their musical chairs stunt at QB ended with Carson Wentz shitting the bed in Week 17 and eliminated Washington from playoff contention. They have a toxic culture to overhaul and could stand to add a few veterans at key spots to aid that process, starting with the most important position on the field.

Cue the Shaq-famous, "I owe you an apology, I wasn't really familiar with your game" meme when it comes to Raiders QB Jarrett Stidham. Dude balled out against the 49ers defense. I'm sure it had something to do with Josh McDaniels sabotaging Derek Carr and doing his utmost to make his guy from New England look as amazing as possible, but Stidham went above and beyond any conspiracy theory I might fathom parading out there.

…But once again, it wasn't enough. Las Vegas lost to the Niners 37-34 in overtime. It was a microcosm of how the Raiders' season has gone. So many close calls. Too many losses. I wonder if McDaniels truly has the locker room bought in. In the event that he does, Las Vegas could be dangerous in 2023 if the front office can make some modest defensive improvements and give McDaniels whomever he wants to run his offense. Tom Brady, perhaps…!?!?

The Put Us Out Of Our Misery Tier

I guess Bucs fans and Steven Cheah can gaslight themselves into believing they'll somehow beat their Wild Card Round opponent at home, but really, did Tampa finally flip the switch in Week 17 against Carolina, or do they still suck? I'm inclined to lean toward the latter take. Then again, Tom Brady is still leading the Bucs and has dragged worse offensive skill position groups deep into the playoffs before.

As for the trio of AFC teams that round out this tier, well, the Patriots are the best of that bunch and have lost four of six. They look like they have a defensive coordinator calling offensive plays. Oh wait. There's a reason for that. It's because they do have a defensive coordinator calling offensive plays in Matt Patricia. Who would've thought that would blow up in New England's faces as opponents got the book on Patricia's predictable, oversimplified scheme? Apparently not Bill Belichick.

You think the Pats have it bad? Try the Titans and Dolphins on for size. Tennessee started 7-3 and haven't won since. Mike McDaniel began his coaching tenure with an 8-3 mark, only to watch Miami collapse amid a five-game slide. The Titans (for sure) and the Fins (quite possibly) will start a third-string QB as they battle for a playoff berth this weekend. WOOF.

I'm so torn on who I'd rather see snag the NFC's seventh seed between Detroit, Seattle and Green Bay. The former two teams are much better stories, hence their inclusion in this section. The Lions could knock off the Packers and get in following a 1-6 start, which is insane. That is, if the surprisingly upstart Seahawks don't knock off the Rams at home in the late-afternoon window.

Meanwhile, the Vikings and Giants already punched their playoff tickets. Good for them. If they weren't projected to square off against each other on Wild Card Weekend, they'd be my top two most confident choices to have one-and-done exits. Both should be happy they're in the dance to begin with.

The Getting Piping Hot At The Perfect Time Tier

A tad crazy to have the Steelers this high until you realize they've lost only twice since their Week 9 bye: By seven points to the Bengals in Cincinnati, and by two to the Ravens. Their defense is rolling, Kenny Pickett has orchestrated two straight game-winning drives, and Mike Tomlin may avoid his first losing season after all! Problem is, Pittsburgh needs to beat Cleveland, and get losses from the Dolphins and Pats just to make it into the playoffs.

Aaron Rodgers and the Packers improbably control their own playoff destiny. They have a true win-and-in scenario against the Lions in the friendly confines of Lambeau Field on Sunday night. I feel like Detroit might be more dangerous if the Seahawks win and eliminate them earlier in the day. If it's a legit duel for a postseason berth, I'd bet the younger Lions succumb to the pressure.

The Totally Dependent On Their QB's Dubious Health Tier

We've seen the Eagles lose twice since Jalen Hurts went down with a right throwing shoulder injury. Although the Ravens have hung tough without Lamar Jackson, they will not win in the playoffs if he's not suiting up. It sucks for both these would-be championship contenders that their electrifying signal-callers are still on the mend. Good news for Philly is Hurts was a limited participant in Wednesday's walkthrough practice.

The Too Much Historical Baggage To Trust Tier

You don't think this shit is real? Ask any fan from either of these franchises. I love what I'm seeing out of Justin Herbert and the Bolts' defense as they keep getting healthier. If not for the lengthy history of Chargers heartbreak, I'd have them in the running to lift the Lombardi Trophy. As things stand now, I'm in a "believe it when I see it" mindset, because Brandon Staley is one reckless game management decision away from derailing all of the Bolts' mojo.

Then you have the so-called "America's Team" whose failure so much of America actually basks in the glory of. I don't root against the Cowboys. They're always kinda fascinating, in part due to their penchant for collapses.

The 49ers are fourth because of Brock Purdy. They otherwise have the most loaded roster and best defense of anyone remaining.

I can only hope the Bills rally around the Damar Hamlin situation and put their best foot forward in the postseason. That's all I really have to say about them. They're an excellent team top to bottom, and Josh Allen is the ultimate X-factor at quarterback.

Then you have the four-time reigning AFC Championship Game participants, the Kansas City Chiefs. Were it not for the Bengals' recent 3-0 record against them, Kansas City would be No. 1. Alas, sorry Chiefs faithful, I just gotta let out one last WHO DEYYYYYYYYYYYYYYYYYYYY.