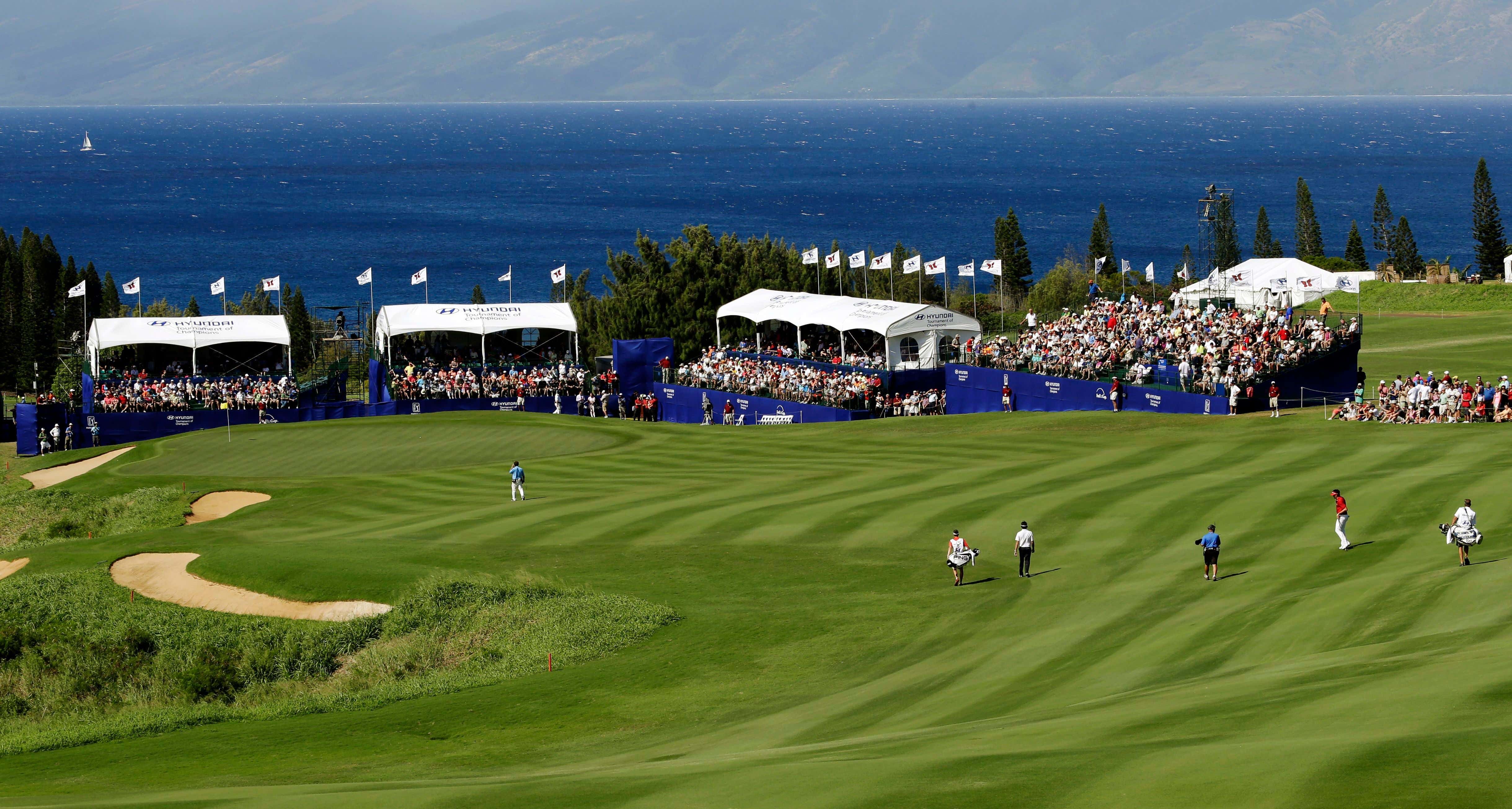 Aloha bitches!!! We're back in a big way in 2023 with the PGA Tour hitting Maui for the annual Tournament of Champions. For those who don't know (and if the name doesn't give it away), this tournament is reserved for anyone who won a PGA Tour tournament in the past year. Starting this year, they have also invited anyone else who made the Tour Championship as well. So for those reasons, it's a highly regarded tournament that gives us 39 of the world's very best on a gorgeous resort golf course.

Everyone who qualified except for Rory McIlroy has elected to play, which is a bit peculiar. He was also the only qualifier to skip it last year, but this event has been marketed far and wide as the kickoff for another pivotal year for the Tour. After spending 2022 on his soapbox and being postured as the posterboy of the Tour (and rightfully so), you would think the PGA Tour and Rory would have made it a point for him to be out there this week. Especially given that this is one of the newly minted "elevated" events on Tour. Alas, each of the players with top tier status have the right to skip one "elevated" event a year, and Rory has chosen this one. That's his prerogative.

This tournament is one of the great birdiefests on Tour. I'll get into why shortly, but last year's event in particular was out of control. A PGA Tour record of 34 under par was recorded by Cam Smith, who we all know will not be here to defend his title. Jon Rahm (still PGA Tour) was right on his tail at -33 and poor Matt Jones (now a big time LIV Golf guy) collected a 3rd place check for coming in at -32. Insane. 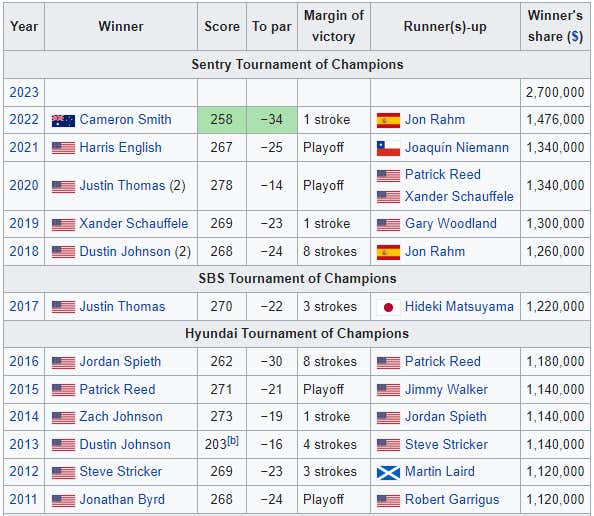 As I mentioned before, Kapalua is one of the most picturesque golf courses on the planet. I'll let this drone footage do my talking for me.

As the video shows, the course is pretty spacious with a lot of room for error off the tee. In fact, this course has more fairways hit than any on Tour. It's a resort course after all. That's a recipe for all those low scores over the years, as evidenced by numerous scores better than -30 over recent years.. There's definitely hilly terrain which can make for some uneven lies, but otherwise this course is largely harmless. As for the scorecard itself, it's actually the Tour's only par 73 course with three par 3's and four par 5's measuring close to 7,600 yards. We're looking at a ton of drivers and wedges here folks. 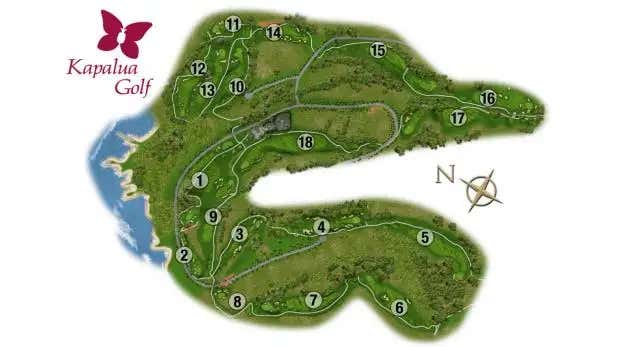 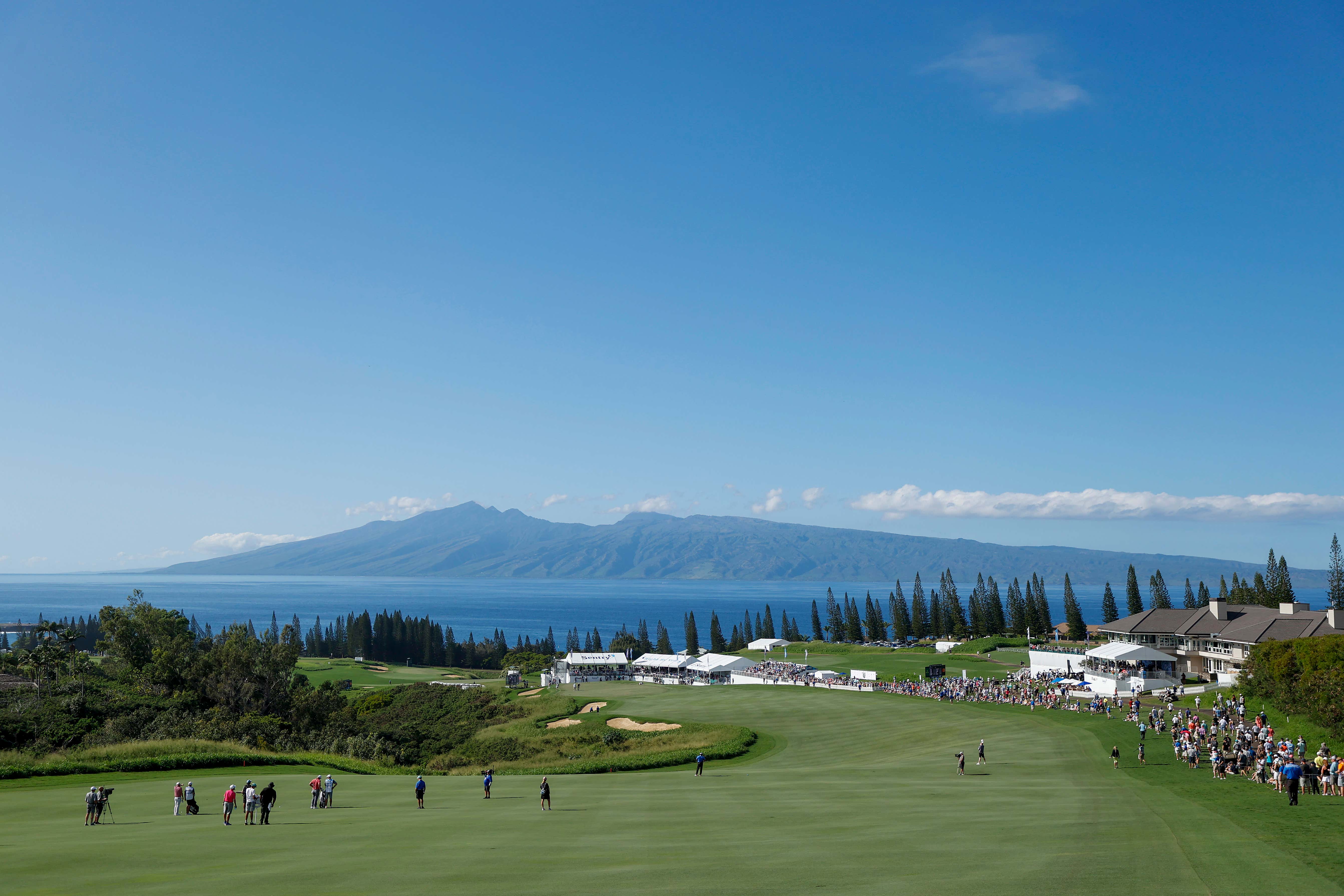 What an absolute beast of a hole. 677 yards is obviously a truckload, but it probably plays closer to 600 due to how steep the it runs downhill. It's reachable in two if you're feeling gutsy and trust yourself to work the ball right to left and run it onto the green. Great hole to give yourself an opportunity down the stretch, which we see year after year. 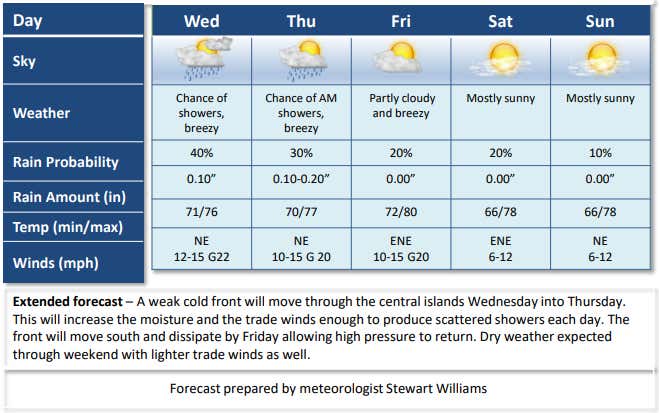 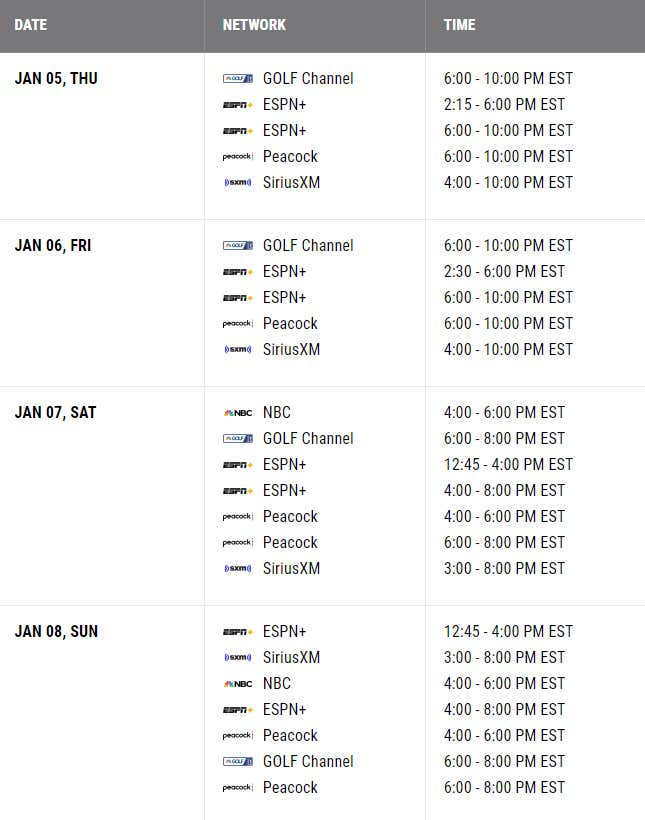 Little bit of showers in the mix early to soften up the course, and then gorgeous Maui weather the rest of the way. The wind will be there, but nothing too crazy. Another formula for low scores.

And primetime golf! Love the Hawaii Swing for this. Nothing like coming home from the office and having live golf on the tube. That and the Sunday finale will wrap up right around that awkward window between the late afternoon NFL games and SNF. Great mix for the casuals.

Couple of SICK Tiger highlights here, the first being an epic duel with the Big Easy, and the 2nd being an absurd uphill Driver off the deck on the par 5 9th. 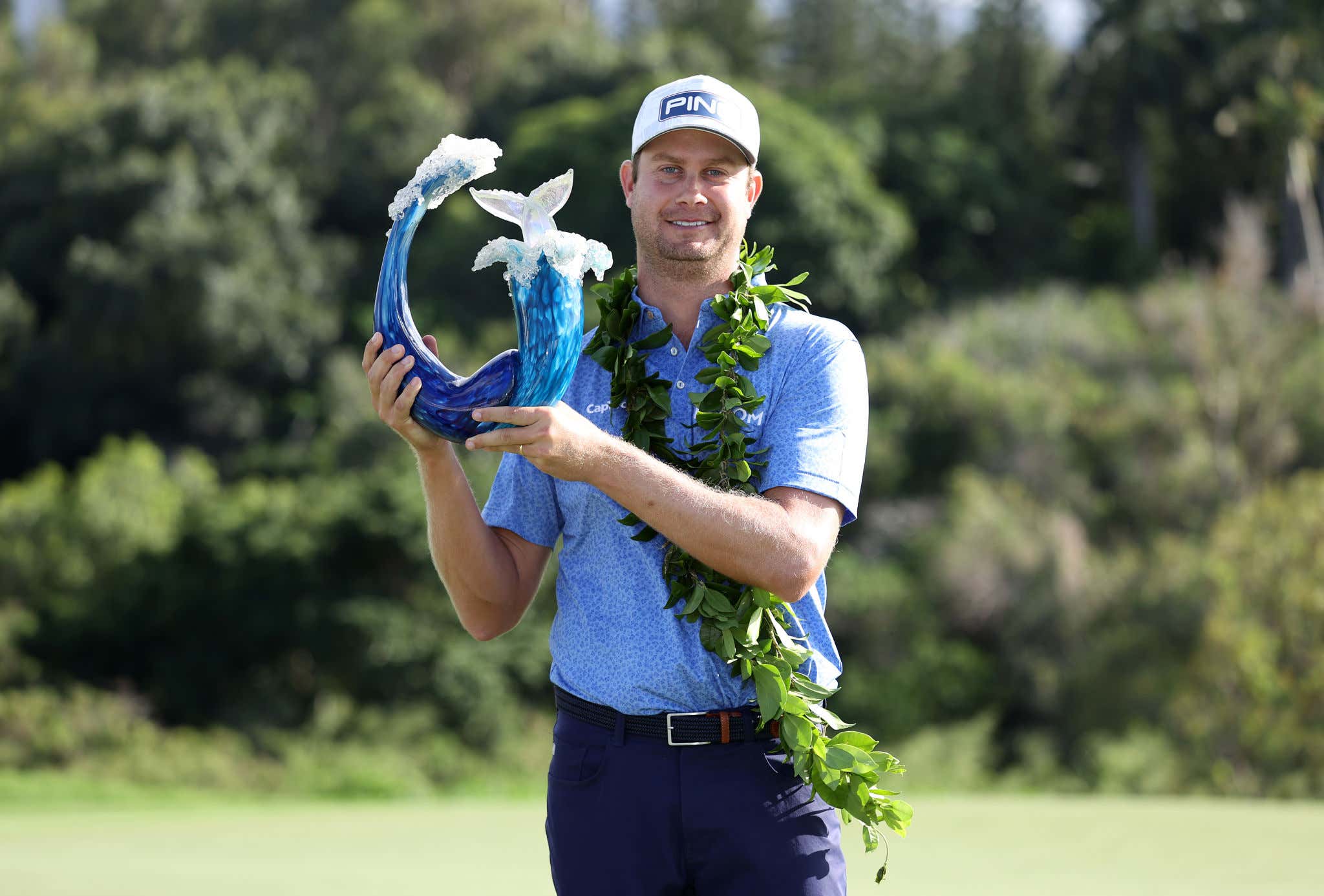 It's… just a dolphin looking thing? Hey I'm on record as saying I'm all for the weird looking trophies on Tour. Leave the traditional looking trophies and jugs to the Open Championships of the world and put a little pizzazz on your tournament. With that said, this trophy leaves a lot to be desired. It looks like something a housewife puts on a beach house glass coffee table, or a Dratini for those in the younger crowd. I guess I can't completely bash it given that I love the chameleon at the Mayakoba (that some others hated) and the lei is a nice touch but I simply cannot justify giving this more than a 4/10. 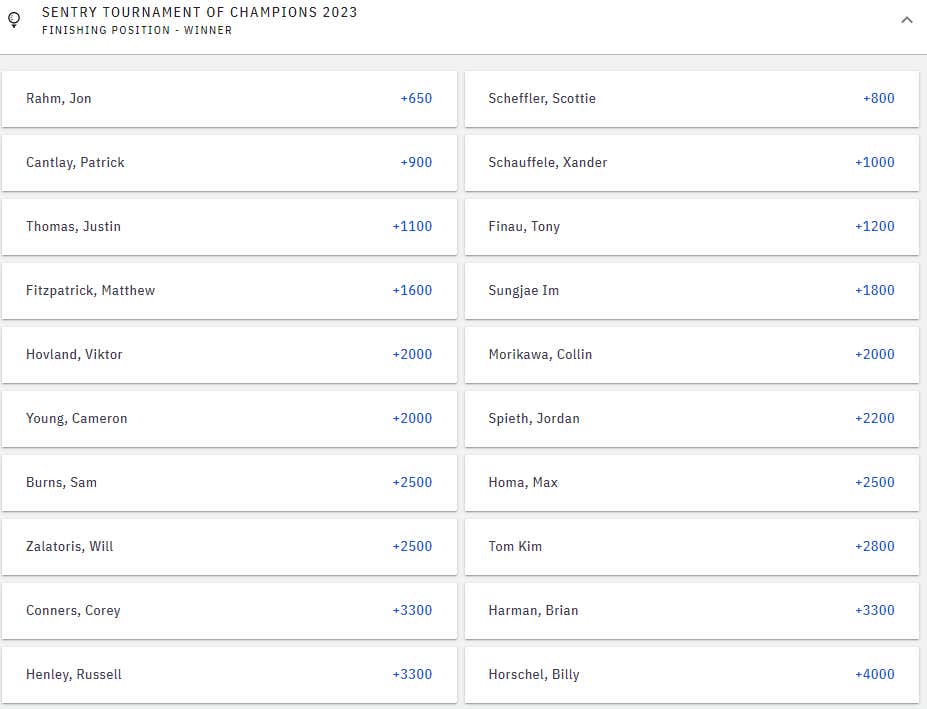 Jon Rahm is at the top of the board this year at +650 at the Barstool Sportsbook. The current world #5 had a "down" year in 2022 (only 3 worldwide wins) and was supplanted from his spot at the top of the rankings by Scottie Scheffler and subsequently Rory, but I think everyone would consider Rahm the superior player to Scheffler and a dangerous man coming into 2023.

Xander Schauffele (winner in 2019 with a Sunday 62) has some good history here and is +1000, but he also seems to be dealing with an injury and WD'd from the Wednesday pro-am. Something to monitor as the tournament start approaches.

I think Justin Thomas is a bit undervalued here at +1100. He's my pick. He's done nothing to suggest he isn't at least in the ballpark of Rahm in terms of ability and he's far more accomplished than the other 3 players ahead of him on the board. He's won here twice before and was actually the favorite for last year's event before finishing T-5 at -25… which is a lower score than the two times he's won. 2022 wasn't his best year (despite winning the PGA) but I just don't see much evidence as to why he's +1100 vs the +750 he was last year against a field that included guys now on LIV. We don't have much recent form to go off of with anybody, so handicapping this event is very much an exercise of just closing your eyes and going off pure talent. JT has that type of talent and he's shown it here before. So roll with JT and ask questions later.

Viktor Hovland To Win +2000/Top 10 +138 - As a guy who's thrived on resort courses in the past, this tournament screams the Hov. But he's also put out a couple of mediocre performances here, finishing 30th and 31st in his two efforts. I'm baffled. I've expected a breakthrough year from him the past couple years and he's somewhat plateaued, mostly hovering around that 10th in the world spot. Maybe this is the week. Maybe this is the year.

Hideki Matsuyama To Win +4000/Top 10 +225 - Another guy who had a "down year" in 2022, but this tournament is such a reset button. I like the angle of talented, accomplished guys motivated for bounceback years in this spot. Finished T-13 here last year and then won the Sony, which is a wildly different course but we've seen guys win both in the past. Hawaii vibes gotta be worth something, right?

Jordan Spieth Top American +2000/Top 4 American +500 - He's +2200 to win the tournament, and you only shave off a tiny bit of value to take Rahm, Hovland, Fitzpatrick, Sungjae, Kim, Matsuyama, and a handful of other international guys out of the equation.

Matt Fitzpatrick Eagle In Round 1 +350 - He's being handicapped at +350 with a bunch of shorter hitters, but that Matty Fitz can't come to the phone right now. Guy hits bombs now and should be in the +275/+300 range with some of the big guns.

Winner to Birdie 72nd hole -150 - The 18th hole was played 152 times by the field last year, yielding 6 eagles, 85 birdies, 51 pars, 9 bogeys, and 1 double. That's a 56% birdie clip, which is below the implied probability of 60% at -150… but you also gotta figure by definition your winner isn't exactly your tournament average player and is playing great golf. Plus it's just great action to have at the end in case all your other bets have gone south, which they probably have.

That's all I got. Enjoy Kapalua. And by the way, D-Rap is boots on the ground, he's got plenty for ya in case ya missed it this morning.