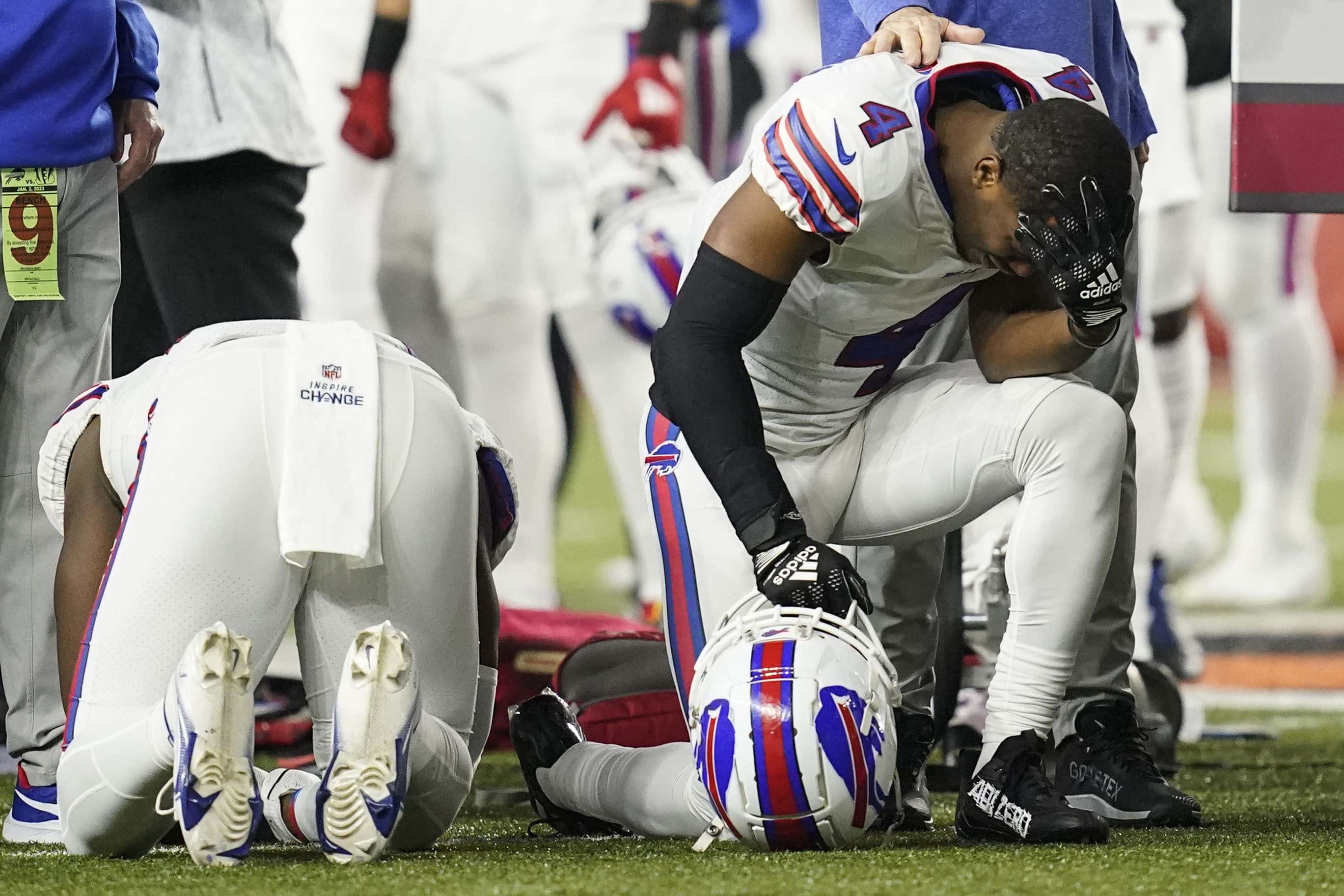 Last night, as it became clear that the injury to Damar Hamlin was much more serious than perhaps any injury we've ever seen in football, I was struck by a few things. Specifically, the way the atmosphere changed on both sidelines, and how these warriors were immediately shaken from a level of focus few of us have ever sniffed, and rendered completely, emotionally uninterested in continuing to play football.

Of course that's how it should be. But it's still a wild phenomenon to witness. We're so accustomed to seeing NFL players push the boundaries of their bodies, play through pain, take insane hits and bounce back up. So many plays end with a train wreck of human bodies, and yet 40 seconds later, they're all in a line, ready to go again. As fans, we become numb to it. We expect the play to continue. Even a player sitting on the turf, requiring help off the field, is so quickly replaced by the "next man up" that beats are not missed and the game rolls on without so much as a commercial break.

But clearly, things were different last night. Joe Buck told us they were trying to resume the game. At one point, they showed an angle of Stefon Diggs trying to rally his teammates. I'm sure he evoked a stirring message about needing to play for Damar, let's go win this one for Demar. But then the camera showed Josh Allen's face, and the fire was gone. Guy was in a total fog. That's when the silence and weirdness really hit home.

If you've ever been on the field when a teammate endures a serious injury, you might know the disorienting, power-ending effect it can have. These guys spend the entire week leading up to the game preparing themselves mentally. The day of the game, they stretch, tape up ankles, strap on their helmets and armor and listen to music to get in a headspace to run through a fucking wall. I'm the fucking man. I'm going to go out there and do what I want. Nobody can touch me. This will be war, but I'm invincible.

So, when you see someone wearing the same equipment that you're wearing, playing the same game at the same speed on the same field, collapse and require CPR, defibrillation, and an ambulance? It punctures all the lies you told yourself. Immediately, you are reminded of the danger of the game, how vulnerable you are, your own mortality. One wrong hit and my heart can stop. And all the protective pads and helmets feel part of the lie.

Watching a teammate or opponent get truly injured is like someone opening the door of the space shuttle and all the light, energy, noise, and life is sucked out into the black. Personally, I've never experienced another phenomenon in life where some unseen switch is flipped that changes the moment, the momentum, and the energy so completely. Where, seconds before, the world was heading in one direction. You were convinced of your purpose and prepared for the pain that accompanies such a violent hour of life. But WHOOSH, now we're in a vacuum and you have no fucking idea why you're standing on the field anymore, or why you cared so much about winning or scoring.

The closest I've experienced to this was in a lacrosse game at 18 when, two minutes into the game, a defenseman fell on the leg of my teammate. His leg snapped. He sat on the ground as the play continued around him—bodies bumping into each other, ground ball mayhem, chaos. He started yelling, "stop, Stop, STOP! MY leg. I've broken it. I've broken my leg!" I think someone on the other team saw it first, ran to the ref, and told him. Then they stopped play and we all went to check on our guy. But when we saw his leg, we peeled away FAST. We're not doctors; we're not equipped to stomach something that grisly.

They called an ambulance, which came and took him away. He was brave and accepted our back pats and fist bumps and told us he'd be fine, go win the game. But when we tried to warm up again? Remembering that we had about 97% of the game left to play? Nobody wanted anywhere near that cursed field. We got smoked.

Obviously, Demar Hamlin's injury was far scarier than a broken leg. Watching a teammate receive CPR on the field has to be one of the most terrifying things to witness on the gridiron. But I suppose I was struck by how, even at the highest level of the sport, the power went out of these giants. We expect these guys to be terminators. Stay the course, the game must go on, next man up, one more yard. Yet last night, fear, empathy, love for a teammate… basically, humanity flooded in and shut down the whole system.

It was a deeply humbling scene to witness. I hope to God Demar Hamlin comes through this.