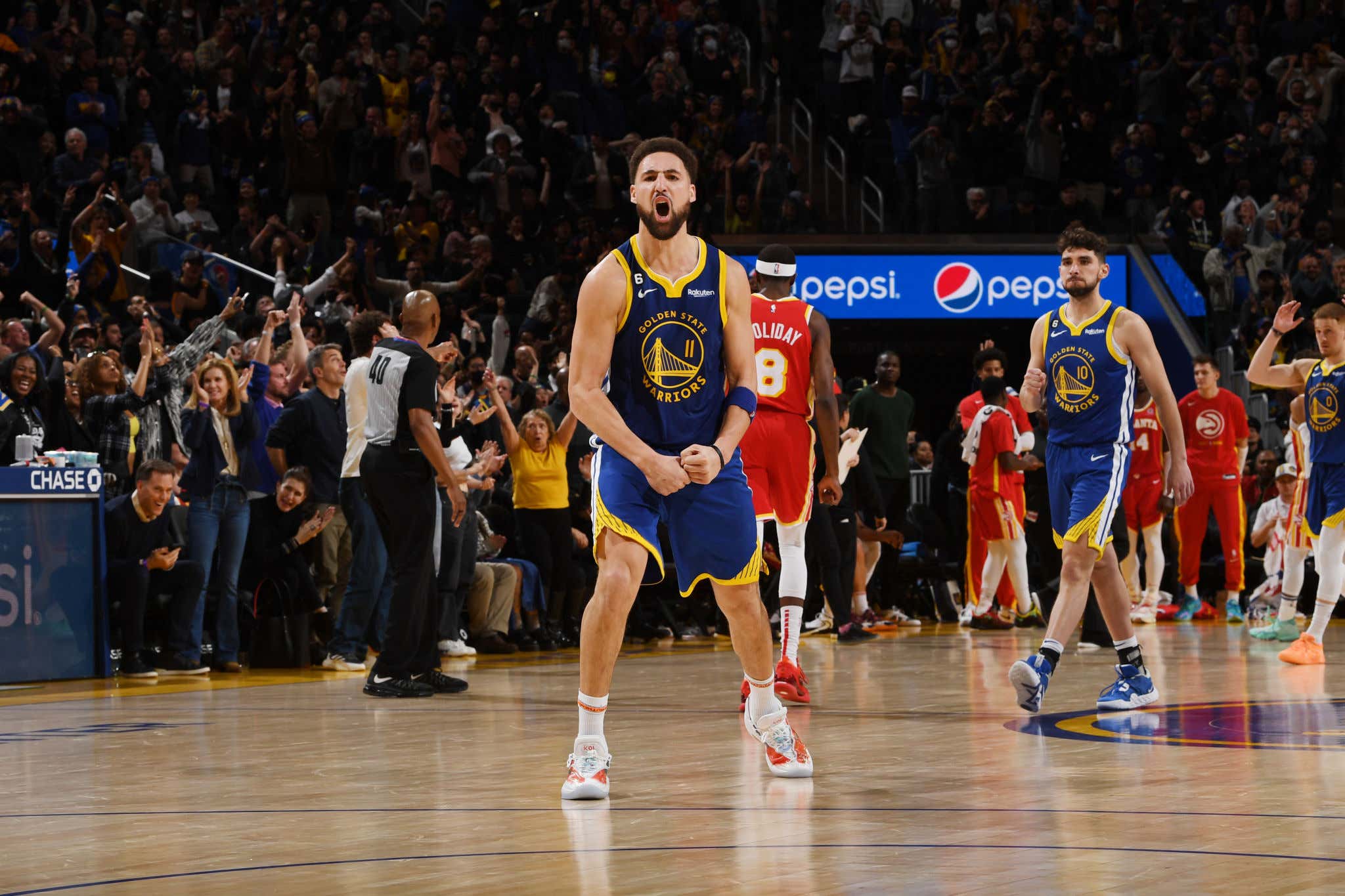 It's still a little tough to process everything that went on last night in the sports world. Damar Hamlin’s injury, Donovan Mitchell going for 71, it was a night where sports didn't really matter despite some absolutely ridiculous stuff taking place (as it should be). For example, take the night of Klay Thompson. Given everything Klay's gone through these last few years, a night like this is a pretty big deal

I know I'm supposed to despise the Warriors given what they did to me this past June, but when it comes to Klay I can't really bring myself to do it. After going through what had to be absolute hell, I think it's very cool that he's back to being the same old Klay. It was cool to see him win a title even if it ruined my life. It's cool to see him have nights like this when nobody knew what type of player he would be once he eventually came back from two brutal injuries

It's wild that a 54 bomb like this is basically an afterthought given everything that went down Monday night, but that just goes to show what a crazy night it was. This would normally be a pretty huge deal on any other night, because what we saw from Mitchell and Klay was pretty freaking rare

We hadn't seen a night like last night in the NBA since 1978! For those who may be unaware, it's currently 2023. It wouldn't shock me at all if we went another 45 years until we see that shit again.

I won't blame you if you've sort of checked out on the Warriors since Steph went out a few weeks ago, but anyone out there that suggested the defending champs were cooked because of their slow start may want to start deleting those tweets/takes.

Well, the Warriors have now currently won 5 straight to bring their record to 20-18. That might seem shitty to some, but then you remember Steph has been out since 12/14. Over that span, the Warriors have somehow survived and played .600 basketball. Part of that is Klay looking like Klay, part of that is also Jordan Poole stepping up big time as a starter, and now when you look at how the West is stacked up, things suddenly don't look so bad for GS with Steph's return on the horizon.

As of today, they sit in the 9th spot, which is bad. However, they're only 0.5 games behind the Kings for the 5th spot. Even with the Mavs riding a 7 game winning streak of their own, they sit only 2 games ahead of GS for a top 4 seed. Yes, it's true that GS is the only team in the top 10 seeds out West with a negative point differential on the season, but they are very much alive in what is going to be a battle the entire year in this conference.

This is all possible because GS has found a way to be 17-2 at home, which is tied for CLE with the most home wins in the NBA. Their issue is once they hit the road they are utter dogshit, posting a 3-16 record. This was also the case even when Steph was playing, and it's very weird. You could make the argument that for this season, finding a way to snag homecourt in a playoff series is pretty crucial for this version of the Warriors, and the fact that at the midway point of the season that's still possible despite that 3-16 record. You know what type of teams are 3-16 on the road?

Nobody in the league has been worse. Teams like HOU are 4-15, ORL is 4-13, there are teams like the Pistons who are 5-17 and the Hornets at 5-15. The thing with all those teams is they're destined for the Lottery whereas the Warriors are still in the conversation for homecourt. That's bananas.

It's also bad news for the rest of us. This team just won't fucking die. With Steph, without Steph, enough already. I've had it up to my eyeballs with these goddamn Warriors. They are one of the few teams where I don't even think their regular season matters as long as they're healthy come the playoffs. I've seen what Steph Curry can do and I am still recovering from what that healthy core does once they get into a playoff series. If you're telling me they're also going to be able to unleash Vintage Klay, well then what the hell.

That's what has me so conflicted. As someone who loves seeing Klay look like this, I also hate what it means in terms of the Warriors dominance. How many teams in the West are you confident putting over a healthy GS? The list can't be more than 2 or 3