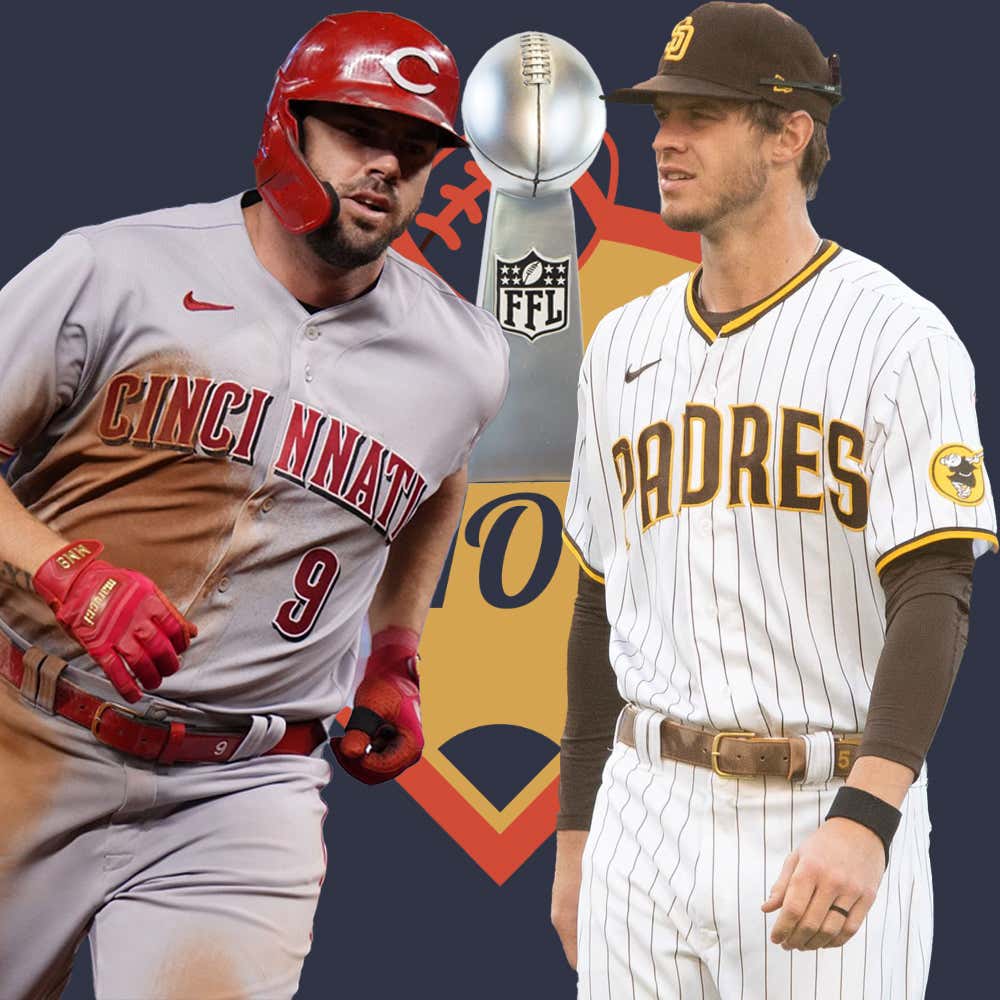 It's Championship Week in fantasy football leagues across the world and we've got a doozy in The Show with #2 seed and overall points leader, Mike Moustakas taking on #1 seed Wil Myers who was dominant all year. 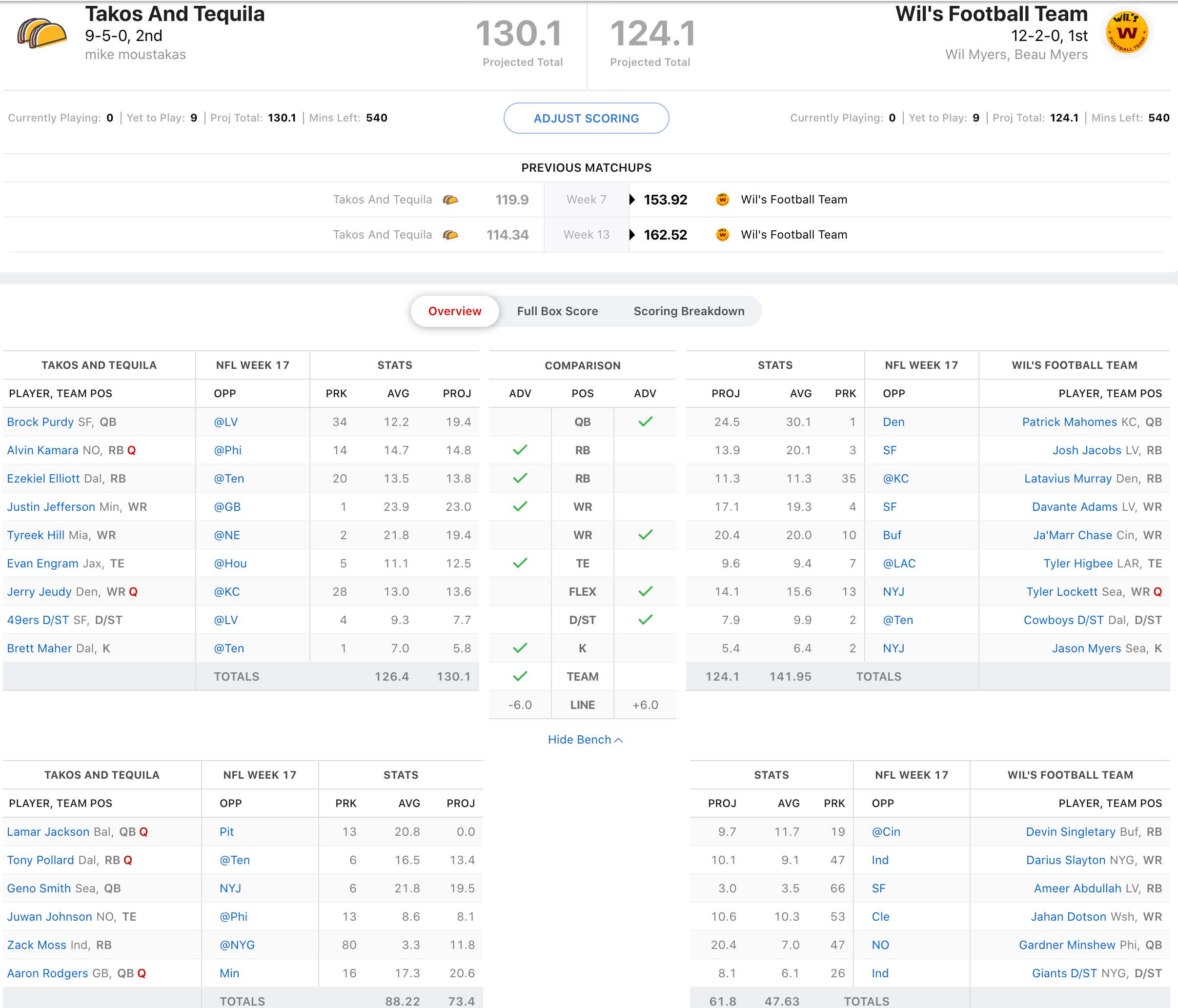 Moose is favored by 6.0 points in spite of the fact that his QB1, Lamar Jackson along with his most explosive RB, Tony Pollard are both on the bench. Jackson is currently questionable, but the night slot against Pittsburgh make his status difficult. I'd definitely give the nod to Myers there as Mahomes gets a Broncos defense that seems to have quit and gave up a huge game to Baker Mayfield last week. With this being a 6-point passing TD league, Wil needs a huge game out of Mahomes.

RBs is a bit of a toss up as Latavius Murray has strung together some decent games, but I think Tony Pollard's absence actually helps Zeke Elliott managers a lot tonight. They can now rely on him to be the bellcow. Alvin Kamara should also see a lot more of Taysom Hill which could help create more TD opportunities. Meanwhile, Wil gets Josh Jacobs going against the league's top defense in the 49ers.

Davante Adams has that same burden, so Wil will certainly need a big game out of Ja'Marr Chase on Monday Night, but Chase has a habit of shining bright when the lights are the brightest. But Moose trots out two home run hitters in Justin Jefferson and Tyreek Hill, so I'll give the nod to his WR corps.

At TE, Evan Engram has been hot, but Tyler Higbee is coming off a solid performance, I'd give the slight nod to Moose here. I'd also take Jerry Jeudy over a Tyler Lockett that may not be ready coming off an injury to be at 100%.

I do very much prefer the Cowboys this week as a D/ST vs. Josh Dobbs and the Titans tonight who will be without Derrick Henry opposed to the 49ers taking on Jarrett Stidham and the Raiders. Kicker are kind of a wash and I think this will be a close matchup.

Wil has beaten Moose in both their matchups this year by an average of 41.10 points, but it's hard to beat a team three times.

Meanwhile in the battle for 3rd place, can Mike Napoli pull off win #3 of the season vs. Jake Marisnick? 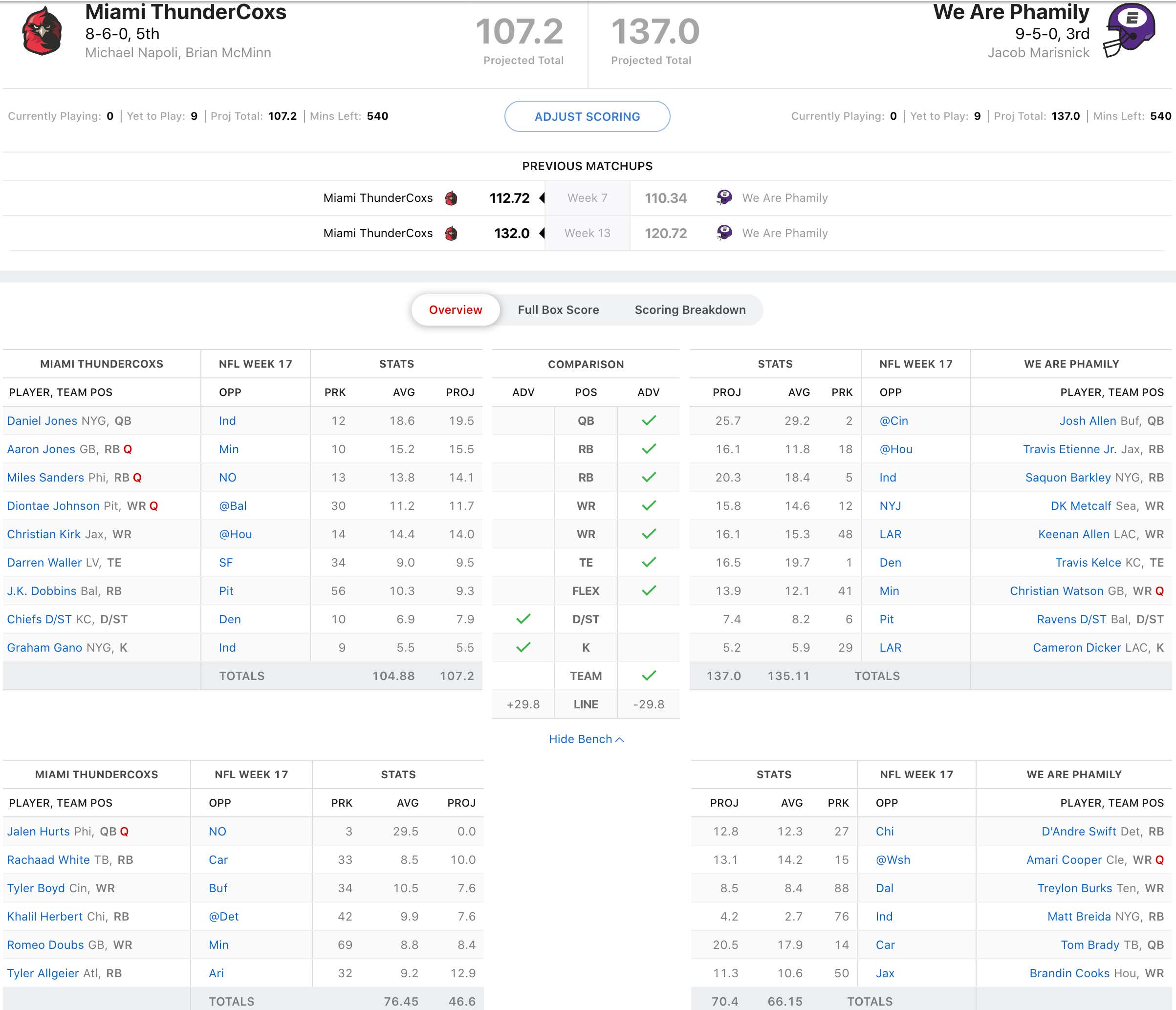 The Bengals defense is playing really well, but it's hard not to like Josh Allen over Daniel Jones. Marisnick's RBs are so much more versatile too with Travis Etienne Jr. and Saquon Barkley as fully do-it-all backs. AT WR, DK Metcalf and Keenan Allen in a PPR league are really valuable weapons. He's also got Travis Kelce who I'd take all day over Darren Waller. At FLEX, Marisnick has Christian Watson who has been so hot as of late vs. JK Dobbins who can run hot and cold. I do think Napoli has the advantage at D/ST with the Chiefs vs. the Broncos though. If Jalen Hurts plays, it doesn't change my vote.