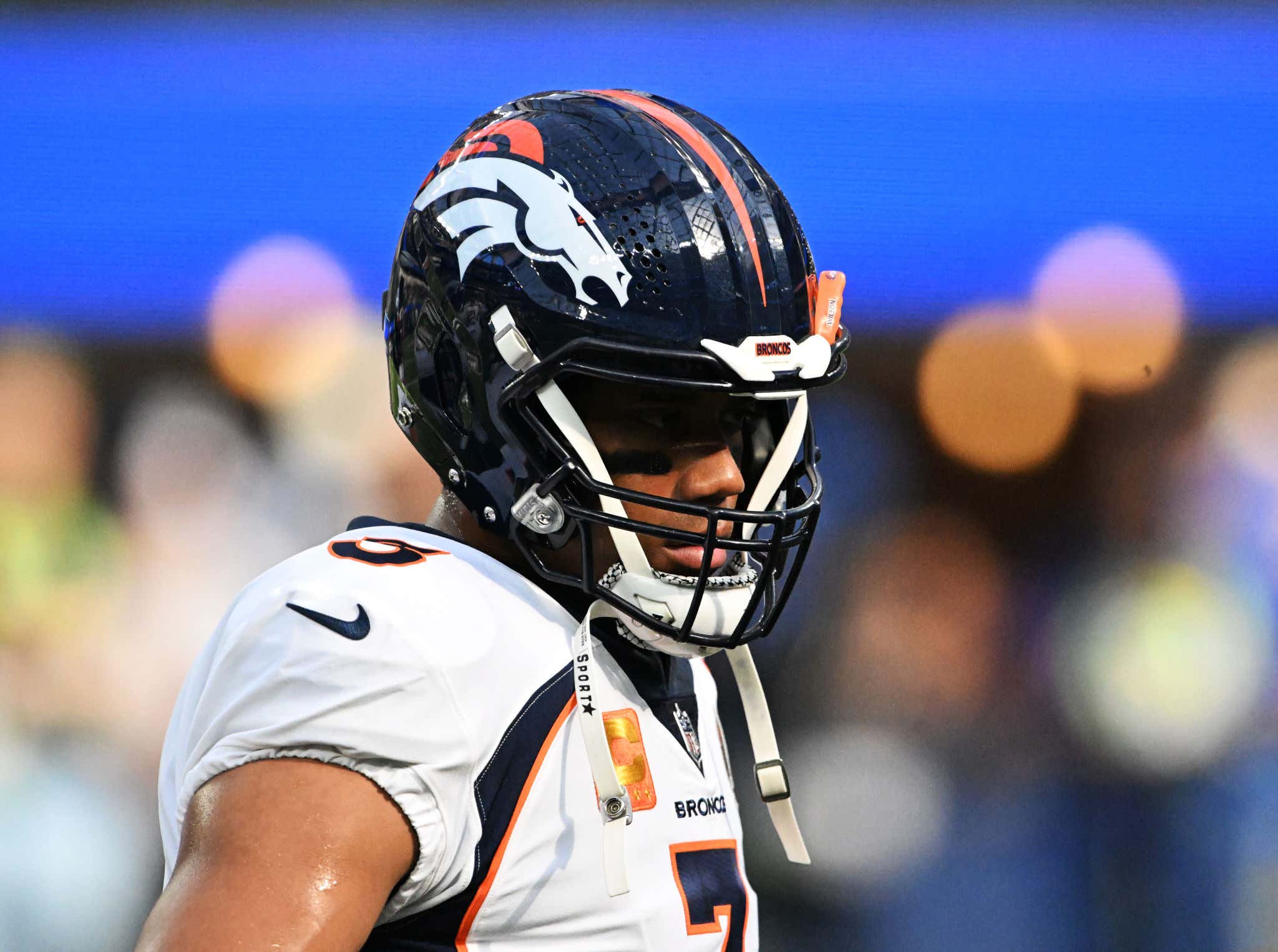 The Denver Broncos made what looks to be one of the worst trades in NFL history for Russell Wilson and compounded the mistake by rewarding him with an exorbitant, seemingly inescapable contract. Basically every take I've seen about the situation is some iteration of, "OMG THE BRONCOS ARE FUUUUUUUCKED" because they're stuck with Wilson, whose contract runs through 2028.

Cue the 30 for 30 voiceover voice. I thought it was Michael Smith but it totally isn't. Is that some sort of Mandela Effect or am I just a moron for believing it was him all these years? Anyway…whoever's unmistakeable vox it is…

"What if I told you the Broncos could move on from Russell Wilson five years before his contract expires, tank one season, and radically turn around their franchise sooner than anyone could imagine?"

Denver can absolutely do this. Wanna know how? Let's start with that albatross of a contract. If Russ is cut with a post-June 1 designation at the start of the league year in 2024, the remainder of his contract plays out as follows:

The post-June 1 designation is key. Denver can let Russ go before then, but have to effectively cary his salary cap until after that date. It's a weird league rule thing. If they release him before that? Forget about it. Total disaster.

There may be some technicalities or whatever that I'm not accounting for, but I think these are generally the right numbers. And that's with the understanding that Wilson's salary for 2025 is guaranteed even with the post-June 1 release designation in 2024. Nothing Denver can do about Wilson's 2024 salary, which was guaranteed upon his signing the deal. 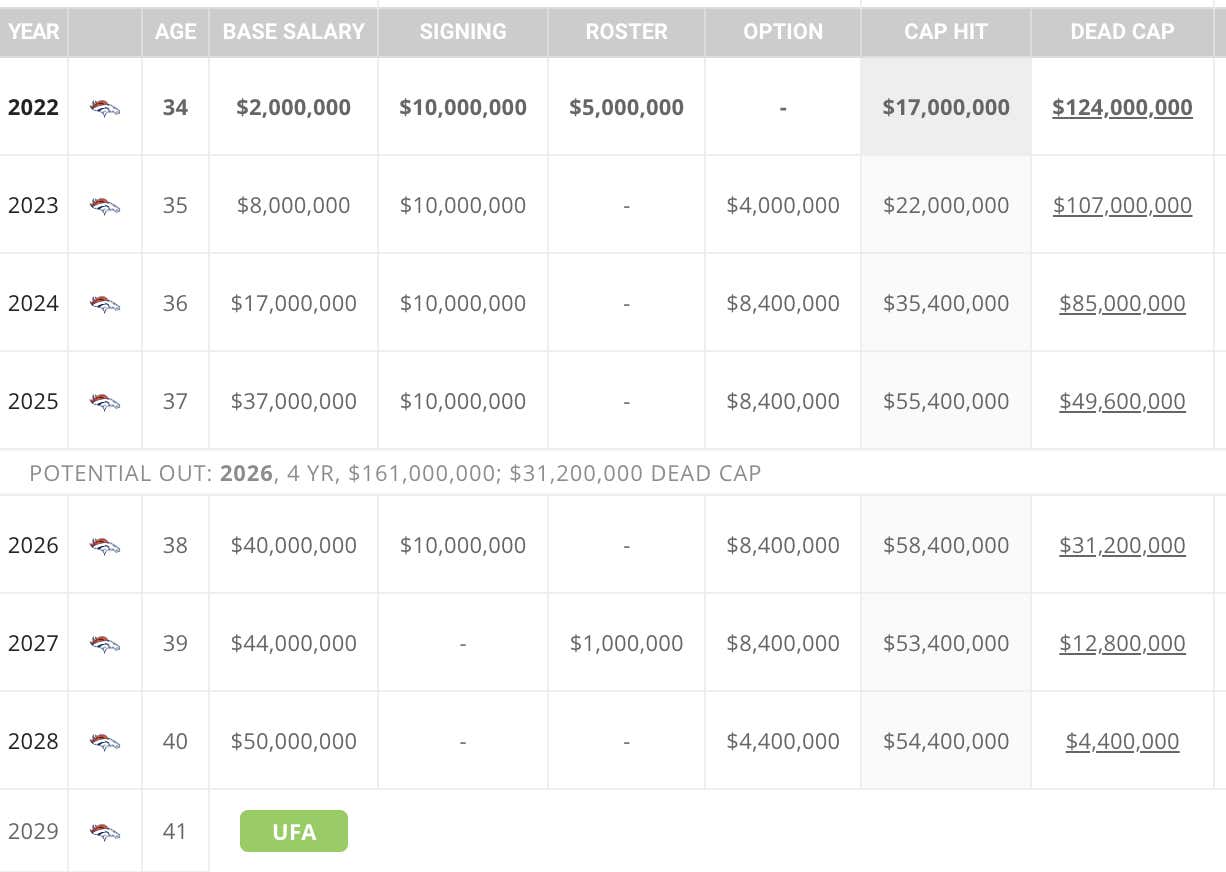 I've mentioned this in several blogs prior, but the NFL's new TV/media rights deals kick in beginning in 2023. The salary cap is going to explode in the coming years as a result of the league pretty much doubling its media revenue.

You can see that by cutting bait with Mr. Unlimited post-June 1, 2024, the Broncos would still need to shell out $98 million for four years. They're paying Wilson that much money not to play for them despite how much they gave up for him. That ain't chump change. Also isn't as devastating when you put it in the context of the greater media revenue pie teams will be splitting, not to mention Denver's ownership. More on them in a minute.

NFL front offices too often make the mistake of doubling down on a clear mistake. GM George Paton seems like a smart guy and is well-respected around the league. Between hiring less-than-one-and-done Nathaniel Hackett and swinging for the fences on Wilson, all the goodwill he built up with any prior moves is gone. At least he seems self-aware enough to recognize that.

You understand, of course, Paton has to say this for now:

As long as Russell Wilson is the quarterback, no quality coach in their right mind is going to walk through that door in the Mile High City. You can pretty much kiss any hopes of landing Sean Payton goodbye. Their blowout loss to the Rams on Christmas Day notwithstanding, everyone knows the problem in Denver isn't with the defense. Thus, it makes little sense to hire a defensive head coach.

With the out available in Wilson's contract that I've just outlined, though, the job becomes all the more appealing when you think about how solid the roster is on the defensive side, and the fact that the Broncos are under new ownership who just paid $4.65 billion for the team. The heirs to the Walmart fortune will spare no expense to land the best possible coach. They had the wherewithal to shitcan Hackett very early, so I figure they're more focused on big-picture, long-term success than eating some money in the short term.

That not only applies to the whole Wilson fiasco, but it might also mean a full-on tank job in 2023.

The golden ticket in the 2024 NFL Draft

I'm a big NFL Draft guy and like to think I can evaluate quarterbacks pretty well. I've had plenty of misses, but some pretty good hits too. Sadly I was in graduate school and not writing on public record at the time when I called out Patrick Mahomes as a surefire superstar. Ask any of my friends or family — it's true! He was my second-favorite QB prospect ever behind Trevor Lawrence.

You know who I'd already put up there with those two guys? USC Heisman Trophy winner Caleb Williams. Acknowledging how much of a jinx this could wind up being, I'm pretty confident Williams will be a franchise QB in the NFL and the No. 1 overall pick in the 2024 draft. More on him here:

All the Broncos need to do is look at their own AFC West division to realize Wilson ain't it, and anyone they can possibly sign or trade for won't come close to matching the likes of Kansas City's Mahomes or Chargers young stud Justin Herbert. To compete with those teams year in and year out, Denver needs to do everything in their power to land someone like Caleb Williams.

While North Carolina's Drake Maye, Oregon signal-caller Bo Nix and even Texas' Quinn Ewers could emerge as strong prospects in 2024 given their considerable innate talents, I can't come close to endorsing any of them as much as Williams at this point. There's about a 10% chance Maye eclipses Williams as the top prospect. Not like Maye is a slouch, by the way:

So yeah…the Broncos need to try to tank for Caleb Williams, with Drake Maye as a potential consolation prize I guess. I know this isn't a foolproof strategy, but look at the current draft order for 2023:

Houston, Indianapolis, Atlanta and Carolina will be in the market for QBs this offseason and are liable to reach for one or fall in love with somebody during the pre-draft process. Bryce Young, Will Levis and CJ Stroud are viewed as consensus first-rounders. Those organizations face immense pressure to find a new face of the franchise. I'd be stunned if any of them made it out of the top 10. Whether they deserve to be drafted that high or not is another matter.

The Bears have Justin Fields. Seattle should roll with Geno Smith and rebuild their defense. Same goes for Detroit and Jared Goff. Eight of the Raiders' nine losses in 2022 have come by one possession, so who knows what Derek Carr's future holds. They might give him the benefit of the doubt for one more year.

All that to say: name me a bad, QB-needy team outside of that group of nine teams who's in better position to tank than the Broncos in 2023. You probably can't.

Williams is getting compared to the likes of Mahomes and Josh Allen. Not for nothing, either: Sean Payton himself acknowledged how many teams may race to the bottom for the USC signal-caller next year:

Think about this from a new Broncos coach's perspective. There's an internal understanding in the organization that your first year is going to suck. If you can keep the team somewhat competitive, or even help Russell Wilson improve a little, you'll be applauded by the national media and the fan base. Then, you get a legit chance to select Caleb Williams. WOOOOO.

George Paton needs to sell the shit out of this strategy. He botched everything with Hackett and Wilson, yet if he can get the right coach in place, kick Wilson to the curb with a post-June 1 designation, and sell ownership and his new coach on bottoming out for Caleb Williams (or, er, Drake Maye), the proud Broncos franchise will be back to glory in no time. Or, you know, the Broncos may just give Paton the pink slip after next season anyway. Doesn't really matter. You don't need a big brain to draft Caleb Williams.

You might argue it's too big of an "if" to bank on a season going badly enough for Denver to have the privilege of bringing Williams aboard. Welp, any plan to rebuild the Broncos on the fly is going to have flaws. I happen to think this one is a pretty good starting point.