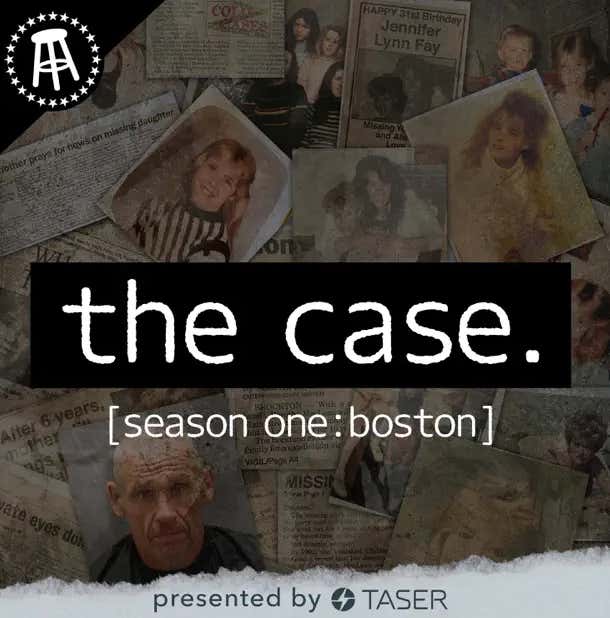 Yes, yes, here’s where I put in the caveat that everyone in America is innocent until proven guilty in a court of law by a jury of their peers, blah, blah, blah…

But it appears Kirk Minihane solved a murder.

Why’s that significant: Craig’s death had previously been ruled accidental, but the case was reopened following information reported exclusively in The Case, Season One. Kevin Maler was featured prominently in the podcast and Oconee County Sheriff Mike Crenshaw credited the podcast for its help in investigating Craig’s death.

Let’s go: The story begins in February of 1989 in Brockton, Massachusetts. Sixteen-year-old Jennifer Lynn Fay goes out for a night of partying with friends around her neighborhood. Later that night, she disappears and is never seen again.

For three decades, her family, local law enforcement, and volunteer private investigators explore every avenue and lead to find out what happened to Jennifer. Eventually they conclude Jennifer is, most likely, dead.

Her remains have never been found.

In 2019, Kirk Minihane discovered Jennifer Fay’s case and decided to investigate her disappearance as part of Barstool Sports’ first-ever cold case podcast: The Case, Season One.

Minihane’s investigation recreated the night Jennifer went missing and determined that she was likely partying and doing cocaine with a young man named Kevin Maler. Indeed, it was possible that Kevin Maler was the last person seen with Jennifer that night.

So we tracked Kevin Maler down to his daughter’s trailer in Walhalla, South Carolina, a little north of Clemson. We knew going in that Maler had a long criminal record: possession of methamphetamine, assault, possession of a firearm by a violent felon. He’d been in and out of jail a handful of times. But right now, he was out, and when we knocked on his door, we met a subdued, meek, possibly hungover Kevin Maler who insisted that he knew nothing about Jennifer Fay.

But our time in South Carolina also revealed that Walhalla was beset with crime, mostly drug-related, and that three people in Maler’s social circle had very recently gone missing or been found dead under mysterious circumstances.

In the first three months of 2019, April Norton jones was found dead in her garage under bizarre circumstances (which we detailed in Episode Four of The Case); Faith Roach went missing (Episode Two) and Kevin Craig was found dead, barricaded in his own trailer. All three of them were connected through the drug scene to Kevin Maler, who was, by his own admission, a small-time drug dealer and addict.

We talked with the families of all three and visited the locations where Jones and Craig had been found dead. Although law enforcement had ruled that Jones and Craig’s deaths were accidental, the facts on the ground did not add up. The circumstances of their deaths were just too bizarre to be brushed aside as accidental after a 24-hour investigation.

In Kevin Craig’s case, he was found dead in his own trailer, barricaded in his room, locked from the inside. Several days of rot had set in when he was discovered and lying next to him was an empty hypodermic needle. Craig was a drug user, his drug of choice meth, and it appeared like an open-and-shut case of an overdose, all too common in Oconee County. However, Oconee County Coroner Karl Addis toxicology investigation determined that there were NO drugs in Craig’s system at his time of death. Zip. None. So why the syringe? More on that later.

Early in the investigation, Minihane had been told by a family member of Craig’s that the rumor around town was Kevin Maler killed Kevin Craig as part of an attempt to cover-up whatever happened to Faith Roach. Maler was, according to this theory, somehow involved in Roach’s death and then enlisted Craig to help cover up the fact by disposing of her body.

The big break in the investigation came when a source close to Kevin Craig revealed to Minihane that Craig had been distraught in his final days. Craig was, the source said, beside himself with guilty and anxiety over his role in covering up Roach’s death. The source told us she only told one other person that Kevin Craig was feeling guilty, perhaps guilty enough to confess to law enforcement. That person was Craig’s best friend and sometimes drug-dealer, Kevin Maler.

That, dear reader, is called motive.

According to Minihane’s theory, Maler, knowing that Craig potentially was about to implicate him in Roach’s death, would have had the motive to prevent him from doing so. We had heard reports of Maler, again: drug dealer, administering “hot shots” (aka bad drugs) to his enemies. And we knew he sometimes supplied Craig with drugs, which provided the perfect opening for him to offer Craig a free shot of the Kavorkian special while claiming it was methamphetamine. Craig would have no reason to suspect his friend had lethal intent.

But, you might ask, didn’t Oconee County Coroner Karl Addis conclude that there were no drugs in Kevin Craig’s system when he died? Yes, he did. And here’s where Sheriff Mike Crenshaw helped us fill in the missing piece of the investigation.

As Season One was about to conclude, Crenshaw called us with tip. His men had heard, but could not confirm, that Maler used INSULIN, rather than a toxic drug concoction, to kill Kevin Craig. As we would learn, insulin would be literally the perfect way to murder a known drug user without ever being discovered.

The half-life of insulin in the body is so short, that it would almost certainly decay rapidly before an investigation could discover elevated levels. It’s also present naturally in all humans, so determining whether it came from a syringe, or a pancreas, would be nigh impossible. And lastly: Testing for insulin is not part of any standard operating procedure for suspicious deaths.

That explains why, in part, Craig’s cause of death went undiscovered. It explains why there was an empty needle next to his body and no drugs in his system. If the theory is correct, that means Maler went to Craig, offered him some “drugs”, shot him full of insulin, and then staged an accidental death around him after he became unconscious. Eyewitnesses place Maler at the Craig trailer multiple times in the days surrounding his death, so this timeline of events is entirely plausible.

Finally, but importantly, the Kevin Maler would only have a reason to kill Kevin Craig IF he was also involved in the disappearance of Faith Roach. Which means his murder charge today could be pointing toward an answer to the Roach’s unsolved case. As for the cases of April Jones and Jennifer Fay, time will tell whether today’s developments shed any new light on those cold cases.

But one thing is for certain: A dangerous predator with a history of using drugs to coerce and harm young women is off the streets for a little longer, and hopefully forever, and the families of the deceased may be closer to finding closure, and peace.

Go listen to all eight episodes of The Case podcast right now: