Sun Times - A body pulled from Diversey Harbor on the North Side on Tuesday was identified as Peter Salvino, a Northwestern University student who had been reported missing, according to the Cook County medical examiner’s office.

About 5:15 p.m., the remains of a male were found in the 2400 block of North Cannon Drive by members of the marine unit responding to a report of a missing person in the area, Chicago police said.

Salvino, a 25-year-old Northwestern University doctoral candidate, was reported missing Sunday after leaving a party in the 2400 block of North Geneva Terrace.

Salvino’s cell phone was last pinged to a location near Diversey Harbor, police have said.

Salvino was a graduate research assistant in the laboratory of Dr. Lucas Pinto, according to a statement from Northwestern University.

Condolences to the family of Peter Salvino. What awful news to receive this time of year.

But what happened to him has happened to 11 young men in Chicago over the past year and a half.

Disappearances near a Chicago-waterway, leading to a missing persons report being filed, followed by their body being discovered days later, floating in the Chicago River, one of the lake's harbors, or Lake Michigan itself.

All incidents are eerily similar, (almost all young men, all gone missing while walking home from a bar, usually one in River North, alone, all later found drowned to death) yet there are no leads, and authorities don't claim they're connected.

I know the Chicago media and Chicago City Hall have bigger things to worry about, like bringing masks back, but with two bodies being discovered this month alone, it begs the question - are we dealing with a serial killer?

Here are just a few from this year.

- January 2022, 23-year-old Inaki Bascaran was found in the Chicago River after disappearing from a Halloween party at Celeste on Hubbard in October.

- April 2022, three bodies were recovered in just two days, two in the River and one in the Lake.

- May 2022 , University of Illinois Chicago students Daniel Sotelo and Natally Brookson were both found just weeks apart in Lake Michigan.

- May 2022, 31-year-old Eden De La O was retrieved from the river after disappearing from the city's Brighton Park neighborhood.

The list goes on but you get the point.

These are all occurrences of young adults, impaired from alcohol, but fully capable of making it to young adulthood, walking home alone from a bar or party, and then somehow winding up in the river or lake.

If this happened once it'd be a tragedy and I'd believe it if you told me they slipped and fell in, and couldn't tread water to climb back ashore, so they drowned. 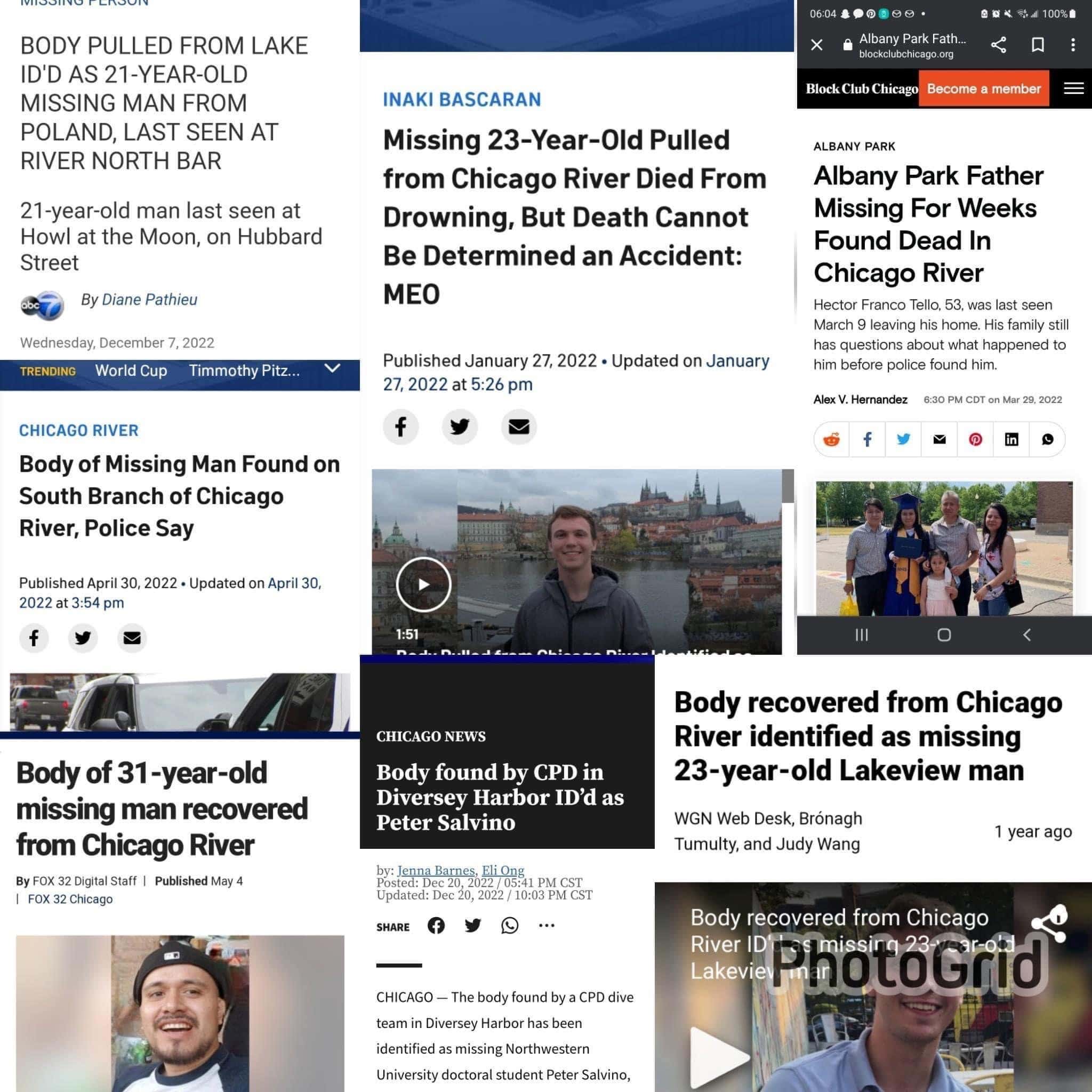 Authorities refuse to say they're connected. Chicago media has been mum. And our Mayor won't care about this until MSNBC extends her an invite to come on air to discuss.

Serial killing and Chicago go hand in hand. In fact, modern historians claim we invented it.

If you've never read Devil In The White City, order it on Amazon, or audible now, and listen over holiday break. Thank me later.

It's the embellished story of a notorious Chicago killer named H. H. Holmes and his serial killing in the 1890s, set against the backdrop of the Chicago World's Fair exhibition, and the architect responsible for constructing it, and the city, Daniel Burnham.

Of course everybody knows the name John Wayne Gacy and the sick killings he was responsible for in the 1970s.

And most recently, the FIFTY unsolved murders from the 2000's, where all the victims were strangled to death by, (obv) "The Chicago Strangler".

The part where this gets really fucked up, and downright scary, is where I tell you about "The Smiley Faced Killer" theory…

The victims are similar.

"3.5 and above star athletes,” said Gannon. “From as young as 17 all the way up to graduate students.”

The killers always leave a signature smiley face near the location of the body.

“I consider this the most dangerous domestic terrorist group in the United States today,” said Gannon.

In Chicago, they believe the killers have struck about a dozen times. It all starts the same way. The pair says the killers drug the victim with GHB, a date rape drug, at a location like a bar.

“We know how they dispense it; they have it already in a visine bottle,” said Gannon.

The killers then discreetly abduct the victim, hold them for a period, kill them and finally dump the body in water. Now, the investigators are revealing they've found other graffiti nearby the scenes.

“The best way to describe it is it gives away -- it betrays their primary or overarching philosophy about life,” said Gilbertson. Gilbertson will not elaborate on the other symbols found next to the smiley face, for fear of copycats. However, he says graffiti is unique to each crew in each city.

Gannon says they think they may have found the killers in Chicago.

“We found a group that we have pictures of that were wearing, displaying the same type of clothing, ideology, smiley face, the whole bit,” said Gannon. They basically fit the pattern of who we would be looking for.”

I hope that I'm wrong on this, and these are all just tragic coincidences (in which case, stop walking near the water when you're drunk and its dark), but if and when this story appears on Netflix' top ten as the true crime murder mystery doc of the year, remember where you heard it first. Barstool SPORTS.

p.s. - not trying to go fully out on a limb here, but it also appears our little brother to the north, Milwaukee, (home of Jeffrey Dahmer) is dealing with the same shit. Could the two be connected? They are only 90 minutes away after all.

OnMilwaukee - I've been warned in the past not to talk about a secret killer of white men in Wisconsin who prey on drunken, college-age males in order to find a way to drown them in the river.

I've been warned by police officials, editors and even some colleagues in town who admit although it's a well-known criminal theory that surfaces with each new mysterious drowning, discussing the matter in a public forum just doesn't do anyone much good.

After all, they tell me, there's no real proof and it just gets people stirred up over nothing. I disagree.

After the body of Nick Wilcox, a missing University of Wisconsin-Milwaukee, was found in the Milwaukee River last week, his friends and family who conducted a high profile search for months could begin to find some closure over his death.

According to police, there was no sign of trauma on Wilcox's body and the death was ruled as an accident. Yes, that's pretty much the case every time a college age white male goes missing in Wisconsin and later is found drowned in the river.

The same explanation was attached to the case of Thomas Hecht last year in Milwaukee when the 28-year-old went missing after a pub crawl downtown and was separated from his friends. He was found in the river about two weeks later after what police said was a night of heavy drinking.

Wilcox was separated from friends after a night of drinking as well. His friends and family were on local TV frequently during their public campaign with pleas that likely caught the interest of anyone paying attention to the media during that time.

Still, months later, his body ends up in the river and it's the first time anybody's seen it after all this time.

More than nine deaths due to drowning were reported in Wisconsin college towns over the past decade, many in or near LaCrosse. I've received messages from readers in that area who always insisted police in the area know it's the work of a killer but don't want to admit it or be accused of incompetence.